It was a sunny Sunday – the sky was blue, the grass green, the heat insufferable. It was just like any other Sunday, except it was not. Our legs are spent, our arms sore, our feet exhausted but our spirits, how high they soar.

Our hearts were violently pounding against our ribcages, almost like a tribal drum song, almost like an anthem. Decked in our navy blue shirts, we laced up our boots and straightened our spines as we swaggered onto the field. 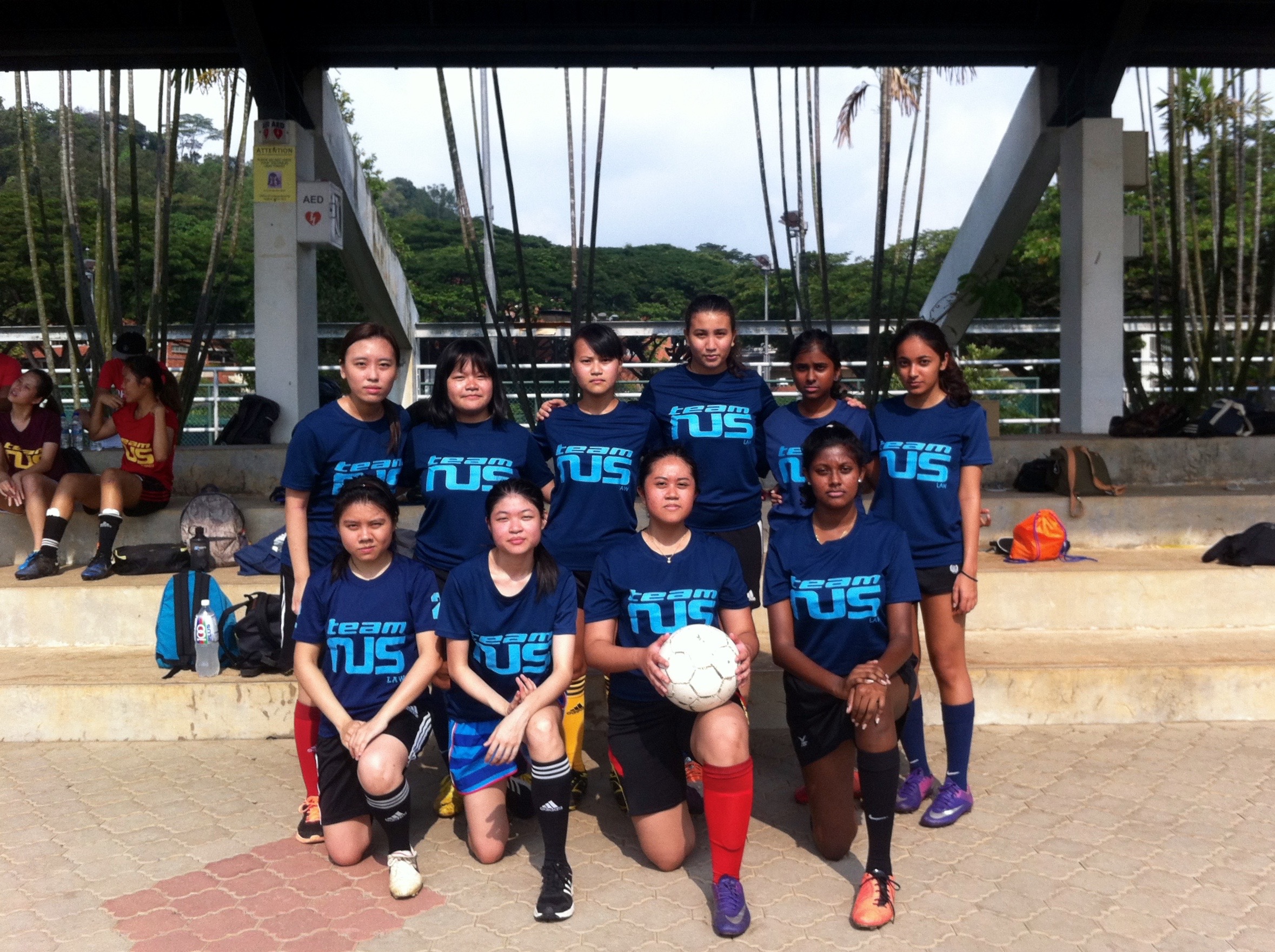 We were up against Science, Dentistry, Computing and USP. Despite being grossly under-prepared, overall we put up a fantastic fight and indeed gave the other faculties a tough run for their money. We began with our stretches and also a round of introductions as it so happened that it was the first time the full team was playing together. Having said that, we hit it off quickly and focused on working and supporting each other on field. As the fictional athlete Troy Bolton famously said, “getcha head in the game”. 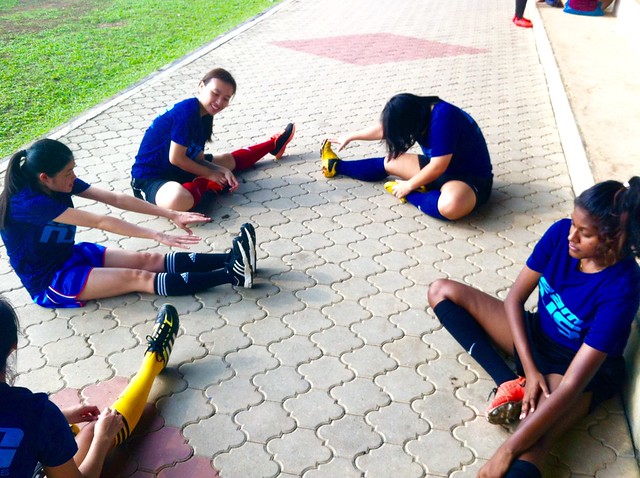 Prior to the IFG, we had a friendly match with Science. In retrospect, the friendly was essential in giving us a gauge of the level of “game” the other faculties possessed. Today, Science put forth their first bench and we put forth all we had and I am proud to report we managed to have some control of the scoreline. In other words, we weren’t trashed and actually put up a strong fight. Our game tactic was heavily defence-based and though I wished we had more defending functional drill trainings, it was honestly admirable to watch the girls cover each other’s positions when man-marking. It was so fluid and really reflected our team synergy. It was this cohesiveness that made our team a force to be reckoned with despite the dearth of trainings and practice sessions. 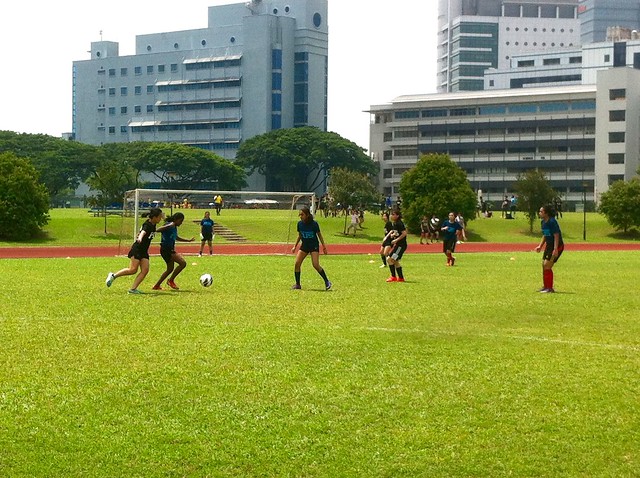 Dentistry proved to be an easier match as compared to Science and overall, I would say we played a better game though ultimately conceding one goal. The possession rate was pretty levelled and there were several moments when a goal could have materialised from our side. The rain too decided to spectate the match but we played on. Sweat and rain were on our backs but our eyes were fixed on the ball. This was also the crucial match where we truly recognised each other’s strengths. Trix (Year 2), blessed with long legs, proved to be extremely skillful when she made the bursts of sprints down the opponent’s line. 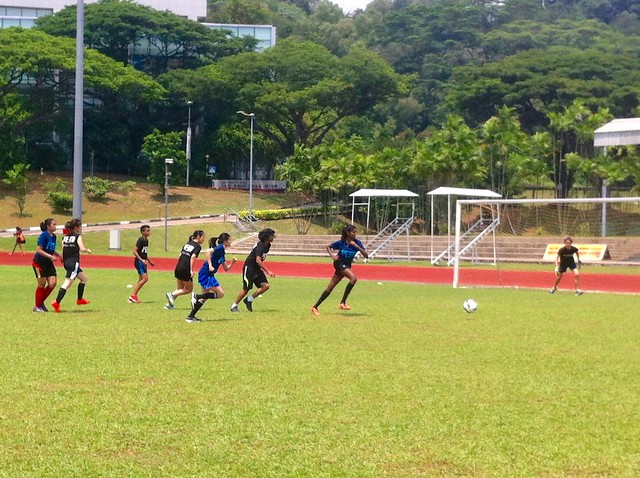 There were several instances especially during the match against Computing when our girls displayed moments of true genius and talent. The Computing girls, all black from head to toe, looked like jaguars that were ready to pounce at the first sense of fear. Things got personal real quick when one of them hollered, “ are you guys ready to lose?” I would highly recommend a quick Google search on the definition of ‘sportsmanship’. That spurred us on to fight harder. Jamie (Year 2) may seem like a gentle and sweet-tempered girl, and she probably is, but on field she’s like a swift fox deftly tricking defenders. I saw with my own eyes when she managed to manouvre past two defenders — I dare say it was better than any I’ve seen on TV. 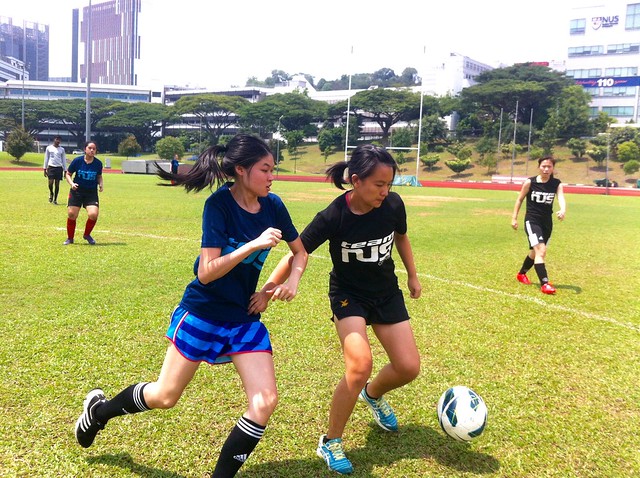 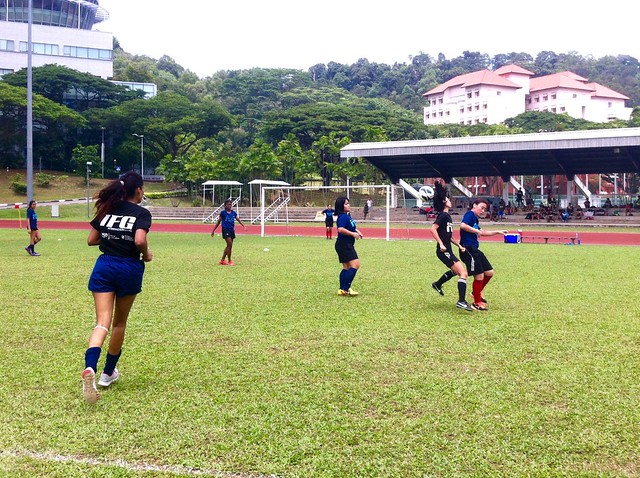 During the second half of the match, Computing seemed to focus all their efforts on attack so when we cleared the balls, they were earned several corner attempts. My contribution to the team was in trying to hold down our fort, namely our goalpost. There were some saves and there were some when I could have done better. In this area, I would like to commend the effort of my fellow team mate, Sheiffa (Year 1), who courageously took up my role in the matches where we switched around and I played forward. 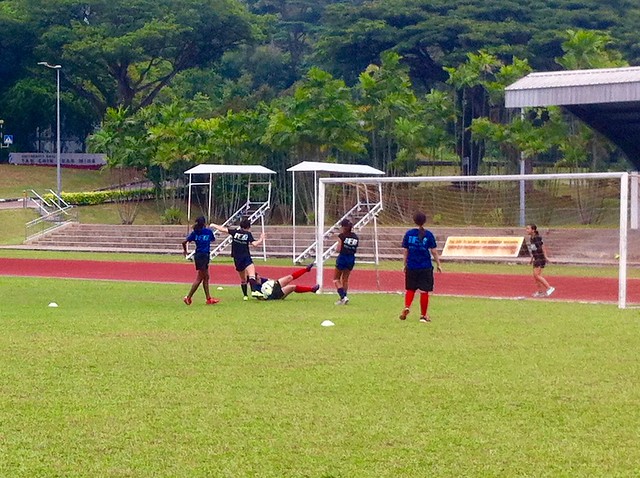 Towards the end of the day, the team suffered various injuries though that did not hinder our team spirit as everyone remained optimistic. When our teammate, Anu (Year 4), had her boots threatening to disintegrate, we salvaged the situation and used the sports tape to secure her boots. Crisis averted. 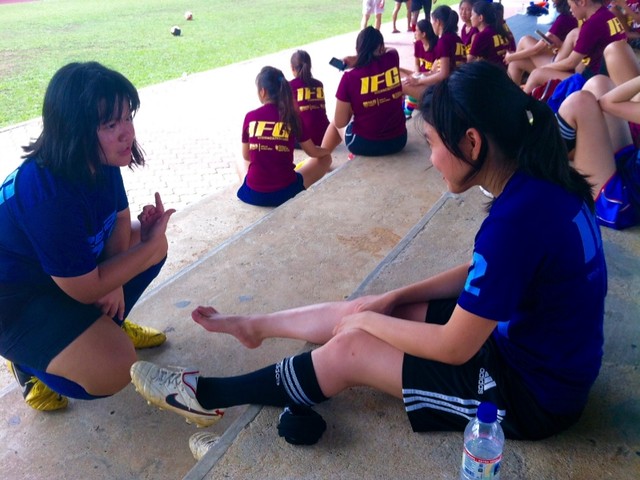 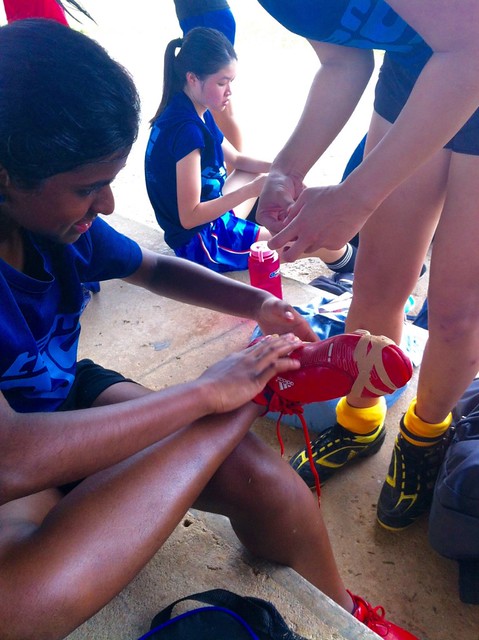 Overall, our girls put up a very strong and laudable fight. Had we started our preparation and trainings a lot sooner, as most faculties did, I strongly believe we could have easily won the matches today and progressed on to the semis and perhaps even finals. Maybe that’s only wishful thinking on my part but what I know for a fact is that the effort put out today rekindled in all of us our passion for football and reminded us of just how much fun it is.

For those who are keen to join us, soccer clinics will be held every Thursday. Do contact our captain, Callie, at 8121 2789 for more details.