The much anticipated men’s soccer match between the NUS Law and NUS Medicine team kicked off at the Bukit Timah Campus Upper Quad  on the 23rd of February and Justified is here once again, to bring you the latest report.

The weather was good and the pitch was relatively dry. It was a great day for a soccer match and supporters from both sides were entertained with a wonderful pre-match performance by the Medicine Faculty. 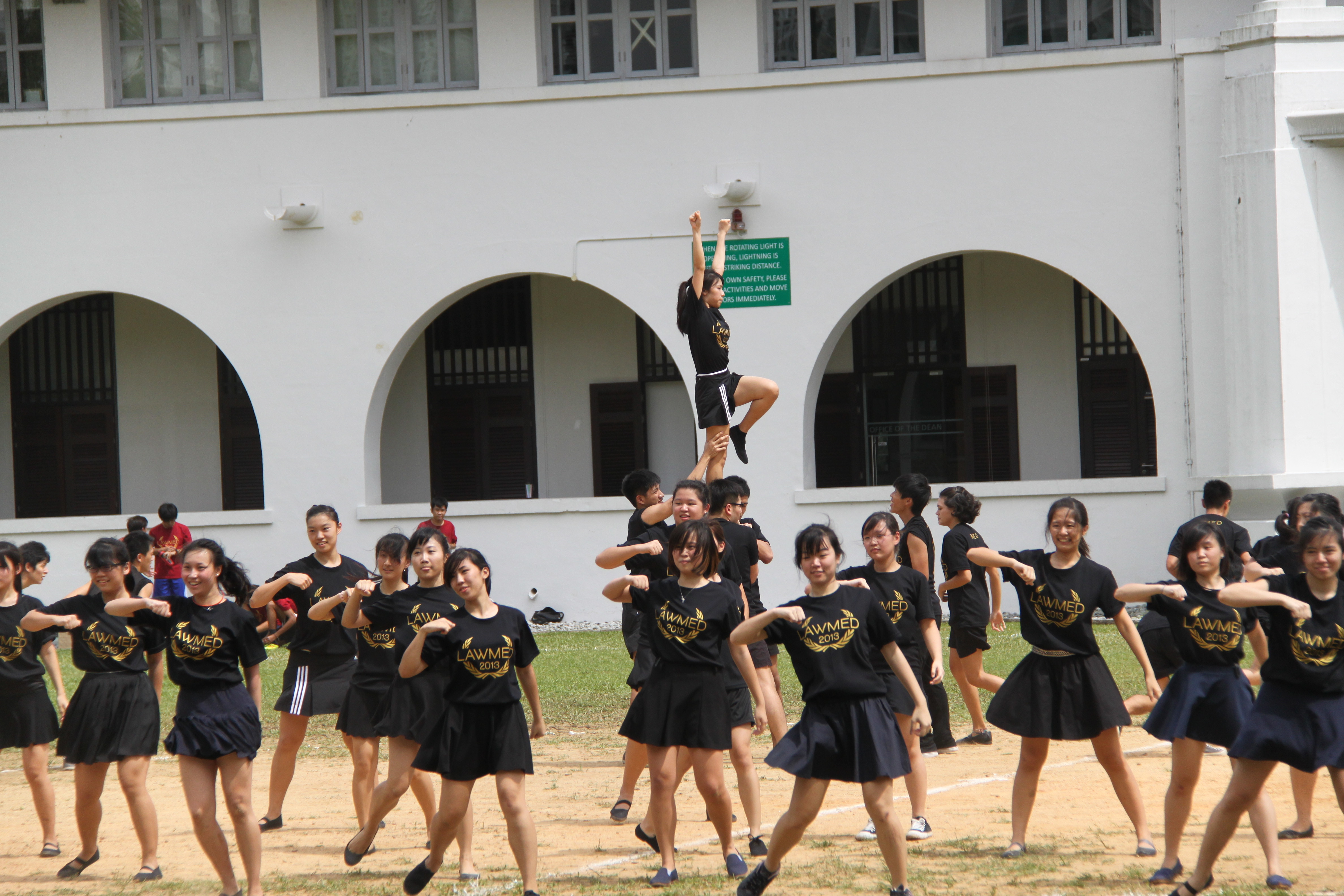 This match was a real nail biter (no kidding!). Given that Team Law had lost to Medicine 2-0 the previous year and the fact that it was mathematically impossible for us to win the LawMed Games (we were 4-7 with 2 events left to play for). Our players were determined to show what they were made of and went into the game hungry for victory. 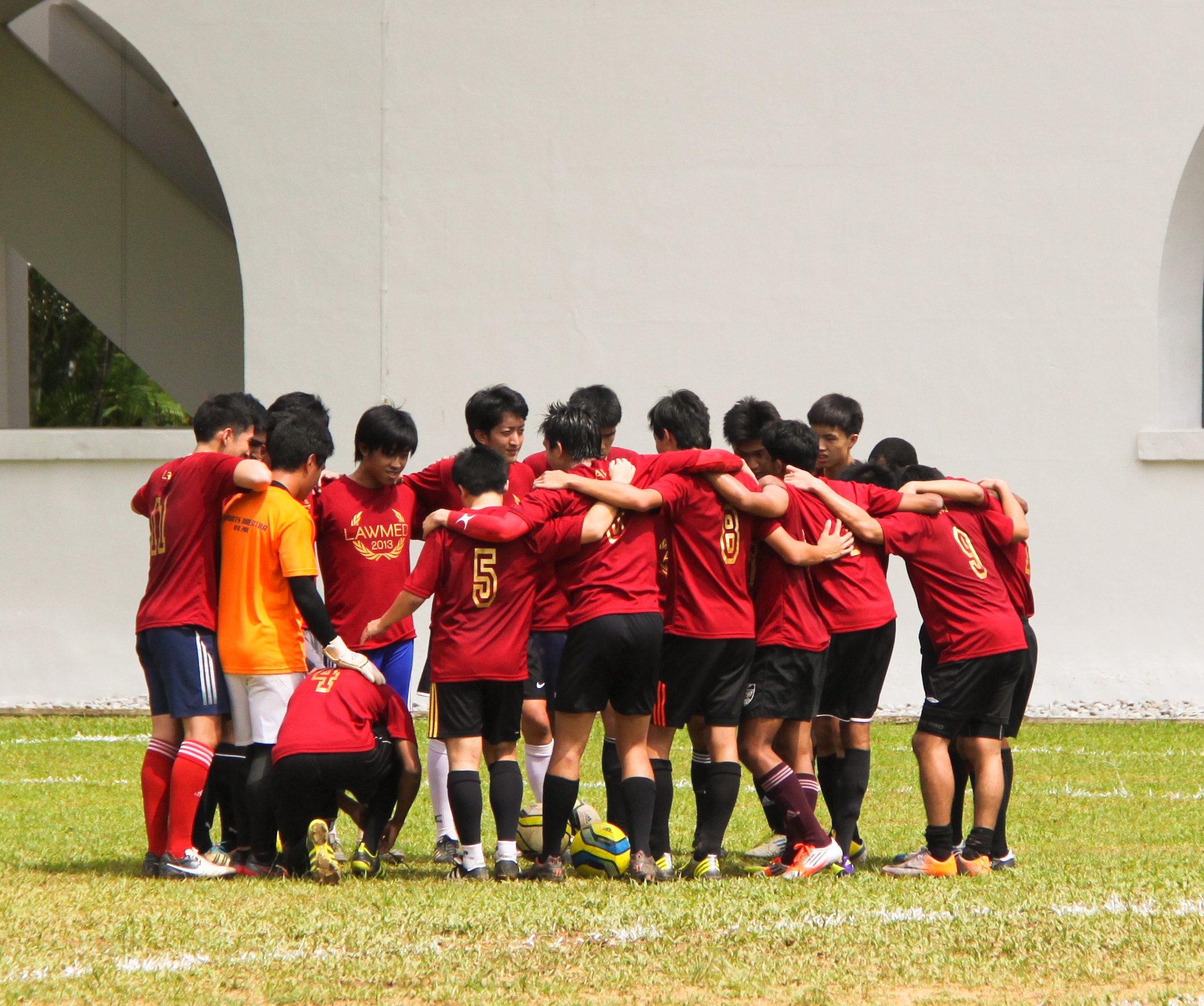 Both teams started off very aggressive – players from both sides ran for every loose ball available and made crunching tackles to gain possession for their side. Things were messy, but got even messier as time kept ticking.

Although both sides made attempts to score, the 1st real attempt only came in the 12th minute when Team Medicine took a shot at the top right corner of the goal, only for the ball to be parried away by the formidable Team Law goalkeeper, Eddy Hirono (Year 4). 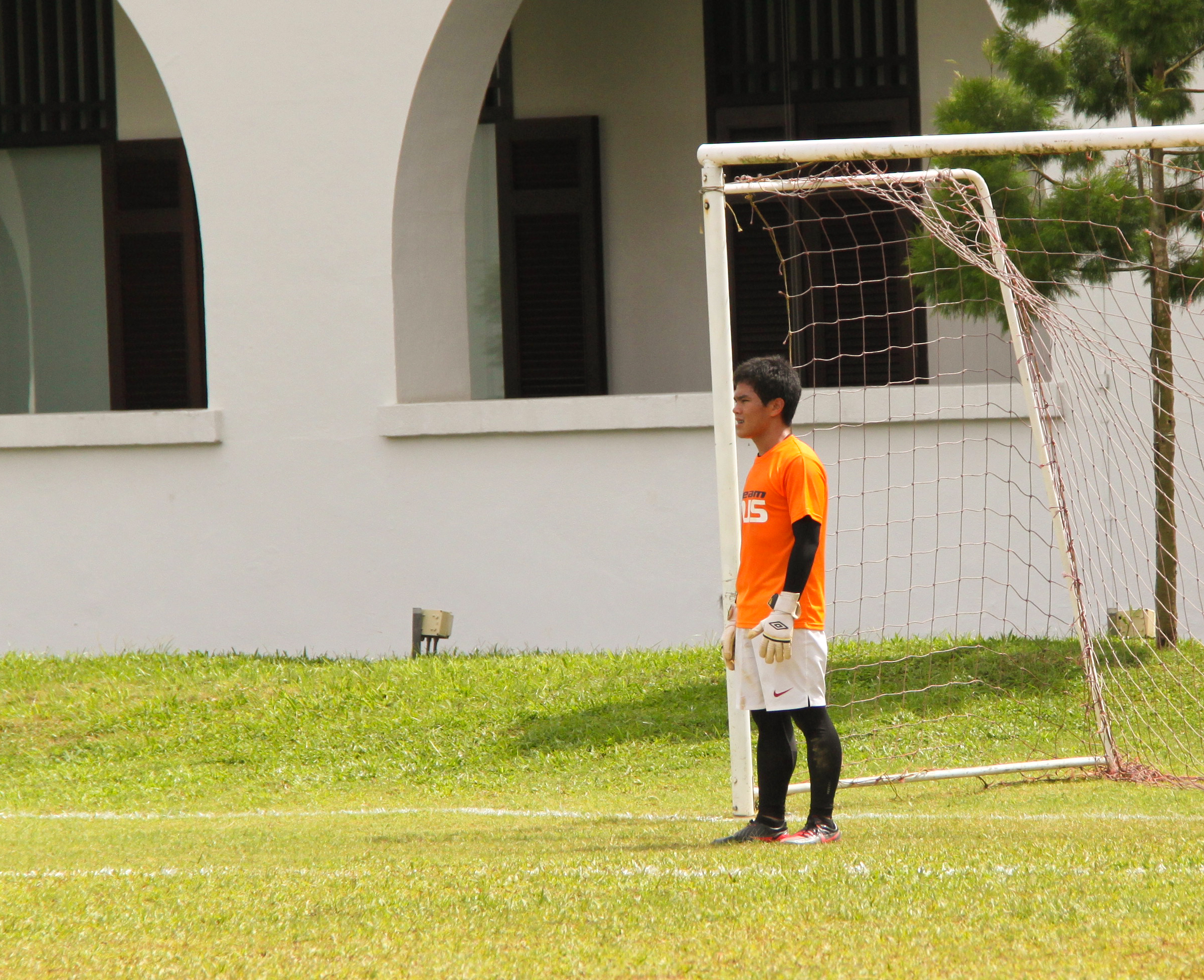 Both sides continued to barrage one another with shots, but to no avail. It was only until Team Law was awarded a freekick in the 17th minute that the deadlock was finally broken. The freekick was taken by none other than Team Law’s Sudhershen. Even with a human wall formed right in front of him, he made it seem easy as he unleashed a curler that would have made David Beckham proud. The ball landed near the bottom left corner of net, giving the Medicine goalkeeper no chance to save it. 1-0 to Team Law!

Team Law was given the opportunity to double the lead in the 23rd minute when the players found a gaping hole in the medicine defence with a good cross. However, the ball only managed to find its way to the right of the goalpost. 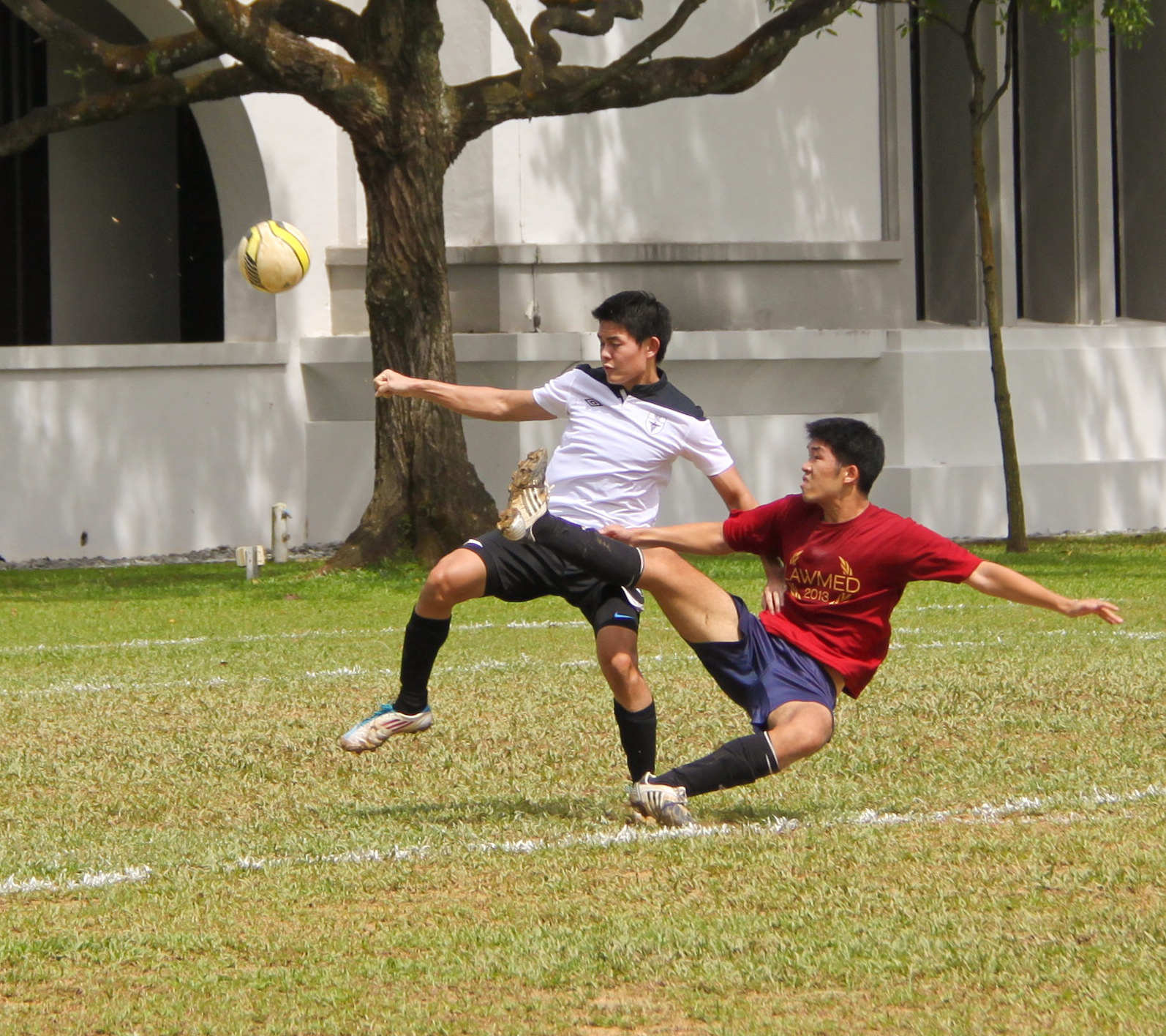 Team Medicine too, were given many opportunities to equalise, most notably the freekick effort in the 34th minute, but once again the ball just landed into the safe hands of Eddy. Both teams continued to try, but either lost possession halfway doing so or the ball just flew all over the place and out of the Quad boundaries. This continuous motion carried on all the way until the whistle was blown to indicate the end of the 1st half. 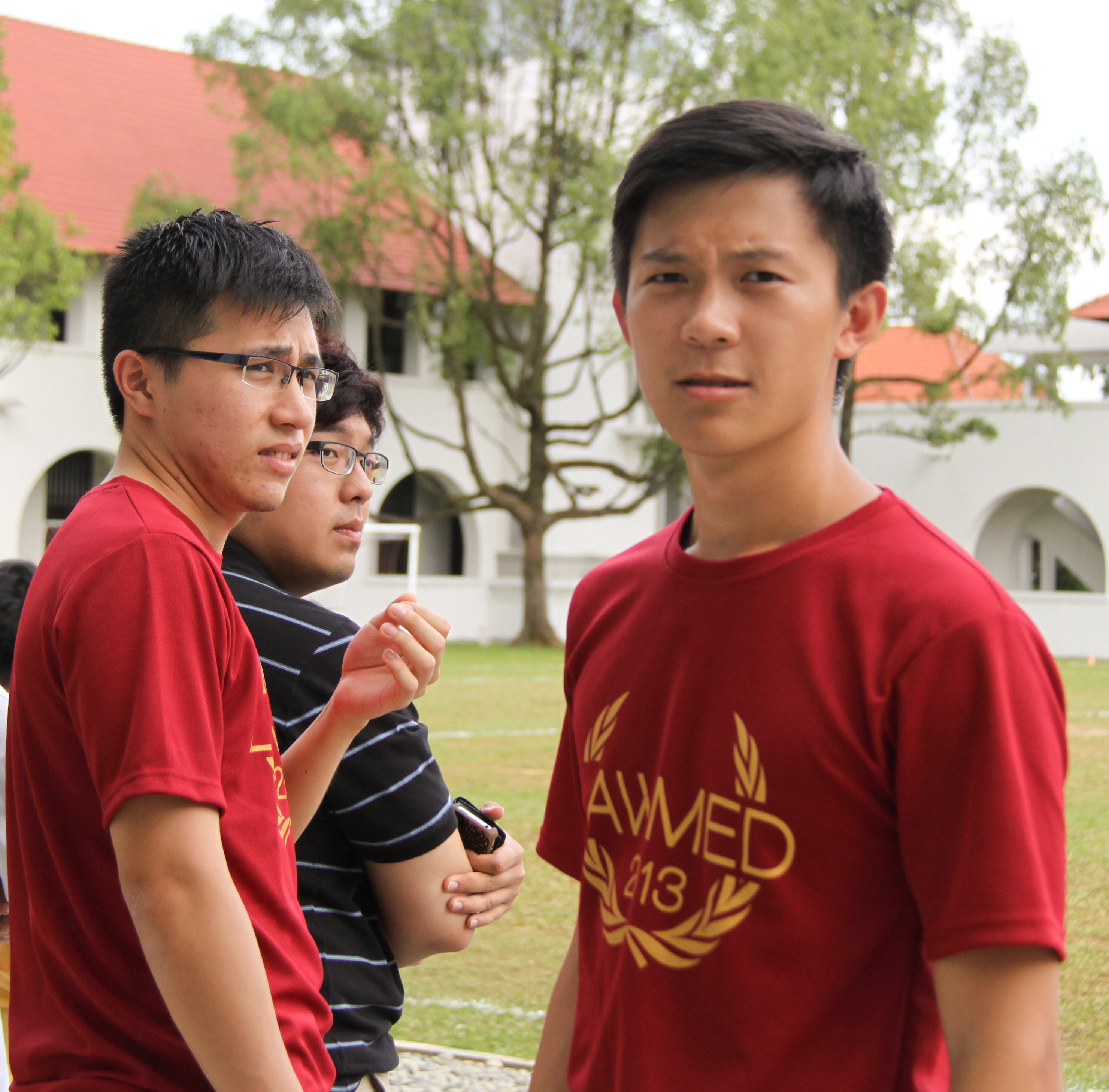 What do you mean, first half already?

Both teams were visibly fatigued as they started the 2nd half. Nevertheless, they continued to pressure each other and Team Medicine even had a good opportunity in the 42nd minute after an excellent cross was delivered to the middle of Law’s penalty area, unfortunately, there was no one in the position to finish it off. 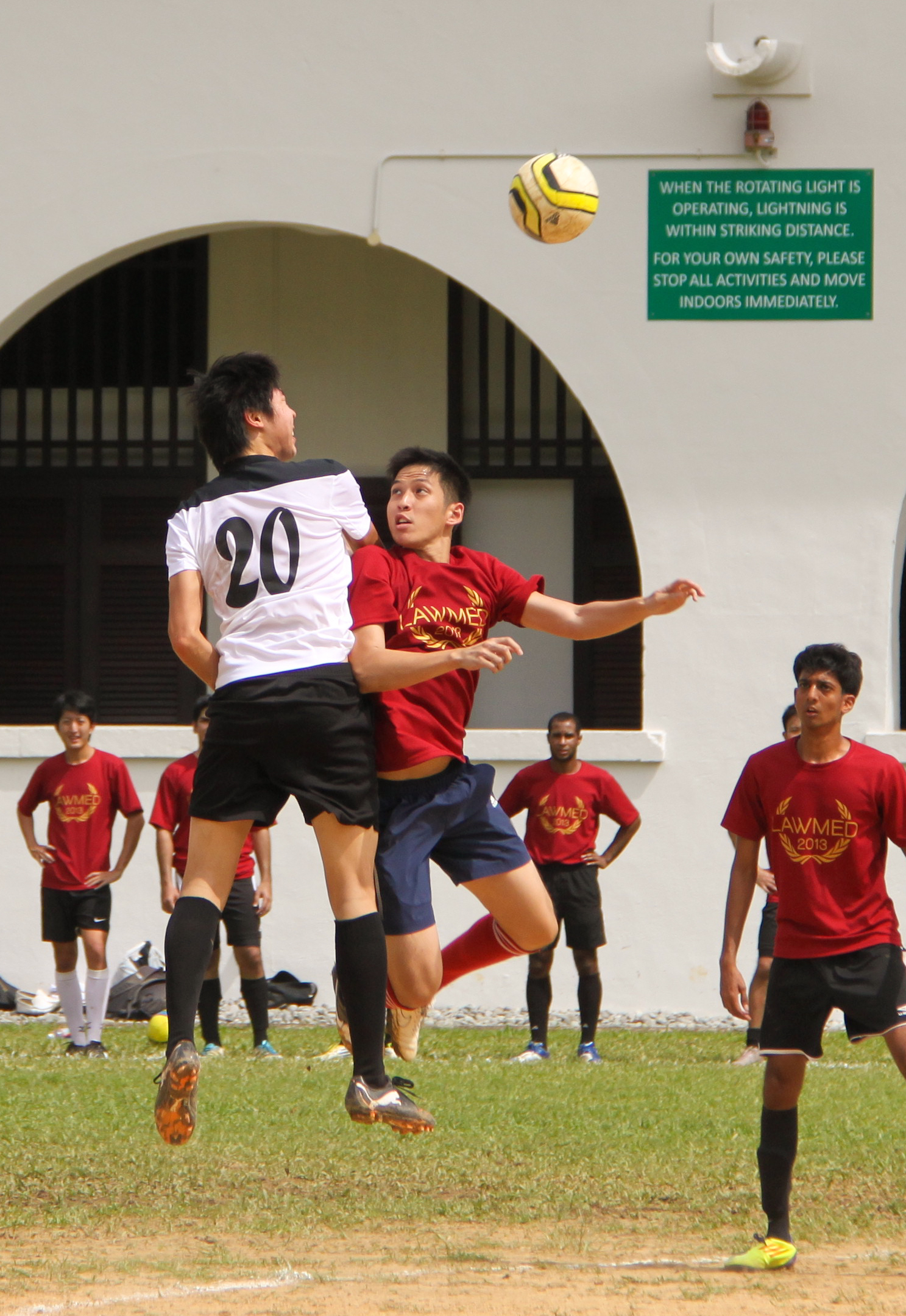 It was evident that Team Law were the more aggressive team in the 2nd half, passing the ball around and moving it forward before shooting at goal. Team Medicine, however, were quick on the counter attack, and made a variety of good crosses to the left flank to force the Law players back to defend.

Team Law were persistent and were awarded in the 59th minute when a good through pass was made to Mohammed Shafiq, who calmly controlled the ball before slotting it home with a low drive towards the left. 2-0 to Team Law!

Both teams continued to make really good runs and attempts but both goalkeepers were quick on their feet to deny the opposing team from scoring. Team Law had a good attempt in the 70th minute with a shot aimed at the bottom corner of the goal, however, this too was saved by the efficient Medicine goalkeeper. 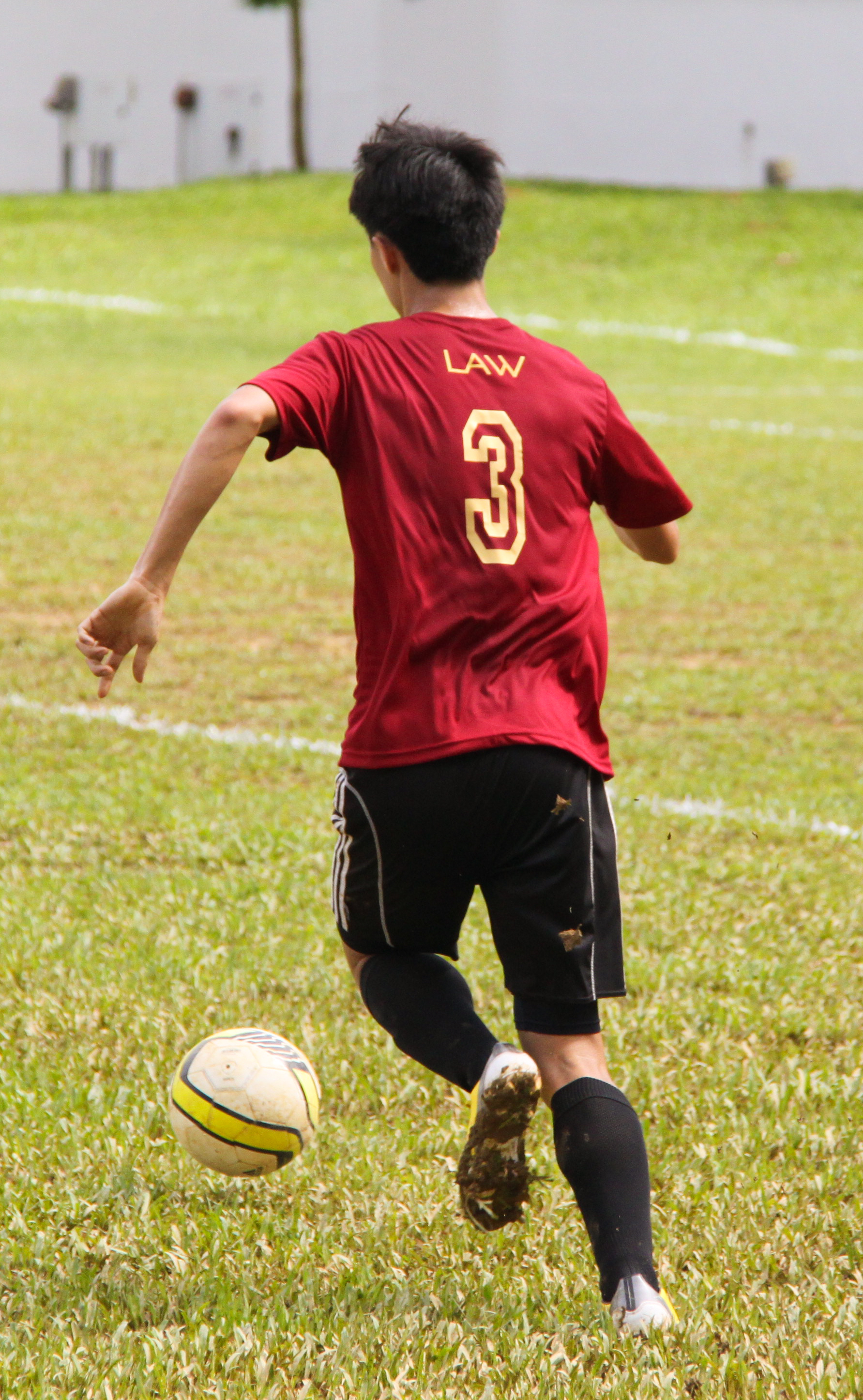 Team Medicine continued their quest to score a goal with several good crosses into Team Law’s penalty area. However, the Medicine players would either be caught out of position to score or miscalculate the angle or strength needed to land the ball at the back of the net. They didn’t give up, and they almost scored in the 78th minute when one of the players smashed a sweet curler towards the goal, only for it to be blocked once again, by Eddy! 2-0 was the final result after 80 minutes of gametime. Both teams clearly gave it their all, but NUS Law was the team that emerged victorious. 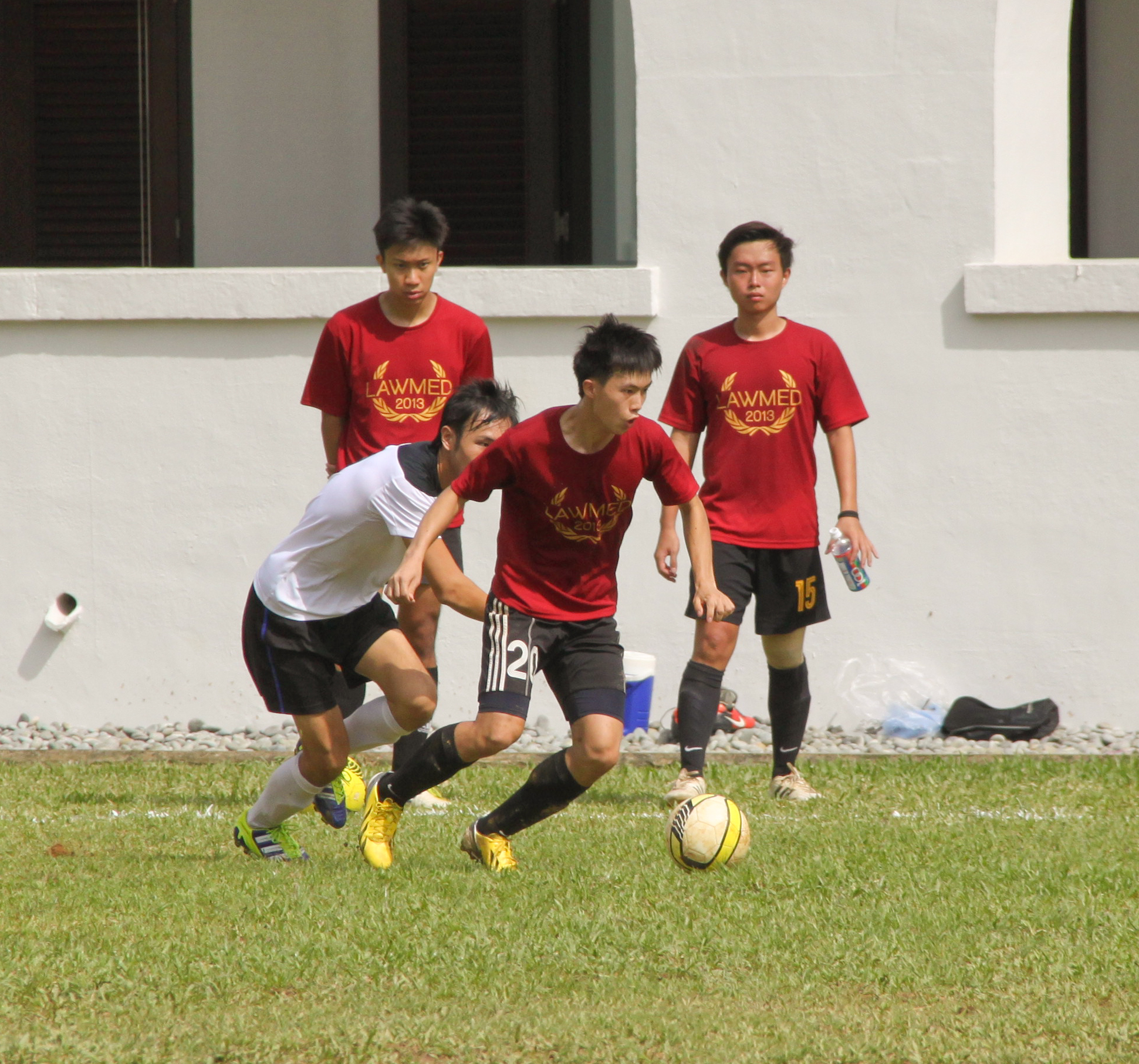 After the match, we sat down for post-match interviews with both sides. First up, we spoke with NUS Medicine Captain, Suren.

Justified: It was an exciting match, I thought you guys did really well and really gave it your all during the match. How do you guys feel about this match?

Suren (NUS Medicine Captain): I felt that what our team lacked today was finishing. I thought my team had a lot of opportunities but we just didn’t take them. We failed to convert many shots to goals and I think that was our main problem this game. The NUS Law boys played really well too!

Justified: Thank you and I wish you the best in any upcoming matches!

After which we interviewed Hari Veluri (Year 2), the captain of the NUS Law Team

Justified: Congratulations on your victory! It was a great match between both very strong teams! What do you think made such a victory possible?

Hari: First of all, the team always feels at home when we play in BTC. We feel that the school is always cheering for us when we play on home ground and that really motivates us to give our best to do the school proud. Next, I feel that the team had really played very well, we had good teamwork and we took our chances and won. I feel that we have a great team and it was unfortunate that we did not win the IFG competition, but I hope that we can continue this winning streak and hope that the players continue to give it their best in the incoming year, even when I hand over the captain’s armband to the next captain.

Justified: That sounds great! Lastly, who do you feel was the best player in your team today?

Hari: Actually I thought the whole team played well, but if I were to choose a best player, it would be Sudhershen.

Justified: Alright, Thank you Hari! Congratulations on your well deserved victory once again!

We would like to thank all the NUS Law supporters that came down to support our school today. We would also like to congratulate the NUS Law Soccer Boys on their victory and wish them all the best in their upcoming matches. 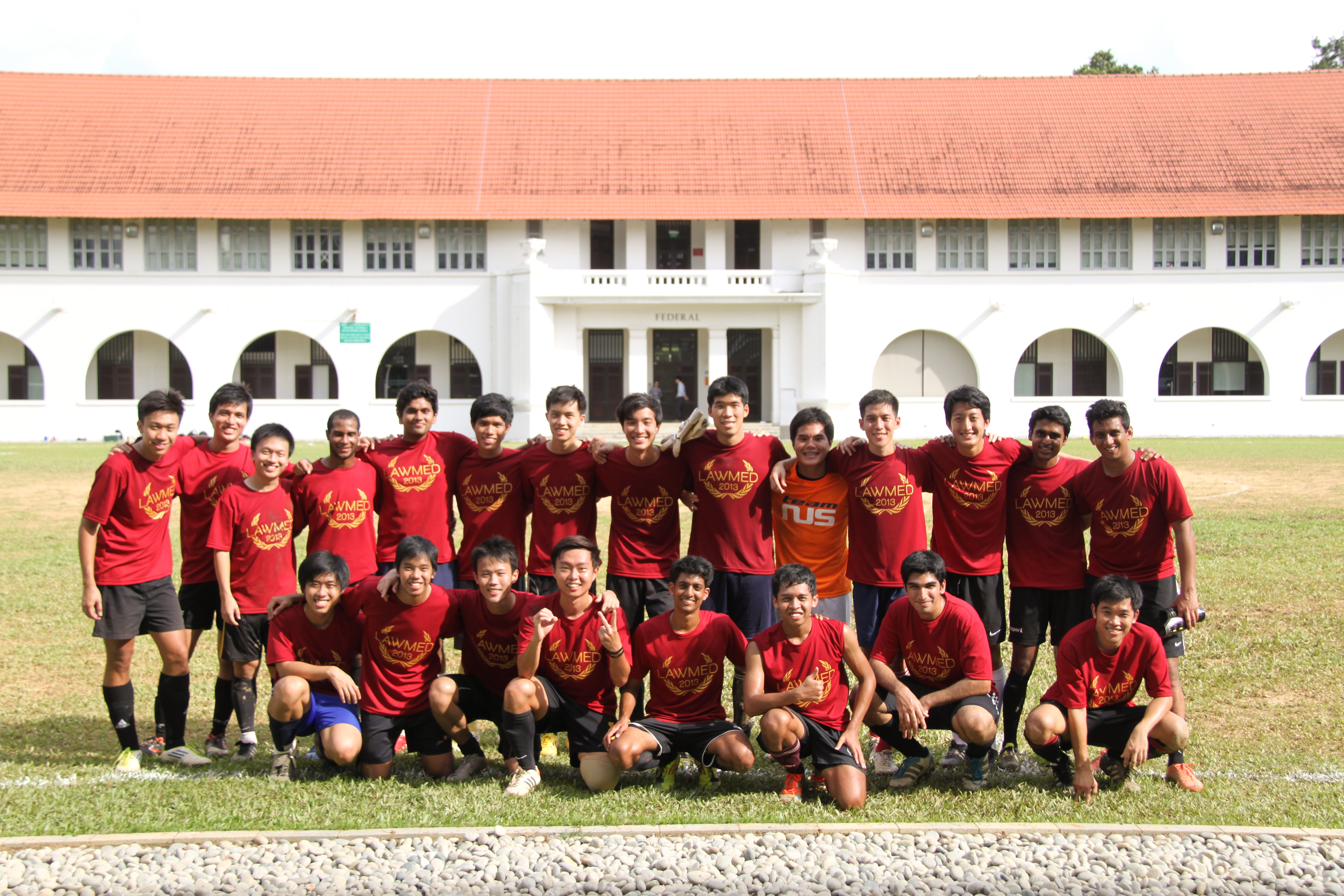 It was a game that every law school player would be proud of. After having countless training sessions (some involving a fair bit of physical training) and playing a handful of friendlies, everyone was really looking forward to the lawmed game. We knew we had already lost the LAWMED games overall but that did nothing to dampen our spirits. We were playing to restore the pride of law school football, especially after a dismal display in the Inter-Faculty Games last semester.

Right from the first whistle, things did not fall into place for the medicine players. Our plan was simple. Press them hard and high up their end of the pitch. Do not give them any time on the ball.  All our players put in a lot of effort to fight off the stifling sun and hound the medicine players, making it difficult for them to get their passing game going. As a result they were unable to get the ball under control properly and kept knocking it out of play unnecessarily. Every one of their mistakes was followed by a strong cheer from the crowd and this was really encouraging for our players.

I must say that our team gelled very well as we each ran our lungs out, knowing that those waiting to come on would put in just as much effort. We had a very good squad overall so there was no reason for anyone to conserve any energy.

Our two goals came from a free-kick and a counter attack. In my opinion they were not fortuitous at all. After a brilliant free kick by Sudhersen, our defenders were rock solid at the back. Medicine then pressed further forward in the second half and left their defence exposed, leading to our second goal.

I will admit that medicine probably deserved to at least pull one back in the last ten minutes as we struggled a bit with their crosses. However, the script seemed to have been already set. Our players showed tremendous spirit and a strong determination not to concede.

When the final whistle blew, a sense of jubilation was felt all around the upper quad. It was a great feeling to win. I think what won it for us was the fact that we were a very bonded squad (including exchange student Timothy Busropan) and so we could field any combination of players without any chemistry being compromised. I am very proud of my players as each and every one of them put in a good shift. I want to thank the fourth years who played with so much desire for their last LAWMED game. Also, special thanks to everyone who turned up to support us. Your cheers filled us with determination to go the extra mile.