The morning of the 17th of September must have been an awesome, lazy Saturday Morning for most of you (since it’s the start of Recess Week and all), but not quite for the 7 teams of people that participated in the preliminary round for the Rodyk Challenge!

Perhaps your impression of the Rodyk Challenge is something along the lines of “oh, it’s just another moot competition”, but well, it’s actually some quirky moot-debate-hybrid. Teams of 3 present a solution to a problem, and face questions (or Challenges) from an opposing team, as well as the judges (Prof Rannald Or, and two other lawyers from Rodyk & Davidson LLP). Think of the Rodyk Challenge as an encore of Project Work from the Days of the Good Ol’ A’s, with a slight legal slant.

The problem posed to us (yes, I wonder what had possessed me to choose countless hours’ of editing Powerpoint slides over my growing mountain of school work), related to the impending problem of energy in scarcity in Singapore. A total of 7 teams were formed – one comprising of Year Ones, another with Year Threes, and the rest from Year Two. How will the competition eventually play out? 2 teams will be chosen from the Preliminary Round, and they will meet at the NUS Finals. The winner of that round will then have to carry the burden of upholding School Pride by going head-on against the best SMU team in the Grand Finals!

While most of us were probably in it for the $$$ (come on, $3000 for the team if you win at the Finals, and $6000 more if you win at the Grand Finals!!) rather than genuine interest in the Energy Affairs of Singapore, I guess that the preparation process for the competition didn’t disappoint. At first, we (Jasmine and Yee Keong were my team mates) felt that the whole PW-flavour of this competition was pretty weird, and we were wondering whether we had made the right move by subjecting ourselves to extra-curricular torture. Late nights were spent on editing the 3000-word report, and even more nights (even Sunday nights, much to our dismay) were spent on discussions and practices at our beloved Block B. But I think we still managed to have fun during the process. There were many times where we went “Wah, Singapore got this ah? I didn’t know that!”, and it was all quite refreshing a change from the usual humdrum of Law Readings and Tutorials… It was nice because we also became better friends during the course of all of this. (: Though we got eliminated, I don’t think we regret taking part in this for the experience!

Best of luck to all the finalists!

Do come down for the NUS Finals next Wednesday (28th September 2011) at the Moot Court if you need a break from work and support your schoolmates! (: 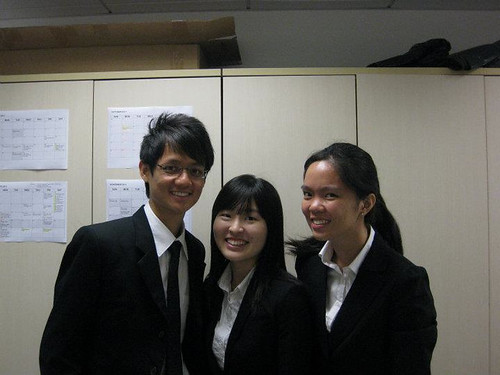 Yeekeong, Jasmine and Kristy - one of the 7 participating teams