Except for the change of name from LAWR to LARC, much remained the same; excitement was high for Rodyk Moots. The top 10 contestants were handpicked from the year one cohort. The judges for this year’s competition were Kirindeep Singh, Lok Vi Ming, SC and Paul Wong from Rodyk & Davidson LLP.

The judges with furrowed brows and all kinds of expression and tone, asked questions that threatened to tear apart the mooters who were already managing their own streaks of nerves. They not only bore the title of being the ten chosen ones, but they also had to present their case in front of their attentive peers. Yet all of the mooters demonstrated excellent skill, making them truly deserving to be the chosen ones. 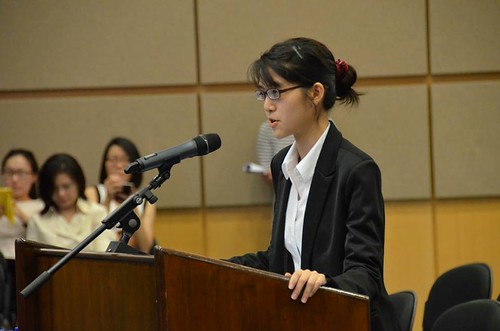 First up was Charlotte Wang who was aggressive, emotive and stressed on the right words. She was definitely not afraid to reject the judges with a straight “no your honour” before proceeding to quote from the right section. As the most polite mooter, she peppered her answers to tricky questions with numerous “thank you, your honours” which is probably her secret to excellent mooting. 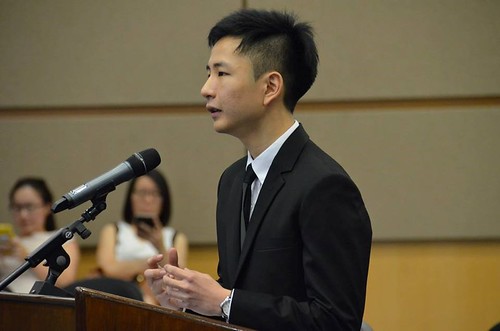 Second to present was Mark Teo whose voice was alluring and calm, almost like a smooth lullaby. He kept his calm throughout. When he was asked a specific question, he wittily replied that it was indeed a question which the respondents had asked themselves- a smart way of affirming the judges. 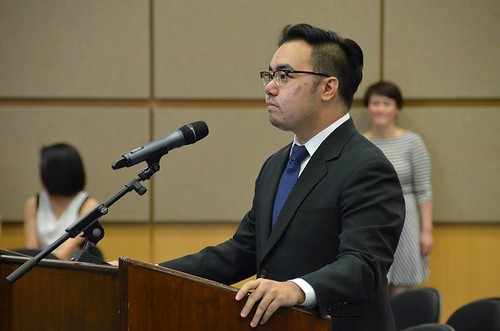 Third was Michael-no-neck-Chan. The judges bombarded him with questions that were difficult to answer even they were regarding non-legal issues. They asked “how do you expect a 5 year old to know that their mother is the best thing for them when adults don’t?” While this incited some laughter from the audience, Michael answered unblinkingly. He played on the rule of three, or more like rule of five, with his repetition of “it’s the appellant” of about five times or so. 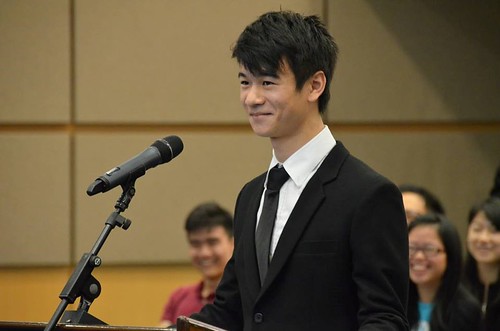 Even before Kai Tai’s moot began, the judges asked if he tendered new authorities because of deficiencies in his case. To which, Kai Tai replied “to anticipate your questions” without a slight bit of hesitation, inciting excited sniggers from the audience. He had an extensive use of fingers, hand gestures and he even refused to use the microphone, something which we did not even know was possible.  He was certainly the most dramatic and funniest mooter of the day. 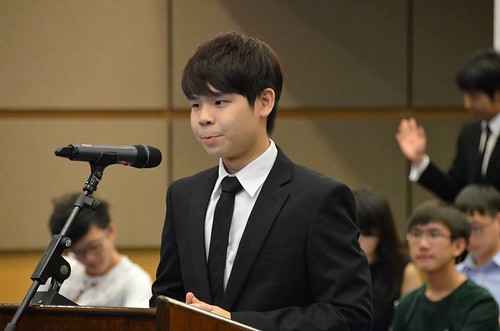 Joel Lee had such a clear voice with quiet confidence that it felt like an extremely persuasive storytelling session. The judges claimed that they knew a little about MRT construction and got the audience lost in the question about whose house and whose cracks it was, but Joel was undeterred and answered with ease. 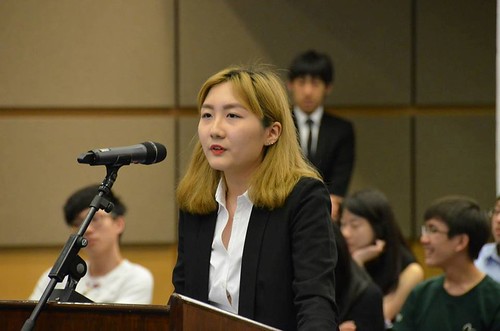 Venessa Phoa, “phoa spelled p-h-o-a” captured the judges’ attention with such a unique opening statement that they could not resist but referred her as “Ms Phoa spelled p-h-o-a” for the first question. Her soothing voice captivated the audience, along with her boomz bright ash-blonde hair and a pair of killer high heels which made her easily the most fashionable mooter. 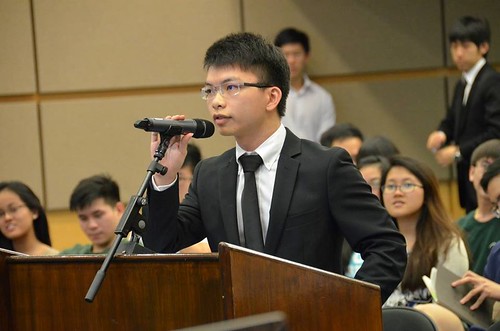 The next to present was Poh Yee Shing. Throughout the first half of the moot, he maintained firm eye contact with the judges and managed to recover swiftly from the judges’ difficult questions. He answered with ease as he juggled answers about various jurisdictions, from UK to Canada to Singapore while being supported by his OG’s huge turnout. 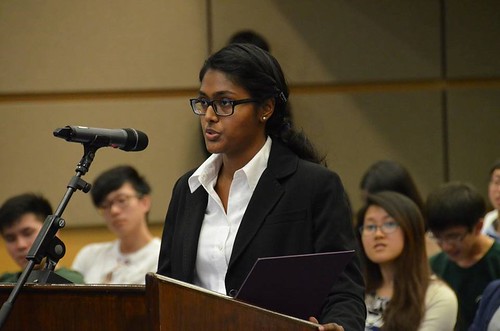 Rodyk Moot Winner —Samyata nearly forgot to please the court with her opening statement but managed to not only please the court, but pleased the court the most with her outstanding performance. She nodded her head to every question that was posed to her, and even questioned the judge if her reply answered their question. Now that is only something that the Rodyk Moot winner can pull off. Her excited OG fan boys and girls screamed wildly for her when she was announced as the champion. 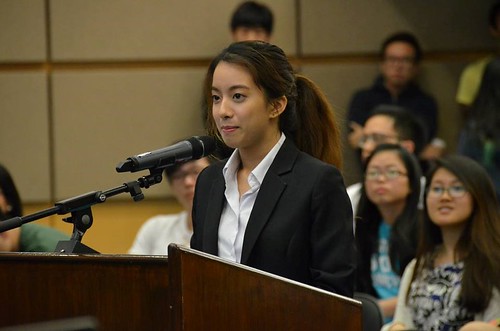 Rodyk Moot Second Runner Up — Claire Yang had this sweet, melodious voice that captured the hearts of everyone in the moot court, and by everyone I mean the judges too. She had to repeat her conclusion “if I may not be of any assistance to the court” thrice before she was finally released from the podium. When the judge asked a question about receding hairline, Claire could not help but laugh along with the audience. Her charm was not only limited to mooting as she is also well-known for her passion as a dancer. 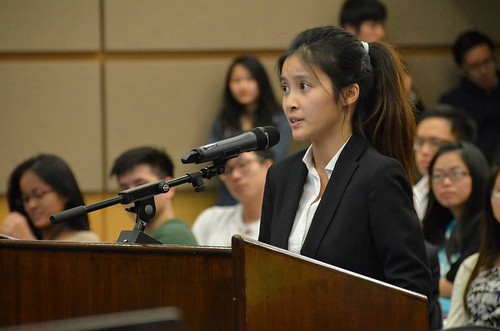 Rodyk Moot First Runner Up —Dana did not falter when she was bombarded with several questions that essentially focused on similar issues. She also happened to be one of the finalists of Law Pageant and is a fine example of how one can have the looks and also the brains and ability to moot. She had the best shocked expression which I have seen in awhile, with humongous eyes wide open and her mouth in a perfect O-shape when the results were announced, much to her delight. 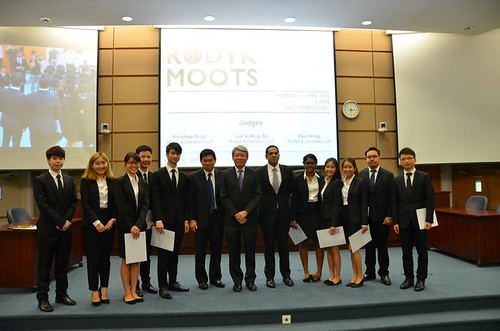 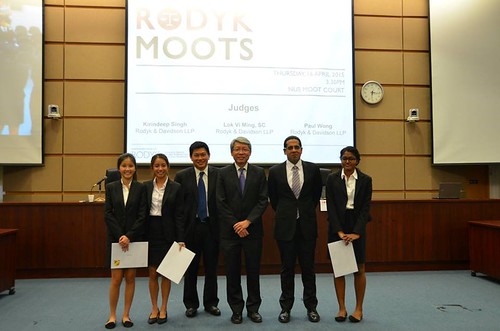 Top three winners with the judges.

It was indeed an eye-opening and enriching Moot competition after which the year ones along with the rest of the Law school were treated to an extremely tasty BBQ party also sponsored by Rodyk.