“If the facts don’t fit, the court should acquit”. If this sounds familiar, you were probably at the Advocacy Cup Finals on 3rd April. And if you weren’t, it’s a good thing you’re reading this article.

The Advocacy Cup, organised annually by Drew and Napier, represents the pinnacle of mock trial advocacy, pitting the quickest wit and sharpest tongues against each other. Add to the mix the exciting cross-examination of witnesses, and the outcome is a fiery yet thoroughly engaging spectacle. 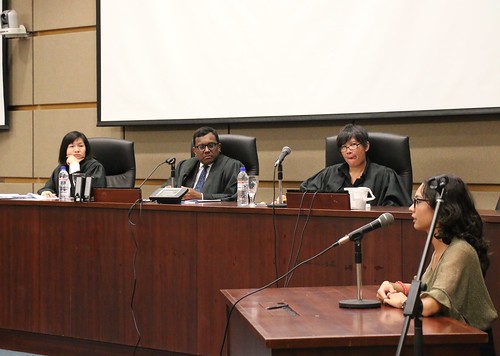 This year’s competition did not disappoint, with the hypothetical involving the charge of murder (under s 300(b)) against an adopted daughter, Idina Killim, of her father, Bob Loh. Idina was a singing sensation, while Bob, a haemophiliac, provided the lyrics to her music. The question was: Did Idina kill Bob by slicing him on his arm? Or had Bob committed suicide? The facts did not point conclusively one way or the other, so it was up to the competitors to convince the fact-finders. And those fact-finders were none other than the judges themselves.

The Bench this year comprised of Justice Vinodh Coomaraswamy of the High Court, Professor Eleanor Wong of NUS and Ms Blossim Hing, Director at Drew and Napier LLC. With judges of such illustrious standing, the participants would need to be at their best to impress.  The two rounds both featured a battle of the two schools: NUS v SMU. In the first round, Christian Teo from SMU for the Public Prosecutor faced off against Lye Yu Min from NUS for the Defence. In the next round, the roles were reversed; Kelvin Chong (NUS) represented the Public Prosecutor against Sui Yi Siong (SMU) for the defence. Who would reign supreme? 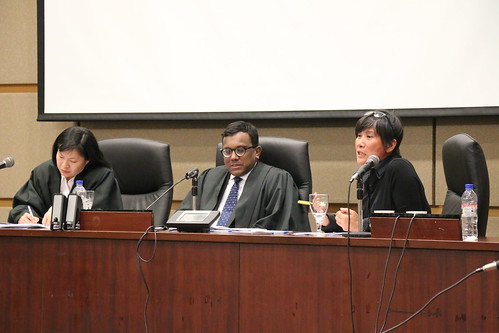 The first round featured two competitors with a penchant for flair. Christian showed his adeptness at making use of the facts, ending strongly during his cross-examination. “Blood never bothered me anyway” was the last line to the song written by the Accused in the mock trial problem, and it was precisely this line that he asked the Accused to recite in his conclusion. The audience was clearly impressed, judging by their nods of approval. NUS’ Yu Min was not to be outdone though.  With the unflappability of a seasoned rapper, he broke out the line mentioned at the start of this article, much to the audience’s delight. Aside from these nuggets of inquisitorial form however, both Christian and Yu Min demonstrated a clear grasp of the facts of the case. Whether this would be enough, however, would depend on the performances of the remaining participants. 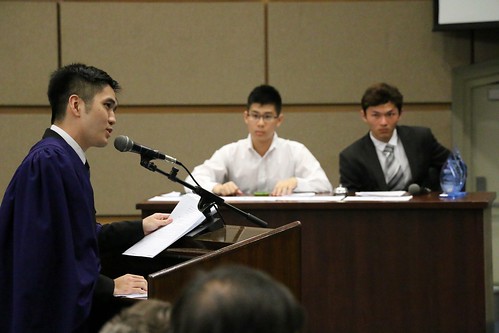 (At far left) Lye Yu Min of NUS at the lectern

The next round featured a clash of contrasting styles. Kelvin Chong of NUS was clearly in his element, providing a voice of reason through his measured and collected manner. Sui Yi Siong adopted a more subtle approach, trying to impress upon the judges his case theory through a more open-ended cross-examination. Of particular note was the sense of humour that Yi Siong’s witness demonstrated. Responding to a question about her reaction upon finding her adopted father’s body, she replied “I was afraid. I was petrified,” stopping short of breaking out into Gloria Gaynor’s classic hit, “I Will Survive”. The judges clearly caught on to it, with the audience’s amusement underscored by Justice Coomaraswamy’s rapturous laughter. The judges were entertained, but were they convinced? As the judges returned to their chambers to deliberate on the final results, the outcome was very much up in the air. 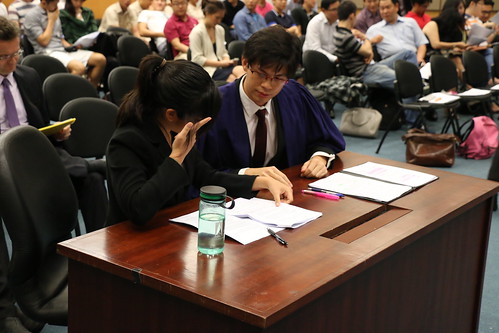 Sui Yi Siong of SMU (at right) with his witness, who provided much entertainment for the audience

It was not long before the judges made their decision. Before delivering the results, the judges took turns to comment on the quality of the competition. Commending the participants for their excellent performances, Justice Coomaraswamy highlighted the importance of the Aristotelian values of ethos, pathos and logos (i.e. character, passion and reasoning) to advocacy. While Justice Coomaraswamy looked at advocacy as a practice in the broad sense, Prof Wong, true to her Legal Skills training, took time to comment on the competitors’ skills; in her opinion, the best competitors reacted to how events unfolded during their respective submissions, rather than sticking to the outcome which they had envisioned. Lastly, Ms Hing stressed that the facts of the case were key to bringing out the best results, with the better performers knowing when to bring out the good facts, while mitigating the bad facts.

Having outlined the criteria they were looking at, the moment had arrived. A new champion would be crowned. And it would be none other than Kelvin Chong of NUS. Accordingly, Yi Siong of SMU took the 1st runner-up position, and Christian (SMU) and Yu Min (NUS) took 2nd runners-up. 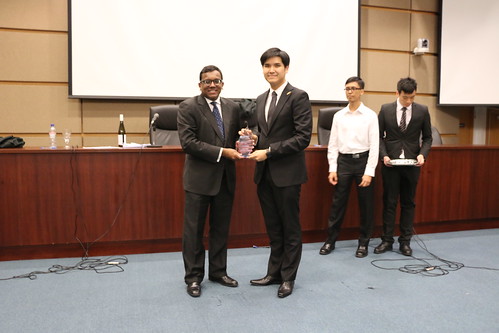 Eventual winner Kelvin Chong of NUS (at right, foreground) receiving the 1st prize from Justice Coomaraswamy. Kelvin impressed the judges with his mastery of the facts, and his calm and collected demeanour 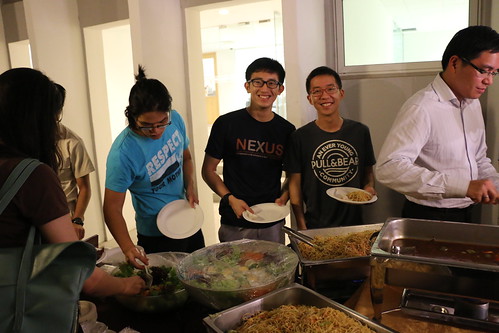 As the participants took their turns to receive their prizes, there was a sense of excitement in the air. Perhaps this was in part due to the faint aroma of the catered buffet, but there was no doubt about it – the performances that day signalled exciting times for the future of advocacy.

A fitting end to an intriguing contest, and one that will whet the appetites of many an advocate till the next round of the one, and only, Advocacy Cup.