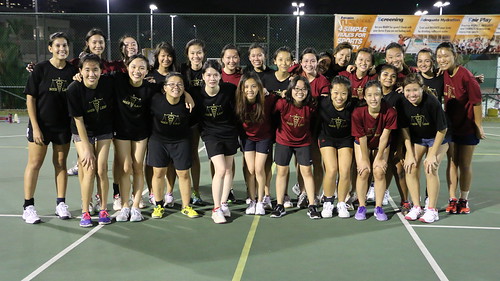 The Handball (W) match between Law and Medicine was held on the 18th Feb 2014. Both teams arrived on the courts to warm up right after classes have ended that day. The atmosphere was intense, with both teams placing top 3 in the Inter Faculty Games held the previous year. Team Law was lead by our very own star Netball/Handball player Jaime, who had 3 Medicine players marking her most of the game. 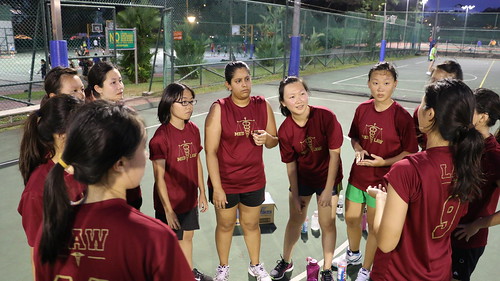 Captain Jaime giving her pre-match briefing to the team

Team Law started off on the offensive, with a few good passes, we had numerous opportunities to score, only for Team Medicine’s keeper to ward off the shots, including one from a really tight corner attempted by Natasha.

Team Medicine responded right after the attempt and managed to score a quick goal soon via a quick counterattack on the same wing.

Both teams continued to attack rather aggressively and had good attempts at goal. Our keeper Jolyn was firm in her position, consistently blocking the shots Medicine had at goal. Unfortunately, Team Medicine’s keeper also managed to keep out all of hers.

The second goal was scored soon after, as Medicine capitalised on a foul to sneak a shot through a hole in the defence. The third was soon added as Medicine once again ran a quick counterattack down the right flank to score another corner goal. 3-0 to Team Medicine.

Law continued to play aggressively, shooting quite a number of shots at the Med goal. The game went on back and forth for a full 10 minutes until Medicine played their usual strategy and scored the next 3 goals through quick passing and finding gaps in the Law defence.

Although 6-0 down, our players did not give up. They decide to use the same tactic against Medicine and attacked on the counter. This proved to be the turning point as Team Law managed to score a quick goal after a good save made by Jolyn led to a brilliant shot on the right by Pris. The game was only starting.

The halftime whistle was blown, the score was 7-2. Our players rallied up and had a quick discussion before heading back to the pitch. They were not demoralised, in fact, they seemed to have a plan in mind, especially after hearing it straight from the Handball veterans. 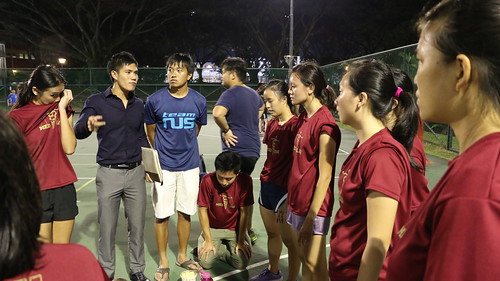 Handball veterans – Hariz, Seetow and Eugene giving tips to the team during the break

This game continued to be rather back and forth, with both team keepers making very good saves on both sides of the court. Team Law scored the 1st goal in the 2nd half when Natasha found a gap in the Medicine defence and shot the ball into the corner of the net. No chance for the keeper!

Team Law played a lot more defensive in the 2nd half, choosing to retain possession rather than rushing the shot at goal. This proved to be a great decision as another goal was scored by Jaime soon after. 7-4! 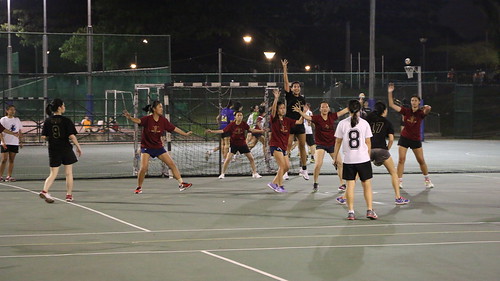 Ultimate defensive mode by the law team. Hands Up!

Team Medicine was visibly affected by this and upped their game, scoring another 2 goals in the next few minutes to once again extend their lead to 9-4. Our girls never stopped fighting though, as we scored another 2 more goals including a cannonball by Jaime in the 43rd minute.

Team Law was visibly fatigued from the rough gameplay and defended well throughout the 2nd half. Unfortunately, this was not enough to prevent another goal to be scored by Med. Charis managed to score a screamer in the final minute but it was a little too late. The final score was 10-7 to Team Med. Team Law played well, but the Medicine players were taking it more seriously (to the extent they produced 3 yellow cards in the entire match). Despite the loss, the girls showed great determination throughout the match to put up a good fight. Well played! 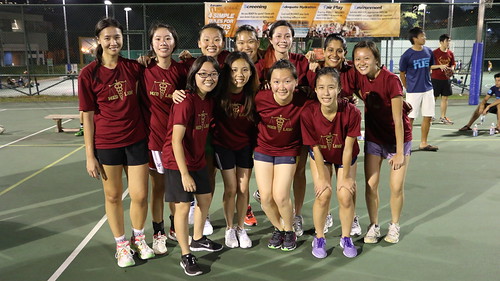