Justified will be taking a hiatus starting this April to allow members to fully prepare for their impending doom (exams). With the exams approaching, it heralds the end of Academic Year (AY) 2011/12 which is an apposite time for Law Annual (New Directions) to report on its achievements in this short one year (eight months in fact).

I would also like to take this opportunity to say some final words in the capacity of Chief Editor before I pass the helm over to the next batch. As Jolene Ng (Year 2) has already written a highlight of the top 10 most memorable events in NUS Law School for AY 2011/12 , I would instead like to pen down the tumultuous journey that Law Annual travelled to arrive at where it is today (which, I believe, is not entirely irrelevant to you given that our operations, viz. Justified and Overheard, permeate the entire law school).

Law Annual is a sub-club that used to produce annual yearbooks that showcase the events of the year (yes, indeed, Law Annual existed way long ago). 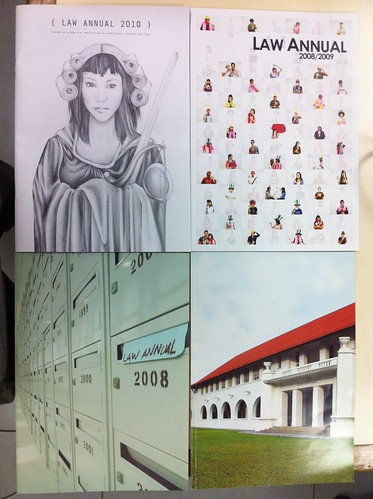 However, when the baton was passed on to me, I roped in a very abled team of exco and together we revamped the sub-club from an annual project into a proper Co-Curricular Activity (CCA) with regular activities. The vision for Law Annual (New Directions) was to create the platform that connects students of all years in NUS Law School to ultimately foster a greater sense of school spirit and camaraderie (and I believe we did achieve that). It was with this schema that we conceptualized our two bold and brand new initiatives: Justified and Overheard.

Justified was envisaged to be the go-to website for all the latest happenings in NUS Law School while Overheard was to be a platform to promote inter-years interaction. (But as time passed, we were pleasantly surprised to see these two platforms utilized in ways that far exceeded our expectations, as will be explained later.)

While we (the exco) had a BIG plan, we had NO resources. It was imperative for us to first recruit new members. With great epidermal density (i.e. thick skin) and an inflamed passion, we (I) crashed lectures and beseeched the year-twos and year-ones to join us in creating history. However, as with all novel ideas, support was predictably thin; it was like seeking a bank loan to start a business without any track record to show and without any means to guarantee success. We were, in reality, asking the student population to take a leap of faith with us to create something (miraculous) from scratch. Nonetheless, 15 people eventually heeded the call and so we started — very humbly yet very passionately.

Mid-way through Semester 1, just after the recess week, we launched Justified and Overheard with a BIG BANG: attention-arresting posters plastered all around campus, 200 customized stickers collectibles up for grabs in the lifts, and we (I) crashed lectures (again) to give a mini-lecture of how to access our two new initiatives.

Justified started out with 3 main tabs: (1) upcoming events on Just Wait, (2) weekly columns on Just-in Cases and (3) event coverage articles on Just Happened. (PS: We hope you noticed and appreciate the deliberate witty puns.) The weekly columns were intended to be an escape from the never-ending law readings. However, unlike the columns you find in everyday newspapers and magazines, our columns were injected with a huge dose of local law school flavour, such as the Summit Sweethearts and Hitting the Right Spot. Quite apart from this segment was the event-coverage articles which sought to update the student population on the latest results of a certain match or moot within 24 hours. In retrospect, it was a huge risk that we undertook when we made the bold promise of producing witty columns and current news. But I believed we achieved it. As semester 1 concluded, Justified received over 17,000 pages views and 3,600 unique visitors — all within 6 short weeks. Our viewers include NUS students (from the Law Faculty and beyond), faculty staffs, students on overseas exchange and even practitioners. Justified achieved its aim of truly becoming the first and only go-to website for the latest happenings in NUS Law School. 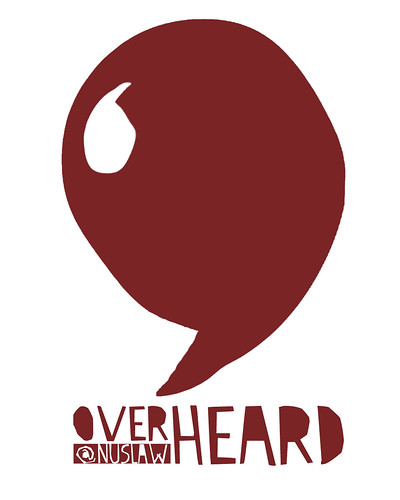 Overheard, on the other hand, was mischievously created to provide a platform for students to rant about law school life or to quote their professors and schoolmates during lectures — to ultimately encourage interaction across the various cohorts. We first begin by getting the exco to add our (year-two) batch-mates into this secret Facebook group. We then implored our friends who were Orientation Group Leaders (OGLs) to add their oglings (i.e. the freshmen) into the group. In this manner, one by one by one [repetition deliberate] our numbers grew steadily from the initial modest figure of approximately 250 members to over 400 members by the end of Semester 1. Other than increasing the numbers, we also had to tackle the quality of and the lack of posts. In response, we assigned moderators from the different cohorts and cajoled certain key law school “influencers” (yes, the popular kids) from each cohort to start posting. It started off quite shaky, but eventually Overheard managed to sustain on its own. As one schoolmate aptly remarked, Overheard became a Facebook within a Facebook, solely dedicated for NUS Law School.

In summary, Justified and Overheard was a huge gamble that eventually paid off.

Despite the considerable success achieved in Semester 1, Law Annual (New Directions) did not rest on its laurels but continued to innovate and added new surprises for Semester 2.

Other than the 3 main operations mentioned above (see Supra at [7] — okay I’m just messing with you), Justified introduced five new initiatives to spice up our otherwise mundane and routine law school life:

These five initiatives were all geared towards increasing the welfare of law students, to make even the longest day of school a little brighter and cheerful — and it seems like Justified did just that as our viewership skyrocketed. By the end of March 2012, we have received over 51,000 pages views, 11,600 unique visitors and overseas views from over 10 countries (presumably from students on exchange). Further, we have received numerous praises from students, professors and even members of the public. I could really go on ad nauseam (and shamelessly) regarding the praises we have received but I think it suffice for me to share 3 examples that truly demonstrated the presence that we have created in the community:

Similarly, Overheard received exponential increase in membership and utilization. The Facebook group is currently 669 members strong — which is almost the size of 3 cohorts and has representations from year-ones all the way to year-fours. Further, Overheard was really milked to its fullest potential as we saw 3 qualities shining through:

The success of Justified and Overhead would truly not have been possible without several key personnel that pioneered these daring initiatives. Here, I would like to express my special appreciation and heartfelt gratitude to these people.

Justified and Overheard would not have been a success without the sheer commitment and hard work, week in week out, of all our members. But the effort was truly worthwhile as all of us in Law Annual (New Directions) can rest assured that we have left an indelible mark in law school history, some might even call it a law school legacy.

Law Annual (New Directions)
Creator of Justified — the go-to website for all the latest happenings in NUS Law School, with over 56,000 pages views and 12,900 unique visitors.
Creator of Overheard — the secret Facebook group that connects the entire NUS Law School community, with over 669 members.