It’s not very often that Law students get to make a trip into town (no, U-Town does not count). It’s one of those things that seniors and friends don’t warn you about before you enter Law school, in the exuberance of receiving the acceptance letter. But in all unlikelihood, the powers that be decided that Law students needed to get a life beyond Bukit Timah Campus and U-Town which is why some of our Year 2 modules (Trial Advocacy and LCS) require some of us to make a trip into the swankier side of town (the CBD) for tutorials. 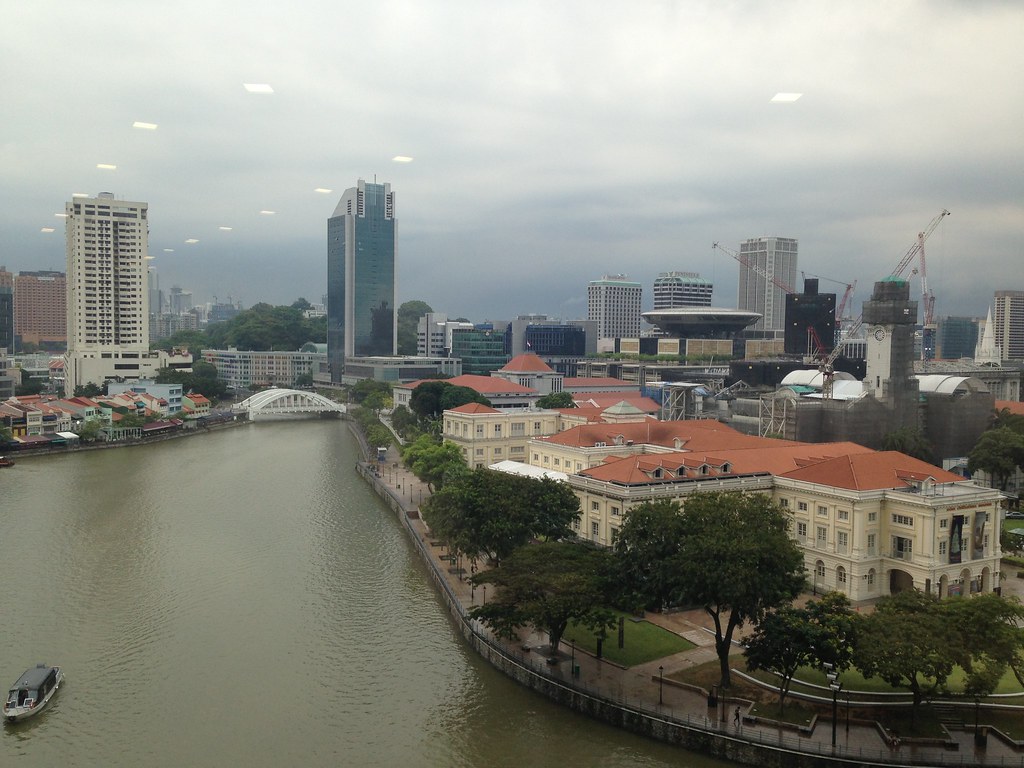 The view from RHT’s offices

I’ve been wanting to try the much raved about Tiong Bahru Bakery for quite some time but never had the chance (or time) to because Law school has this nasty habit of inundating you with insurmountable amounts of readings and assignments. But ever since Timeout Singapore declared that they had the BEST CROISSANT IN TOWN, my lawyerly instincts (and gustatory cravings) demanded that I needed to prove this assertion was beyond reasonable doubt. 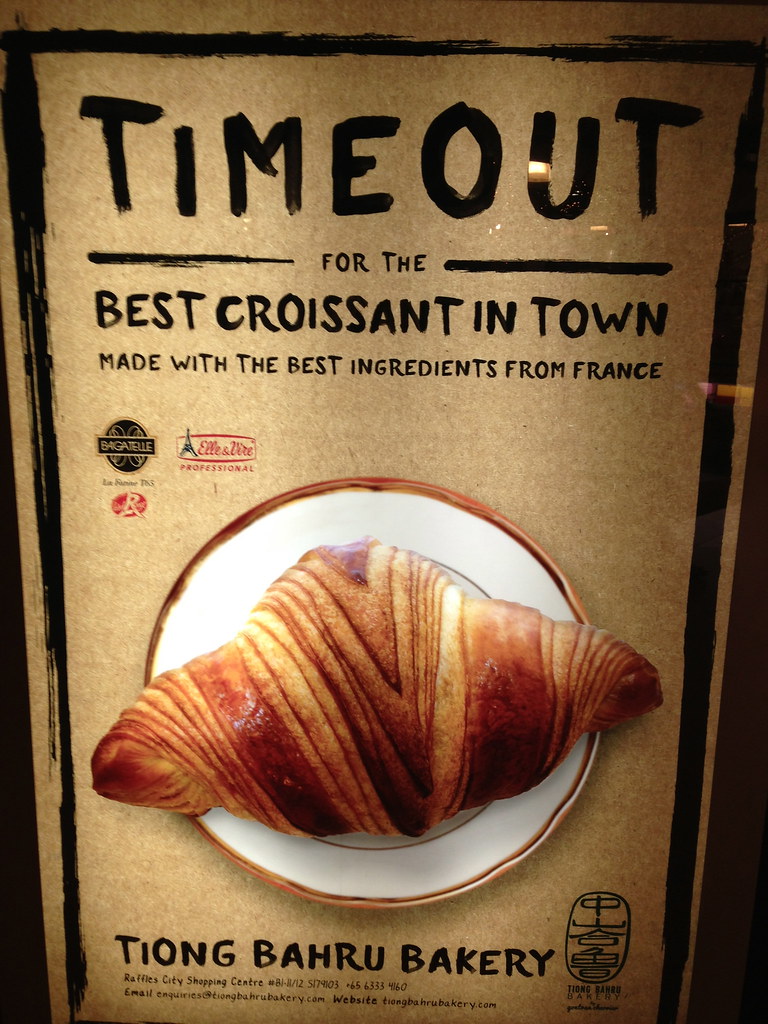 I visited the Raffles City outlet which, I’m told, has a larger seating area than the Tiong Bahru outlet. But, as I’m also told, the food quality at the Tiong Bahru outlet is much better. The cafe is located at the basement of Raffles City where the previous occupant, Aerin’s Restaurant, used to be. A water fountain lies smack in the middle of the place although the first thing you will encounter is the wide and expansive display of artisan pastries and the young and pretty counter staff (not a single male was spotted behind the counter).

The decor was ostensibly nondescript but belied an artful tastefulness in its unique and kitschy selection of furniture reminiscent of the 80s. White leather upholstery clamoured for attention amongst the harsh gunmetal textures of aluminium tables and chairs; natural sun rays flowed through the high glass ceiling while competing against the fluorescence of indoor lighting, diffused by the water feature in the middle of it all. The remarkable blend of contrasts reflects Tiong Bahru Bakery’s East-West fusion and heritage that suffused the cafe.

But clearly, the main attraction is the food that stands unparalleled to any water fountain (or two) in the middle of a shopping mall. The vast array of choices made it difficult to choose but we ultimately settled on the quiche, squid ink specialty bun, butternut pumpkin soup, and the sinful yet divine kouign-amann. 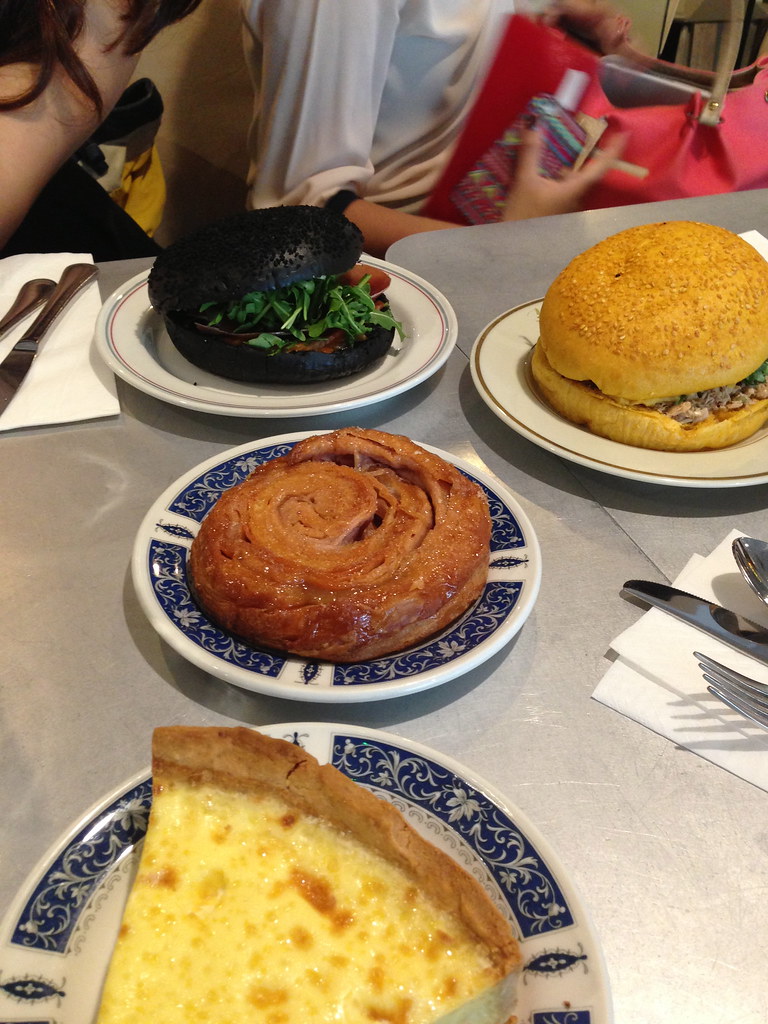 Pronounced “Kween-Ah-Mon”, this pastry is absolutely incredible. According to Wikipedia, it’s a Breton cake made with bread dough containing layers of butter and sugar folded in. It sounds terribly sinful but take one bite of it and any guilt you might feel at eating this is immediately forgotten. When all rationality returns to you, the only rational response you can make is to take another bite. The pastry is crusty yet chewy, buttery yet sweet. Smooth undertones of caramel uplift the medley of buttery sweetness into the realm of heavenly goodness. It is $3.20 for the plain one and $3.90 for the strawberry version. 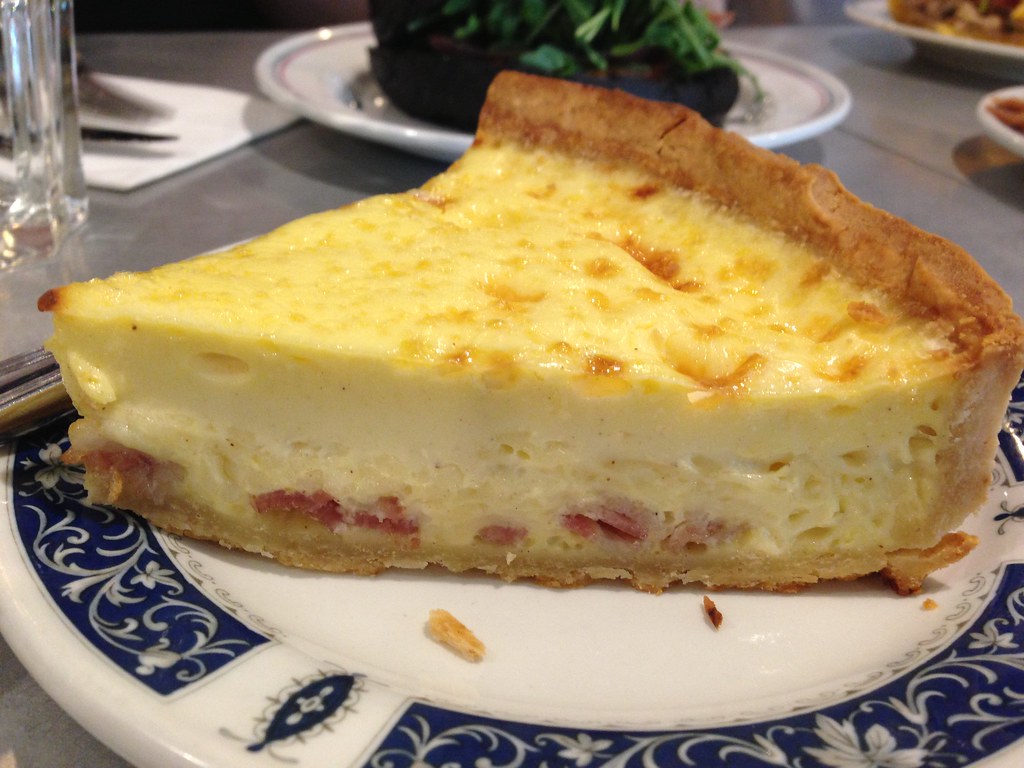 Looking rather plain and nondescript, I wasn’t expecting much from it. All the better because that first bite left an indelible impression on my tastebuds. The egg filling was smooth and simply melts in yours mouth. This stands apart from some of the more “chunky” offerings you might find elsewhere. The savouriness of bacon (note: not Halal) was apparent throughout each bite and was accentuated by the smoothness of the cream and egg filling. The crust was rich and buttery although the texture was more like a biscuit and not as fluffy as I hoped it would be. But for $6.50, it’s hard to complain about something so simple being done so well.

TB Bakery offers several “Specialty Buns” that are more refined versions of the humble sandwich. The squid ink specialty bun consists of parma ham, smoked salmon, pesto and a healthy serving of rocket leaves, sandwiched in an ebony bun. Although the bun itself contains squid ink, the taste of squid ink was not very noticeable and the bun generally had an earthy tone to it. The saltiness of the parma ham and smoked salmon, kissed with a tinge of pesto, balanced out the generous amount of rocket leaves. This is probably one of the more unique sandwiches you will ever find in Singapore. $8.50. 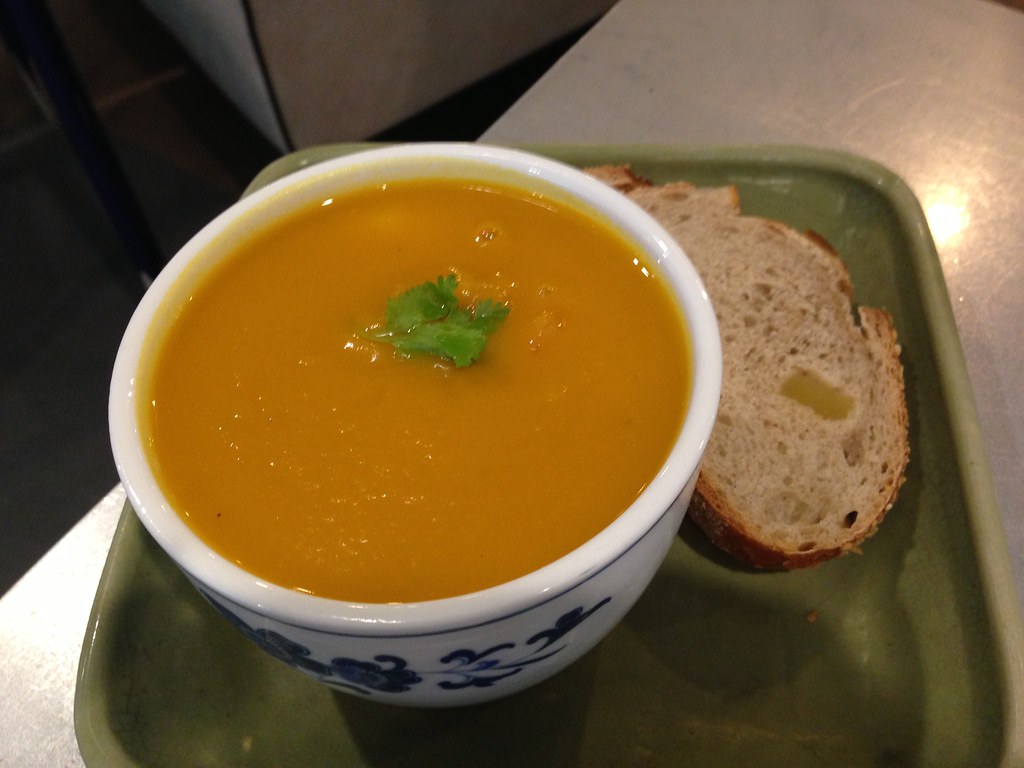 The pumpkin soup was interesting to say the least. It was not predominantly sweet or savoury so my tastebuds were left rather confused. Real pumpkins were used, as evident by its thickness and consistency, and it was lightly scented with cumin. The real star of the soup was, ironically, the 2 large prawns that came with it. 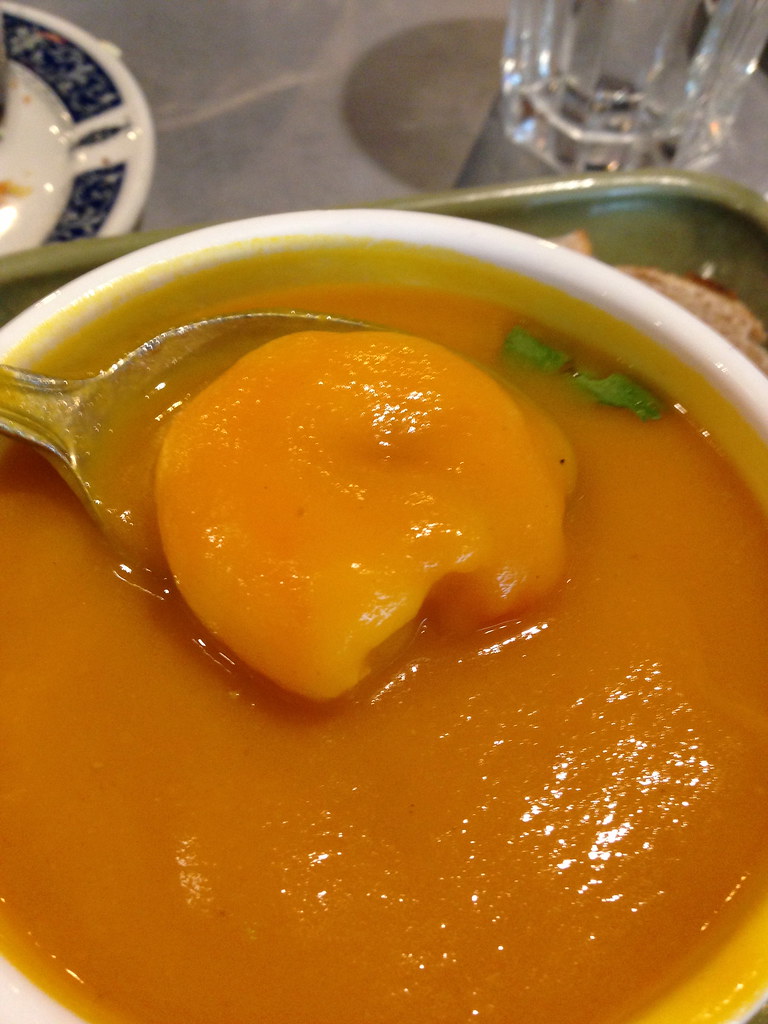 The prawns were surprisingly fresh, succulent and bursting with flavour. Hardly the type you will find in the Summit. It provided a very nice contrast to the overall flavour of the soup but my tastebuds still couldn’t quite decide whether it was sweet or savoury. Not that it matters if you don’t care much for certainty and conceptualizing soup into procrustean beds (nothing to do with crustaceans that were found in this soup); it’s just one of those unique and subjective flavours that some people will either like or hate. $8.00.

Singapore’s allegedly best croissant. It was light, fluffy, flaky, and of course, buttery. The butter (sourced from France) added a slightly nutty nuance to it. The texture was slightly chewy and reminded me a little of roti prata.  Unfortunately, it was cold by the time I got home to try it since I had this for take-away; needless to say, croissants are best eaten fresh from the oven. But still, even the BEST croissant in Singapore would still be amazing cold right? Unfortunately, the experience was sort of underwhelming after all the hype and expectations. Yes it was good, it was flaky and buttery, everything you would expect of a good croissant but perhaps I expected too much. It just didn’t match up to the absolutely divine kouign-amann. I’m no connoisseur of French pastry, much less croissants, so all I can say is that it is better than the one at Delifrance just a few stores down.$2.90. 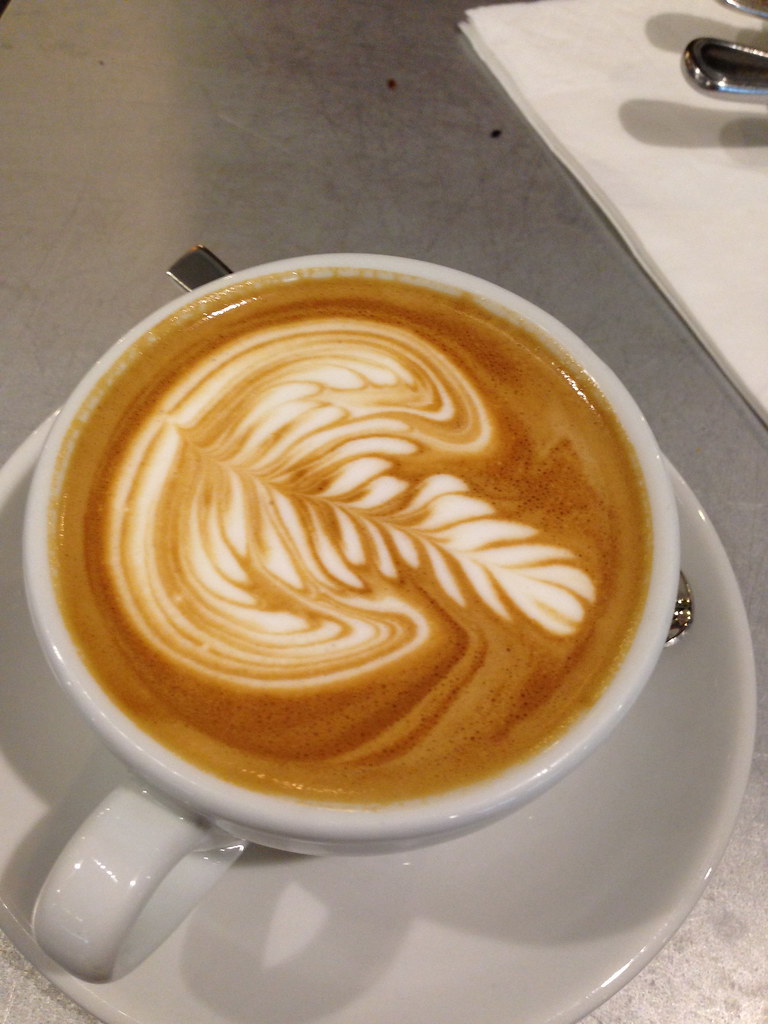 There were so many more pastries we didn’t get to try like the pandan flan, brownie, lemon tart, croque monsieur and other sandwiches but it’s guaranteed that I’ll go there again to try everything else I didn’t get to. Yes it is rather pricey but the free flow of water and some table service do make up for it (there’s no 10% service charge). Making a trip to Tiong Bahru Bakery is worth the while, especially after you end a long day with an LCS tutorial in town. If you do make a visit, don’t leave without trying the kouign-amman and if you’re lucky, they might even have free samples for you to try.