What’s fast, furious and not for the faint-hearted? That’s right folks, IFG badminton was upon us once again last Saturday, 7th September. Even before breaking a sweat, our Law shuttlers had already made history by reaching the semi-finals for the first time in our faculty’s history. And as Lady Luck would have it, Medicine would be our opponents in the semis. It would be the stage for an epic showdown.

The Law team did not get off to the most ideal of starts. Despite fighting hard, the team lost their first two matches in the women’s singles (Jia Min) and men’s doubles (Chun Han and Wei Rong). 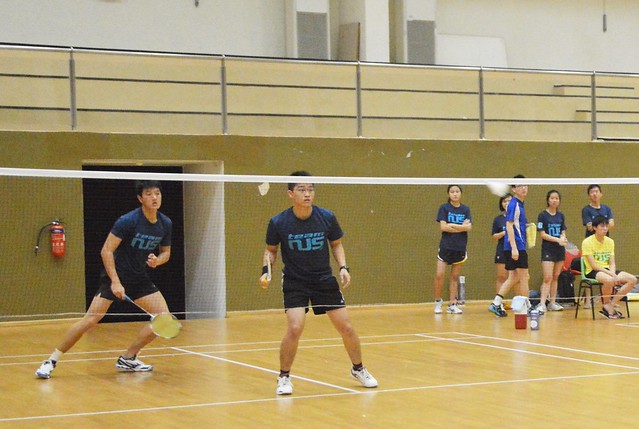 2-0 down, the Law team faced an uphill task if they wanted to ensure their passage into the finals of IFG badminton. Step up Lim Boon Tiong, Law’s representative for the men’s singles.

You wouldn’t have guessed Boon Tiong was shouldering the heavy responsibility of keeping Law’s hopes alive, as he took his place against Medicine’s Rui Jin. Perhaps it was a sense of confidence grounded in his years spent around the badminton circuit, or a manifestation of his inherent personality, but Boon Tiong was a picture of calm as he began his first set. Too calm, maybe, as a series of uncharacteristic errors allowed Rui Jin to claim the first set 21-19. Sensing the significance of the next set, Boon Tiong came back stronger in the second set and edged it 21-19. It was make-or-break in the third set for Boon Tiong and the Law team. 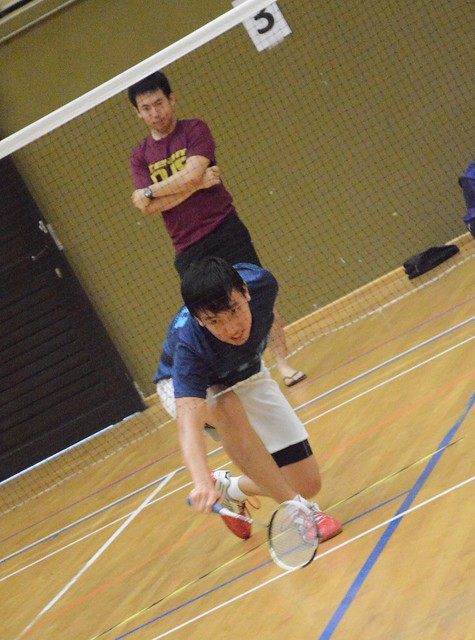 As the third set got under way, the different styles employed by the two players started to distinguish themselves. While Rui Jin from Medicine proved a tricky customer with his deceptive drop shots, Boon Tiong was comfortable with a variety of strokes, both defensive and offensive. Yet, both players showed impeccable net play as well as retrieval work, underscoring the close competition of the third set. It was only when the final three points were played that Boon Tiong managed to inch ahead and claim the set 21-18, much to the delight of the Law team and their supporters. While Boon Tiong had kept the Law team in the running, there was still the matter of the women’s doubles as well as mixed doubles.

In the next match, Min Hui and Hooi Li faced off against Medicine’s Melissa Leong and Tan Zelei. If the previous match demonstrated the benefit of experience, this match showed that fighting spirit can be just as influential, if not more. Down by a scoreline of 7-12, things were looking ominous for the women’s pair from Law. While many others might have easily thrown in the towel, Min Hui and Hooi Li were not done just yet. Rallying from their 5 point deficit, they stormed ahead after the interval, clawing back 10 successive points to a scoreline of 17-12. While the Medicine pair tried to fight this unforeseen tide of badminton prowess, Min Hui and Hooi Li eventually claimed the first set 21-15. It was a dominant display of the highest quality, and they put paid to the myth that it was a fluke by doing just the same in the second set. Racing to an 8-0 lead before Medicine registered their first point, the women’s team won the second set 21-15, levelling the overall team score at 2-2.

Unfortunately, things were not to be, as Law’s Jayden and Kai Xin were unable to emulate the team’s results in the previous two matches in their mixed doubles match, losing narrowly by a 21-19, 21-16 scoreline. 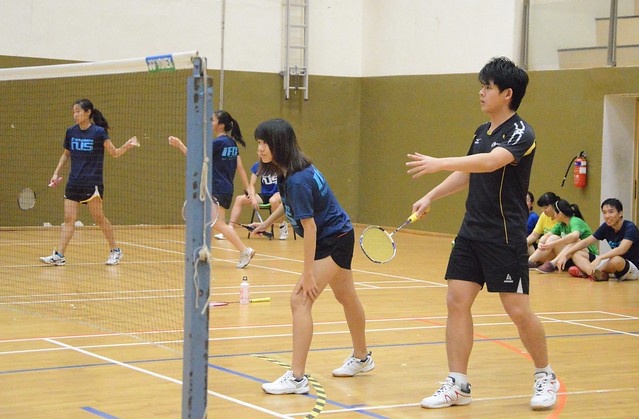 Kai Xin and Jayden ready for the return

Despite the eventual loss, Team Law would have to lick their wounds and prepare for their 3rd/4th placing match against Science.

In the first match of the Law-Science face-off, Boon Tiong continued his form from the semis, beating Kai Ren from Science 21-12, 21-13 in the men’s singles. This was followed by a loss for Team Law in the women’s singles, with Jia Min putting up a good display despite the eventual loss.

With the scoreline at 1-1, the third matchup involved the men’s doubles team. In a shake-up of the roster, Law’s representatives were Chun Han and Jayden, facing off against Science’s Guo Hao and Cheng Long. Would Law’s strategy backfire, or would it deliver success?

As the match progressed, it became clear that team manager Victor’s decision was a masterstroke. It was a closely run affair, as the teams went into the interval of the first set at 11-9. The key moment came when the score was at 13-10, as Jayden claimed the point with a powerful smash which let the Science pairing with no chance whatsoever. From then on, it was smooth sailing for the pair from Law, closing out the set at 21-15. It was more of the same in the second set, and with a scoreline of 21-14 to Law, the men’s doubles team claimed the victory.

The women’s doubles was up next, and what a match it was. Once again, Hooi Li and Min Hui formed the pairing, and they squared off against Science’s Kit Yee and Chen Xi. Right from the outset, the pair from Science showed their mettle, and it was 11-8 to Science in the first set interval. However, Law came back with a vengeance after the interval, and after rallying to level at 12-12, eventually won the set 25-23. However, Science tore up the script and rallied back from their setback, as they won the next two sets 21-14 and 21-11 to claim the women’s double match. 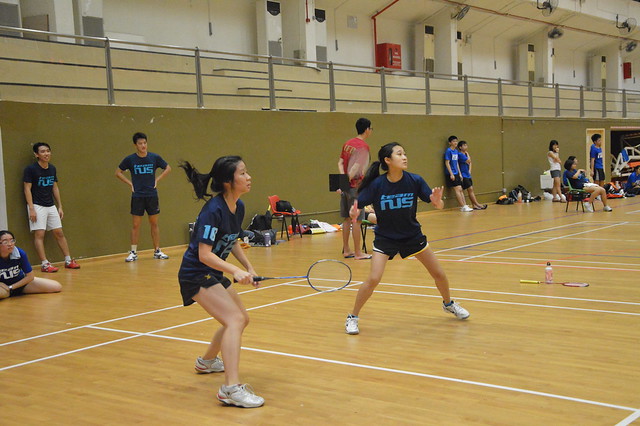 Min Hui (left) and Hooi Li in their element

With the scores level at 2-2, the tie breaker would be the mixed doubles yet again. Although our mixed double’s pairing of Kai Xin and Wei Rong gave their all, they ultimately succumbed to defeat to the Science pairing.

Despite the loss, team manager Victor was encouraged by the team’s display in clinching the 3rd runners-up position.

“Law did a very good job, and it was a historic moment to have made the semi-finals,” Victor said. “This is a good first step towards Med-Law.”

Salient observations indeed, and congratulations to the Law team for a superb showing that all of us can be proud of, this reporter included. Onward to the Med-Law games, and on the face of this display, we have every reason to be optimistic. 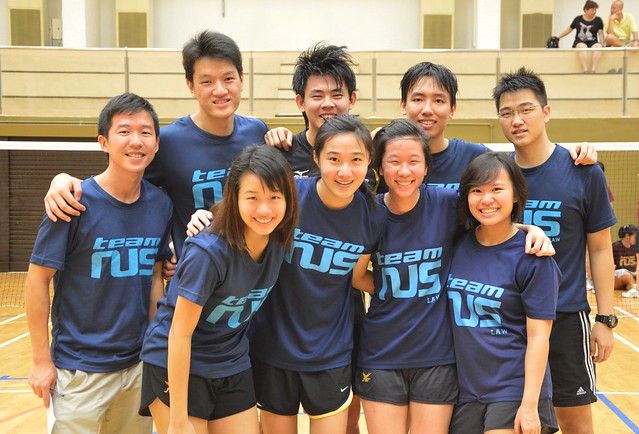