We said that we would settle it in court — and we did. 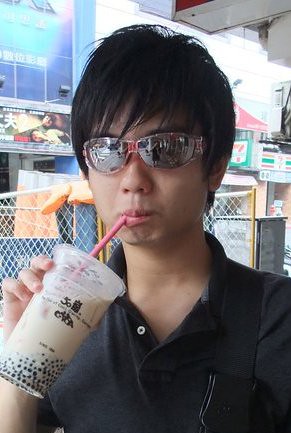 Unfortunately, due to a completely unforeseeable event verging on an Act of God, Kim Wee was injured a week prior to our first match in a motorcycle accident. Emerging from what would have been a fatal crash to any other mortal, Kim Wee begrudgingly confessed that he would have to sit the first two matches out due to his ‘flesh wound’. This started to feel faintly reminiscent of a George R. R. Martin plot — our main player was taken out before the action even began.

Against this backdrop, Law nevertheless pressed on in the preliminary rounds against Medicine, SDE and Computing. Despite our best male player taken out of action, we emerged second in our group by the efforts of all our players, only losing to Medicine by a narrow margin of 2-3. With this, we were through to the semi-finals to face Business — and Kim Wee had recovered sufficiently to join us in arms again.

However, this was when the second Game-of-Thrones-esque installment unfolded — Kenny would be unable to make it for the semi-finals and finals (or 3rd and 4th placing).

Deprived of the inspiration of our revered brother-leader *by his presence we are humbled*, Business proved to be a formidable opponent. With the loss of our first match, we found out that Kim Wee’s opponent was a former national junior team player of India. Yet, whilst the rest of the team was worrying about the outcome of his match, Kim Wee simply gave one of his reassuring half smiles and strode into the court.

According to Zeslene (whose legal capability is purportedly only exceeded by her squash skill), Kim Wee made the Business player continuously change directions until the intensity claimed his ankle. With the sprain and the expiration of the time-out, Kim Wee easily proceeded to claim the match for Law (though Business must be commended for their valiant refusal to concede the match). Inspired by that victory, our remaining 3 players went on to claim the remaining matches. Law — 4, Business — 1. 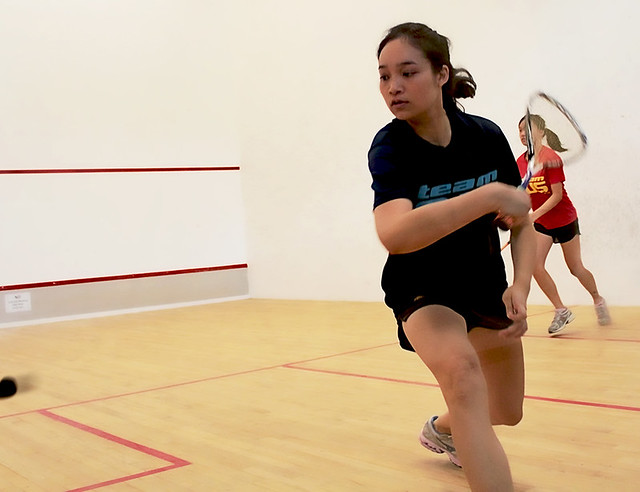 Jade going in for the kill

We were through to the finals to face Medicine. Again. This time though, we were determined to prevent history from repeating itself. 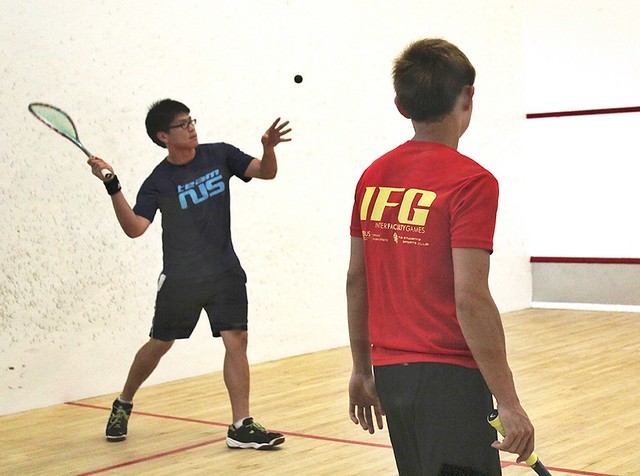 Unfortunately there are no photos of Isaac as our female photographer was so entranced by him, but relative to this guy Isaac looks at least 10 times better

First, the match between the southpaw friends — Isaac (Law) against Jerome (Medicine). From this writer’s perspective, Isaac is quite the player — something many girls seem to agree with. Darting around the court like a kid in a candy shop, Isaac indeed lived up to that reputation. Despite Jerome’s natural athletic ability (he played squash, handball and soccer for this year’s IFG; inter alia), he soon found himself constantly maneuvered around the court by Isaac’s well-placed shots. 2 sets later, Isaac secured the first match for Law. (After the match, Isaac confessed that the match seemed close at the beginning only because he kept playing to Jerome’s stronger forehand — he had forgotten that Jerome was a left-handed player) 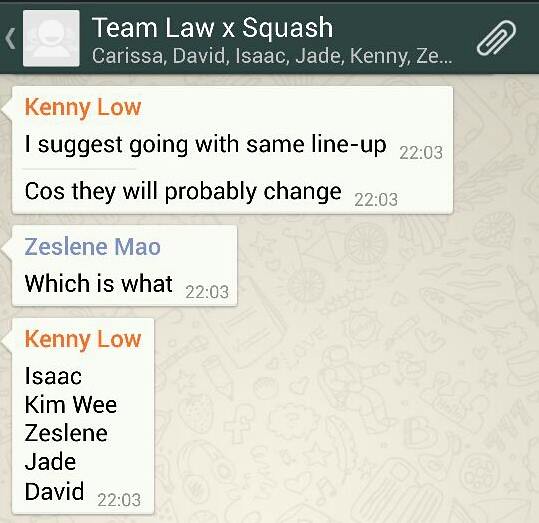 Next up was Kim Wee (Law) against Nicholas (Medicine). Thanks to a masterstroke line-up crafted by Kenny from across the Straits of Johor, the best players from both teams were to play each other.

However, our faith in Kim Wee was momentarily tested as Nicholas managed to get an early lead. But with Kim Wee’s dogged determination, nearly every subsequent point brought the spectators to the edge of their seats. It was simply a matter of which player hit the first winner or made the fatal unforced error in each excruciatingly long rally. Even the members of the women’s canoe polo team (who had conveniently come in time for Kim Wee’s match) watched enraptured by the high level of squash being played. One of them (the female canoe polo star Iris Pek) even broke the intense silence by shrieking “YES” in exhilaration when Kim Wee won a hard-fought rally. Not to be outdone, the Medicine supporters began cheering “come on Nick!”. But Kim Wee evidently thought the Law supporters were cheering “come on — NICK!” — and he appeared to begin aiming for the nick (a nick is the point where the floor meets a wall, making it impossible to hit as the ball simply rolls out instead of bouncing). This resulted in Kim Wee expanding the point difference between the two players. A few well-fought rallies later, Kim Wee emerged as the winner of the 2nd match. 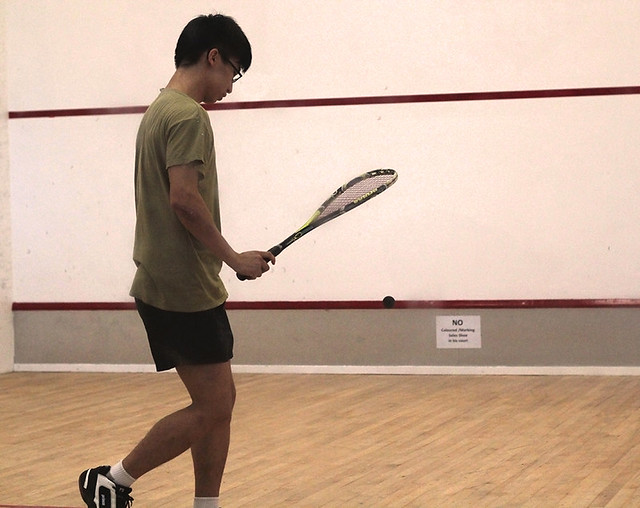 There were 3 more matches ahead, and Law simply had to win one more match to claim this year’s Squash IFG title. However, it turned out that the victory was to come sooner rather than later thanks to Law’s Zeslene Mao. Having just spent 3 hours studying in Starbucks, Zeslene Mao’s mind was all warmed up. Facing Medicine’s Vanessa, Zeslene Mao swiftly showed her ability to objectively analyze under pressure — a skill honed through 3 years in law school. Noticing her opponent’s struggle when returning crosscourt shots, Zeslene Mao persistently forced Vanessa to move from side to side, eking out numerous errors from Medicine. A short two sets later, she secured the 3rd match for law.

Thanks to Mao’s efforts, Law had taken a great leap forward. We had become the champions for IFG Squash for the first time in recent history. Although we lost the subsequent two ‘battles’ (making the finals “closely-fought”), we had won the war. 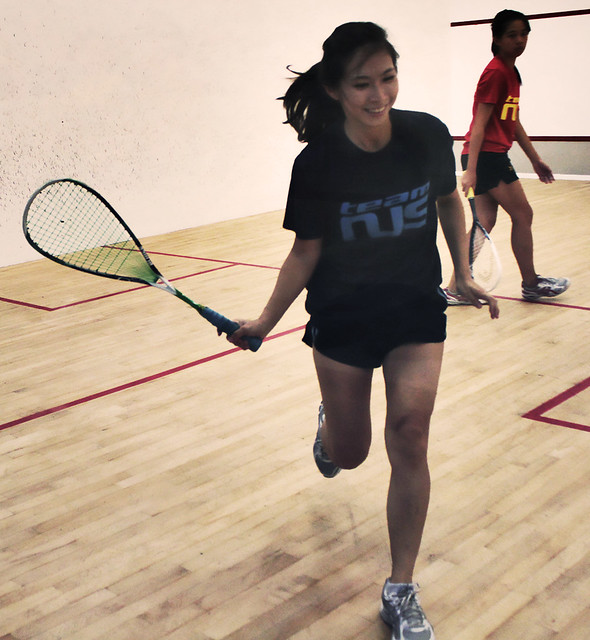 The team would like to thank all the supporters who came down in person — the encouragement from busy law students was extremely heartening. Special thanks goes to Professor Tan Cheng Han who offered to play for the team and gamely came down to train with us — and for showing us that it is possible to be fit even after leaving law school. 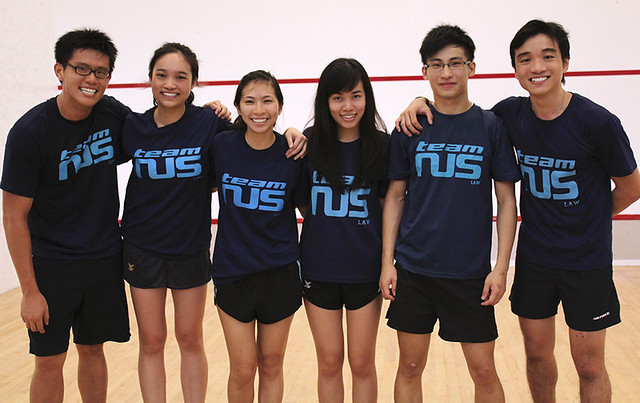