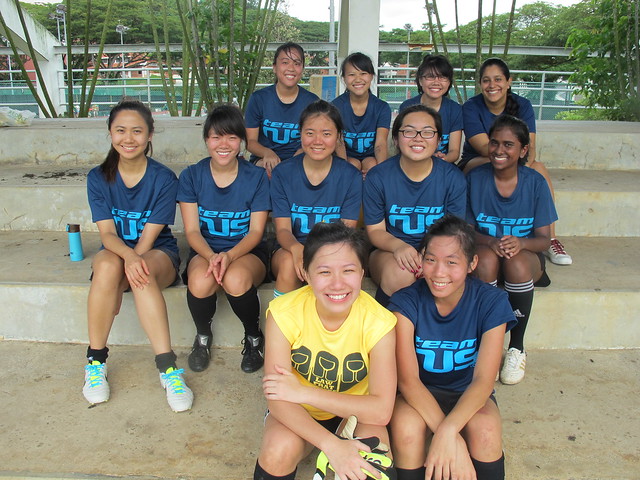 Welcome to Fashion Week Watch: your one-stop Singapore Fashion Week official reports blog. This week we look at some jaw droppingly stylish looks for Law’s new collection ‘Field Girls’. So grab a latte (skim milk please!), sit back and peruse the styles that are all the rage this summer.

Scoring this year from Law industry leaders was as radical as dress sizes. Just as smaller dress sizes indicate a more flattering figure, so too did lower runway scores demonstrate a more impressive runway showing. ‘We really wanted to emphasize that size zero was the way to go’, commented Law Fashion Week coordinator Regina George, ‘so that’s our focus for today, really.”

In the spirit of feminism, 2 teams were placed on the runway at any one time, so a decent comparison could be made.

The festivities reportedly began with a showcase of designer talent from Law and USP. According to reports (unverified at publishing time), dozens of fans clamored to watch the models strut their stuff down the grassy catwalk at the Sports and Recreation Centre (colloquially known as ‘SRC’). Members of the Law Royal Family were also spotted among the models, prompting a flurry of paparazzi action. 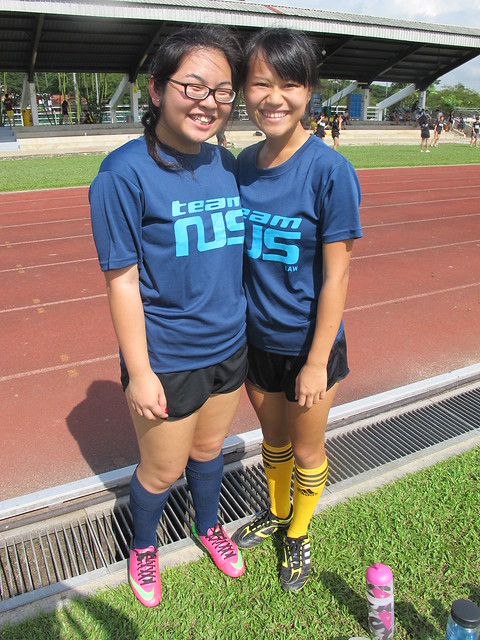 Law had a decent showing against USP, with critics agreeing that both designer labels had some hits and misses. As Law stood up to the challenge, their possession of the ball (and indeed the hearts and minds of their spectators) soon triumphed, with Head Model Jolena the Invincible finding the back of the net with some stylish footwork. For undisclosed reasons, this was considered a ‘goal’ and judges awarded 1 point to Law. USP lost favor soon after, by scoring against Law, in one of many humiliating attempts to one-up their delightful opposition. Soon after, the show concluded and was declared a draw by the runway ringmaster (update: apparently he wishes to be known as the ‘referee’). Not a bad start at all.

Here are some of the highlights of the opening show: 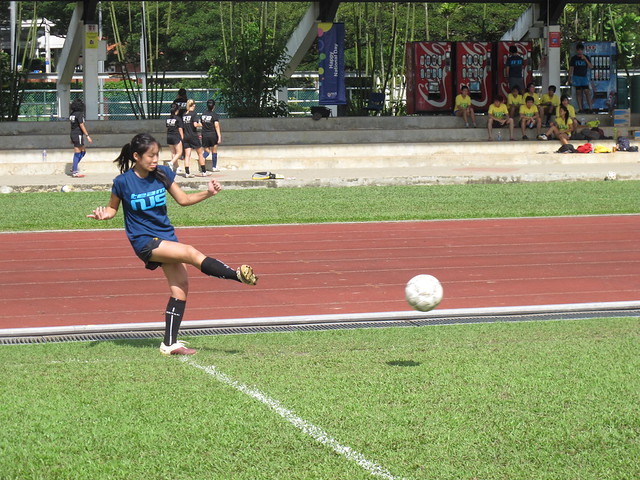 Novel and stylish ways of presentation (just look at that balance!) 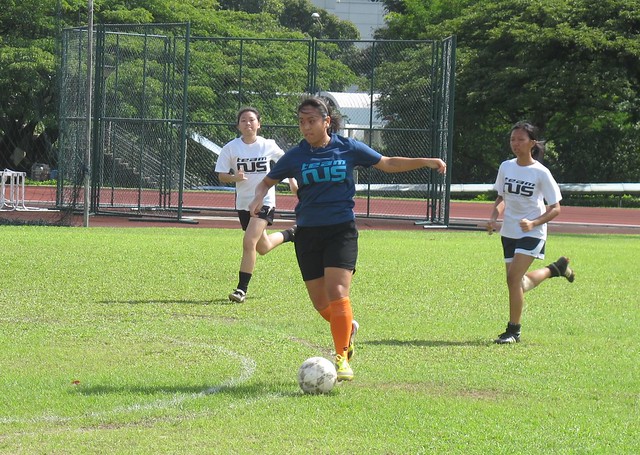 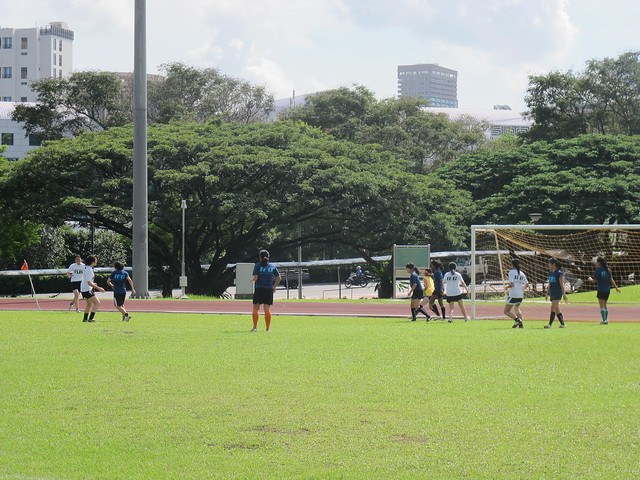 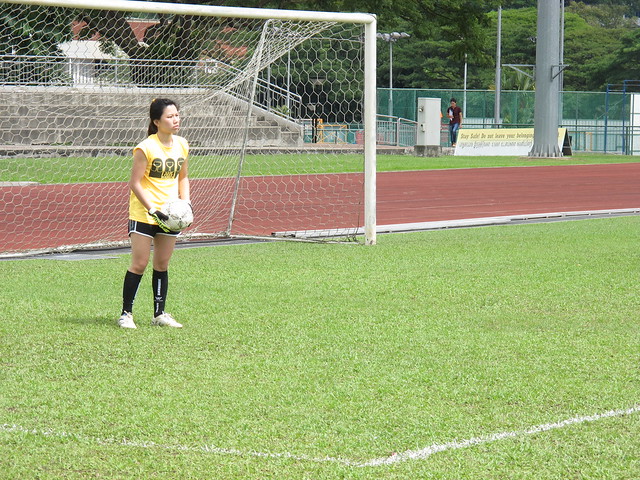 Boy is that girl a keeper! Very Sasha Fierce 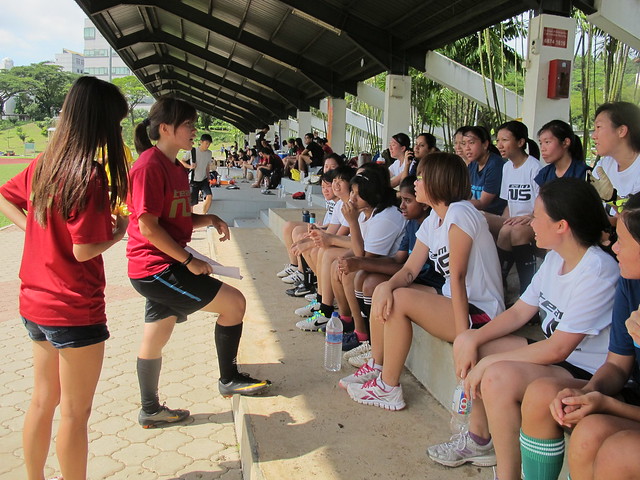 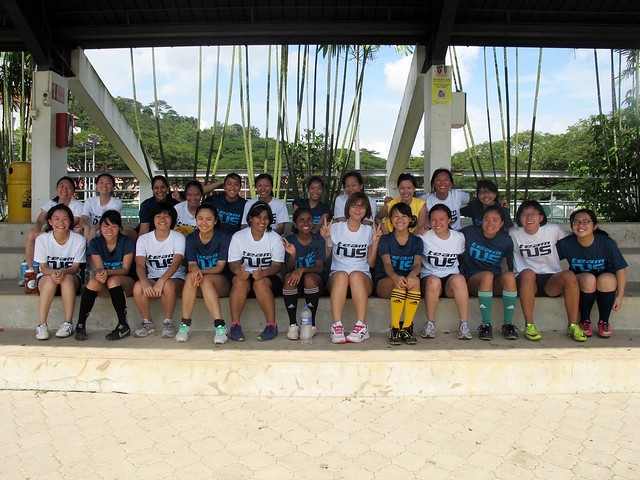 After their initial showing, the Law models gathered for close-ups shots of their designer wear, universally acclaimed by both spectators and industry leaders alike, while designers spared some time to discuss the upcoming trends with our reporters.

“This week is a pretty much a preview of the trend that is sure to sweep through campus within the next month, and will possibly be seen in all trendy streets in the likes of Harbourfront, Jurong West and Tiong Bahru North. It’s the hottest of all Law looks to date – we’ll be seeing a fashion renaissance featuring casual yet funky tees with a classic element of faculty pride, comfortable mid-thigh sports shorts, a variety of edgy footwear and the ‘piÃ¨ce de la resistance’: magnificent rainbow coloured knee high socks,” said the faculty’s esteemed clothing designer Gretchen Wieners.

“The big themes dominating this season’s collections are ‘roomy,’ ‘colorful,’ and ‘comfortable,’” said Wieners, adding that there is already considerable buzz surrounding ‘Blush’, the new nail polish modeled by Her Excellency Tricia. “Many other designers have gone with bright neon greens and purples for their nails, which should be a big hit among the Engineering crowd, but I think that those with discerning style will tend to gravitate towards my designs.” 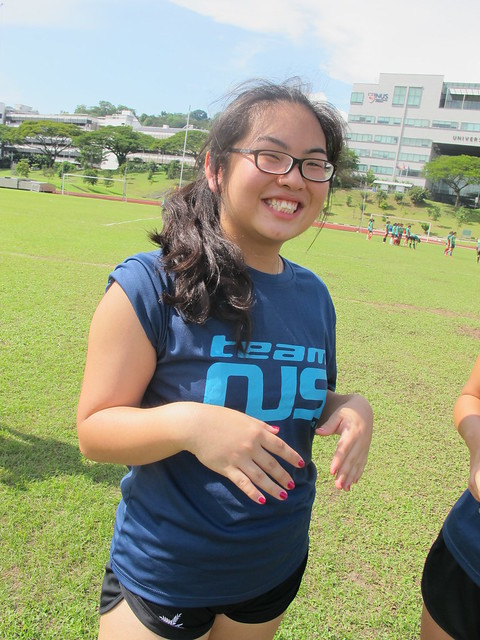 That’s so fetch! Pink is in, featuring ‘Blush’, the new polish. 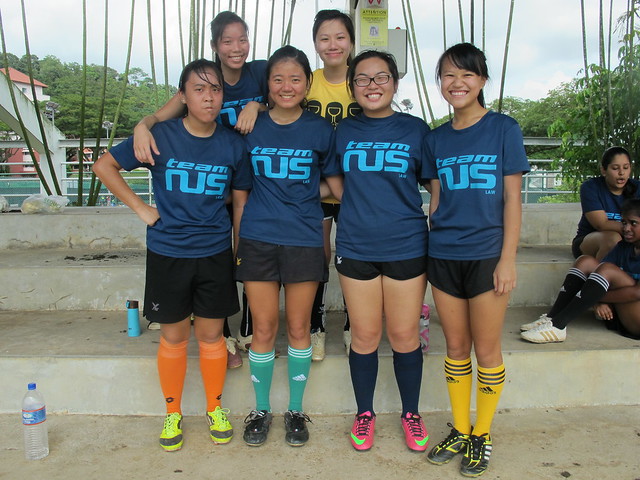 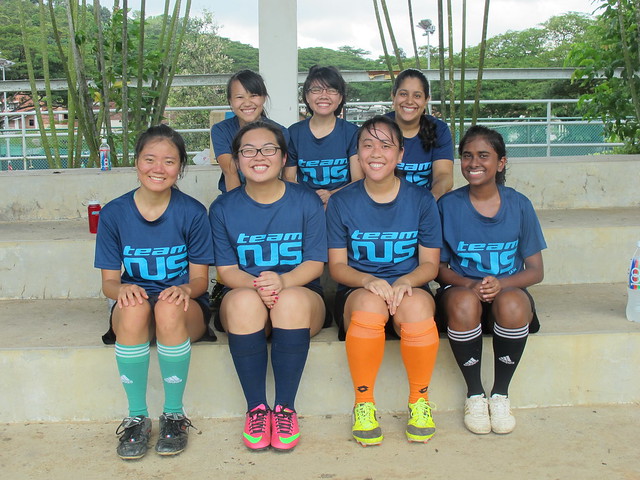 Casual pose embodying the spirit of the new collection

Not long after the first photoshoot, the models took the stage field by storm for their second showing. This time, they met archrivals Medicine. Despite the tough opposition, Law retained their sense of calm and grace and gave an excellent showing, while Medicine fumbled and scored a goal in the first half. Law’s score sheet, however, remained pristinely empty throughout the match, to the great delight of fans.

Attempts at violence by the Medicine line-up appeared not to faze Law, obviously yet another indication of legal poise.  Clearly, at the end of the match, Law had triumphed Medicine in both style and substance, and emerged the clear fashion winner. Kudos!

Below are highlights of the match, along with some critics’ opinions on Medicine’s collection: 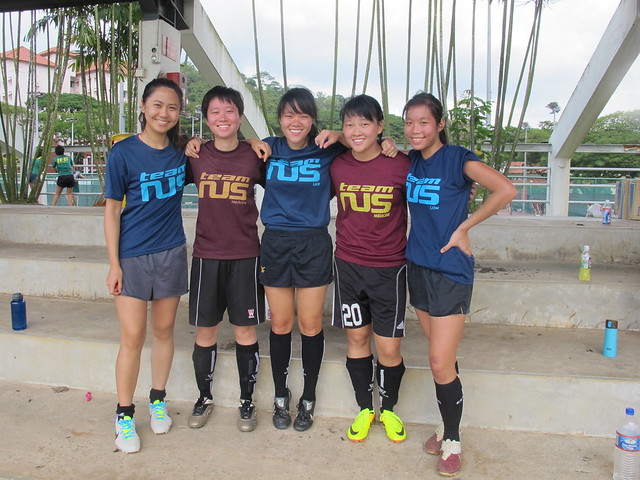 ‘It’s really all black, black and black, with a splash of dull red thrown in from their tees. I don’t understand: Are they trying to emulate Black Widow Chic? I mean, honestly, the Goths were so 90s. Move on.’ 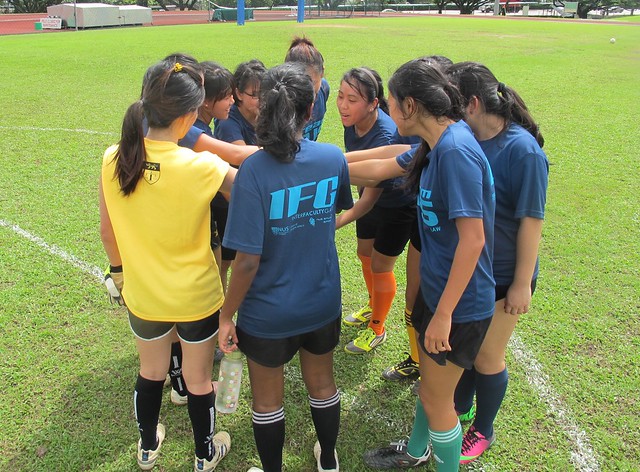 Model huddle before the Medicine showing: Too much good stuff in a single photo 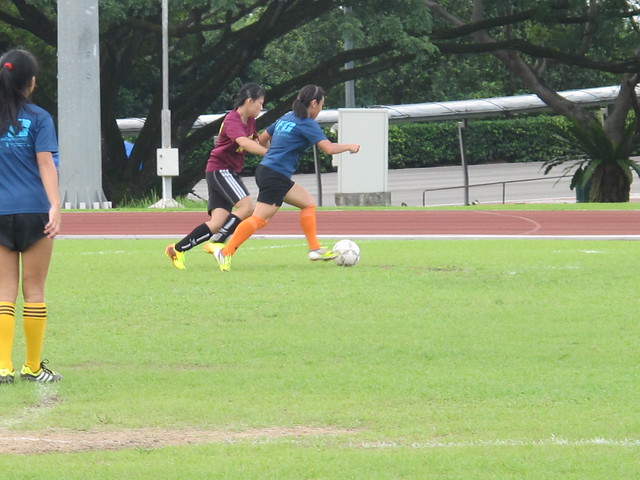 V.I.A. (Violence in action): Actually, this could be a good medicine slogan. Jus’ Sayin’

‘Neon green boots? What is this? A dangerous animal parade? I’m all for edgy fashion, but this goes over the edge. Like wearing sweatpants on Monday. So not fetch.’

Let’s all take a moment to appreciate this wonderful human spirit that is the epitome of cupcakes and rainbows: 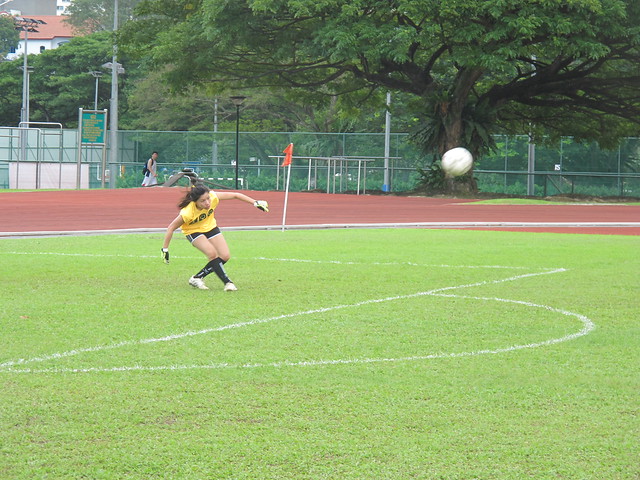 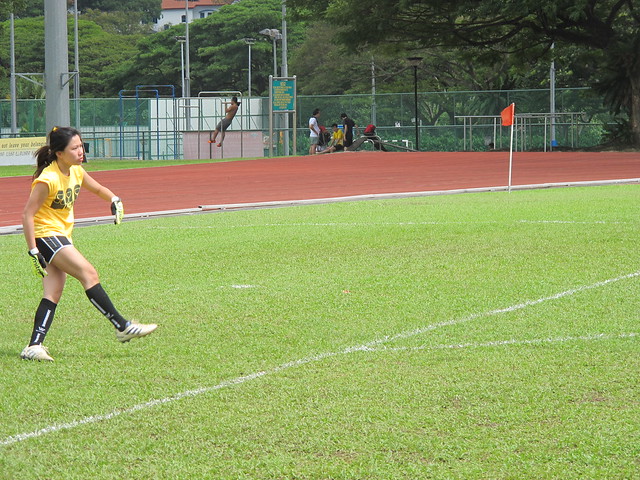 Who has time for shirtless guys doing pull ups in the background when she’s in the frame? Nobody.

For those of you sorely unaware, her name is Ho Wan Yi, a Year 4 Law student, also part time model and (possible) unicorn. 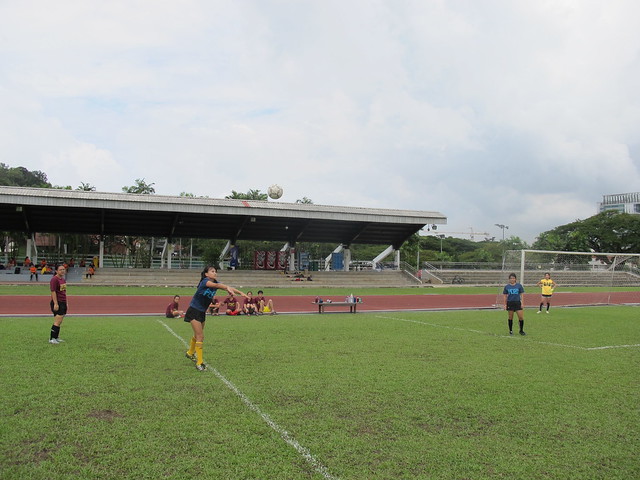 Medicine looks on in wonder as Charmaine demonstrates how she rolls

Of particular interest during the event were the actions of an unknown male, dubbed the ‘Industry Spy’, who manifested himself near the pitch and demonstrated an exceedingly enthusiastic interest in the Law-Medicine match. When confronted, he slunk off back to the stands. His name remains unknown. 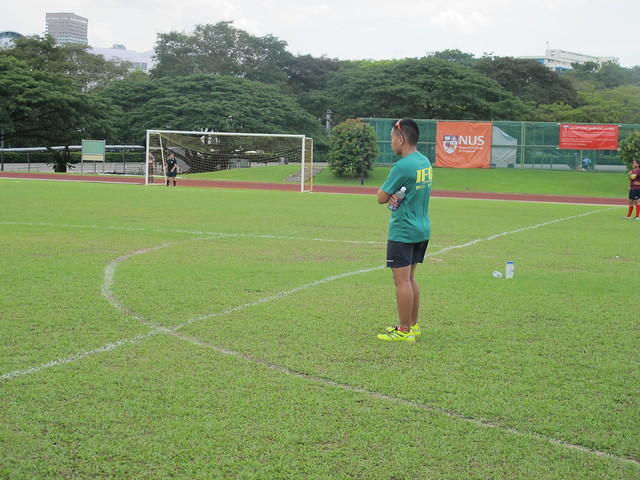 Close-up of the Industry Spy

As the Sun rose across the horizon, the sweltering heat forced many into the shade. However, Law’s determination was put to the test as they faced the School of Design & Environment (‘SDE’).

Sporting well-toned physiques, the SDE models were widely appreciated as being the hottest bunch on the field (apart from Law, of course). Naturally, as the two diva-licious teams clashed, this match caught the eye of major fashion aficionados around campus.

Nevertheless, SDE found the net twice before the final whistle. At this point, neither group cared enough to take part in any nonsensical formalities, and Law merely nodded in acknowledgement before collapsing on the bleachers like beached whales in search of mercy and water. 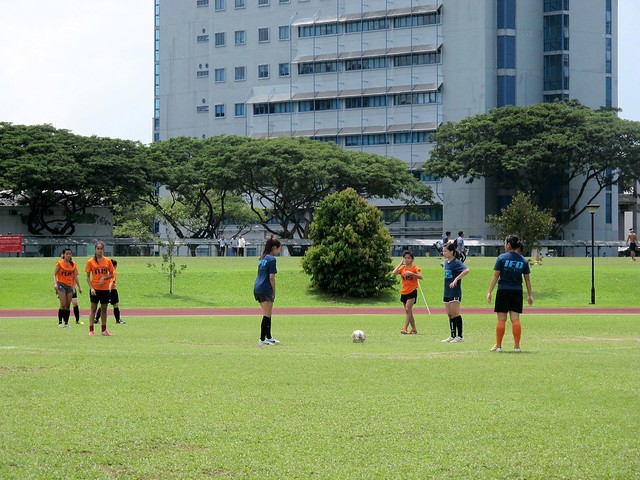 ‘This ball has seen better days’ 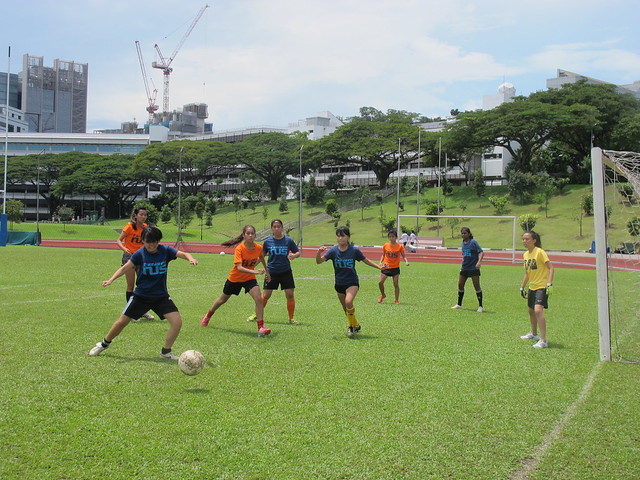 The last and final match against Arts saw Law sail through straight to the end without scoring a single goal, which failed to affect any in the team, their main concerns at that point revolving around ice baths and filling empty stomachs. In any case, Arts managed to put 3 in before the end of the match.

(No pictures of the Law-FASS match were taken; no one cared anymore)

But here’s a (related) picture of the Industry Spy training an Arts student: 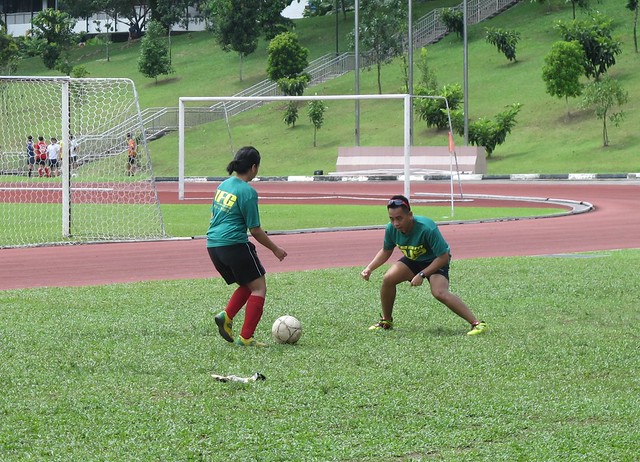 Following the conclusion of the exhausting opening festivities, an afterparty was then held at the local Hwang’s at Utown, where sources confirmed an exclusive list of attendees enjoyed complimentary bottles of 100 Plus, while indulging in Bulgogi, providing conclusive proof once and for all that models were capable of consuming carbs.

Many spectators told reporters that they had thoroughly enjoyed Law’s collection and are looking forward to another brilliant display during the Law-Med Games. Also reputed to be launching during Law-Med is the exclusive ‘Body O’Dior’ eau de toilette, since there is a profound belief that ‘smelling positively bewitching should be the right of everyone, not just a privileged few’.