The Law IFG Netball team performed credibly against all odds to finish 4th in Group B at the group stages which took place at the SRC Outdoor Courts on Saturday, 31 August. 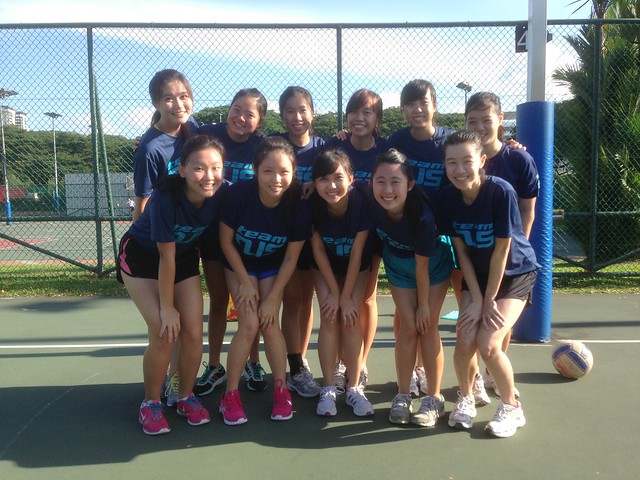 Our girls were placed in a tough group alongside traditional powerhouses Engineering and Science. SDE and Dentistry made up the remainder of the group. The rules of the game were modified for IFG — with each quarter being 5 minutes instead of the usual 15.

Law kicked off this year’s campaign against defending champions Engineering. We started off on a positive note with Li Ting and Annette working together to blunt the resulting attack from Engin’s centre pass. In spite of this, Engin took the lead on the 50-second mark. From the resulting centre pass, our Goal Shooter Xue Kun missed the opportunity to open her account for this year’s IFG when her shot rebounded off the rim.

The girls seemed really up for the game and closed their opposing number down promptly each time — Chances were few and far in between and turnovers aplenty as both sides fought for control in the centre. On 3 mins, Goal Attack Yizhen went agonisingly close to scoring and our defence coped well from the resulting Engin breakaway with our Goal Keeper Li Ting standing tall on that particular occasion. 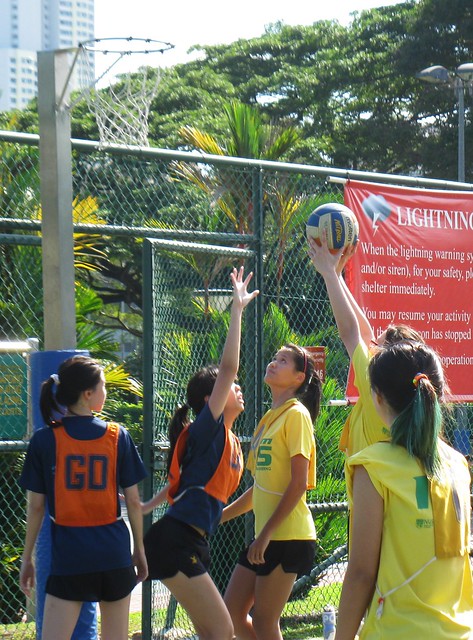 With one minute left in the first quarter, our dogged resistance was finally broken as Engin doubled their lead. As Q1 drew to a close, some nice passing dictated by our captain, Eunice, led to an excellent chance at the death which Yizhen failed to convert. Engin went through the gears after the break and put their height advantage to good effect as they raked up 5 goals on the trot from centre passes. 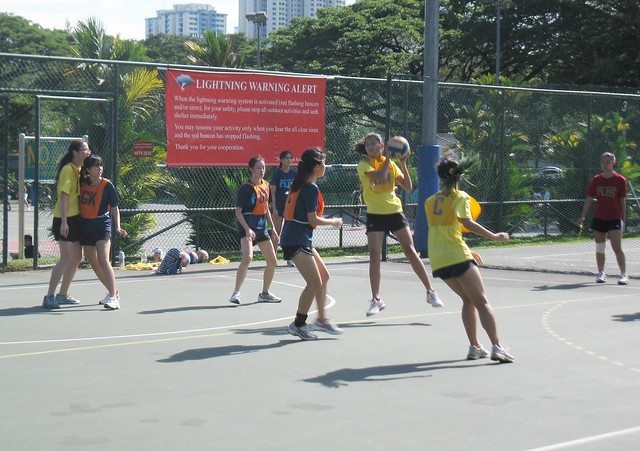 Looking for options… but only seeing a sea of blue shirts

The second half saw an improved performance from the girls as they stood firm against the relentless wave of Engin attacks. Xue Kun finally opened the scoring for Law three minutes into the third quarter when she converted Natalie’s punt into the “D” coolly from two metres out. Despite Law having a lot more possession this quarter, a combination of unforced errors and some clinical shooting from Engin meant the quarter ended with the score at 1-10.

Eunice took the chance to rotate the squad for the last five minutes of the match in order to give everyone some valuable playing time. Engin kept much of the same team that started the match and the match ended with Engin emerging victorious.

Xue Kun (on scoring the only goal and on the team’s performance): “It was a breakthrough.”

“The first game was frustrating because we did not have the chance to play friendlies against other teams [prior to IFG]. This match was our first after training. It was therefore more competitive and we were not used to the intensity. Furthermore, we were unfamiliar with the techniques [the Engin team] used as they have a lot of ex-school players.  Hopefully we’ll perform better against Dentistry.”

Goal Shooter Xue Kun scored the decisive goal with 20 seconds to go as the team did Law school proud by clinching an important morale-boosting win against Dentistry.

The match started off on a frantic note as team captain and centre Eunice sought to disrupt Dentistry’s passing rhythm and cut off their attackers’ supply line. The resulting break allowed our Yizhen to open Law’s scoring for this match and hers for the tournament with a spectacular attempt from the edge of the “D”. Buoyed by this momentum, the team out-passed and out-sprinted Dentistry to convert centre passes into two quick goals through Xue Kun. Three minutes in, Xue Kun scored her third from a rebound after Yizhen had hit the rim with her initial shot.  A quick turnover initiated by Eunice who was pulling the strings in the center court led to Xuekun scoring her fourth goal of the match thirty seconds from the end of the quarter. Law led Dentistry 5-1 at the end of an entertaining first quarter.

The feisty Dentistry team scored two quick goals at the beginning of the quarter to reduce the deficit before Eunice, Yizhen, Valencia and Natalie led the recovery which culminated with Xue Kun scoring a goal off her own rebound. Dentistry fought back immediately with a goal after a scuffle in the “D”.  Xue Kun scored her sixth soon after good work from Yizhen and Natalie as Eunice re-imposed her authority in the centre third.

Q3 saw a few substitutions as Eunice withdrew herself from the action after her scintillating performance in the previous two quarters. Kelly entered the fray as the GK with Liting moved to GA, Annette WA and Natalie replacing Eunice as Centre. Xue Kun scored two back-to-back goals at the start of the quarter before Dentistry upped the pressure and clawed down the difference to just two goals near the end.

Eunice returned to the court at the start of the last quarter and continued where she had left off previously. The team needed to hang on to a fragile two-goal cushion and Yizhen eased some of the pressure as she scored to open up a three goal gap midway through the quarter.

With only two minutes left, our talismanic captain Eunice retired hurt with an ankle injury as she landed awkwardly after an accidental collision with her counterpart after she had successfully intercepted a loose Dentistry pass. A time-out was called as Eunice was helped to the side of the court by the rest of the team in a heart-warming display of camaraderie and team spirit. This turn of events necessitated Jia Hui’s entry as Wing Attack with Natalie moving to Centre in order to see off the remainder of the quarter. Dentistry sensed an opportunity to win the match and duly scored two quick goals to narrow the deficit to a solitary goal (10-9). It was left to a cool and composed Xue Kun to dash their hopes at the death after great play by the team. 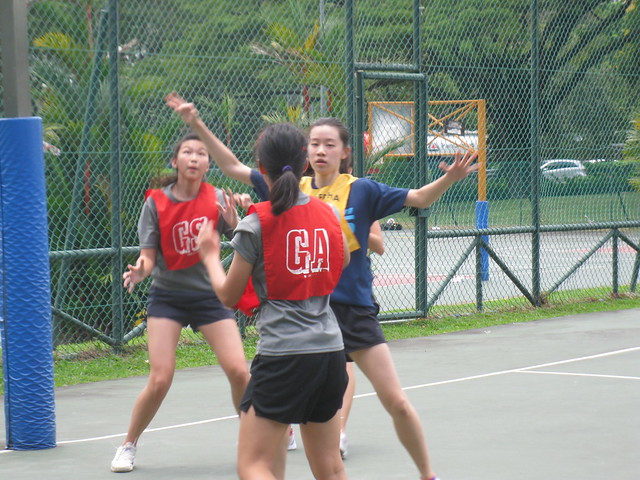 Annette, along with the rest of the team, was in inspired form against Dentistry

Ex-DHS netball player Yizhen told JUSTIFIED: “The first quarter made a lot of difference and helped us out in the next few quarters — especially after Eunice was injured in the last quarter”.

With Eunice injured, it was up to senior squad members Natalie and Annette to galvanise and carry the team in the last two matches.

Championship contenders Science ran out comfortable winners against a depleted Law side shorn of both their inspirational captain and substitutes. Naturally, fatigue was a factor Law had to contend with while Science, with a squad size twice that of Law’s, could afford to rotate their players.

The first quarter saw an attacking Science team made full use of their height advantage to plunder 6 goals without reply. Although Xue Kun scored twice in the second quarter, which also saw Li Ting playing her heart out for the team at the heart of defence, Science’s colossal lead was never really threatened as they eased to a 10-2 lead at half-time. 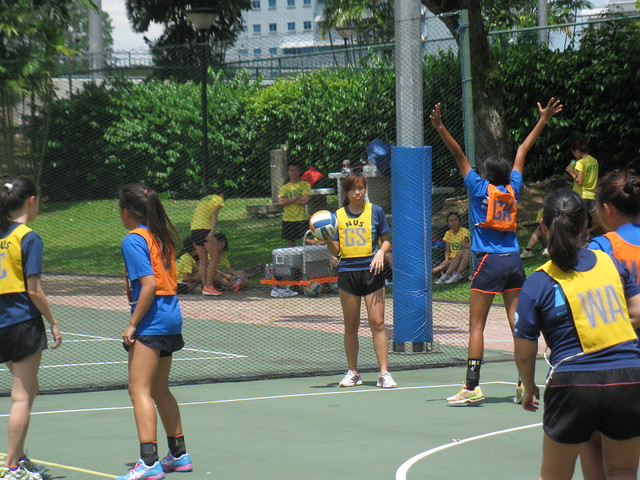 Xue Kun led the charge with two goals before half time 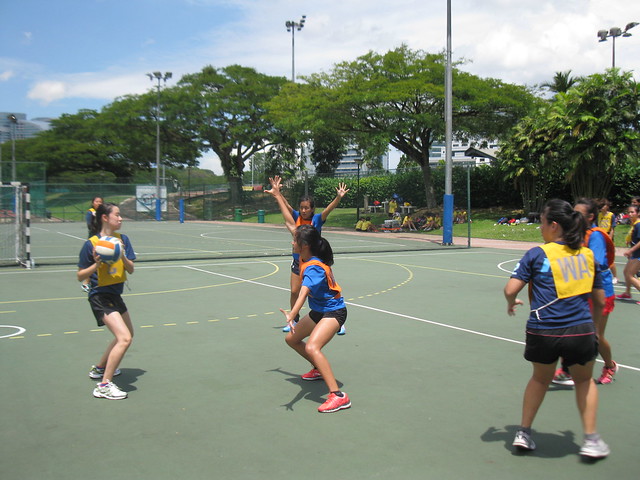 Annette dictating play as the Centre in Q2

The start of the third quarter saw Felicia and Annette replace Valencia and Li Ting as Wing Defence and Goal Defence respectively, with Natalie as Wing Attack and Jia Hui as Centre. The changes paid immediate dividends as Xue Kun added a goal after good passing between Yizhen and Natalie. Yizhen added another towards the end of the match but Science’s victory was never in doubt. 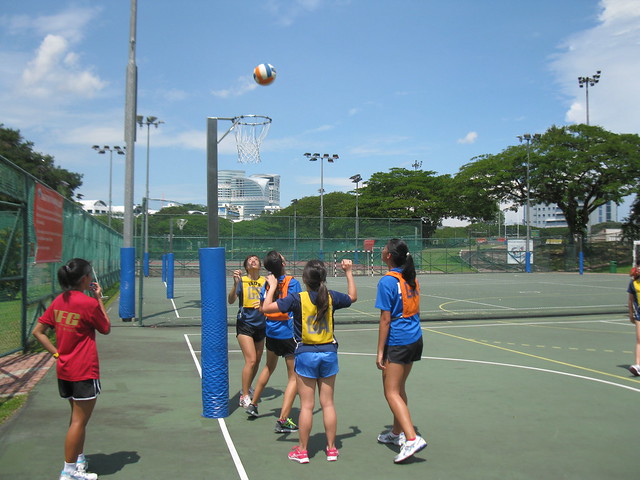 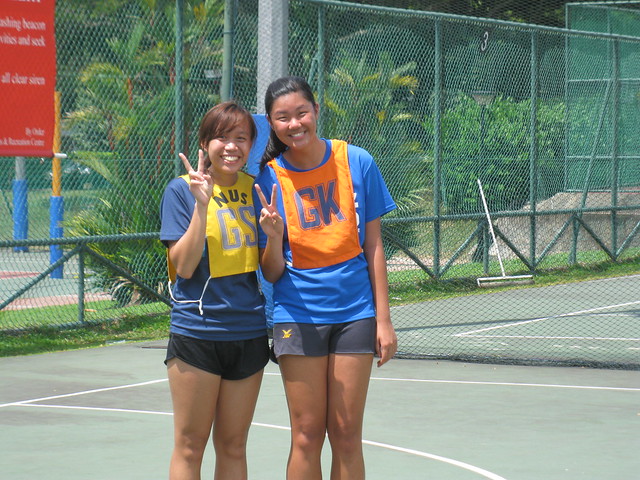 Competition aside, IFG should be all about making new friends

Prior to the final group stage match against SDE, JUSTIFIED overheard Yizhen prepping the team with the following inspirational words: “Guys just have fun. Fight for every ball — better than what we did against Engin and Science. æ­»ä¹Ÿè¦æ­»å¾—å…‰è£.” (For non-Chinese speakers, she meant that even if [we] must die, [we] must die gloriously)

With both teams effectively out of the semi-finals by now, SDE grabbed third place in Group B after a few inspired substitutions saw them overpower an inexperienced and tired Law team in the second half.

Xue Kun got Law off to a dream start by converting the first centre pass of the match to put Law ahead. Although SDE replied off a centre pass of their own, Law fought back to take a one-goal lead into the break through Xue Kun via our telepathic attacking trio of Natalie, Annette and Yizhen.

With Law unexpectedly in the lead, the second quarter started in controversial circumstances as Xue Kun’s goal was disallowed after some confusion in the “D”. Xue Kun made amends soon after though by putting Law 4-3 up after a glorious passage of play which saw every Law player involved in the build-up. However, SDE’s fresher legs began to make a difference as they rebounded with two goals before Xue Kun’s last-gasp goal ensured parity at the break. 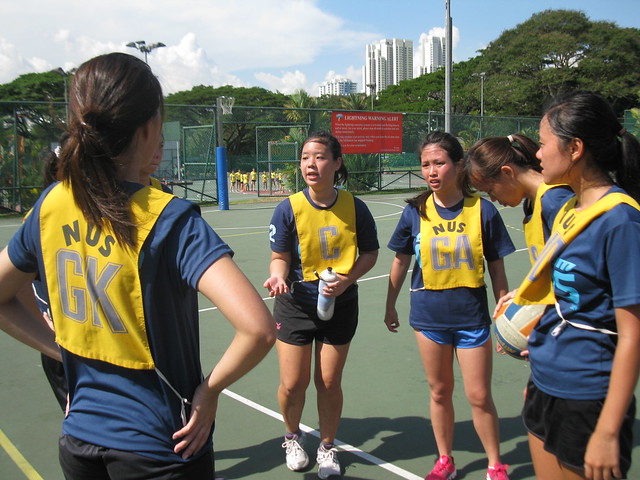 Natalie delivering a pep talk during the interval

In the second half, SDE changed their line up and introduced a few experienced players in a bid to wrest control of the match from Law. Cheered on by their supporters, SDE quickly built up a formidable advantage. And although Xue Kun kept Law in the game with a goal in the opening seconds of the last quarter, SDE stretched clear in the remaining minutes to win the match comfortably. 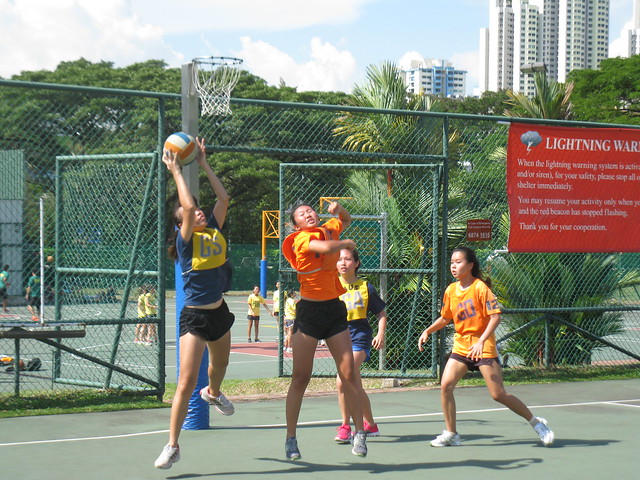 Our star shooter Xue Kun defiant until the very end

Law captain Eunice Chiam: “Our team was awesome today and I’m proud that every player was giving their best. The girls did a commendable job although some of them only picked up netball 3 weeks ago! Special mention must go to Li Ting, who despite being new to netball, played wonderfully in her role as our main Goal Defence. And Yizhen was amazing to have maintained her stamina and accuracy despite having to play Goal Attack for all 4 matches. I’m also glad to see new players like Kelly bravely step up to their roles in the last few matches! Most importantly, I’d like to thank the girls for being an enthusiastic and wonderful team throughout, and for (literally) supporting me when I was injured.”

“The team improved a lot for the Science match. Our morale was immensely boosted with the sharper shooting of our shooters— and of course not forgetting the sumptuous ‘picnic’ prepared by our team managers Ben and Kenneth.”

“I’ll really like to thank the Year 3s — Natalie (last year’s captain) for being a key player in the mid-court (despite having to rush off to represent Team Law in Basketball in between the Science and SDE matches) and Annette for leading the defence too — they carried the team well with their guidance and expertise.”

A coda on the role of Team Managers 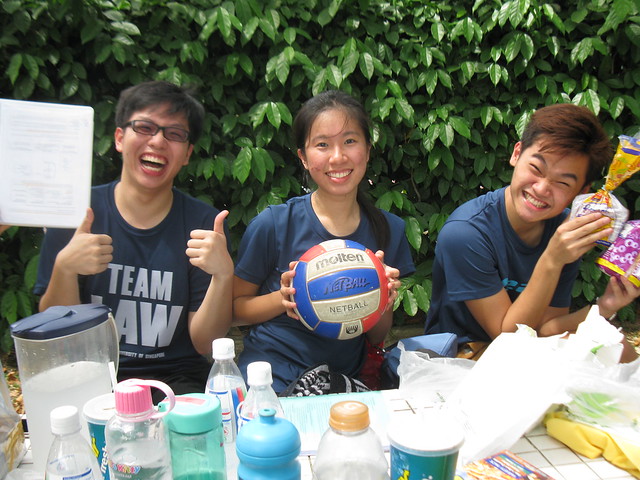 The netball team will like to express their sincerest thanks and gratitude to their team managers Kenneth and Benjamin who dutifully settled all administrative issues and bought lunch, refreshments (chilled 100-plus, grapes and even bananas) for them. The team managers stayed throughout the match and even barked out instructions from the touchline when the team captain, Eunice, retired hurt. They also acted as time/score keepers for the umpires when they were not busy discussing their answers for the upcoming Company Law tutorial.