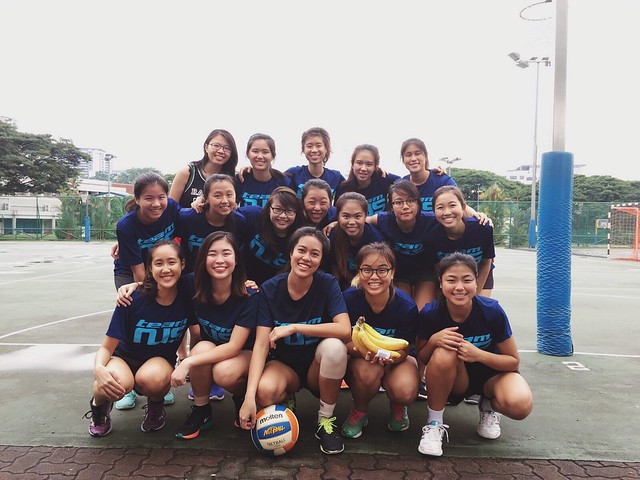 After several false starts, the Netball IFGs, which were postponed once due to the haze and then again because of the rain, kicked off at 12.30pm at the Netball courts near Utown. I arrived at the tail end of warm-ups and players were doing last minute stretches, trimming their finger nails to pass the inspection later and getting some final goal shooting practice in. I was warmly introduced to the team and the atmosphere was friendly and relaxed, but there was a nervousness and tension underneath it. These players had put in months of hard work and they were eager to prove themselves. 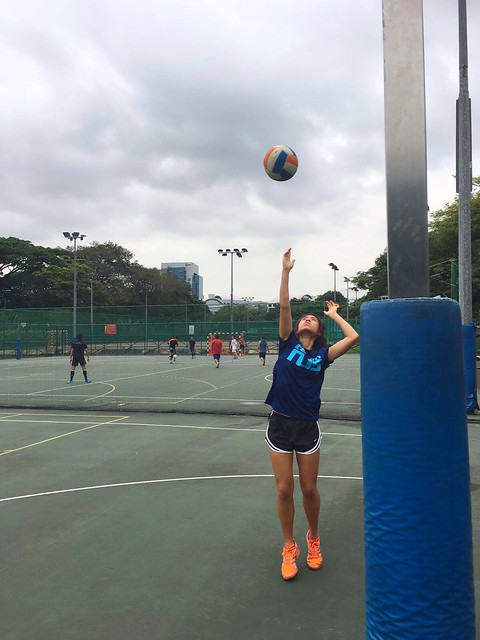 Rachel warming up before the games.

Team co-captain Melissa told me before the games, “We are quite confident. We have a very good team this year” and I was inclined to believe her. As I would see later on the courts, it was a cohesive team that worked together very well and strongly supported one another. There was no diva behaviour, no single person hogging the ball for most of the play time, and no sense that certain players had to pick up the slack for others. Everyone just worked hard together and did their very best no matter what position that were playing in.

The sense of team spirit and mutual encouragement and support was perhaps best embodied in the pre-game pep talks, which were led by member Siu Ming. As they were huddled together, Siu reminded her teammates, “Just remember everything we went through in training. Just calm down. […] I think we have a really good chance [this year].” Melissa added, “and we love each other!” to the laughter of the team.

The first game was against the heavyweight Engineering faculty and everyone was on guard from the beginning of the game. Engineering scored two points in quick succession and our Law players fought hard to close the gap in points. There were some good passes between the Centre (Siu Ming) and the Goal Attack (Deborah) in particular and Law scored two points in the first half, but the Engineering continued to hold the lead with 6-2 at the end of the first half. Law upped their defense in the second half, and Goal Defense (Sabrina) was notable in her efforts to steal the ball from Engineering and place the ball back in Law’s hands. 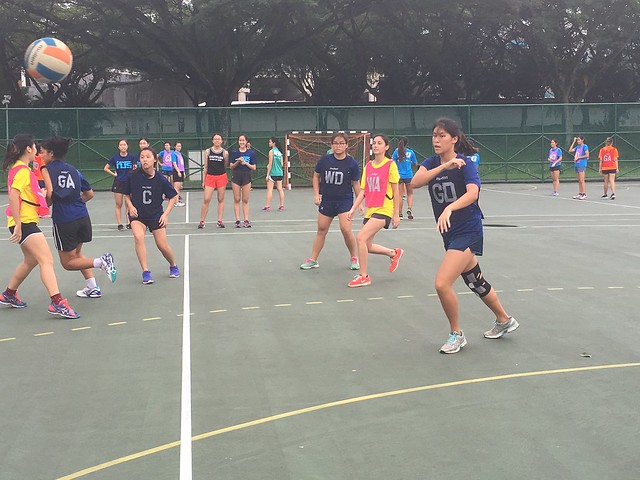 Goal Defense (Sabrina) sending the ball back to towards Law’s hoop.

The subsequent Goal Attack (Rachel) and the new Goal Shooter (Deborah) acted smoothly as a team and both scored several points in the second half. Law definitely put up a stronger showing in the second half of the game, and they narrowed the gap between them and Engineering, but Engineering still won 8-5.

The next game was against Computing, and after their earlier defeat, the Law team was keen to make a comeback. Goal Attack (Rachel) was the first to score a point, which boosted the confidence of the Law team. It was a fast and hard game, and players were rougher with one another, which resulted in an injury sustained by Law in the first half. Wing Attack (Natalie), who had provided a strong offense for Law, fell and was taken off court to have her wound treated while team member Siu Ming quickly stepped in to replace her. In spite of their unexpected member replacement, the team did Law faculty proud by maintaining an aggressive offense and a solid defense and eventually won the game with an excellent score of 9-2. 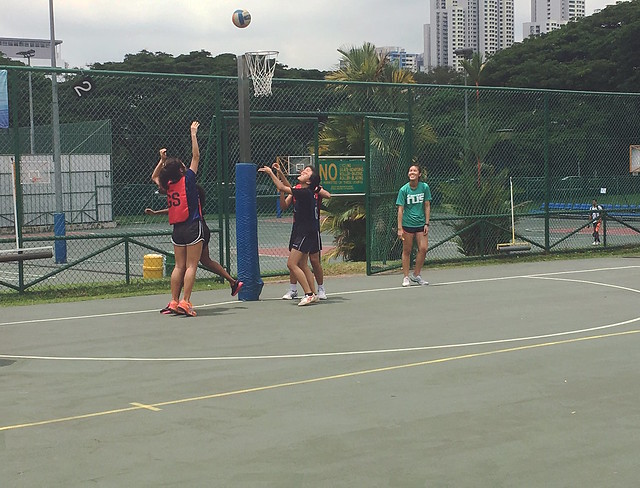 Yet after this success, Law was paired up with Science faculty, which had already established itself as a powerhouse as it had crushed both Computing and Yale-NUS in prior games. The Law team led at the beginning of the game with 2-1. The pace of the game picked up and players were tense as they tried to hold the lead and block Science players. However, towards the end of the first half, Science caught up quickly and gained the lead in spite of valiant attempts to defend against them. Unlike in previous games, no changes to members were made during half time, and the same set of players returned to court, focused and determined to go down fighting at the very least. 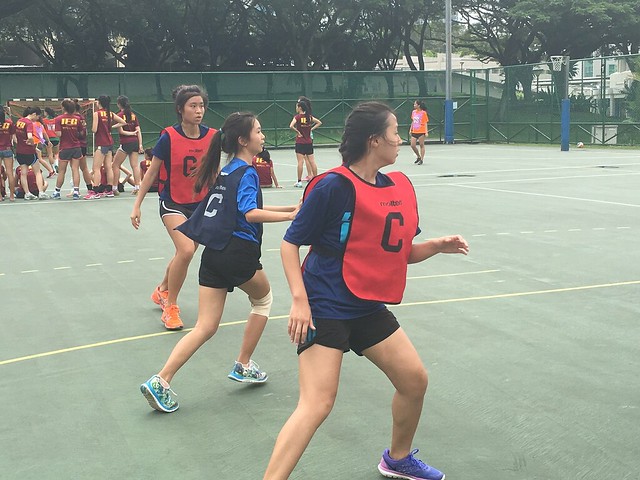 Centre (Siu Ming) and Goal Defense (Rachel) about to spring into action.

The Law team went even harder on the offense, and Goal Shooter (Andrea) was particularly fierce in the second half. The pace of the game turned punishing, and more injuries were sustained as Wing Defense (Belle) also fell but admirably, got up immediately and returned back to the game. The gap between Law and Science widened with Science in the lead. In the last few minutes of the game, Andrea attempted to score a point from further from the hoop, but the whistle went off as she made her shot and alas, Law loses to Science 4-9.

Our chances of heading to the Netball IFG finals were quashed since we had lost two games, and the final match against Yale-NUS was approached mainly as an opportunity to allow members, who had not had an opportunity to play in earlier matches, to test their skills now. The atmosphere was more relaxed in this game, but it quickly grew strained as the Yale-NUS team puts up a strong fight in the first half. 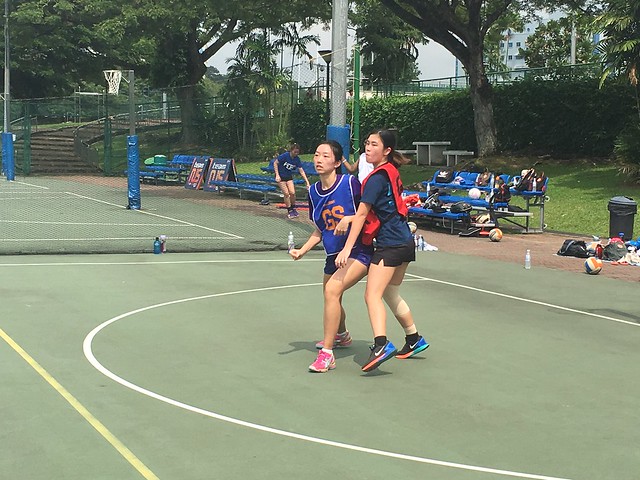 Players strove to defend against Yale-NUS and both teams were neck and neck in the game. The first half ended with a tie of 4-4 and players grimly returned to courtside, where the decision was made to swap players out for more experienced members. Siu Ming returned as Centre, Belle as Wing Defense and Rachel as Goal Shooter. It was a frantic and frenzied game with sharp passes and quick movements, as both teams tried to get ahead of the other. It was an extremely close fight and although Yale-NUS temporarily got the lead, the score evened out to a tie of 6-6.

I normally don’t enjoy watching or playing sports but I was pleasantly surprised and actually genuinely moved by the team’s strong sense of camaraderie and their constant support for one another. 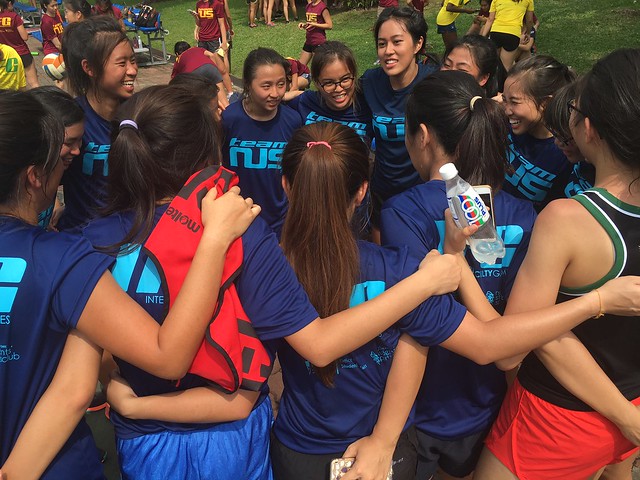 All smiles at the end of a long hard IFGs.

During every game, members would stand on the sidelines and cheer for their counterparts on the court, and I would often hear calls of “Go Nat! Go Deborah! OMG SIU!!!!!!!!” Even though it was a competition, I felt that it was also a celebration by the team and for the team. Even after games with less stellar results, there was disappointment but no finger pointing or blaming of specific members. There was no resentment or frustration, just a deep and abiding sense of ‘we’ll just do better next time’. Standing there on a hot Saturday afternoon, I was really proud of the Law netball team. And I still am.


An Apology on the Recent Matter