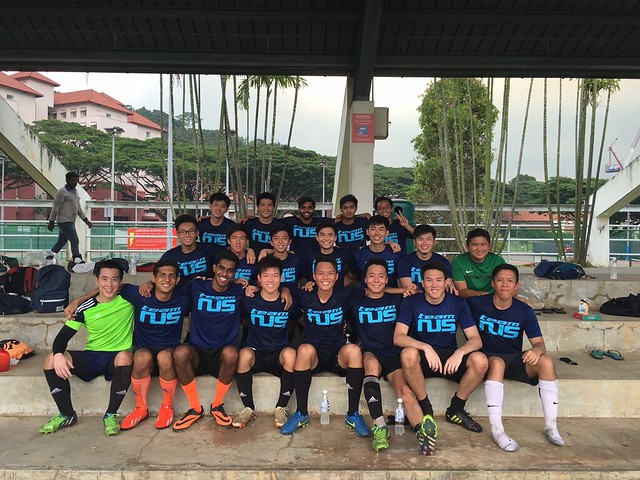 Kids, it was Semester 1 of AY 16/17 and I’m going to tell you the story of how the Law Men’s Football team started its long and arduous journey to the summit (no pun intended). Our boys fought valiantly and courageously over 3 (THREE!!!) weekends, so the least you could do is to read until the end of the article to find out how we did.

The preliminary rounds got off to a bumpy start, with the first day of matches postponed due to the outbreak of haze. As a result of the last-minute changes in schedule, it seemed that we may not even have had enough players to kick off our first game against Arts. However, through the rallying cries of our inspirational leader, captain Josiah Tham (Y2), supper plans were cancelled, hundreds of pages of readings were foregone, and we brought a near full-strength squad to face off against one of our main rivals for a place in the semi-finals.

And woe to those who stood in the way of our precious Sunday nights. The law team came out with guns blazing and made the best possible start. 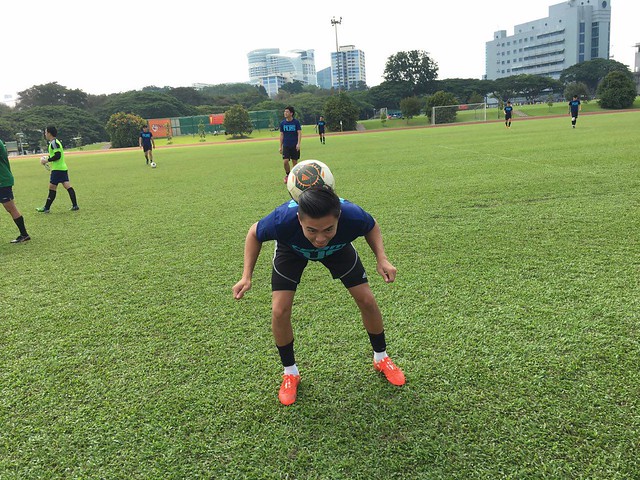 Nick (Y2) showing off some sick tekkers during warmup.

In the opening minutes, superstar winger Darren Low (Y3) bravely lunged in to meet Nick Yap’s (Y2) cross from the right. He beat the Arts keeper and his marker to the ball, and headed in the first goal of the game.

But we were not done just yet. Soon after, Marcus Lee (Y2) spotted Benedict Tan’s (Y1) run and split open the Arts defence with a perfectly weighted through ball from defence. Still left with plenty to do, Ben easily outpaced the defenders and managed to stroke the ball past the keeper. We were 2-0 up within the first ten minutes of the game.

Despite our best efforts, however, we were unable to add to the scoreline for the rest of the match, and it ended with a 2-0 victory. Special mention goes to Team Law’s goalkeeper, James Lek (Y1), who came to the rescue on multiple occasions. Indeed, it seemed at times as though we had a brick wall covering the surface of our goal. James, putting on a man-of-the-match performance in the second half, produced several stunning saves to preserve our two-goal advantage. Props. 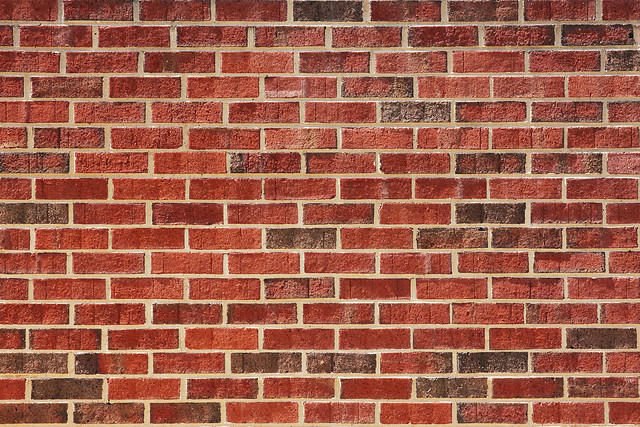 Picture of James Lek (Y1) in action against FASS.

The very next weekend, we started off the day with a game against the School of Computing. We knew that victory here would all but secure our place in the semi-finals. And while we did not have the same explosive start that we did against FASS, it was a matter of time before our continued dominance produced results. 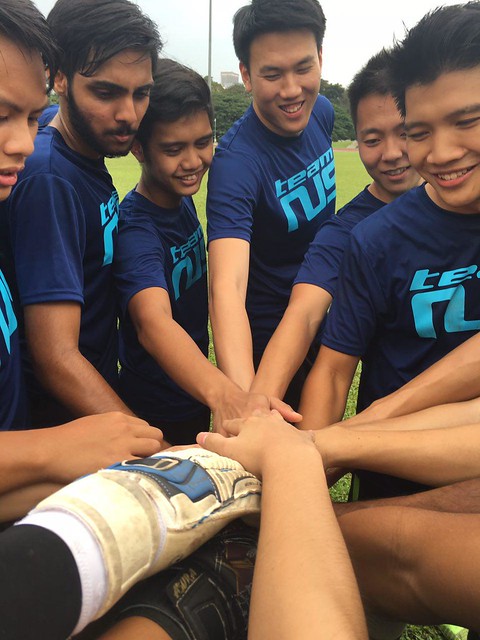 Our boys ready for the challenging day ahead.

In the dying seconds of the first half, Darren cut in from the left and fired a fierce shot that Computing’s keeper could not hold on to. Ryan Ong (Y2), the driest player on the pitch having just been substituted on, was well-positioned to convert the rebound and put us 1-0 up. Team Computing’s appeals for offside were in vain as the referee blew the half-time whistle.

“Your hair still perfect sia!” quipped Nick to Ryan, as the teams walked off the field. And indeed it was. 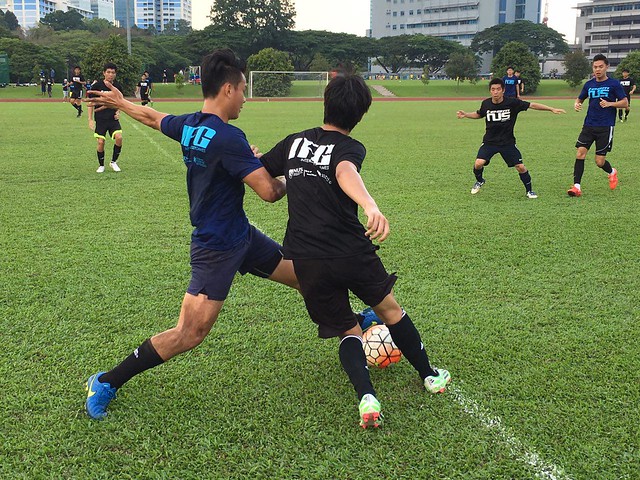 Captain Josiah (Y2) showing his opponent that it’s all about the girth. 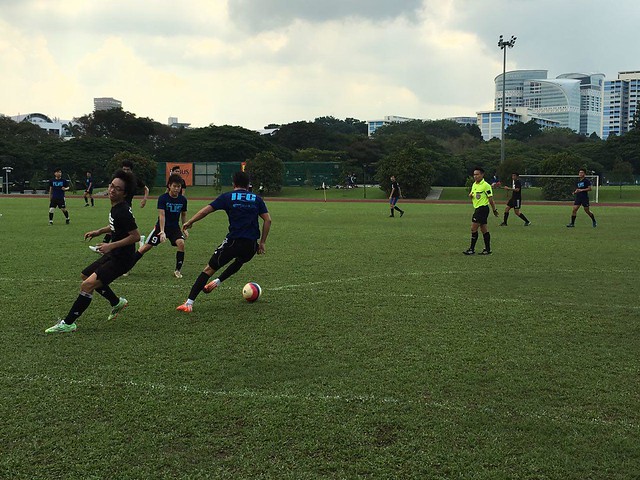 Nick (Y2) sending his opponent back to Kent Ridge MRT with a clever change of pace.

The second half got off to a less than promising start, with Team Computing tying the game at 1-1 with a well-taken free kick. This was not helped by midfielder Marcus Hoh (Y3) needlessly picking up a yellow card for a typically over-aggressive challenge. This seemed to reinvigorate our opponents, but it was not the day we would be denied our rightful ownership of a semi-final place.

It wasn’t long before Ryan (Y2) scored his second goal of the match to restore our lead at 2-1. Hungry for more, we persisted in searching for a third goal, and Jayden (Y4) delivered with the last kick of the game, thumping a free kick past the wall and the keeper to make it 3-1 and put the win beyond all reasonable doubt. 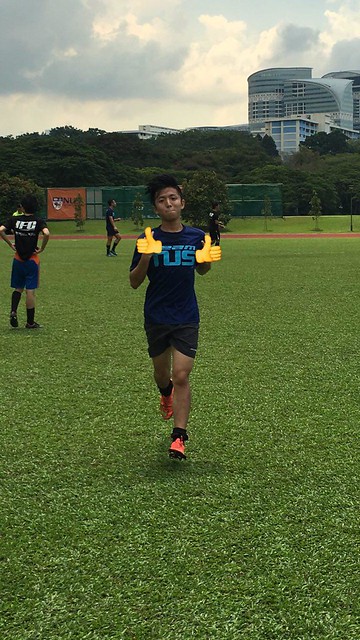 Ryan (Y2) giving the camera two thumbs up after scoring his second goal to make the score 2-1.

This was an age-old rivalry that had existed since the dawn of time. Both teams were now fighting for top spot in the group, and it was clear to everyone that this would be a tough game.

The first half saw plenty of scoring opportunities for both sides. Midfielders Josiah (Y2) and Benedict (Y1) completely disregarded the concept of medical consent, repeatedly penetrating the gaps in Medicine’s rearguard. However, Team Medicine showed a commendable grasp of the s 96 right to private defence, and provided some deep penetration of their own in return. 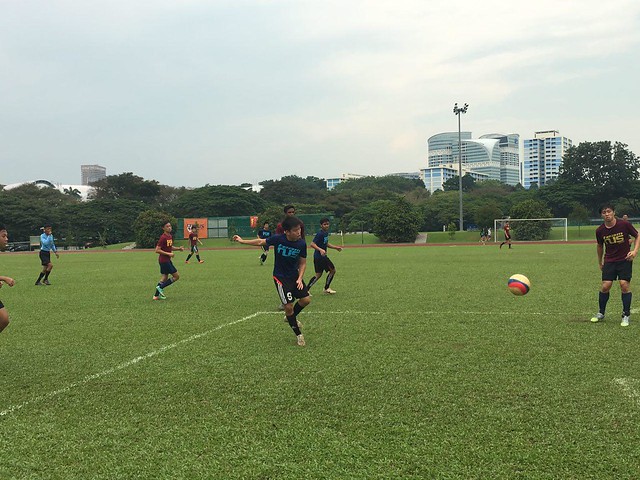 Benedict (Y1) starting an attack with a long pass. 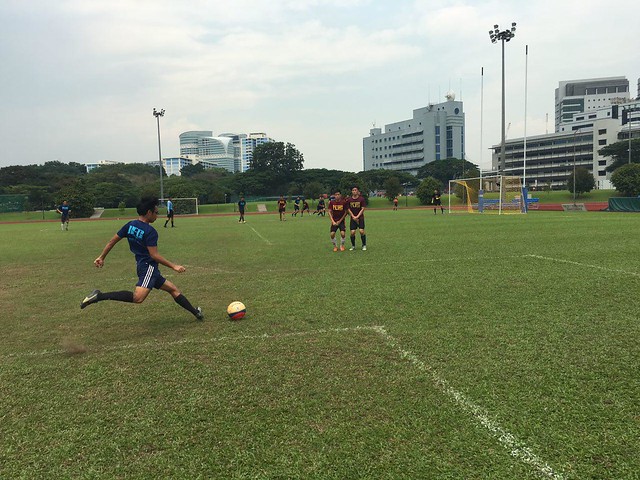 As the first half ended goalless, Captain Josiah provided some words of encouragement, along with sound tactical advice:

“Just shoot more, they don’t even have a proper keeper la, that guy play frisbee one I think.”

Brimming with motivation, Team Law played their hearts out for the second half and still ended the game at 0-0. Much to our captain’s surprise, Medicine’s frisbee-playing goalkeeper produced quite a remarkable save to deny Darren from scoring the winner right before the final whistle. Nevertheless, this result virtually guaranteed that we finished at the top of the group going into the semi-finals.

Rumour has it that Team USP heard tales of Team Law’s rapid rise to the top of Group B, leaving a trail of destruction in its wake. Fearful of becoming our next victims, they decided to forfeit the game.

Just kidding. But they really did not show up, so we won by default.

But the course of IFG glory never did run smooth. Further late changes to the schedule meant that we would play the final stages of the tournament with the bare minimum 11, and were missing several key players.

We faced off against a Science team that had twice our numbers. Undeterred, Team Law put up an admirable team performance, showing no signs of fatigue despite the vast numerical disadvantage. While we had several chances to snatch victory towards the final minutes, the game ended at 0-0 and would be decided by a penalty shootout.

And this, kids, is where our fairytale was brought to a premature conclusion, and we were eliminated by a narrow margin of 4-3 in the shootout. Subsequently, Engineering’s no-show meant that we finished this year’s IFG in a very respectable 3rd position. Congratulations to the 22 who proudly represented Team Lawsku to help achieve our highest placing in recent memory. Further congratulations to Team Medicine on winning the final to become this year’s champions, we’ll meet again at LawMed 2017. 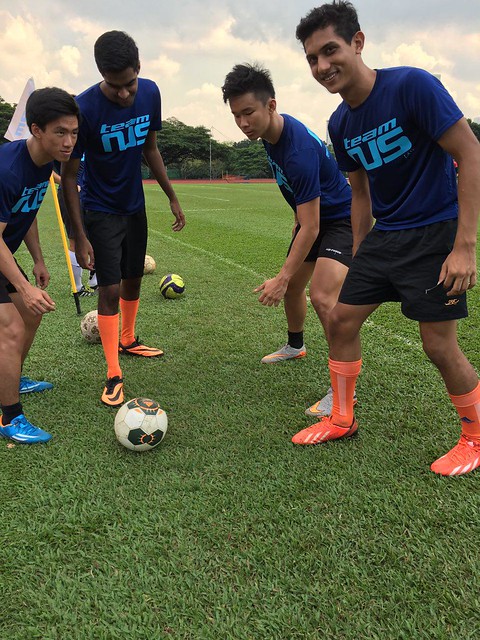 Just some cute Y1s having fun with my phone.