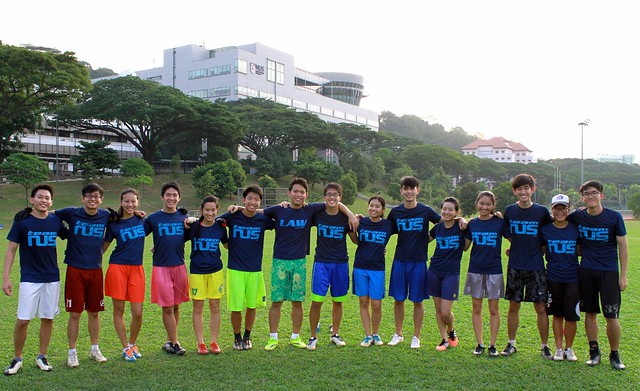 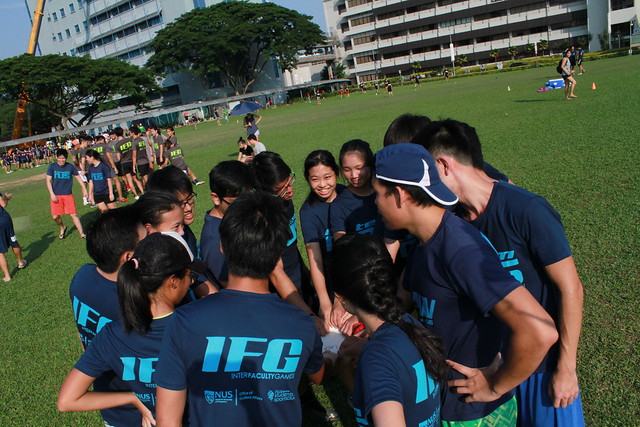 As captain Timothy (Y2) aptly described it, “This is the match to be relegated in the deepest recesses of our memory, never to be mentioned again.” Law’s first match of the day against Dentistry proved to be a heartbreaking experience for the team. The game proceeded evenly at first, with the O Lines from both teams going back and forth, earning points for their team. The critical point of the game came from a turnover from our side which quickly widened the gap to 4-6, with 1 minute left on the clock. Despite our valiant efforts, we were unable to close the gap and the final score was a depressing defeat of 5-6. 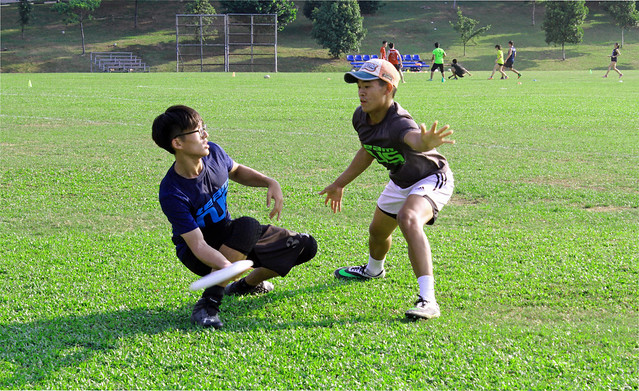 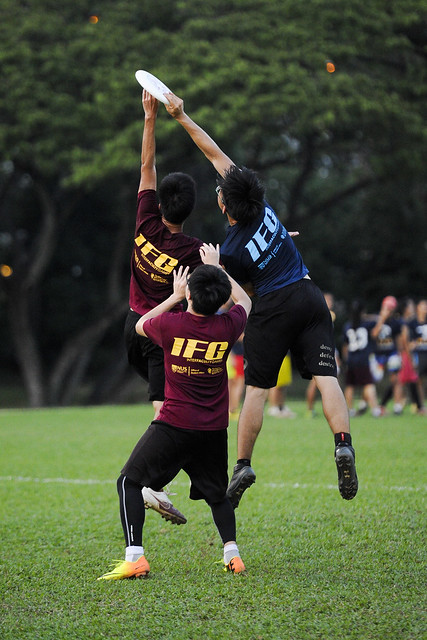 Jamin (Y1) with a huge sky over Leal of Medicine

The highlight of any IFG match is probably always against our doctor friends. Fueled by the Law-Med rivalry, our players were raring to go against the defending IFG Ultimate champions. Boasting a stacked medicine team with the likes of Lih Khuang (sUNIg), Reyor Ko (represented Singapore in 2012), Raga (1.92m), our players had nothing to lose.

Medicine opened with a coordinated play, earning them the first point of the game. Undeterred, our O Line slowly controlled the tempo of the game, equalizing with a series of short passes. The breaking point of the game came when we were down 3-4, with just 3 minutes to go. An opportune turnover led to a ridiculous layout by Jamin (Y1) (one of the many throughout the match), receiving a hail-mary pass from the opposite end of the field, equalizing the score 4-4. With just one minute left on the clock, the medicine guys were obviously unsettled by the tight scoreline (especially since they wrecked us at Law-Med 2014). This anxiety led to an uncharacteristic turnover, allowing Jamin to complete another insane layout from down the field, leading to a dramatic finish of 5-4. This may well be the first time Law has won against Medicine in Ultimate Frisbee (the writer is unsure of the accuracy of this statement) 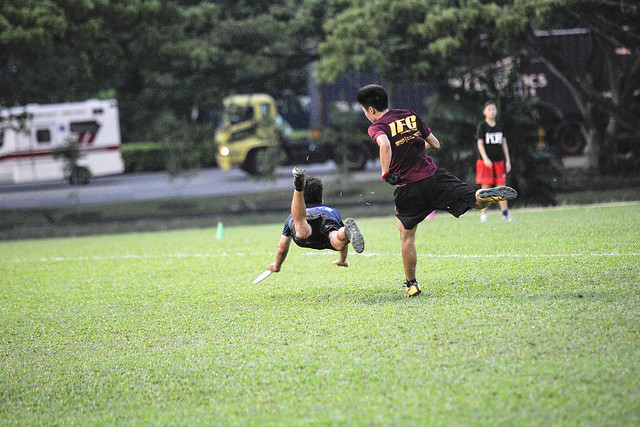 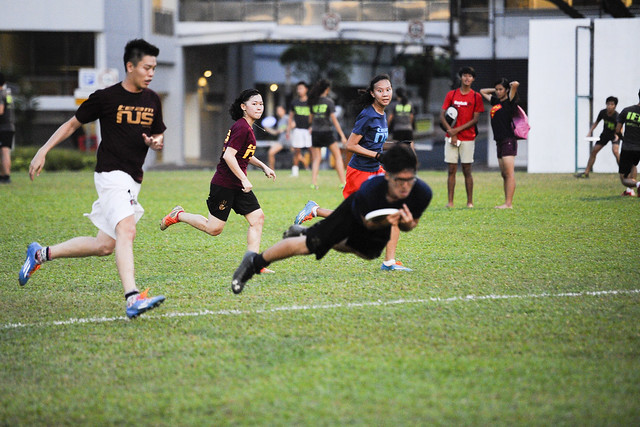 Somebody please put out the fire

Unfortunately, the rest of the preliminary matches were played in arguably poor lighting, and there are no photographs to document the carnage that our players left in their wake. Nonetheless, Law stormed to convincing wins against SDE (7-1) and fellow semi-finalist contender, Business (6-3). The defence line was instrumental to these victories, keeping up an intense defence that forced their opponents to make mistakes.

The Semifinals (How many of our articles even get this header?)

Law began our second day of competition with our last preliminary match against SOC(5-3). Ultimately even though we lost our semi-final match against Arts and our 3rd/4th placing match with Medicine, the writer would like to draw your attention to our single win against Medicine the day before (because how often can we say we beat Medicine on the field?) 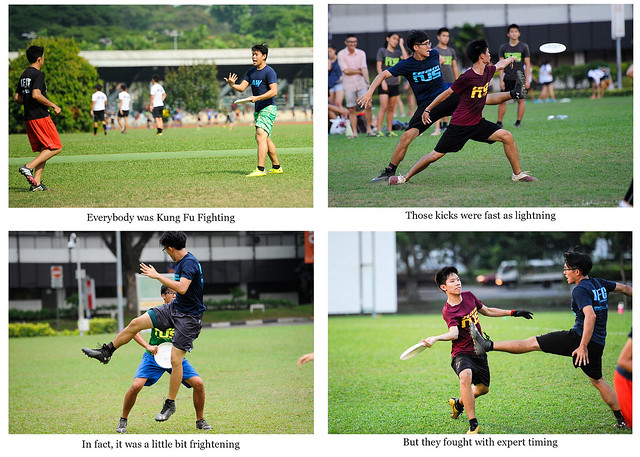 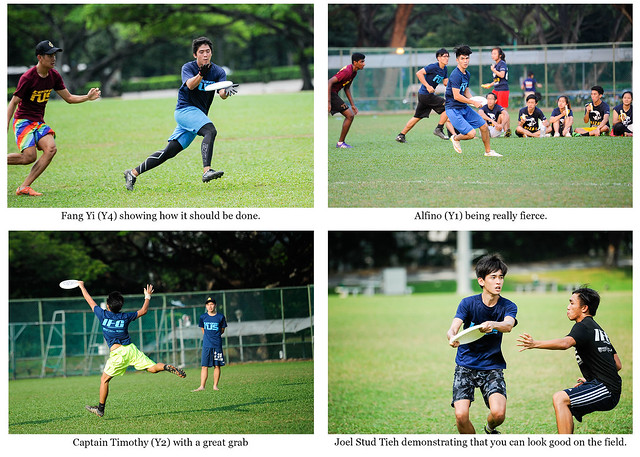 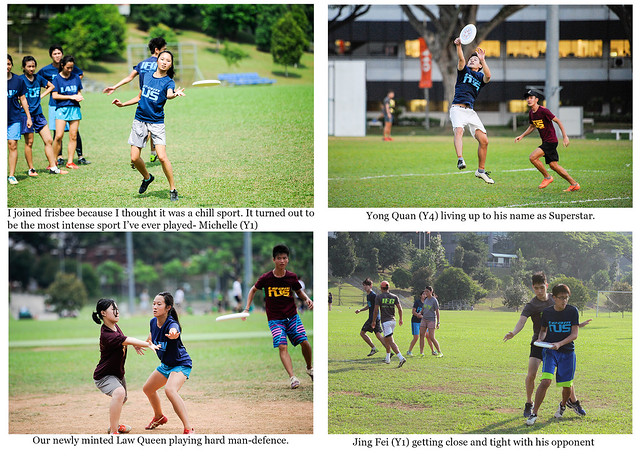 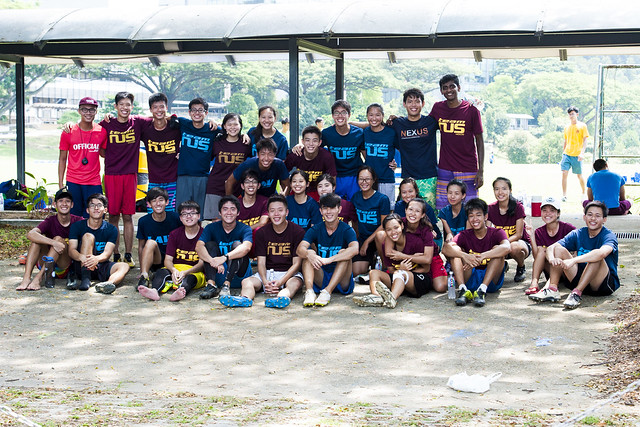 Happy faces after friendly competition
With the end of IFG Ultimate Frisbee 2015, we would like to thank everyone who had helped and supported us in one way or another. Special shout-outs to Sabrina (Y1), Chuan Ri (Y1), Zhe Fei (Y4), Hao Jin, Kenneth Lim (Y1) and our Grundnorm alumni.