Jessup Moot Practice Round (with Drew and Napier LLC)

Today, the 2012 NUS Jessup team mooted before a distinguished panel of Jessup Alumni from Drew & Napier LLC.  Although it was a merely a practice round, it was (in the writer’s opinion) one of the most memorable moots ever!

Unlike regular local moots organized by the Mooting and Debating Club (MDC), the Philip C Jessup International Law Moot Competition is an international moot, i.e. it involves international law and is opened to countries all over the world. The Jessup Moot, as it is affectionately called, is the most prestigious moot in the world. It involves a hypothetical case that is argued before the International Court of Justice on issues of international law. It is organised by the International Law Students Association (ILSA) and held in Washington DC. NUS has been participating since 1973 and it has the best record of any school worldwide in this competition. NUS has won the competition four times and has been Runners-Up six times. Since last year, NUS had to vie with SMU in the National Rounds for the chance to represent Singapore in the Jessup moot. Fortunately, NUS has prevailed in both instances.

Against this backdrop of esteemed reputation, it was really a joy to be able to witness the 2012 NUS Jessup team in action, in their preparation for the Jessup moot. It was this great expectation and anticipation that the moot court was fully-packed with audiences, many of whom even had to sit on the floor. Rumour has it that some year-one LAWR classes (which have tutorials on Mondays) were even instructed to attend the moot as part of their tutorial. 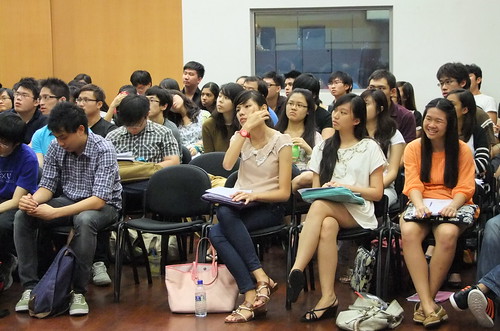 To add on to the prestige of this practice round was the illustrious bench of judges, which without doubt was the star attraction. 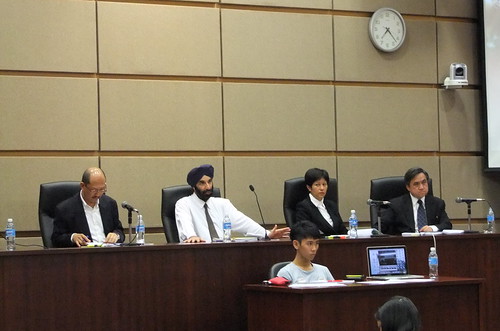 So it was these demi-gods-litigators-as-judges against our 2012 NUS Jessup team: Alvin Yap and Sadhana Rai, for the Appellant, and Kevin Lee and Dashini Prasad for the Respondent.

The audiences were in a state of awe at the standard of mooting displayed, which was indeed befitting of Jessup (yes, the sheer reputation of Jessup moots establishes “Jessup” as a standard in itself). The bench deliberately tried to rattle our mooters and derail them from their submissions with several challenging questions such as:

“I get a sense that you are unfamiliar with your second submission.”

“We get the impression that you [your client] are trying to avoid the determination of the merits of this case.”

Had it been the writer who was mooting, he would have most definitely been left dumbfounded at these questions. But for the Jessup mooters, they held their fort, trudge on with their submissions and answered the questions with great reasoning and solid authorities. The thorough preparation of the mooters was evident from their constant eye-contact with the judges (without any reference to script), the citing of cases and paragraphs of the compromis at the snap of the fingers and the sheer ease and crisp pronunciation of complicated names such as Bosnia-Herzegovina and Major-General Otaz Brewscha.

During the feedback session, the judges sang high praises of the mooters. However, unlike the usual flaccid everyone-is-brilliant-but-there-can-only-be-one-winner comments, the judges gave concrete and incisive suggestions. Here are some excerpts:

“Advocacy is not about winning but about persuading.” Be bold enough to take on a difficult argument and to bring skeptical judges over  to your side. Ultimately, the judges wish to see how the students rise to the challenge.

A moot is always a battle of legalism and realism; the law versus principles.

All in all the moot was an eye-opener and the writer has learnt much from it. The mooters were impressive (and perhaps even inspiring to avid mooters such as the writer) and the judges were enlightening. 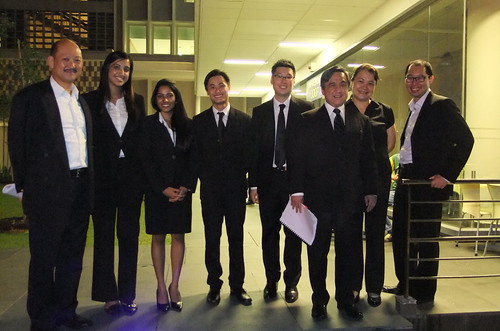