The past week has been an intense one for all the participants of the NUS Advocacy Cup 2012. Proudly organized by the NUS Mooting and Debating Club (MDC) and supported by Drew and Napier LLC, the Preliminary rounds were conducted in school two Saturdays ago and it saw some 80 students turning up in black in white, ready to battle it out in THE annual competition of skill and wit. Eventually, 12 students advanced to the Semi Finals which was held last Tuesday, and the top 4 made it to the Grand Finals which concluded last  Thursday. 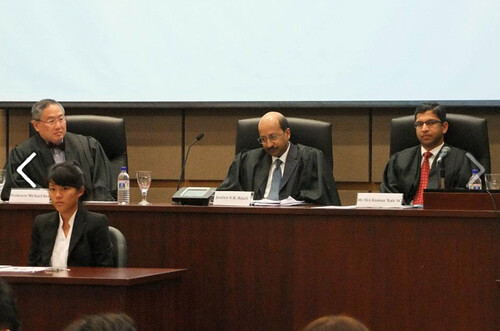 The illustrious panel of judges

An extremely illustrious panel judged the Grand Finals. The panel comprised of (from left) our very own Professor Michael Hor, V K Rajah JA and Mr Hri Kumar Nair SC. This was perhaps one of the many reasons the Moot Court was completely full, with many eager audience members having to stand to watch. 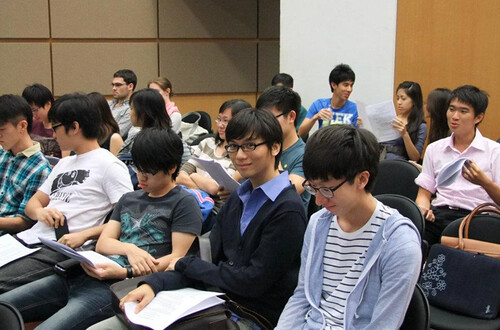 This was the state of the (already extremely crowded) Moot Court 15 minutes before the competition began!

The Moot Problem this year was an extremely interesting one. In short, the problem involved an elderly Indian woman (Mrs Boromani, aka “The Nosy Neighbour”) and a perpetually topless man who wore thick gold chains and whose body was printed with tattoos (Mr Dai Yi Loong, performance artist and painter), among many other things. The latter was being charged under s. 13 of the Miscellaneous Offences Act for harassing and causing distress to the former with his incessant chants which went ‘Om Mani Pay Mani… Boromani Pay Mani…” and for drawing paintings of an Indian lady in various macabre positions of death. In his defence, Mr Dai Yi Loong claimed he was merely chanting the Buddhist mantra “Om Mani Pad Me Hum” as a part of his performance piece and the violent paintings of Indian women — which were also to be used in the performance — were merely meant to be a juxtaposition to the peaceful Buddhist mantra. 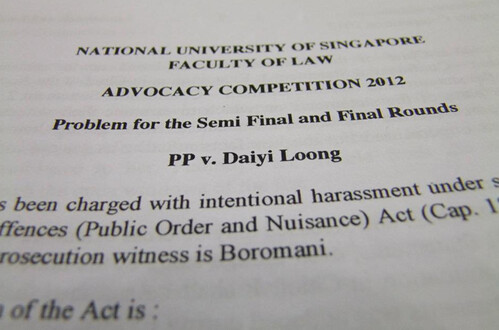 WOW — awesome summary skills or what! I know the story by heart because I was honoured to have been able to act as Mr Dai Yi Loong (Defence witness) for one of the semi-finalists.

Abinaya was extremely smooth and her wonderful British-accent blew everyone away. Jincheng was equally smooth and sharp, and his Cross-Examination was just 15 minutes of RAW POWER. I was at the edge of my seat the whole time. I cringed a little when VK Rajah JA asked Jincheng a pretty tough question on the legislative history of s. 13, but Jincheng just swiftly responded by citing Parliamentary debates and case law. And as he did so, I could sense the (Y) atmosphere in the Moot Court, reaffirmed by the judges’ affirmative nods. It was a truly good show. 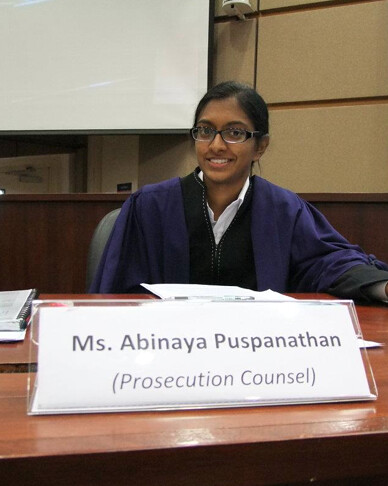 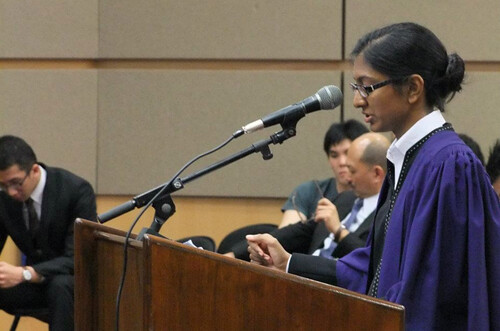 Abi delivering her opening statement with extreme smoothness and confidence 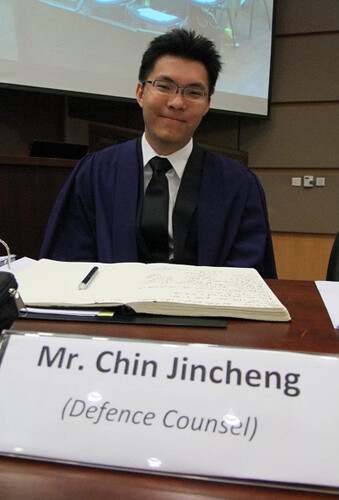 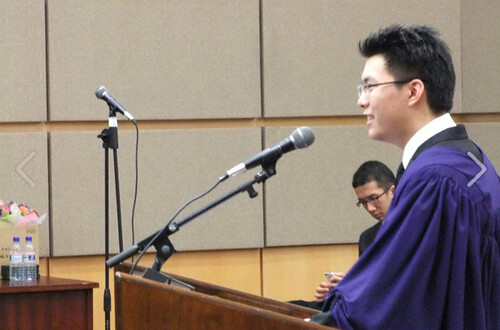 Jincheng and his power-packed submissions

The next 2 finalists, David Koh and Xiao Hongyu, took the stage by storm. They were both on FIRE and it was truly a sight to behold. The Moot Court was filled with much laughter thanks to the wonderfully entertaining improvisation on both David and Hongyu’s parts. They were firm and knew their case theories so well that the questions posed to them by the judges, albeit hard, were absolutely no problem for them. 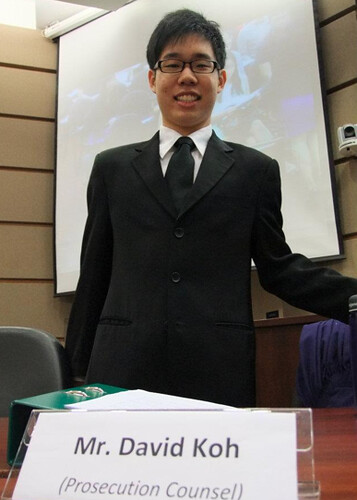 David Koh with his signature 😀 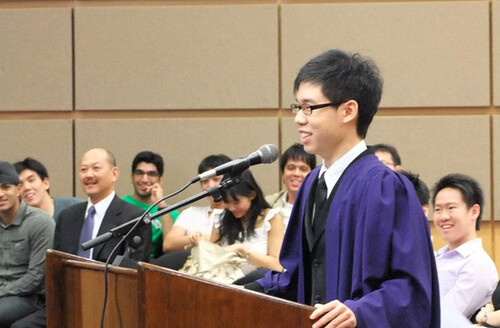 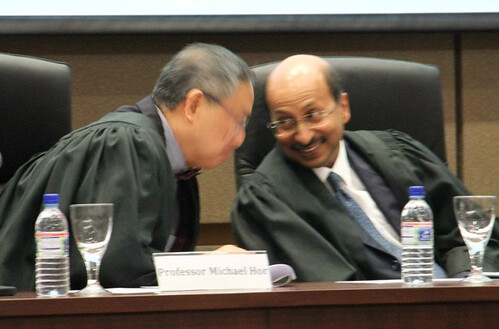 The judges' expressions after listening to one of David's answers 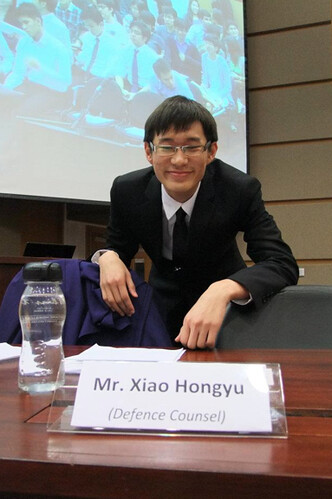 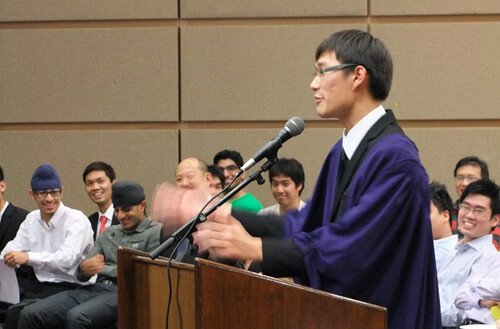 Eventually, in a unanimous decision by the panel (which took only about 5 minutes to reach), David emerged Champion! Hongyu took a commendable second place, and Abi and Jincheng deservingly swept away joint third place. 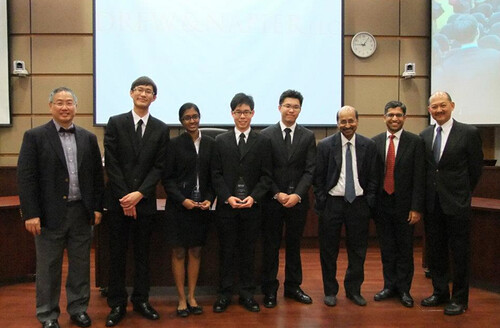 The 4 witnesses were also extremely amazing, with Mak Shinyi (Hongyu’s witness) earning the accolade of Star Witness (mentioned by VK Rajah JA himself). They were all very much in character and there were hilarious exchanges between them and counsel. Having gone through the Trial Advocacy module myself last Semester, I understand how integral one’s witness is to one’s case, so I must say that the 4 finalists’ victories were also their witnesses’ victories! 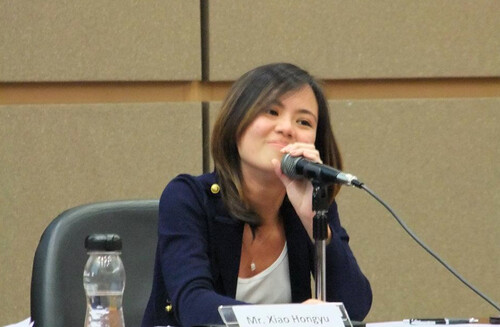 Shinyi the star witness! I believe this was when she was contemplating demonstrating to the court her Om Mani Padme Hum chanting

The night ended with a delectable buffet kindly sponsored by Drew and Napier LLC and all the finalists and audience members tucked in. Somehow, we did not manage to get a picture of Isaac at the buffet table. 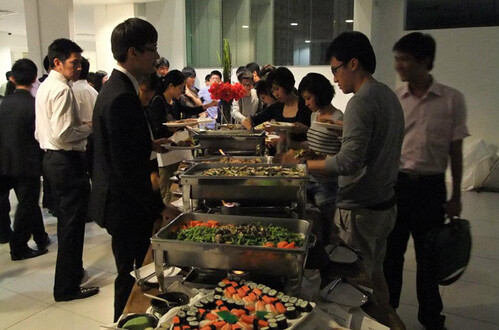 It was a wonderful night and truly one of the most exciting advocacy competitions I have ever had the honour of watching in Law School. Once again, congratulations to all the participants, semi-finalists and finalists! 
Jessup Moot Practice Round (with Drew and Napier LLC)