In an afternoon that threatened to rain, the persistently dark clouds in fact provided the perfect weather to relax in a good session of netball (especially serving as a much-needed form of recovery for the year ones after a traumatizing SLS paper).

For our first match, we were lined up against the girls from SMU who had arrived with a considerably large army. While our team had just enough players to field on court, that turned out to be all that was needed. In a game that ended in a score of 16-0, the scales were tipped in just the right direction. Being able to achieve the remarkable feat of maintaining a clean sheet should be credited to the efforts of our hardworking defenders. With Monique and Grace holding our fort in defence, the netball poles at our sides were starved of any goals throughout the game. Nevertheless, their efforts in keeping SMU at bay was well-rewarded as the midfield engine comprising of Hai Yiu, Annette, Kawthar and Natalie worked hard to bring the ball down into our own half. At our own end, our shooters Natasha and defender-turned-attacker Charlene not only performed the perfect finish by duly putting in the shots, but also treated the teams and the spectators to an attractive show of no-look passes and intelligent play that rendered the SMU defenders helpless. Nevertheless, SMU’s dogged attitude never once allowed them to give up and they put up a commendable fight that made playing the game all the more enjoyable for both sides.

Soon after this victory, team NUS was up for a final face off against the Law Soc.

Unfortunately, the Law Soc was ready to meet us with a refreshed vigour that capitalized on our fatigue from playing the first match.  Countering the Law Soc’s steady play was no easy task, and on our part we had committed a couple of unforced errors.  Having lost valuable possession of the ball on a few occasions, we were down 7-3 by half-time. Nonetheless, we returned back on court ever-more determined to fight back, for the prospect of defeat arising from a failure to play well did not rest well with us. With Grace’s tight marking of her opponent and Monique’s gravity-defying interceptions, we were able to sneak in steals of the opponent’s possession. Centre Hai Yiu tirelessly proved as a valuable link from one end of the court to the other while Wing Defence Annette and Wing Attack Natalie provided support down the flanks as the game progressed. Playing a pivotal role in accounting for our team’s goals, Goal Shooter Natasha skillfully saved and shot in balls that appeared destined to fly out of court (not to mention being ever-ready to take photographs!) But all this was not possible without Goal Attack Charlene who spearheaded our attack down the court and displayed much chemistry in working with Natasha as she fed her countless lobs that eluded the defender’s hands. This determination paid off as the team gelled together to stage a well-deserved comeback of winning the second half 5-4, although it was insufficient for us to pull off a consecutive victory. But it did not matter, for an afternoon well-spent on playing the sport with awesome teammates was simply enough. 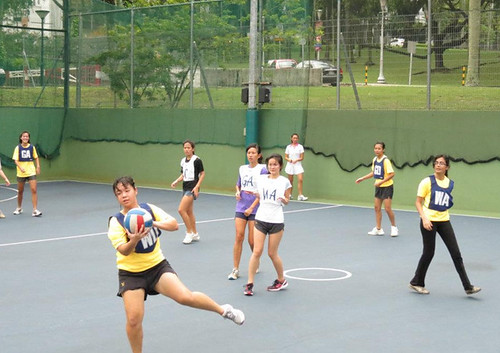 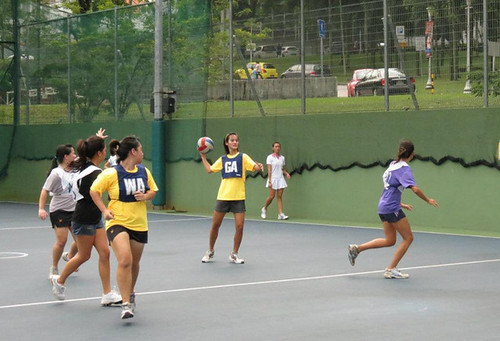 Charlene getting ready for the throw! 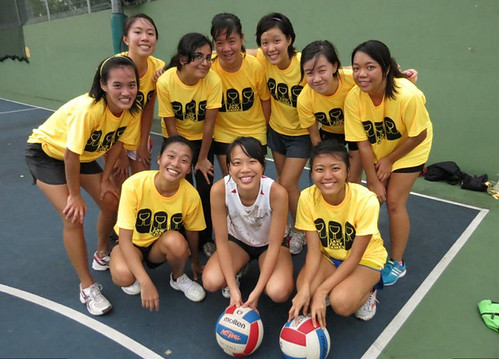