It’s not common to see Eugene Ong (Year 2) awake so early on a Saturday morning, but awake he certainly was. It was a hot day, and the bright yellow sunshine was only matched by the bright yellow tops that our boys wore for the Law Frat Games.

The three-team tournament kicked off with a game between SMU Law and Law Society, where both teams played out an entertaining 2-2 draw.

Next up, it was Law Society vs NUS Law, a match that we certainly took very seriously, because we felt they were the stronger of our two opponents. With that in mind, Eugene selected Timon Chiong (Year 2) as the goalkeeper (despite him being a very reluctant keeper), and he went on to produce heroics between the sticks, with the highlight of his first half undoubtedly a fantastic penalty save by him, preventing Law Society from taking the lead.

Despite the team struggling to find any rhythm, the crowd was about to witness something special. Something very special. There seemed to be nothing much on when a lofted through pass was played behind the Law Society backline, but as the goalkeeper came charging out, Damian Ng (Year 2) nipped in, produced a deft flick that looped over the goalkeeper, and that was 1-0 to the boys in yellow!

In the second half, we created numerous other chances, but some profligate finishing meant we could not add to our tally.

Comic relief was provided by CK “Pika” Chiu (Year 3), who was caught offside more times than Pikachu is caught in a Pokeball. Each time, his reaction was very animated, somewhat like his doppelganger/namesake, who is wholly animated.

Just when it seemed that we would take a crucial win in our first game, perhaps it was not meant to be. A hopeful long ball by one of the Lawsoc players was not cleared by Ker Yanguang (Year 3), who attempted a Chun Li-like mid-air kick, but unlike Chun Li, Yabbie, as he is more affectionately known, did not manage to kick any balls. This left the Law Soc striker one-on-one with the shortest goalkeeper NUS Law has ever seen, Hirono Eddy (Year 3, yes, myself), who was unable to pull off a Timon, allowing Law Society to snatch an equaliser right at the end. 1-1 was the final score, and with the first game finishing 2-2, only a win would do, in our final game against SMU.

And win, we certainly did.

In the pouring rain that greeted the second game, it wasn’t just the clouds doing all the raining. Our players rained in shots from all angles, and with all the raining, something had to give. The floodgates were duly open (not literally) with a goal that proved old is indeed gold. Joshua Khng (Year 4) burst through on goal, tested the keeper with a shot, but after it was saved, Wen Juin (another Year 4) kept his nerve and slotted the ball into the back of the net. 1-0 to NUS Law, and we never looked back.

The 2nd goal came from Law School’s favourite Pokemon (Pika Pika!), who curled in a tantalising freekick which totally bamboozled the opposition goalkeeper.  In trying to deal with the freekick, the SMU goalkeeper quite inexplicably, tried to use his feet to save it. Automatism? Anyway, quite literally, he could not handle the shot.

Before too long, the 3rd goal arrived, this time via a good finish from Nicholas Yeo (Year 2), after some sterling work from Timon, this time playing as right-winger. The goal came as a huge relief to Nicholas, who had earlier missed a glorious opening in the earlier game.

The 4th goal was also down to good work from Timon, who displayed the dexterity of a meerkat to find himself some space in the penalty box, before slotting it into the bottom corner of the net.

Having built up a solid 4-goal lead, the heavens decided enough was enough, and the first signs of lightning were spotted in the distance. This led the referee to call off the game, but it didn’t matter to us, for the result meant that we were Champions, for the 2nd year in a row!

Congrats to all the boys who came down and played! 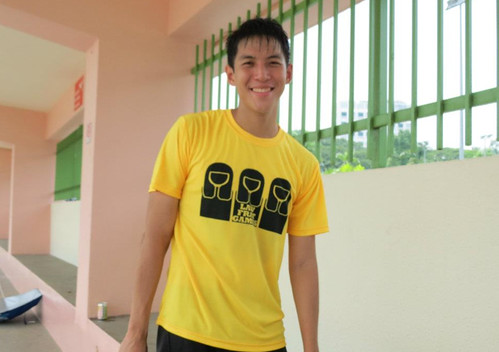