Fun fact of the day: Floorball in Chinese is “ç¦ä¹çƒ”, which directly translates to prosperous and happy ball. It is no wonder that there was nothing but smiles on our faces as we played our hearts out, enjoying every single second we spent playing the sport on this beautiful Friday evening!

Goddess of floorball Cassandra Goh (Year 2) wowed the crowd with not only her jawdroppingly imba floorball skillz but also with her stunning good looks that left all the SMU law girls trembling in a mix of jealousy and awe. Not only is mighty Cass reigning champion of table tennis at the student lounge, she was most obviously the woman of the day as she slammed goal after goal past the hapless SMU defenders with utmost ease, scattering their formation as they scrambled madly for the ball. There is no doubt that she won the heart of every heterosexual male present within a 5-foot radius of the court. Said anonymous person who prefers to remain unknown, “Watching her play… its like you’re in heaven!” 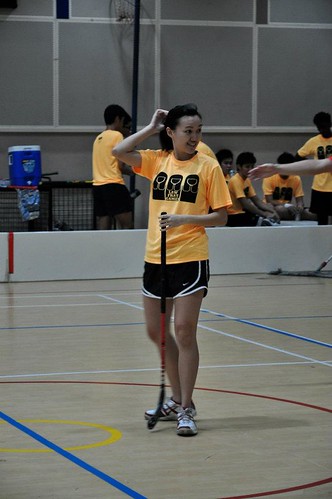 Of course, goals were also scored by Wong Bei Shan (Year 1), who was assisted in her attack by Lai Su Lyn (Year 1). Swift and giving SMU a run for their money, the two forwards dribbled past the SMU Defenders and tapped the ball lightly into the 10% open space that was not blocked by some petite butt due to the almost pathetic size of the goalpost. Su Lyn was especially outstanding in the match against Law Society as she forged her way through their tight defence, creating opportunities for herself and her fellow teammates to try to score, at the same time putting all Formula 1 racing cars to shame with her lightning speed. 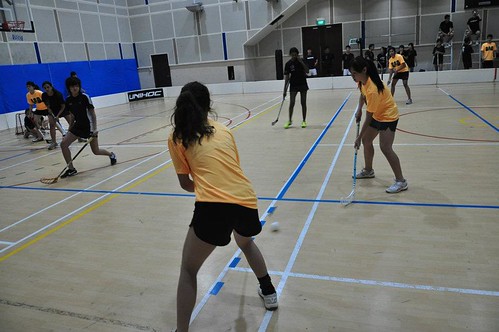 Credit must go out to the most amazing defenders ever – Delise Yang (Year 1), Priyanka Chandrasekar (Year 2), Charissa Lu (Year 4) and Captain Soo Bei Han (Year 2). Don’t be deceived by Bei Han’s petite frame and cute (until you want to put her in your pocket) looks! A comedy act off court but a ferocious and very formidable defender on court, very few balls can get past her swift stick and few can not heed her bellowing war cry. Bei Han broke out of her zone on numerous occasions in both games and attempted to score — such was her confidence and her beyond mortal skillz that she successfully pulled off several one man runs all by herself. Calling out to all scientists! We need to clone more Beihans for where else can you get brawn, beauty AND brains? â™¥ 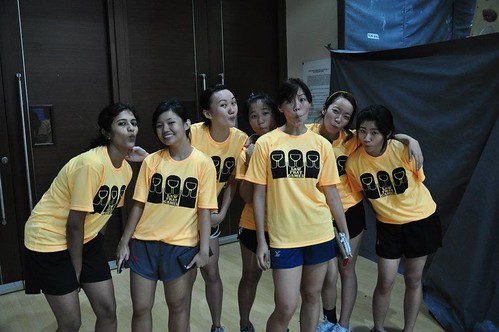 Charissa fooled all our frienemies with her sweet and delicate appearance, but proved herself to be the exact opposite of what she seemed to be. She was merciless and pressured them to the very end, darting in and out to defend like 3 “men” at one go.

Our brilliant last man Priya also cleared ball after ball over to the opponent’s side of the court, enabling the forwards to make a speedy attack and at the same time relieving the defence of pressure. Few can match up to Priya in terms of her ability to defend and her god-like reflexes!

In the match against Law Society, Delise displayed nothing but acumen, fine skill and speed as she taunted all who marked her with perfect control and dribbling and stole possession from every single person she marked. She also brought life and soul to the team, cheering us all on endlessly. Her enthusiasm was indeed as contagious as the Table Tennis, Tetris Battle and Sims Social Addiction. 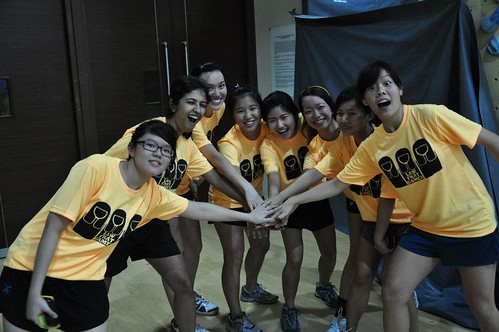 Thanks go out to all my lovely teammates for this wonderful time together since IFG season, for bringing cheer into my life, and for the excellent games today! See you guys for Law-Med (or at the table tennis table)!


The 6 (Annoying) People You Meet in the Study Room