A goal reminiscent of Geoff Hurst’s controversial 3rd goal for England in the 1966 World Cup went a huge way in settling a closely fought game between a combined NUS/SMU Law Team and a team from the Law Society.

On the field at the CCAB Stadium (which after the crazy downpour resembled more of a swamp then a field), the combined team faced a veteran team stocked full with experienced players. Nevertheless, our ladies more than matched the LawSoc team with their tenacity and effort.

With passing almost impossible due to the waterlogged pitch, high balls and physical play was the story of the first half. Despite an even half, the LawSoc team scored after the Combined team failed to play to the whistle and allowed their striker to tap home from close range.

After the half-time break, the LawSoc team came out energized after their half-time talk by their very animated coach. 5 minutes into the second half, LawSoc scored another goal after a strong run past the Combined team’s defence and slotted it past Jolyn in goal.

However, that goal only seemed to galvanise our ladies, and they started a period of heavy dominance in the LawSoc half. After some half chances (created by poor defending from the LawSoc team), a speculative curling shot from outside the box somehow crept below the entire defence and past the sprawling keeper into the goal.

With 15 minutes left, our ladies pushed forward for the equalizer, and they got it after a superb run and finish our dazzling Dane Lina, loaned all the way from Copenhagen (I think).

With referee Eddy (yes he does everything doesn’t he) blowing for full time, only the lottery of the penalty shoot-out remained to separate the two teams. With our ladies converting both their first two penalties and the LawSoc team missing both, it seemed that we had the edge.

However, the moment of controversy came in our ladies’ third penalty. Wanyi’s penalty struck the bottom of the crossbar and landed down on the ground before bouncing away from the goal. As the LawSoc team celebrated, a little New Zealander boy and his father (I assume, since they were throwing a rugby ball around near the posts, and yes, stereotypes stick) started saying that they saw the ball cross the line! This led to the goal being awarded and the LawSoc coach storming towards Eddy to complain that he shouldn’t listen to the little boy and his father! Clearly, tempers were fraying!

In the decisive penalty, the LawSoc team blazed over, which led to our ladies winning 4-2 on penalties. Cue polite handshakes all around (except from the clearly infuriated coach who started lecturing poor Eddy on how to referee a game!)

Congrats to our ladies for winning the game! It really did have everything you would expect in top-flight football (well, at least apart from the swamp of a field). 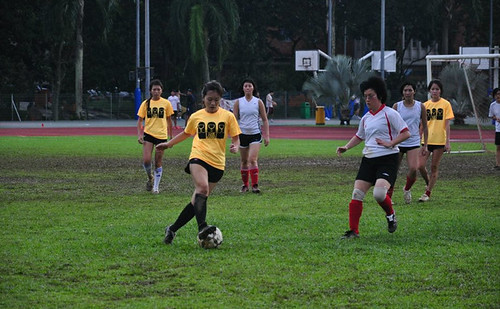 Keeping possession of the ball... 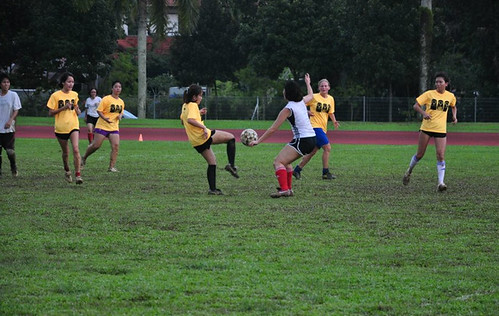 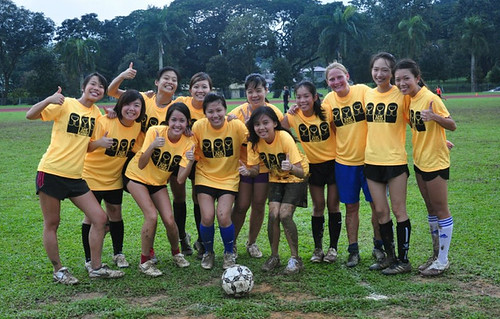