Team Law entered IFG this year with high hopes – to qualify for the semi-finals. Ever since the dominating performance Law put up in 2012, cruising into the semi finals led by NUS’s very own All-Star Danny Chua, Law has entered a mini-slump. This year, our hopes were rekindled by the addition of another All-Star, University of Copenhagen exchange student Benjamin ‘Bicep Jin Dua’ Thidemann. While critics might seek to downplay our success due to this massive hulk of a foreign talent, we made sure Ben learnt how to cuss in Hokkien and Cantonese before he took to the court and was effectively naturalised.

However, we were faced with a massively-stacked group stage which comprised both Team All-Star Business (almost all of them are from the NUS basketball team) and Team Yale-NUS led by the famous Subhas Nair. The odds were against us from the beginning. Rounding up our group were Team USP, to whom we had lost in a disappointing fashion last year, and Team Arts, whom we beat last year only by an extremely slim margin and a sizeable dose of luck thanks to Lai ‘banklegend_92’ Jian Qin’s three point bank shot. Only the top two teams would advance to the next stage. Alarmingly, none of the teams seemed to be easy competition and we were, admittedly, afraid that we would emerge from the competition without a single win.

On a skin-cancer sunny kind of day, our first game was against Arts – and it was a must-win game for qualification. The game started off well, and we held our own against Arts with some intense play from both sides, coupled with good defensive rebounds by Cheng Aik and Benjamin. At the half, both teams were tied at 10 points apiece. It looked certain to be an extremely tight game. Everything fell apart, however, when the second half began. Arts used the halftime break to their advantage, coming out fresh-footed and playing cohesively. Law, on the other hand, came out from the break wheezing and puffing, losing the ball on multiple possessions and having numerous defensive lapses. Our star defender Darrell Lee, assigned to guard the best player on the Arts team, also fouled out. This allowed Arts to push their advantage, taking a 15-11 lead. Since the break, Law had only scored a single point on a free throw coolly converted by vice-captain Wayne Chan (out of 4 attempts). 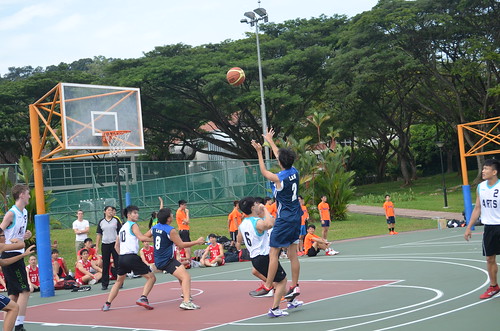 Jerrold with the shot attempt

Enter Benjamin – he did not hesitate to bring the pain. With little time remaining on the clock, Benjamin took an open 3-pointer, set up by an effective screen from team captain Jerrold Au. This cut Arts’ lead to 1. Benjamin, unfazed, did this again. And again. He singlehandedly scored three 3-pointers in a row, the last of which he shot with a hand in his face. It was an unstoppable 3 point barrage. 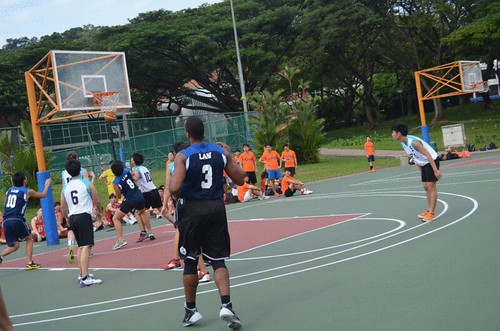 This sudden turn of the tide opened up the lead for Law, and the game was sealed when Arts missed several crucial free-throws which could have allowed them to tie. Benjamin’s heroics clinched the thriller for Law in an epic final few minutes, and Law eventually won the game 23-19. Yes, foreign talent won Singapore yet another sporting event.

Having taken the first game against Arts by the slimmest of margins, our spirits were soaring, flying; there was not a star in heaven we could not have reached for. We went into the game against USP, intending to take the game by its horns. However, in an unfortunate turn of events, USP took us by the balls. Despite star freshie Lim You Xiang converting an early 3-pointer for Law, USP scored 10 consecutive points. The score at the end of the half was 3-10 to USP. It must be said here that last year, USP had also taken an early lead against us and never looked back, winning the game emphatically. This year, we were determined to make sure that outcome did not repeat itself. 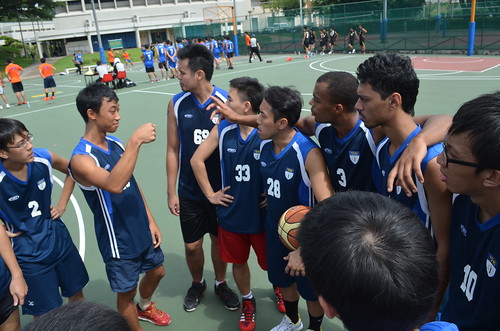 The fist-bump which never happened

With that in mind we set out to communicate better on defence and take better shots. USP’s key player (actually he was the only person scoring for USP, mainly because he never passed the ball) began to tire out due to Darrell and Wayne’s merciless defence, taking worse shots and failing to convert on multiple free throws. This was Law’s chance. With Law still trailing, the turning point came when the man of the match, You Xiang, started to heat up, hitting a long range shot to trim the lead. He scored again on the next possession, but this time from behind the arc. 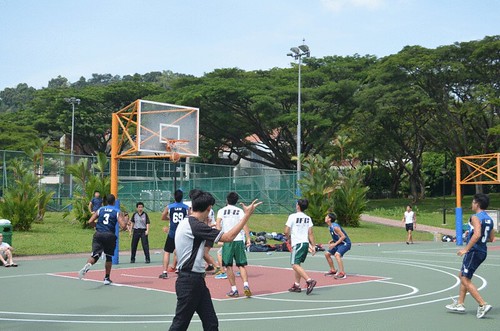 You Xiang scoring his second 3-pointer of the game

With USP’s lead cut to just 3, Teren ‘Ball Don’t Lie’ Perera stood open at the 3 point line, contemplated for one second, and let loose a shot that hit the board, but went right into the hoop. He then proceeded to celebrate his shot all the way down court . 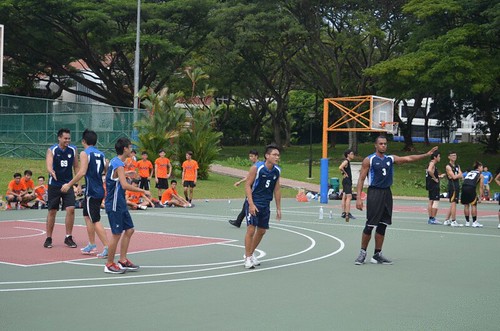 Teren looking extremely pleased with himself).

With that, the game was all tied up at 11-11. USP attempted to answer with an isolation play for their best player, who came out of the possession empty-handed. Law’s response was another bank shot – this time by team captain Jerrold Au, who took the shot from the top of the key and scored. With a mere 2-point lead, Jerrold followed this up during the next possession with his trademark pump-fake dribble pull-up jump shot from the high post, which went swish into the net. From then on, we never looked back and eventually secured a hard fought 17-13 victory. 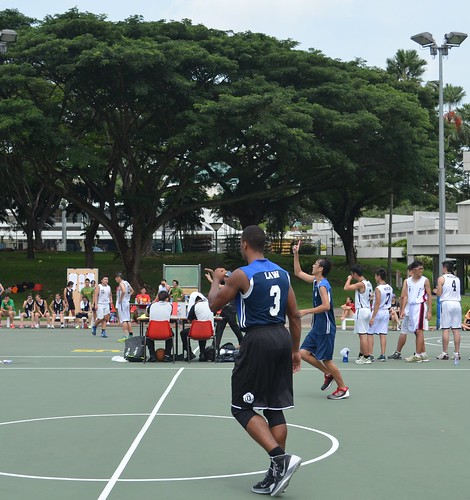 Jerrold celebrating after his shot)

Galvanized by our victories in the first two games, Team Law went into the third game of the day raring to go. We knew that this game would be the crucial one: beat Business, and we would be bound for the semi-finals in a truly fairytale season. However, as earlier alluded to, the Business juggernauts looked unstoppable with a roster stacked full of players from the IVP team. Nonetheless, we were determined to at least show the businessmen that we could give them a run for their money.

With a spot in the semi-finals on the line, both teams were determined to bring their A-game and this was immediately evinced from the inspired defence and intense change-of-possessions that kept the game scoreless for the first few minutes. Despite the Business team’s veritable salvo of offensive options, it was Law who put the first points on the board when You Xiang found a crack in the enemy’s defence and drove all the way to the basket for a lay-up. Not to be outdone, Business immediately responded with a basket of their own. This neck and neck fight continued till half-time as we managed to keep pace with the star-studded Business team off the back of a further basket from You Xiang and two beautifully taken shots from Year 1 dynamo Jia De who shrugged off a recent ankle injury to give a commanding shooting performance. At half-time, the scoreline stood at a respectable 10-14 in favour of Business. Though we were trailing by 4 points, our captain Jerrold and the ever-inspirational Benjamin gave us a rousing speech, highlighting that we had clawed back from a 7 point deficit to victory in the previous game. As long as we maintained our composure, there was no reason why we could not do likewise here. 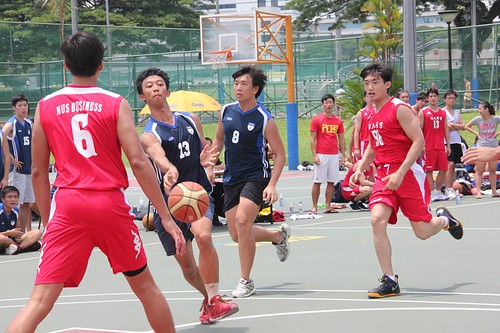 Darrell and Cheng Aik in action

Unfortunately, things played out rather differently than we hoped. On starting the second half, Business immediately switched to their famed full-court press defence and forced a couple of turnovers that transited into easy baskets and widened the lead substantially. The lineup rotations of Andrew, Kenneth, Anshul and Jian Qin were unfortunately unable to stop the evergreen Business team, which constantly rotated their whole lineup in an impressive showcase of depth. Team Law was on its last legs and we looked to our veteran Y2 players to stem the blood loss. Once again, team captain Jerrold was on point as he rose to the occasion and put the ball through the hoop on a heavily contested shot, with Elias “Mediacorp Superstar” Tiong bagging 2 further baskets for the team in an impressive fashion. However, this proved to be insufficient as Business was simply the superior team – their indefatigable defence and sterling individual skills proved too much for us to handle. Team Law eventually bowed out of the game with the final score at 14-26, a commendable feat in light of the fact that the Business team would go on to be the eventual champions of the tournament.

The final game of the afternoon was against Yale-NUS, the eventual runners-up of the tournament. The team was undefeated in the group on that day, even scoring a win over Business (the business team seemed jinxed in that game, failing to connect on easy shots through the entire 20 minutes). We managed to keep the match close throughout, but our top performer You Xiang suffered a mild cramp in the second half and had to sit out for a few minutes. In those few minutes, Yale-NUS played good defence, forcing a number of turnovers and pulling ahead. Despite a late 3-pointer by Elias and a crucial free throw made by Benjamin, time ran out and the score was 10-14 to Yale-NUS at full time.

Although the law team did not qualify for the semi-finals, our turn-around victories over Arts and USP are testament to the team’s fighting spirit and tenacity under pressure! The team would like to specially thank our team managers Alex and Danny, as well as the Law girls’ basketball team for cheering us on. Special mention to Tony Liu and Kevin Chua for coming down to support us despite unfortunately getting injured during trainings. We will strive to improve even further, to hopefully attain a LawMed/MedLaw 3-peat next semester! 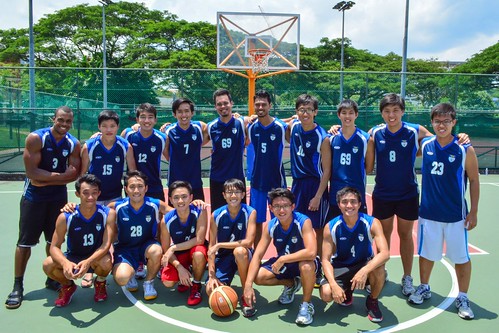 
[Dialawgues]: A Guardian, A Servant of the People