Floorball involves a bunch of men waving sticks aggressively, and on 23rd August, the men’s Floorball team did just that as they headed down to the stuffy confines of MPSH 6. The hectic schedule of a typical law student meant that the team list had been confirmed only the day before, but the boys were full of vigour and ready to play their hearts out.

At this stage last year, we had narrowly beaten USP 1-0. However, this was a new USP team, energised by new players as well as the presence of law school’s very own Gary Tse, known for his fearsome stamina and charismatic smile.

Early in the game, the Law team was caught off guard by a sublime flick from the half way line by one of USP’s players. With Gary as their inspirational captain, the USP team was tactically and physically disciplined. We fought valiantly to get back into the game, but a swift counter attack by USP resulted in yet another goal, consigning us to a defeat. USP had prevailed at the expense of Gary’s home faculty. 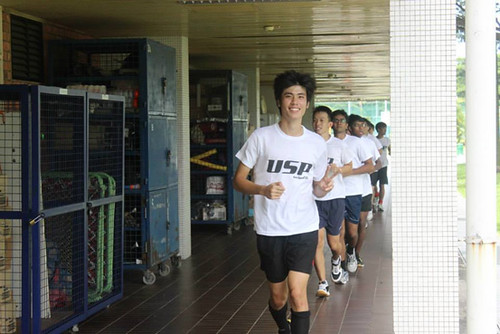 Ladies, you’re gonna have to get in line 😉

When interviewed later, Gary had this to say: “I’ll play Law Frat/LawMed to make up for this.” Wise words…

Matches against our old rivals are always hotly contested affairs — last year’s Med-Law Games concluded only after multiple periods of extra time. This time was no different, with both teams placing their bodies on the line in order to secure a win.

Some smooth play from the Medicine team ensured that they drew first blood. The Law team was undeterred, and efforts from Joel (Part A) as well as Jimmy Chuk (Y3) came agonizingly close to equalising for the Law team.

Medicine had their chances as well — the referee (Shannon “The Cannon” Yeo, also from the Law faculty) awarded a penalty when one of our players was judged to have handled the ball in the penalty box. Veteran Medicine player Joel Soon stepped up to take the penalty, but fortunately hit the post, thereby keeping our hopes alive.

The Law team’s do-it all man Julian Foo (who also plays tennis, soccer, and a host of other sports) demonstrated indomitable spirit to equalise in the dying moments of the game, pouncing on a Medicine defensive error. This secured a justly deserved draw for the Law team, who now have to wait until this year’s Law-Med Games to prove that they are the better team.

Having only taken a point from the past two games, the Law team knew that anything less than a win would render our future efforts irrelevant. Motivated by such high stakes, we went in with guns blazing.

Jimmy (Y3) the midfield maestro quickly quashed any hopes of a shock Computing win, angling a shot into the corner of the goalpost to gain the lead. We managed to register several more attempts on goal, with the agility of Hijazi (Y3) proving to be a thorn in the Computing team’s side. Our efforts were eventually rewarded with a goal by Hijazi. The rapturous applause from the sidelines evinced the near fanatic support that the previous year’s captain commanded.

Some confusion predated this match as Dentistry appeared unaware that they had a match schedule. For a while, it looked like they only had five players present. Nevertheless, the Dentistry team finally appeared and the match managed to get underway.

Knowing that the final results might depends on goal difference, we feverishly tried to score as many goals as we could in the nine minutes afforded to us. Zaki (Y1) gave us the early lead with some astute finishing, smashing the ball into the goal with youthful energy. We continued to pepper the Dentistry goal with shots, but to no avail.

Towards the end of the match, an unidentified player from the Law team managed to get one-on-one with the goal. Instead of tamely guiding the ball into the goal, he flicked the ball into the roof of the net, perhaps demonstrating a predilection for showboating. Nevertheless, this secured the win, and the game ended thereafter, a satisfying result spurring us on towards the final game of the day.

The Business team, the strongest team not to be seeded in this year’s IFG, had won all their previous games. The Law team, in a businesslike manner, went about trying to disrupt this record.

The game got off to a disappointing start, as a penalty was (somewhat confusingly) awarded against Zaki (Y1). Having never fully experienced the exhausting nature of law school, the young defender had perhaps too much strength and energy, as he cleared the ball into the ceiling. Business took a well-choreographed free hit, and promptly took the lead.

As the game progressed, both teams managed to create several chances, but the timely intervention of defenders from each side ensured that the score remained the same. However, some deft dribbling and a quick break from Wesley Chan resulted in a dramatic equaliser. Wesley, who also plays in a band called These Boys Named Sue, showed that he is not only musically talented but physically gifted as well, with his tireless running and intelligent movement on the court.

Despite a decent set of results, we had to rely on the results of other fixtures in order to progress. A draw between Medicine and USP would mean that we had pulled off the great escape — coming from behind as underdogs to progress to the next stage. Unfortunately, our old rivals beat USP 3-0 in a sensational win.

The mercurial performances of Business and Medicine meant that we failed to progress to the semi-finals. Nevertheless, as captain Ervin Roe (Y2) said, “almost made it sia” the best team lost. 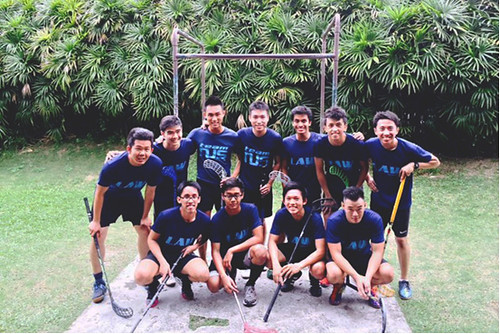 You’re all winners in our hearts boys xoxo