To the uninitiated, Reversi appears to be a confusing game in which players alternate placing and flipping discs. Delve into the mysteries of the game, however, and it readily becomes apparent that Reversi is really a microcosm of war in which players jostle for tempo, position and liberty on the 8×8 board. Reversi is tense and unpredictable: Devious strategies are devised on the fly by both players, the discs’ allegiances are in constant flux and the winner is often unclear until the very last disc is played.

Team Law generally has a poor showing at IFG Reversi (perhaps because law students are taught to think in multiple shades of grey rather than in black and white?). This year, however, after a gruelling week of selection trials and training (yes, trials were conducted and the team actually trained quite hard for it), Law assembled a formidable team consisting of team captain Erwin Wan (Y3), returning maestro Derrick Koh (Y3), surprise package Chow Zhi Ying (Y2) and freshies Janelle Ng (Y1) & Daniel Tay (Y1). Can this team reverse (no pun intended) Law’s fortunes? 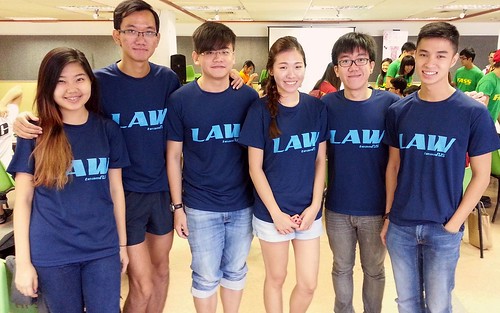 On IFG day, Team Law arrived at the venue clad in our beautifully designed (and free-of-charge) Law IFG shirts. Occupying the far end of the hall, it was easy to feel like underdogs compared to powerhouses like Yale-NUS, USP, Arts and Engineering. Shortly after the organising team briefed all players on the technical rules and the scoring system, the games begun.

Team Law’s first game against favoured Arts began disastrously as first board Daniel Tay conceded an early corner and was busted out of the game 0-64 (the first, and only, complete wipeout conceded by law in the entire tournament) by the incredibly strong opposition. Miraculously, however, the rest of the team managed to find the right answers to their opponents’ threats and won their respective games to give Team Law a surprise victory over Arts (Arts was placed within the top 3 in 2013 for IFG Reversi). Each round saw 4 players against their opponents; for a faculty to win that round, at least 3 players must win that round, it would be counted as a draw if the faculty won two and lost two games for that round.  A point was given to the winning faculty and half a point to both faculties who drew against each other. 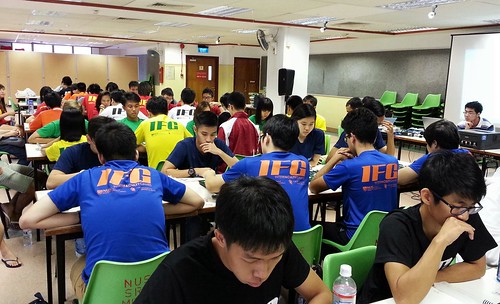 INTENSE. The IFG 2014 Table Tennis Law Team Manager Chua Yongquan (Y3) (not pictured) came to spectate and support the Reversi Team and commented that he had never seen such an extreme level of intensity at an IFG game before.

Buoyed by the win over Arts, Team Law did well in the subsequent games. By lunchtime, Team Law had obtained an impressive tournament stats of P4 W2 D1 L1 with 1 game in hand, winning against Arts and SDE but losing to technically-sound Science and drawing with trash-talking Computing.  At 4th place in the standings with crucial games against title contenders Engineering, Yale-NUS and USP to come, as well as the traditional grudge matches against Dentistry and Medicine to look forward to, the 2014 Team had vastly outperformed the 2013 Team, and had a more than even chance of clinching an IFG Reversi medal! Team Law broke off for lunch on note of stunned incredulity and hopeful anticipation for the afternoon matches.

Perhaps it was the food coma from the awesome/delicious/appetizing/cheaper/healthier non-summit food at YIH, or perhaps our opponents were simply too strong, after lunch, any hopes of an IFG medal were quickly quenched with brutal losses to Engineering and Yale-NUS. Even so, Team Law was eager to fight on, and clinched a hard-fought victory against Business and a draw against USP to rack up a score of 4 out of a possible 8 with two games remaining.

At that point, Law had to win the remaining games against Dentistry and Medicine in order to stand an outside chance of winning an IFG medal. Medicine and Dentistry were both in the bottom half of the standings and were mathematically out of the running, but the historic rivalries between the three teams must not be underestimated.

In a nail-biting match (that of course involved our star player Daniel Tay) that ended with barely 0.03s left on the clock, Dentistry prevailed over Team Law and left the match with wide toothy grins. And now it was time for the final showdown: Law vs Medicine. By this point, both teams were mathematically out of the running for the IFG medals and all players were tired after a long day of competition, but law was determined to win at all costs.

War has been declared: the best legal minds of law school devoted themselves to the task of making the pain receptors on the doctors’ brains cry. A crowd began to form around the table; the spectators did not care about the ongoing matches between USP, Yale-NUS, Arts and Engineering which would decide the destination of the IFG medals, but rather the battle-to-the-death that was Lawmed Games (preview edition). Chow Zhi Ying was the first to prevail over his opponent, followed closely by IFG Reversi veteran Derrick Koh (It must be noted that with this win, maestro Derrick Koh had won 7 out of the 9 games that he played during the entire tournament, a remarkable feat that deserves immense admiration and respect).With two out of four matches concluded, the fate of Lawmed Games (preview edition) fell on the remaining players, Daniel and Erwin. Unfortunately, it was not to be: the latter two were unable to overcome their opponents, and so Medicine was able to eke out a draw. 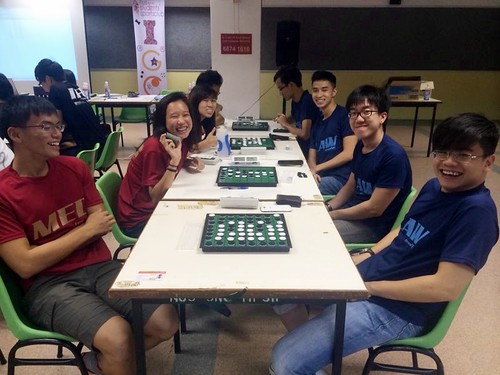 A LawMed 2015 Preview? Reversi as an event to avoid a potential situation whereby both Law and Med come in tied for first place in a tournament with only two faculties? Oh, oops, that actually happened last year. 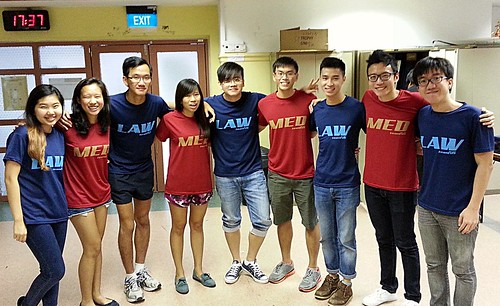 Overall, with 4.5/10 points, Team Law concluded Reversi IFG tied in 5th place with Dentistry and Computing, beating Medicine (8th place)  but losing to Engineering (1st), Yale-NUS (2nd), USP (3rd) and FASS (4th).  In so doing, Team Law has successfully shed its “underdog” title and proven itself capable of holding its own against formidable opposition. May Team Law build upon this solid foundation and soar to greater heights in IFG 2015!

Justified understands that the team has already started training for IFG 2015 and that there are plans to start a Reversi Club in law school. Interested students can approach the 2014 Team Manager Allison Tan (Y3) or Captain Erwin Wan (Y3) any member of the team to join.