There isn’t a crowd gathering to watch when an event is at 0730 on a Sunday morning. But the driven runners for IFG Road Relay 2014 couldn’t care less.

Trudging towards the Stephen Riady foyer still half-asleep, I was greeted by the sight of individuals warming up for the race ahead. The air was abuzz with energy and anticipation as teams gathered in clusters to discuss strategies and prepare for the run. 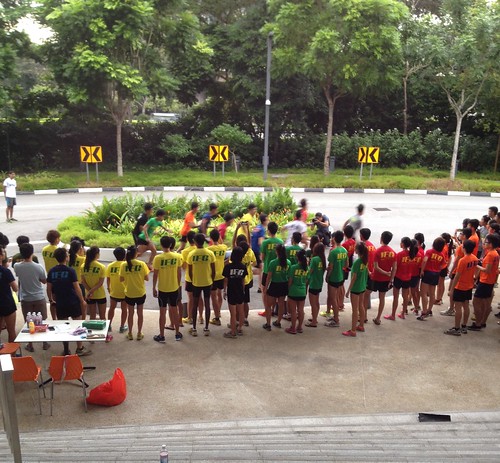 This year, our team was mostly made up of  year 1s and 2s (and an ex-US army officer?!), with Jianyang, Nicole, Charlene, Theodore, Elizabeth and Michael representing Law in the race. The road relay consists of a 1.8km route that is covered 6 times by 3 guys and 3 girls. As with all relays, the team with the fastest timing overall wins. 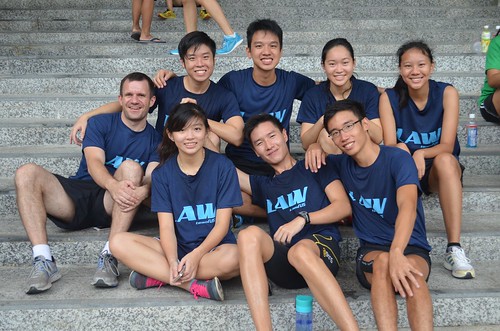 Having heard from Elizabeth Chan (Y1) that the competition was strong this year, we shared her excitement as the race flagged-off, with Jian Yang running the first leg. We were off to a decent start and placed 5th, behind Engineering, Business, Arts and Medicine. 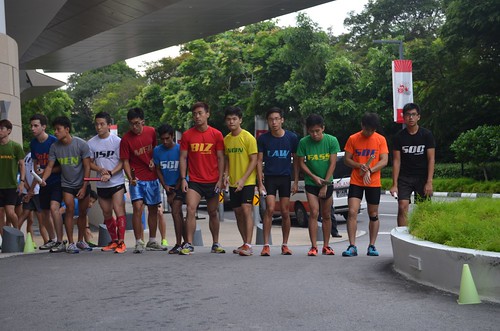 As the baton was passed, the rest our runners tenaciously pressed on in an attempt to improve our placing by overtaking other faculties. Our female runners–Nicole, Charlene and Elizabeth–undoubtedly held their own alongside guy competitors from other faculties as they ran 2nd, 3rd and 5th respectively. Team Manager Jiashun had previously mentioned that the lead would keep changing up to the last two runners. True enough, the order of faculties shifted with each lap due to the guy-girl variation, keeping everyone on the edge. Engineering, who initially took the lead, fell back to 4th place as Medicine and Science closed the gap by overtaking, climbing their way ahead.

Although the runners were mostly out of view past the foyer, Jian Yang mentioned that the route was tougher than expected. Rounding the bend, runners had to conquer a gradual uphill covering most of the distance, before reaching a steep downhill towards the end of the leg. The uphill run was especially tiring for Jian Yang, who nonetheless finished with an impressive timing. 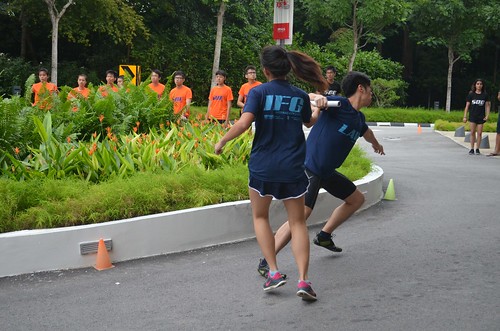 No time to waste as Charlene passes the baton on to Theodore, who takes off!

The rest of the team did not join me in standing by idly, as they provided support by accompanying each runner along the last stretch of every lap. Along with the unending shouts of encouragement, it was extremely heartening to see the team spirit shine through against all odds.

Pressure and hopes were placed upon our team’s last runner, Michael Choo (Y1), to attempt to close the gap in the last lap. Unfortunately, competition was stiff and unyielding. Still, Michael did the team proud with an outstanding sprint at the last leg of the relay. 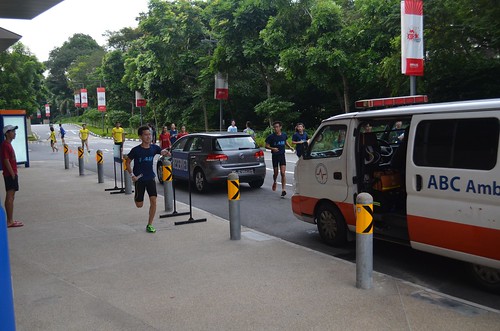 Michael Choo zooming in at the last leg of the relay 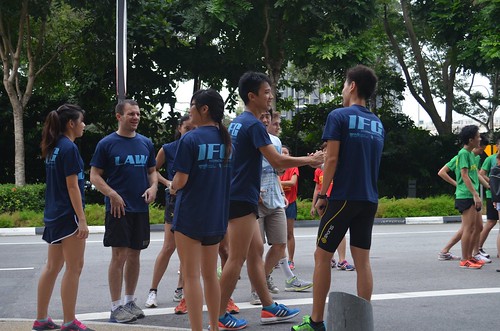 Post-run: The team gathers after the race to congratulate each other on a job well done

Conquering such a physically demanding race was by no means easy, but the determination and fortitude of the team came through above everything else. Although it is a pity that Team Law did not place in the event, the team is more than motivated to keep training and form a stronger team next year. With the attitude of champions, it is safe to say that the team has definitely fought a good fight, and ran a GREAT race!