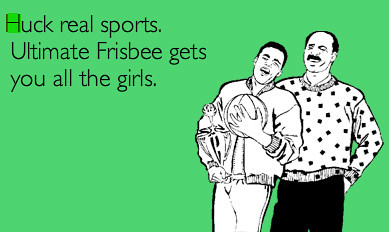 It was a fine Sunday morning. 16 Law IFG Ultimate Warriors decided to forego their beauty sleep and instead marched onto the KRC fields in an attempt to achieve glory for the faculty. It was finally time to put months of training to the test. 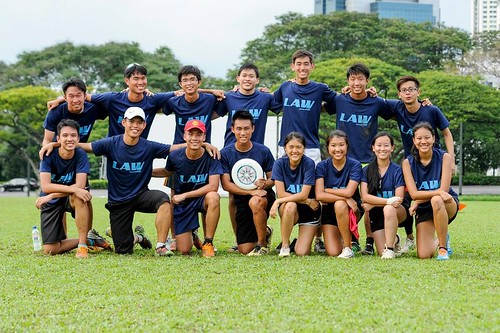 As the team huddled before our first game, our handsome and charismatic captain Zong Han (girls please follow him at @zoforce on Instagram, you won’t regret it) gave the team the most uplifting and inspiring speech of his life. The game plan was simple: “Give our 100% on the field. Play hard on the pitch, rest well off the pitch.” It was sheer elegance in simplicity. We were all moved to tears…

Our first game was against Yale NUS. Although Yale was a rather inexperienced team, the presence of SUniG player, Aaron Ong on their team posed a huge threat to us. We were extremely cautious entering into our first game of the day.

Our aggressive O Line converted two early points in the game. Yale soon caught up due to sloppy defending on our side. Determined not to lose our first game of the day, we stuck to whatever we had practiced and managed to achieve our first victory of the day. 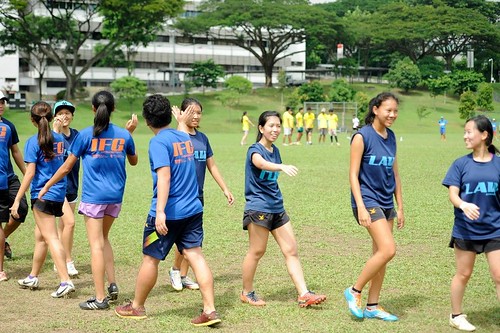 Eunice looking extremely pleased with herself after the win

Team Law’s second game of the day was against USP. A win over USP would mean that Law would qualify 2nd in the group if we lost to top seeds Engineering, but defeated the remaining teams. If we wanted to qualify for the semi-finals, USP was the team to beat! With heavyweights such as Yap “USP Carry” Wei Chiang on their side, we knew this wouldn’t be an easy game for us.

The match started off with Nicholas Tong (Year 4) and Jason Lim (Year 4) rising up to the occasion, showing that experience really does matter as they were critical in Team Law’s smooth play. Team Law took the lead but efforts by Wei Chiang and Issac Yee led to USP equalising the game at 4-4 at the end of 25 minutes. With the blow of the whistle, the umpire signalled to us that both teams would play for a universal point. The winner of the next point would take the game. 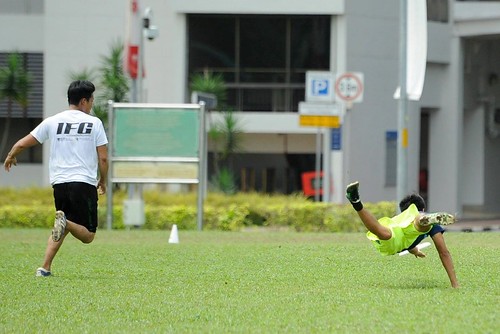 It was a do or die moment for Team Law. Determined to win the point, Team Manager, Ultimate Frisbee Superstar Chua Yongquan decided to field the best line we had. Pride was on the line for both teams. 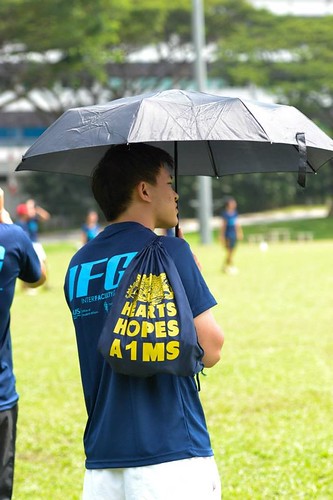 Our Manager commanding the game from the side lines

The last point felt like an hour as both teams committed mistakes which resulted in turnovers. Cross field swings soon turned into hucks and hammers into the end zone as players from both sides grew tired and frustrated. In the end, USP emerged victorious by converting the final point.

The Man of the Match would surely be rising Year 2 star Lee “Baby” De Hong. His impeccable defence played a pivotal role in containing key players from USP. He further contributed by scoring a contentious point which USP contended that he caught the disc outside the end zone. 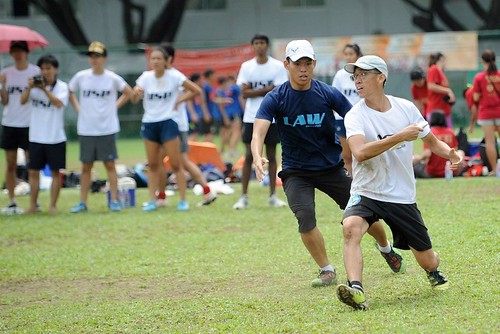 One of the rare moments that De Hong’s hands were not all over Wei Chiang.

It was a hard fought game by both sides. As both team huddled into a spirit circle, we thanked each other for the well-spirited game and wished USP the best of luck. Although this loss meant that Team Law was almost knocked out in the group stage, we were determined to give the remaining of our opponents a run for their money.

Our third game started under the scorching sun after lunch. We were revitalised and ready to play but Engineering, being top seeds of the group, were out for blood. 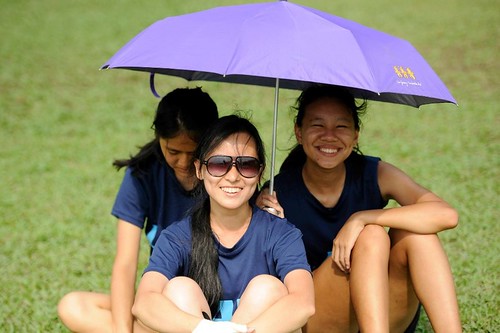 Some of us were not affected by the hot weather 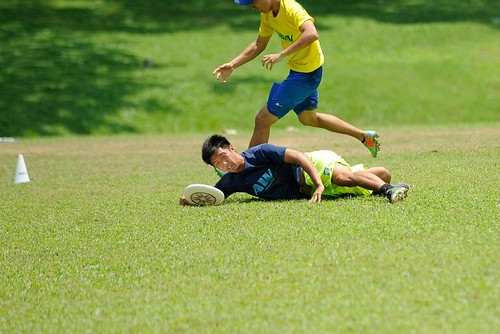 Huge sky by Tim, jumping over 2 defenders before snatching the disk and landing on the ground. The side lines roared, but Tim being Tim was not amused. 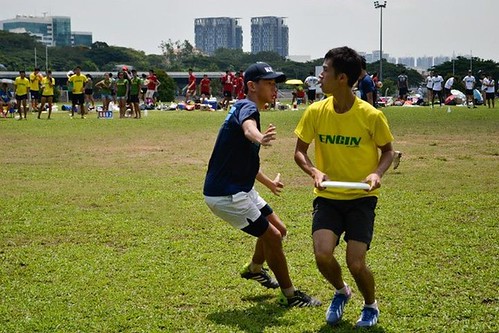 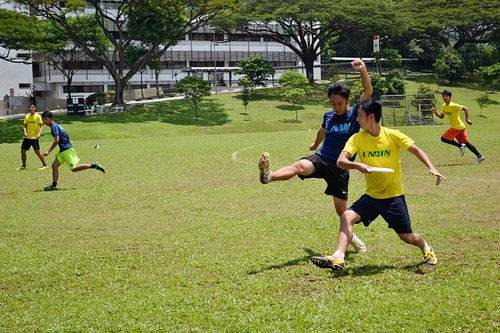 Everybody is kung-fu fighting!

Despite Team Law’s early efforts, Engineering, being top seeds of the group steamrolled their way to a 6-2 lead. For the final point, Engineering hammered in the last nail into the coffin by adopting a zone defence. It was almost impossible for Team Law to score.

The match ended 7-2 in favour of Engineering. Engineering’s game was smooth and exploited our defensive mistakes while we were unable to score due to Engineering’s solid defence. It was indeed an eye-opening experience playing with Engineering.

Our game against Biz was one that we had been looking forward to. We had no knowledge of how good Team Biz were taken by surprised when they decided to adopt a horizontal stack against us, a strategy that many of us have never played against before.

Nonetheless, Team Law stuck to our drills and defended hard and took an early 4-2 lead over Biz. 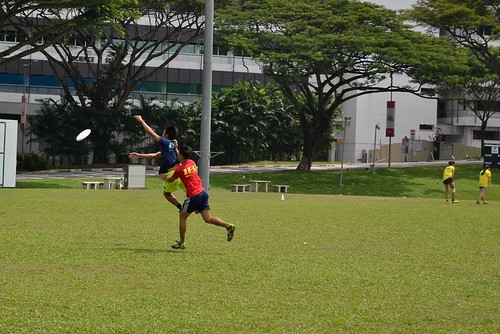 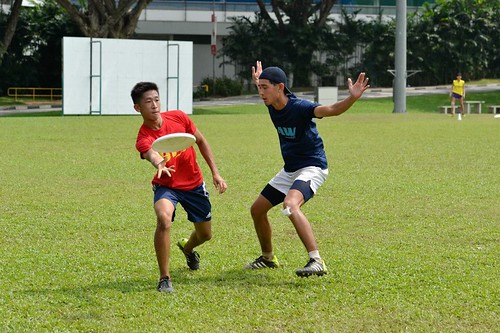 Some flapping action by Law School’s very own Tieh-minator 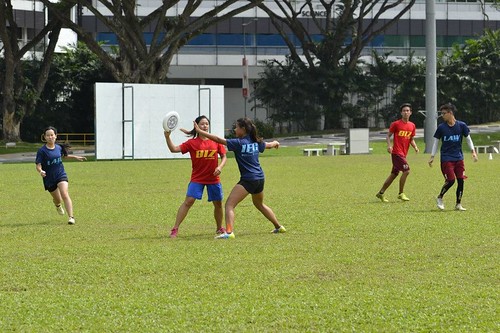 It was towards the closing stages of the game when the heat and fatigue took its toll on the team and Biz were able to capitalise on many defensive errors to equalise the score at 4-4. Determined not to let history repeat itself, Team Law substituted in an aggressive offensive line in an attempt to convert the last point.

In the end, a defensive mistake allowed Biz to score the final point of the game. It would be a lie to say that we weren’t disappointed with this score and there were many areas that we could have done better. Defensive errors, coupled with bad decision making had cost us the game. Nonetheless, we took the defeat in our stride and treated it as a lesson for us to improve.

With the semi-finals out of our grasp, we went into the last game of the day with nothing to lose. Our beloved and totally awesome captain decided to come up with a perfectly rhymed poem as a cheer which was aggressive yet simple to execute. At that point in time, this writer thought that he was looking at Singapore’s very own Lang Leav. 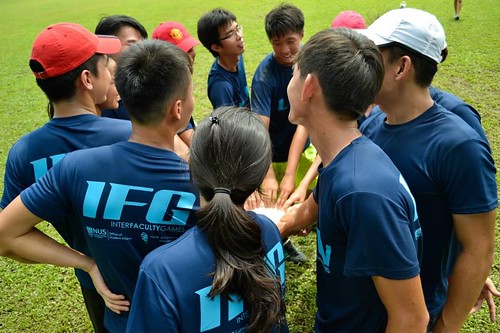 With both Law and Dentistry out of contention for the next round, both teams decided to have as much fun as they could in the last game of the day. 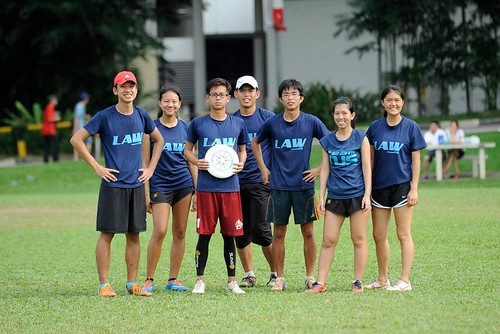 While waiting for Dentistry to form the line… 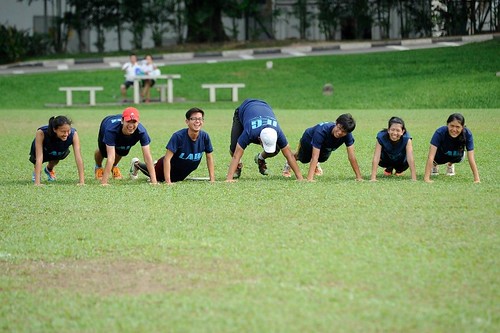 When it became evident that Dentistry wasn’t ready 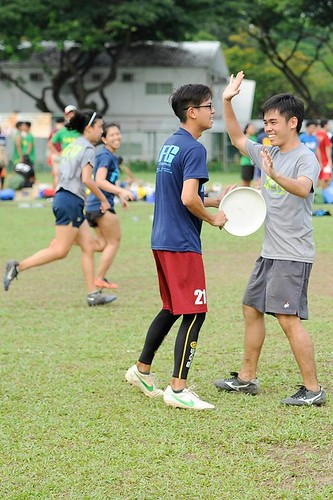 Both teams clearly enjoying themselves. Spirit of the Game yo! 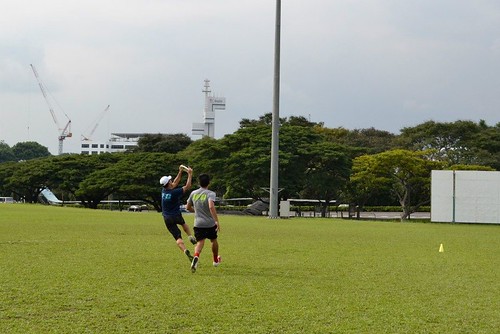 De Hong showing off his calf muscles, AND scoring a point at the same time. Now that is impressive! 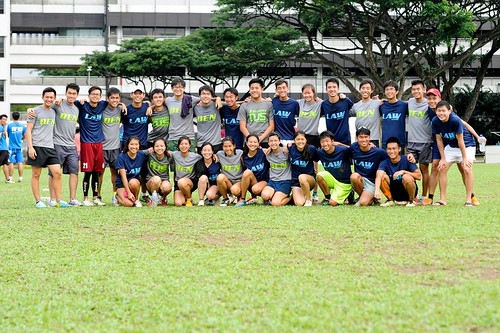 The match ended 7-2 in our favour. It was a well-spirited game and both sides clearly enjoyed themselves! 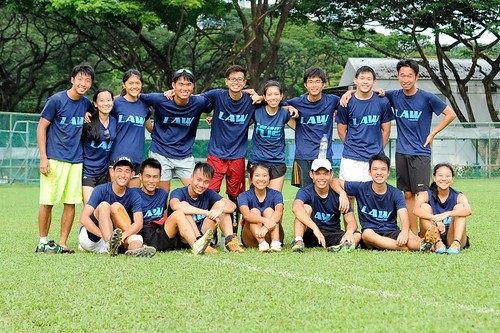 With the end of our last match of the day, the IFG Ultimate Frisbee team’s campaign had come to an end as well. We would like to thank everyone who had helped us and supported us in one way or another, and also to seniors who came down and assisted us in trainings. Special shout-outs to our Team Managers Liwen and Yong Quan. We will train harder and come back much stronger for IFG 2015! 
6 Prawns and a Beer