30th August was a special day for the kings and queens of the game of shuttlecock. Our impressively assembled badminton team arrived at NUS Multi-Purpose Sports Hall (MPSH) with the goal of doing Team Law proud. In spite of drawing into a tough group comprising of powerhouses Science and Engineering, the players were optimistic of their chances of progressing.

The team commenced the day with a match against Business. It was a pretty tense affair as both teams comprised of very strong players who were determined to do their faculty proud. After a series of long battles comprising of doubles and singles matches, the scores were tied at 2-2. Elvis Lim from Team Law was then given the responsibility of single-handedly winning the final game. After some long-lasting rallies and several skilled moves, Elvis emerged victorious and Team Law was handed the advantage. This was a dream start and there was a general feeling of euphoria within the team.

After such heavy exertion, it was finally lunchtime and the team stayed together over lunch to reflect on their game. They also took this opportunity to bond and catch-up especially since we have so little time to do it in school.

As the next match was against the all-too-good engineering team, Team Law captain Jayden Chew Jing Hao took advantage of this long break to also discuss some specific tactics such as the weaknesses of individual members in the opposition team. As the team puts it, this was especially useful as Jayden had first-hand experience playing against the teams in the 2013 edition of IFG and was aware of the strokes the opposition players were fond of. However, despite fighting hard for every point on the table, Team Law lost 1-4. Special mention would go to Elvis who again managed to win his singles match and this was a sign of things to come from this young man.

With 1 match in the bag after 2 rounds, Team Law was determined to finish the day off with a bang. The next match was against the unpredictable USP team. Although USP is a small and young faculty, they did send in players who were able to pose a strong challenge. The pressure was on Team Law who started

the match as favourites. With minimal expectations and pressure on them, USP went all out to prove their worth. This led to a tough and gruelling battle that went down to the wire. Kyle Yew and Teo Hooi Li (Lili), showed great understanding in their mixed doubles partnership and outwitted their opponents on court. This led to Team Law eventually triumphing 3-2 and it was indeed a deserved result. This meant that the team was still in the running to qualify for the knockout stages and it gave them the added motivation to train for the last 2 matches. 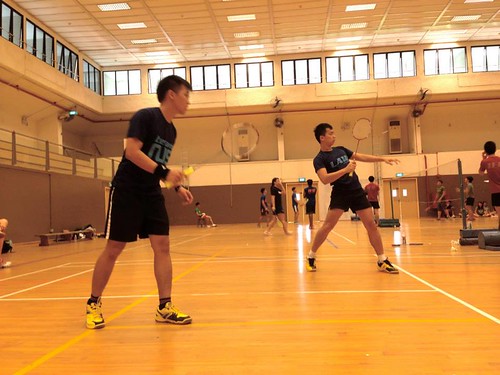 On September 6, the teams gathered again at MPSH for the final 2 games of the group stage. First up was the game against the much dreaded science team. With engineering and science winning all 3 of their previous matches, Team Law knew they were in a must-win situation to stand any chance of qualifying for the semi-finals. As the team had refined their techniques over the week and met up to discuss on the improvements to be made to their game, they were not daunted by the task at hand. Team Law put up a brave fight and were not discouraged despite initial losses to the science team. Team Captain Jayden and Boon Xin deserve special mention for their performances as they won their mixed doubles game against the science team. Alas, the team lost out 1-4 despite the praiseworthy performances from the entire team.

With a place in the semi-finals mathematically out of reach, the team had their hearts set on leaving the competition on a high. Their final obstacle was the team from the School of Design and Environment (SDE). Without the added pressure of needing to win the match, the players from Team Law went out to enjoy their game. This culminated in some brilliant performances from players like Wei Rong and Atiqah. Team Law had the final laugh as they took the game by storm by a score of 4-1. This meant that the team finished 3rd in their group which is indeed a commendable achievement but unfortunately, it also meant they missed out on the knockout stages by the narrowest of margins. 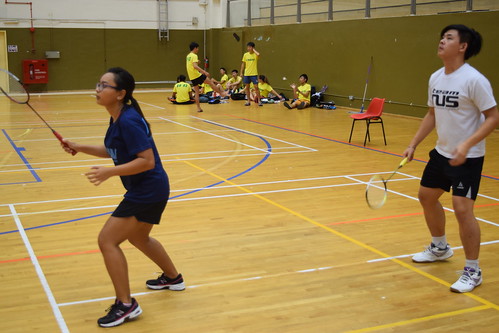 Atiqah and Jayden bringing their A game to court

The team may not have emerged champions but they definitely won over our hearts through the dedicated performances. As team captain Jayden puts it, “Victory and failure can be temporary but the friendships built would resonate for a long time.” This indeed emphasizes the spirit of the IFG games in that bonds are formed and friendships are built. Jayden also reserved special mention for Tan Sih Si (Y1) and Jesslyn Zeng (Y1) who played competitive Badminton for the first time, showing great potential and fighting spirit. The team’s deep-felt thanks also goes to the graduating seniors, Lili and Chun Han for their valuable experience, guidance and dedication to Team Law Badminton for the past 4 years. 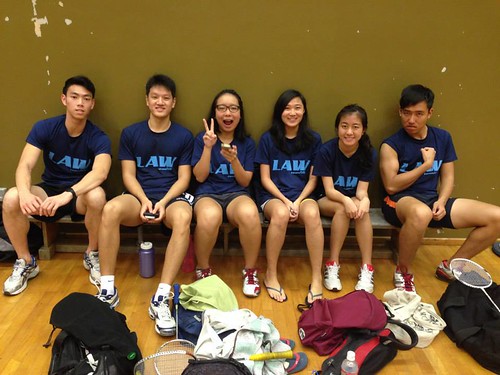 It’s time for a team shot!

A special shout-out to Team Law (Badminton) comprising of Teo Hooi Li, Lim Boon Xin, Chong Kai Xin, Tah Sih Si, Jesslyn Zeng, Nurulhuda Atiqah, Kyle Yew, Wong Chun Han, Elvis Lim, Lim Boon Tiong (Team Manager), Soh Gill (Team Manager), Gan Wei Rong (Vice Captain), and Jayden Chew (Captain). With the Med-Law games approaching, Team Law would definitely be raring to go again and is welcoming badminton fanatics to join them in their next challenge. In the words of Eleanor Roosevelt, “The future belongs to those who believe in the beauty of their dreams.” With that, let’s hope for Team Law to grow in strength and come back with a blast.

P.S. All the best to Year 1s rushing for time to complete (or should I say start) the Closed Memorandum assignment.