With the dawn of the LawMed season, the battle of the year is finally here! Last Saturday, our Women’s Soccer team, also known as the Legal Eagles, took to the field against strong opponents from the Medicine team. The Legal Eagles braved the burning sun, flew across the field at breakneck speeds, fought hard for possession of the ball and had some almost-goals. Even with spectacular saves by goalies Callie and Ermy, however, the Medicine team pulled ahead and ultimately proved too strong to conquer. 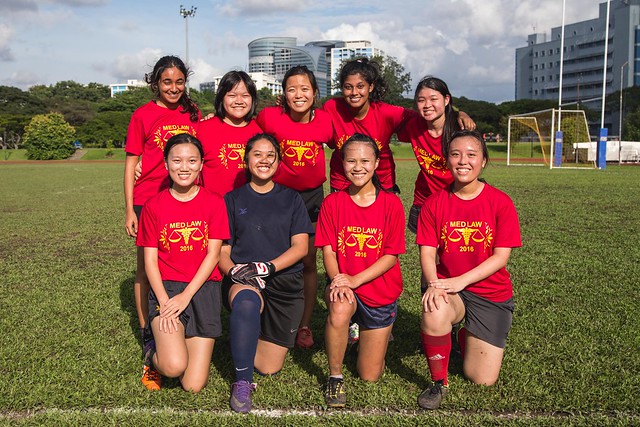 Soccer is such a popular sport that this writer thinks the rules need little explanation, but for those who have been living under a rock, soccer is a game where two teams kick a ball around and score into a goal. There was a slight modification for our game against Medicine, with the girls playing on half the field instead of the full field.

As our soccer girls laced up their boots and prepared to take on Medicine, Mathea (the Greatest) turned around and told me: “Okay, no matter what happens right, we only lost 2-0.” After a traditional “Go Law!” cheer, the whistle was blown and the game started.

The intent of Mathea’s statement was made clear when the Medicine girls immediately gained possession of the ball and edged it towards the goal at lightning speed. The players shifted to our side of the field, with our girls defending valiantly. 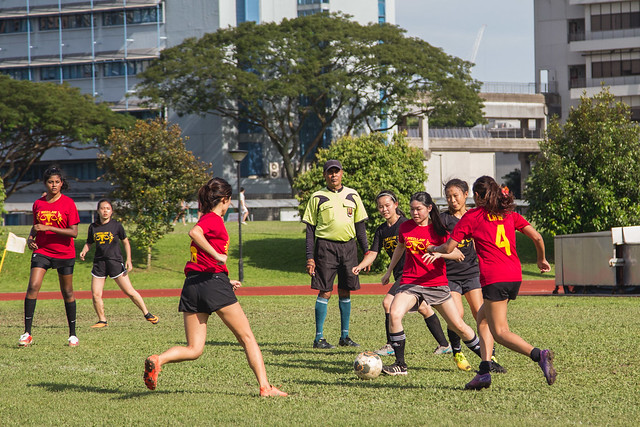 Midfielder Jamie kept possession of the ball despite being chased relentlessly by team Medicine. 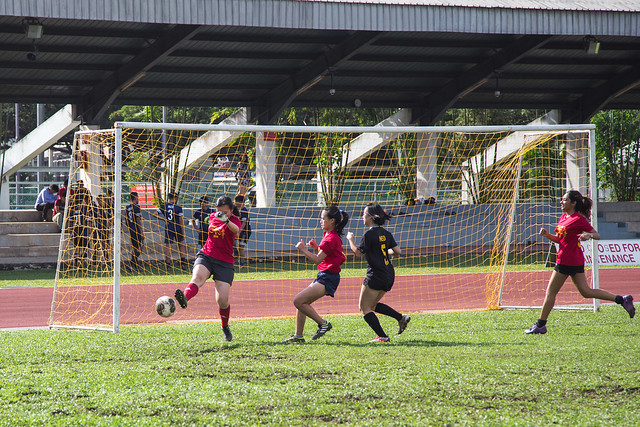 Impressive teamwork between our girls, Charmaine and Callie!

Our girls tried their hardest to advance the ball up Medicine’s side of the field, but to no avail. Even with this brilliant pass by our centre-back Sarah to attacker Trix, the ball was later intercepted by Medicine’s players with some tricky footwork. 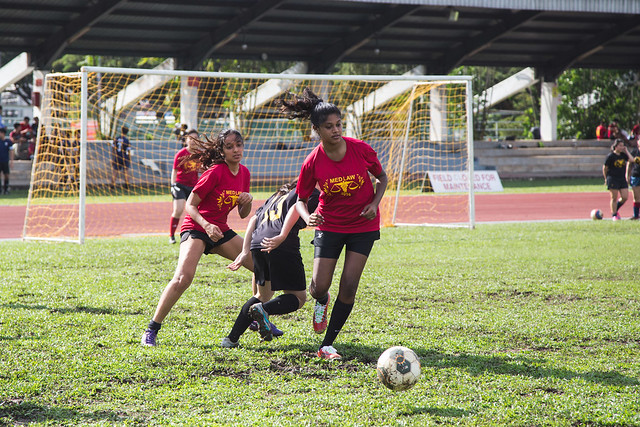 As Medicine brought the ball back to the goal, their attacker feinted, then managed to score a goal with a calculated kick when Callie was unsuspecting. 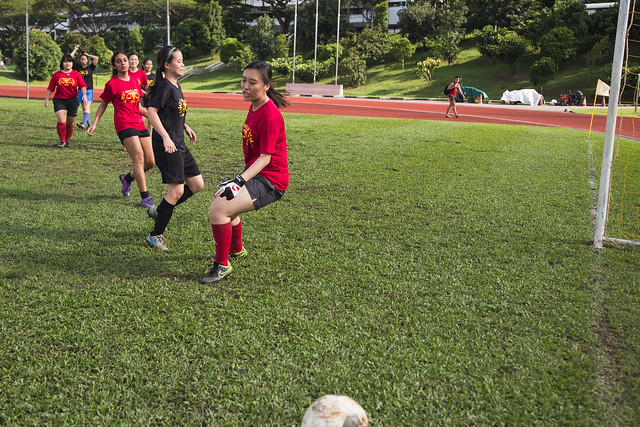 ^ Callie’s dismayed face when she realised she had been tricked

At half-time, the players took a two-minute break and had a pep talk to reinvigorate their spirits. With the arrival of goalie Ermy, the team entered the field with new determination. Ermy’s keeper instincts kicked in immediately, and she was diving for the ball within minutes of the whistle. 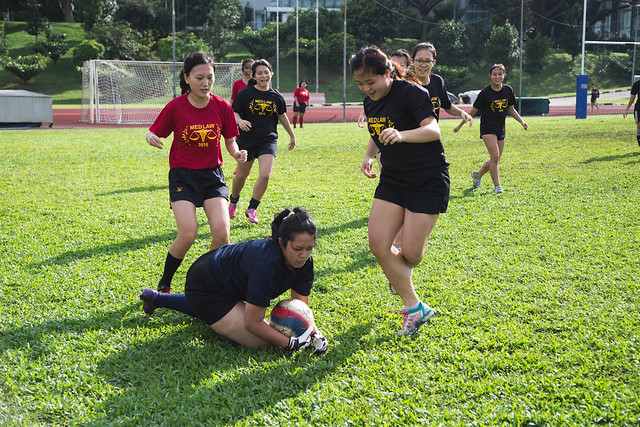 Ermy throwing herself onto the ball, preventing Medicine’s attacker from scoring (any more than they already had) 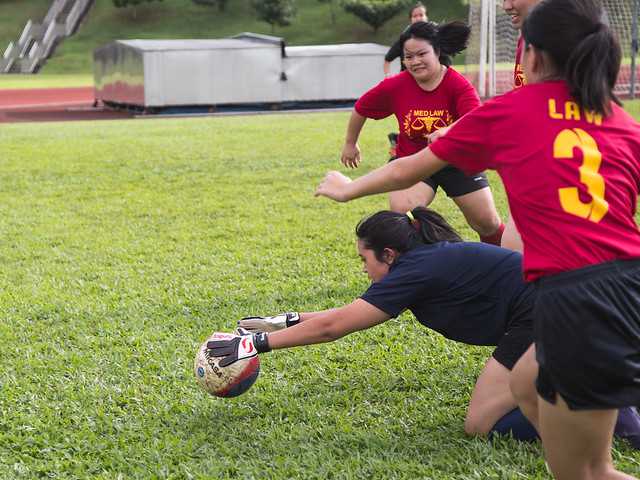 “I gotta catch ‘em all” — spectacular dive by goalie Ermy

The second-half of the game was much more intense than the first, with shouts of “Pressure! Pressure!”, “Go for it!” and “SUPPORT HER!!!!” alternately from Mathea and Ermy dominating our eardrums. In comparison, Medicine, whose players had been screaming directions in the first half, seemed tired and were much quieter. 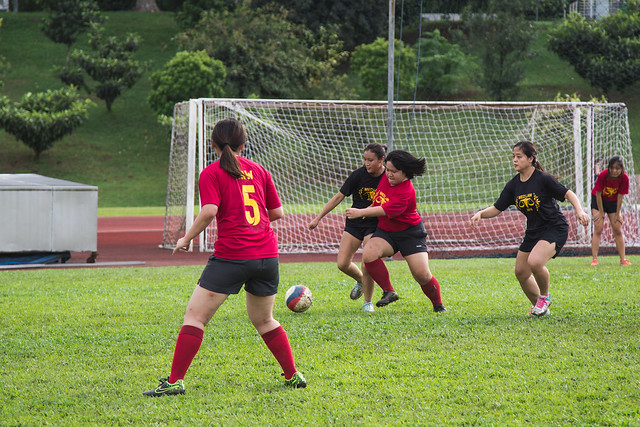 Mathea on fire in the intense fight against Medicine

Callie, relieved of her goal-keeping duties, tried to snatch the ball from Medicine

Our attackers were able to near the Medicine goal and almost scored a few goals — the ball only missed by a fraction or was grabbed by their goalie at the very last moment. Unfortunately, the Medicine team 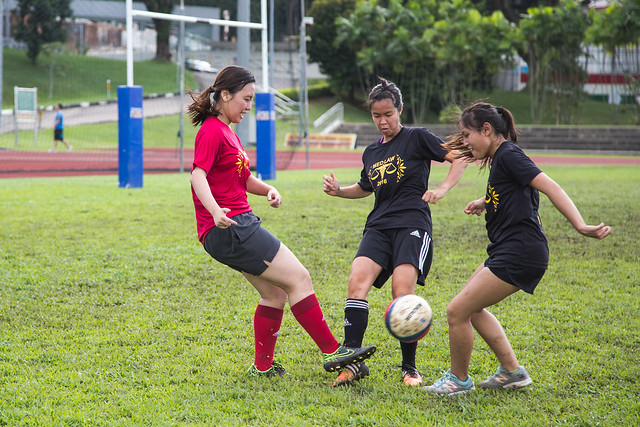 had a chance at a penalty kick and they sent their strongest player. It was a face-off between goalie Ermy and team Medicine’s attacker. However, the moment the referee blew the whistle, the attacker kicked into action and sent the ball whizzing past, right into the top-right corner of the goal. This made the only goal that Ermy had let in through the entire second half, which was quite a feat considering the prowess of the Medicine team. 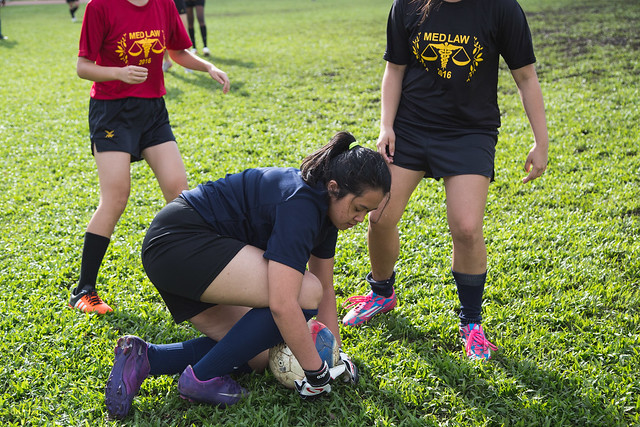 “I am the Keeper of this Ball”

All in all, we are very proud of our Legal Eagles for fighting hard against team Medicine! These girls also deserve a clap on their backs for coming down to run around in a muddy field on the first day of the Chinese New Year holiday. As somebody famous once said, “lose the battle but win the war” — the Women’s Soccer team and this writer would like to wish the rest of the sports great victories against Medicine (if possible), as well as a happy Chinese New Year. 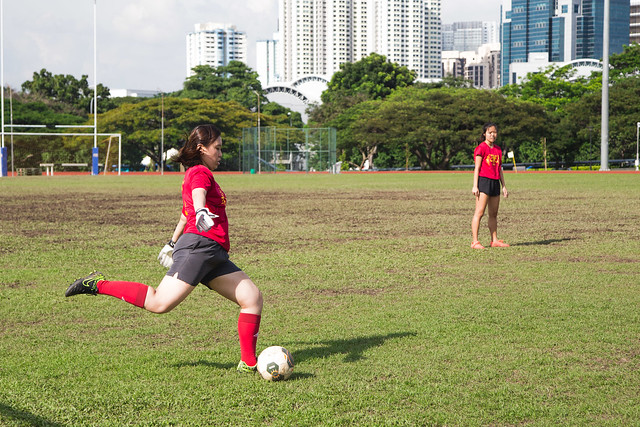 We hope you score a lot of angpows! 
How To Get Your Training Contract (A Pro’s Guide)