Editor’s note: Like fellow headline-maker President Barack Obama, Team Law showed that they were capable of playful banter and witty comebacks at the LAWMED 2013 Debates, while Team Med was busy looking for their ulnar nerve.

To those readers who had enough school spirit to be present in the Block B Auditorium on the evening of the 23rd of February (on a Saturday no less), you must have felt extremely fortunate to have witnessed the remarkable wit and eloquence displayed in the Law-Med Debates 2013, which marked the end of this year’s Law-Med Games. Having already watched the Law debaters in their full glory, there really is not much point in continuing to read the rest of this article since it will be unable to properly encapsulate the magnificence of the night. 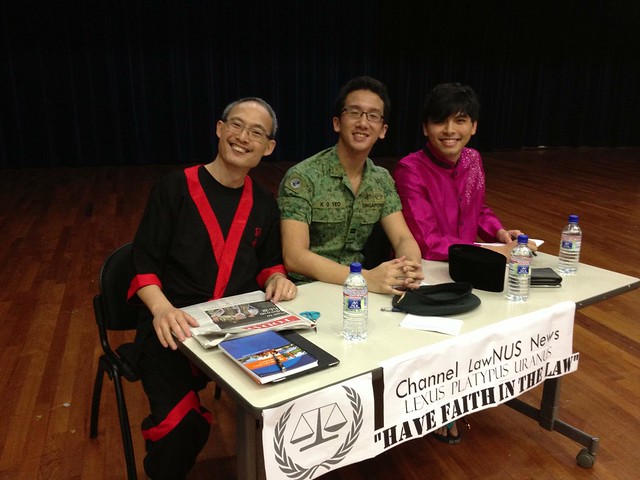 However, in the interest of not depriving the rest of our community who must be eagerly awaiting a recap of what they had missed (for shame!), the following paragraphs will have to make do. It is at this point that this writer must mention that he happens to be one of the debaters on the Law team that night and that it is harder than it looks to write an article about yourself — therefore please forgive the complete lack of objectivity as well as humility displayed here as I try not to disappoint the Law Annual’s kind invitation to pen down my thoughts.

The motion for the debates this year was “This House believes that lawyers are better at making headlines than doctors”, and Team Law was the Proposition, obviously (both sides entertained the option of switching sides and having Law as the Opposition/Med as the Proposition, but it did not make sense to me to waste time trying to claim that doctors are better than us at anything, when it’s clearly untrue).

The debates opened with a short address by the Guest-of-Honour, Dean Simon Chesterman, where he brought up a few pertinent issues, much to the delight of the audience (this can be found on Overheard).

After the introduction of the adjudicators, two of which were Prof Goh Yihan (dearly beloved by most taught by him and particularly each year’s batch of freshies) and Prof Arif Jamal (dearly beloved by those who actually enjoy Introduction to Legal Theory/Comparative Legal Traditions), star emcee of the night Syazana Yahya (Year 2) then patiently waited for her Med counterpart to finish introducing Team Med — which essentially involved thanking the two Med students for being interesting classmates (um okay) and sucking up by praising his professor.

Warning that her introductions would be pretty lengthy, Yahya first introduced Team Law’s first speaker, Prof Joel Lee as a veritable kungfu master who should never be messed with. Far from being intimidating only while sparring, she noted that his areas of expertise were Mediation and ADR — ADR in this case being aggressive dispute resolution, which reflected his attitude in the bedroom as well. 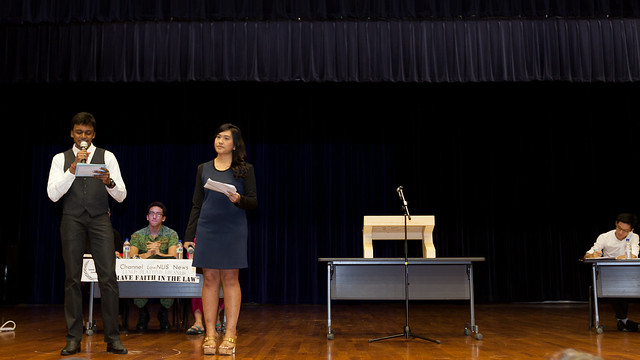 Yahya went on to exclaim that our second speaker, Nigel Yeo AKA ‘me’ (Year 2) was “a beautiful chocolate man” and that I loved to give head … to the Year 2 Class Committee. She then observed that my top looked very becoming on me, and that if she were on top of me she’d becoming too (which seemed grammatically incorrect, but whatever).

Finally, after introducing our third speaker, Zulhafni Zulkeflee (Year 2) as the minority representation of Team Law as well as the 2012 FOCC Chairperson and Law Club Vice-President (which displayed the man’s solid substance), she highlighted that his proficiency in public speaking has resulted in the Speaker’s Corner becoming his favourite “korner to relack in”. She also mentioned that in his free time he enjoys strumming on his guitar and singing emotional melodies, but forgot to mention his secret pastimes of sepak takraw and silat.

The debates got off to a roaring start when Law’s first speaker, Joel (as he insists on being known as), nearly forgot that he was the first speaker and only went up to the stand when I prompted him. He had been busy cutting out excerpts from the day’s newspapers — or rather, making headlines. Apologizing for our flamboyant attire (Joel was in his Wing Chun exponent robes, I was decked out in full military Number 4 uniform complete with ceremonial rapier, and Zul was adorned in traditional Malay garb, in shocking pink, from songkok to slippers), Joel explained that we thought we were attending a press conference.

Admitting that we were not master (de)baters, he nevertheless proclaimed that our team would rise to the hard occasion, such that the audience would sit erect in their seats right till the very climax of the debates. Joel then laid out the structure of Team Law’s arguments, he proceeded to argue that lawyers by virtue of our nature, education and training, are adversarial attention whores — thus making our inherent ability to make headlines much greater than that of doctors. Jumping on the bandwagon of the various Confessions pages that sprouted up recently, Joel observed that Med Confessions were along the lines of “I lost my slippers during lecture” as compared to “I like to stand in crowded lifts because I get to grind the girls” on Law Confessions.

In response, the first Med speaker (or Doctor Salacious as he held himself out to be), who had pulled out devil horns to try and add flavor to his desperately monotonous office attire, essentially spent his 8 minutes performing mangled renditions of Moulin Rouge, Thriller, Pricetag and BDSM. I fail to see why he could not have simply made his point (that doctors are normally the pinnacle of decency and goodness but when they are bad, they are worse than lawyers) by doing a striptease on stage or something. On second thought, I’m really glad he didn’t do it and chose to let our eardrums suffer a roasting instead.

When it was my turn to speak, I first observed that Doctor Salacious might be an example of how doctors make the headlines since his particularly effeminate performance could get him embroiled in a section 377A case. Noticing that Team Med seemed a little daunted, I assured them that my military uniform was purely decorative and that I was not some military policeman there to round them up to Pulau Tekong, seeing as the two students had not done a single shred of National Service. I then proceeded to demonstrate how the physical quantity of headlines involving lawyers in the news far outstripped those involving doctors, before arguing that the quality of our headlines were better as well. From sex blogs to nude photos to embezzling of funds, we lawyers certainly make the most scandalous news (the type most appreciated by the public).

Halfway through my speech, an ex-student of Joel’s stormed down to the front to confront him about a bad grade he had received. When the student attacked Joel, who had gone down to peaceably resolve things, Joel did not hesitate to dispatch him with a few well-placed Wing Chun blows and throws. I’m not well-placed to describe what exactly happened because I was discussing debate points with Zul and answering a call while all this happened. These events happen all the time in Law school since we have a penchant for making headlines and have pretty much become boring to me. 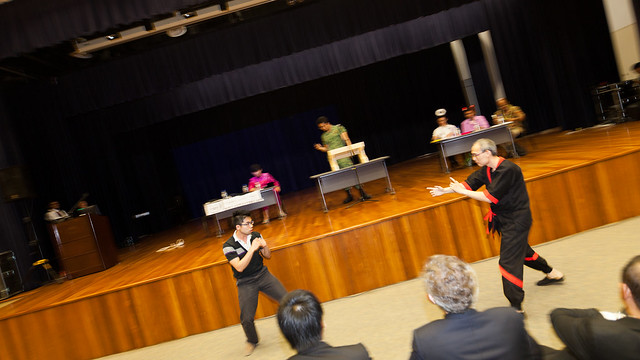 I must confess that I have no recollection of the substantive points made by Med’s second speaker — he seemed to have missed the memo that Law-Med debates are traditionally meant to be entertaining. I believe he argued that doctors make headlines being hailed as heroes, but lawyers never do much good for society, judging from the halo he wore.

Up next was the professor from Team Med, Professor Paul Tambyah who I must say did an excellent job. He was funny and engaging, remarking on my failure to apply my NS jokes only to the two students on Team Med as he wondered why Team Law tried to impress a Major with a Lieutenant, and stating that “When a dog bites a man, that’s not news. When a man bites a dog, then that’s news” to highlight Team Med’s point about doctors going bad. However, true to the spirit of Medical negligence, he mistook the motion to be “lawyers make better headlines than doctors” (rather than being better at making them), which was pointed out by at least 3 different people including Zachary Tay (Law 2) during the audience participation segment.

The debate was rounded up by Zul, who accepted the challenge from Med’s first speaker; claiming that “two can play at that game”, he responded to a point of information from Med with “Oh DAHling, call my PA, why don’t you?” In the course of summarizing our team’s arguments, he combined Joel and my points by lamenting how our efforts were unappreciated — we lawyers were trying our best to meet the 6.9 million population target in the White Paper, in handicap toilets and other places. He also noted that doctors needed lawyers to get into the headlines, either when we fight their cases for them or, in the example of Dr. Bertha Woon, only made headlines after graduating from SMU’s JD programme – despite already being a medical surgeon.

Zul observed that it seems that doctors need to be associated with lawyers in any means necessary in order to make headlines, and that he could even think of 377 other ways in which lawyers contribute to society but declined to elaborate. He ended off with an invitation for any Med girls wishing to make headlines to make use of his availability, noting that it isn’t very hard to convert.

Although the judges decided to reward Team Med’s valiant efforts by declaring them the victor, this was immaterial to Team Law because we had gone into it seeking to put up a good show for everyone who took the time to come down. As Joel succinctly puts it: “The Law Team didn’t come here to win; we came here to embody our motion — we came here to make headlines. And I believe, this we have done”.

The debates were followed by a very exciting dance performance by Law school’s very own dance group, Freedom. 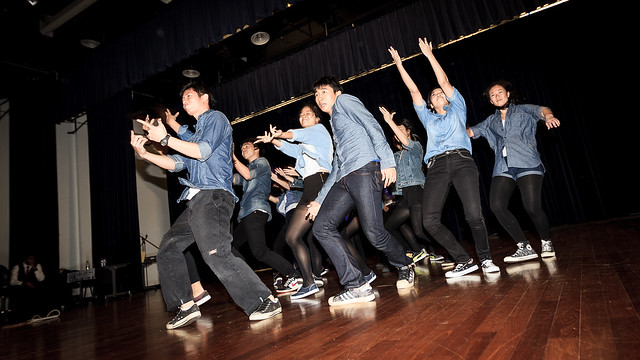 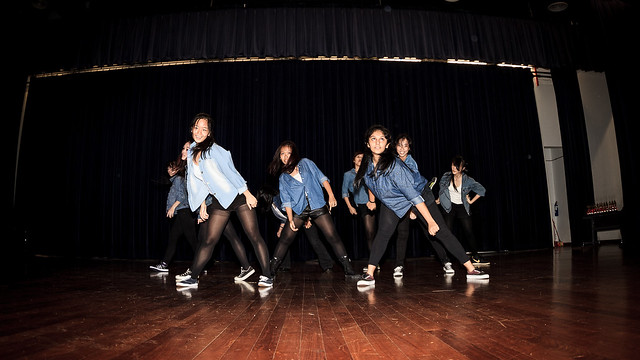 
Why you should listen to KPOP