As one approached the SRC, it wasn’t hard to spot from a distance the conspicuously well-dressed crowd gathered at the handball court. Standing neatly around the court’s perimeters, the spectators made the place seem more like an outdoor conference venue than the setting of an epic fight for supremacy between two long-time rivals. But the eager murmur amongst the spectators betrayed the excitement and anticipation that lie beneath those dapper shirts and spiffy dresses. Indeed, tension was high both on and off the court, as the last event of this year’s Law-Med Games got off to a roaring start. 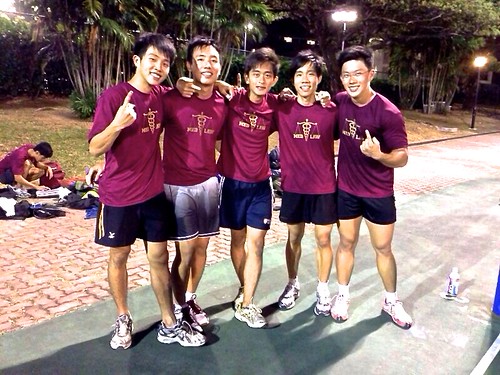 Even to your slightly colour-blind writer who couldn’t really tell the teams apart by their jerseys, the difference between the two teams immediately became apparent. Like a good set of muggers, Team Law’s attacks were short and effective, wasting no time in capitalising on each mistake made by the opposing team, while Team Medicine’s movements and responses were a tad more sluggish in comparison. Team law’s effort soon came to fruition, as Hao Ran scored the opening goal, setting a moral boosting precedent for the rest of the evening.

As the game continued, Team Law pressed on the attack. Joshua’s powerful shot gave Team Law’s a two-point lead that would last throughout most of the game. With superb passing and deadly accuracy, Yi Zhang secured another goal for the team. Eugene further cemented Team Law’s lead, as he weaved effortlessly past the Medicine defences to score another two goals. 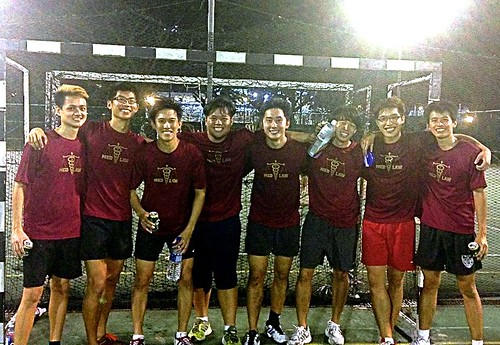 Sensing that they are rapidly losing ground, Team Medicine made a number of strategic swaps and began launching a barrage of attacks. To medicine’s credit, the team created a number of good opportunities, but their valiant attempts were nonetheless futile in the face of one of Team Law’s safest pair of hands – Timon. Following a series of insane saves, one spectator could not help but exclaim “Wow, 6 in a row” Indeed, Timon’s epic saves elicited audible groans of frustration from the Medicine supporters, as each seemingly good chance at the goal were thwarted by lightning quick movements that were almost too fast for the eyes to catch.

As the game neared its end, tension hit a boiling point. With 15 minutes to go, Team Medicine’s attacks become more unfocused and frantic, at one point causing one of the players receive a yellow card. From the sidelines, shouts of “control the game” and “two more” were heard from both sides.

Desperate to stop Law’s momentum, Team Medicine called for a timeout that did little to stop Team Law’s march towards victory.  In the last few minutes, the game got increasingly physical, with one of the Medicine players knocked to the ground at one point. That both sides’ supporters applauded when the player stood up to continue playing is testament to the spirit of sportsmanship that permeated throughout the Med-Law Games. Finally, Julian’s lightning reflexes helped to score the last goal for Team Law a few minutes before whistle time.

The game ended with Team Law winning with a convincing score of 11-9. Congratulations to our handball team, a new sports powerhouse of Law School! 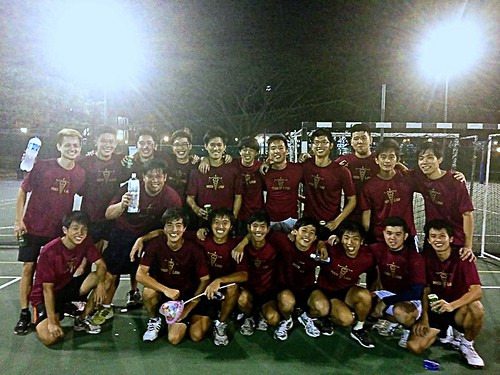 From Medicine’s perspective: “Suspense ran high as players from both teams lined up and entered the court. With the law faculty leading us by 1, our players were more determined to tie the scores once more.

The match tonight was intense from the very start. Our players had a fiery passion in their hearts that was demonstrated in each movement they made on court. With every pass, every drive down court and every shot on target, it was evident that our players were giving their all. Although the scores were even at halftime, and pressure mounted, our players remained unperturbed and kept their focus on their own game play. Unfortunately, despite all our efforts, the law team managed to secure more goals and the game closed with law claiming the Men’s Handball title.

Nobody who ever gave his best ever regretted it. Therefore, our Handball men have no reason to feel anything other than pride because from the moment they stepped on court tonight, they played with everything they had.”