The Handball match between Law and Medicine was held on 15th January at Kent Ridge. The Law-Med Handball match was quite an intense and nerve-wracking game to watch, especially towards the end when Team Law seemed to pick up momentum. If only the match could have been extended for a few more minutes, Team Law might have tipped the win-lose balance!

On a windy (*phew*) Sunday afternoon, the Law and Medicine Handball teams entered the arena ready to sweat it out with the intention of winning the match. After the ionized-water drinking, team bonding rituals, war cries, and pre-match formalities were done with, the match commenced with a lot of hope and loud cheers. 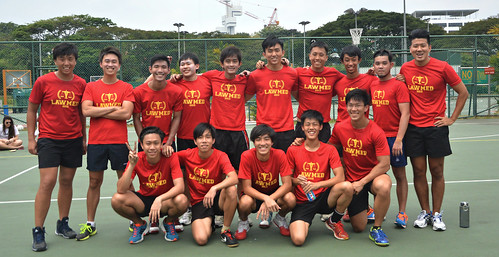 Team Medicine was off to a really good start scoring two goals within the first few minutes of the game. They established themselves as strong and confident players with good team coordination and strong vocal chords. The writer was intently watching the game trying to understand the rules since it was her first time ever watching a handball match. Alas, she could hardly grasp what was happening on the court, being too dazed/struck by how quickly Team Med seemed to be scoring goals. However, Team Law was not to be defeated easily and boy, did they put up a good fight. 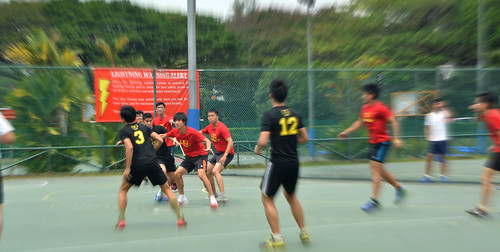 Within 10 minutes of the game, Team Med had already scored enough goals to intimidate any opponent, however worthy. Team Law’s attempts at scoring were thwarted by the Med goalkeeper.

It was the sheer desperation…err, I mean determination to score a goal and show Medicine that they were going to put up a brave fight that propelled Julian, who found a gap in the defense, to successfully score the first goal!

Eng How managed to catch the Med players off guard and ran to score a goal which evidently angered the Med keeper who shouted out to his team members, “Come back lah, I tell you to COME BACK!”. 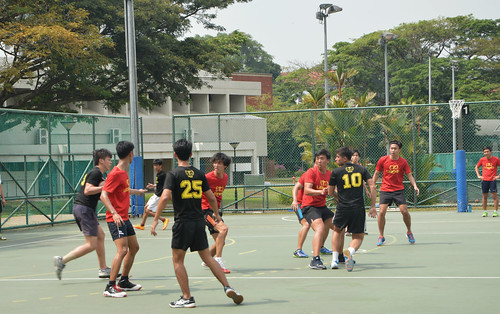 Medicine continued with their aggressive attack and played their strategy of scoring successive goals through quick passes and capitalizing on the gaps in the Law defense. However, owing to the alertness and skill of the goalkeeper, Chuan Lim, Team Law was able to prevent Medicine from scoring on multiple accounts. 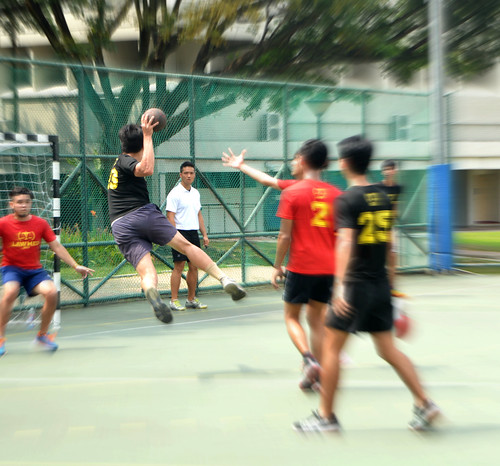 During the second half, Team law played a lot more tactically, communicating well with each other. A few minutes into the second half, Medicine seemed a tad bit fatigued after all the running and shouting they had engaged in and simply wanted to maintain their lead. Law realized this was the best opportunity to bridge the score difference and scored some really neat goals.

In spite of the fact that Team Medicine was a formidable force to reckoned with, Team Law played well and gave their best to the match. The final score was Medicine 22-17 Law.

At the end, when the team members from Law huddled, they cheered for Team Medicine. It was a truly a touching gesture which reinforced the idea that sports matches are not just to fan competitive spirit but to bring together different faculties and appreciate each others’ skills.

Article and photography by: