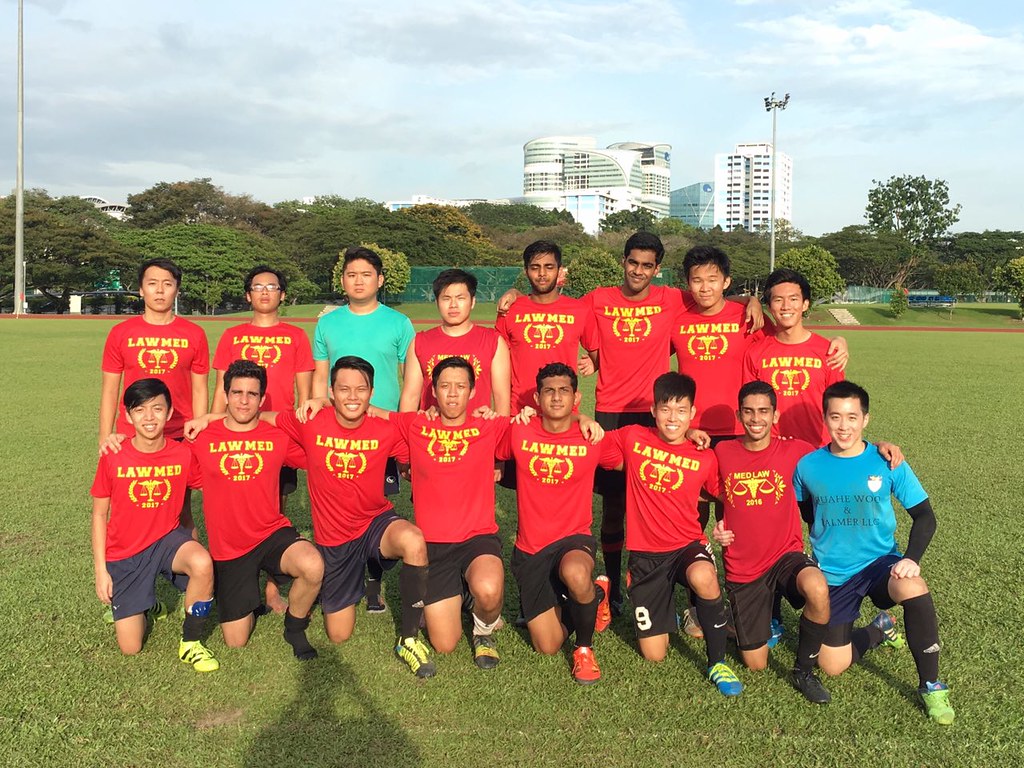 The next twist in the footballing rivalry between our two esteemed faculties took place on the afternoon of the 11th of February 2017. Having played to a 0-0 stalemate in our previous encounter at Inter-Faculty Games 2016 before watching Medicine eventually go on to lift the trophy, this was the chance for redemption.

It was clear from the outset that we were in for a tough game. Morale was not particularly high, with Year 3 veteran midfielder Marcus Hoh just deciding not to show up. We were also without the usual brilliance of winger Darren Low, but nonetheless prepared to test the theory that the team could play better without being hampered by his “ball-hogging ways”. Expectations were high for the competitive debut of new addition Adrian Hernandez, an exchange student from Venezuela who could give our team a much needed injection of South American flair.

We started the game well, creating some good scoring opportunities in the opening minutes. Thoughts that we could live to rue these missed chances started to creep in, but were quickly extinguished when we took an early lead.

Year 1 Prakash collected the ball at left-back, and tried to pick out Year 4 Ian with a hopeful punt. What appeared to be a slightly over-hit pass somehow managed to evade the Medicine keeper, leaving Ian with the simplest of tasks in chasing the ball down and tapping it into an empty net. He subsequently communicated his disappointment that not a single one of his teammates had joined him to celebrate, possibly because they were all too far away from play at the time.

While the game went on for the next 30 minutes or so, neither team managed to create any clear-cut chances and we went into half-time with a 1-0 lead. 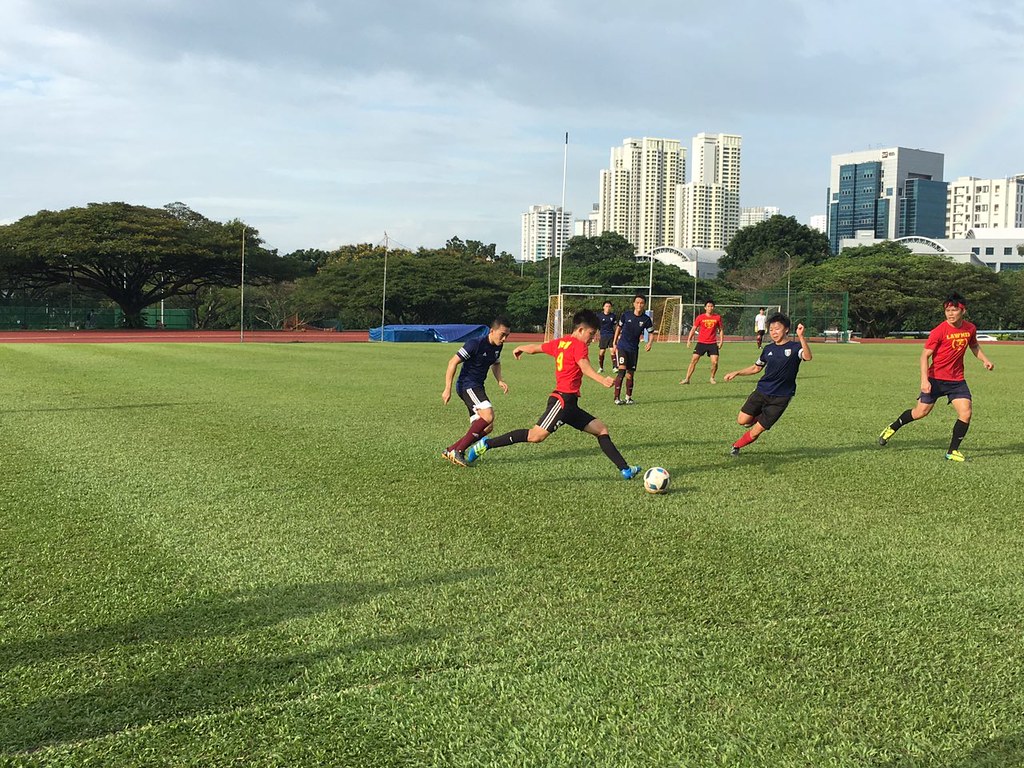 Ben switching the play to the opposite flank. 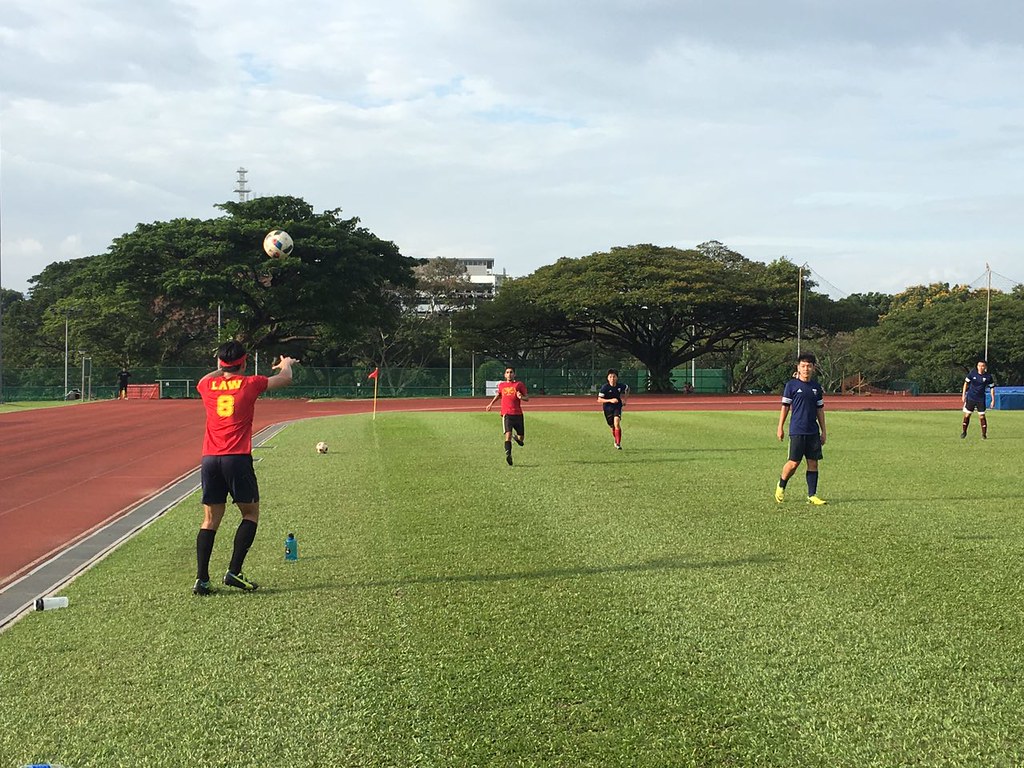 Nothing could have prepared the team for what happened next. This writer has never seen an angrier man than Year 2 Captain Josiah Tham during his half-time team talk. He unleashed on his comrades what this writer can only describe as the “hairdryer treatment” made famous by Sir Alex Ferguson during his glory years at Manchester United. It was easy to forget, at this point, that we were actually up 1-0. After ending off his speech with some typically disparaging remarks about the other team (all in good fun, of course), the second half was due to start and our boys had a job to complete. 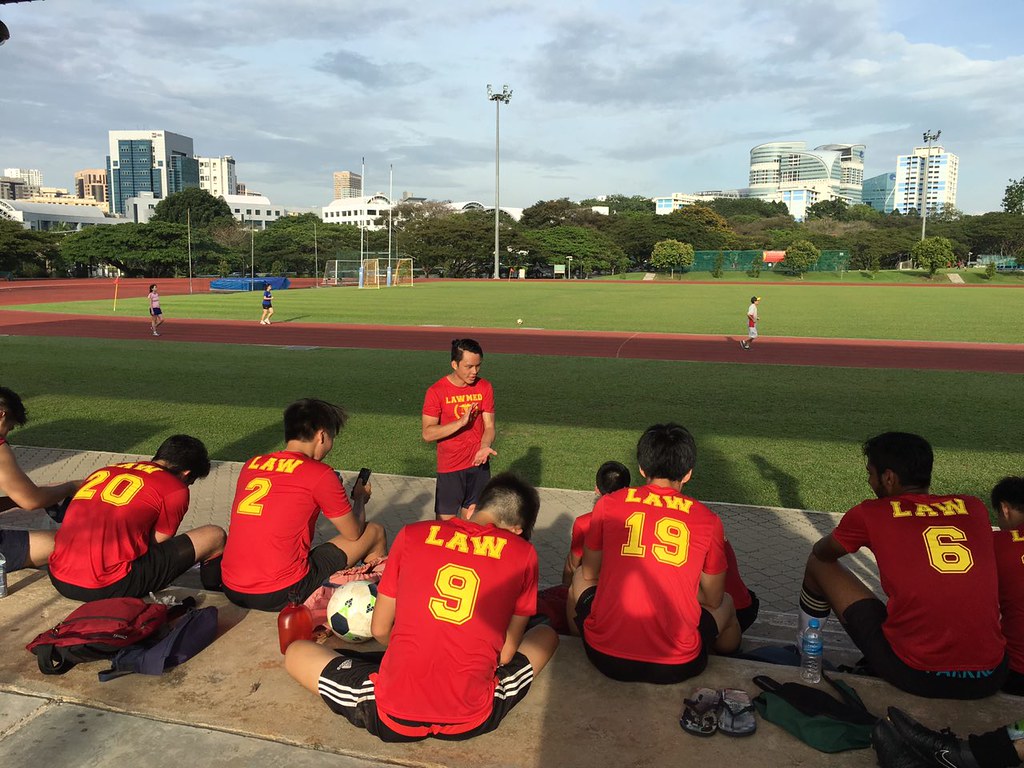 Captain Tham does not hold back, while Marcus Lee (#2) is busy texting.

We had a lead to protect, and were helped by the arrival of Year 2 Marc Legend Leung for the second half, and the continued assuredness of Year 1 keeper James Lek in goal. That said, we were not content with merely defending our lead but tried our best to add a second goal to the scoreline. Most notably, Year 1 Benedict Tan somehow managed to hit the crossbar with a speculative strike from the left flank. 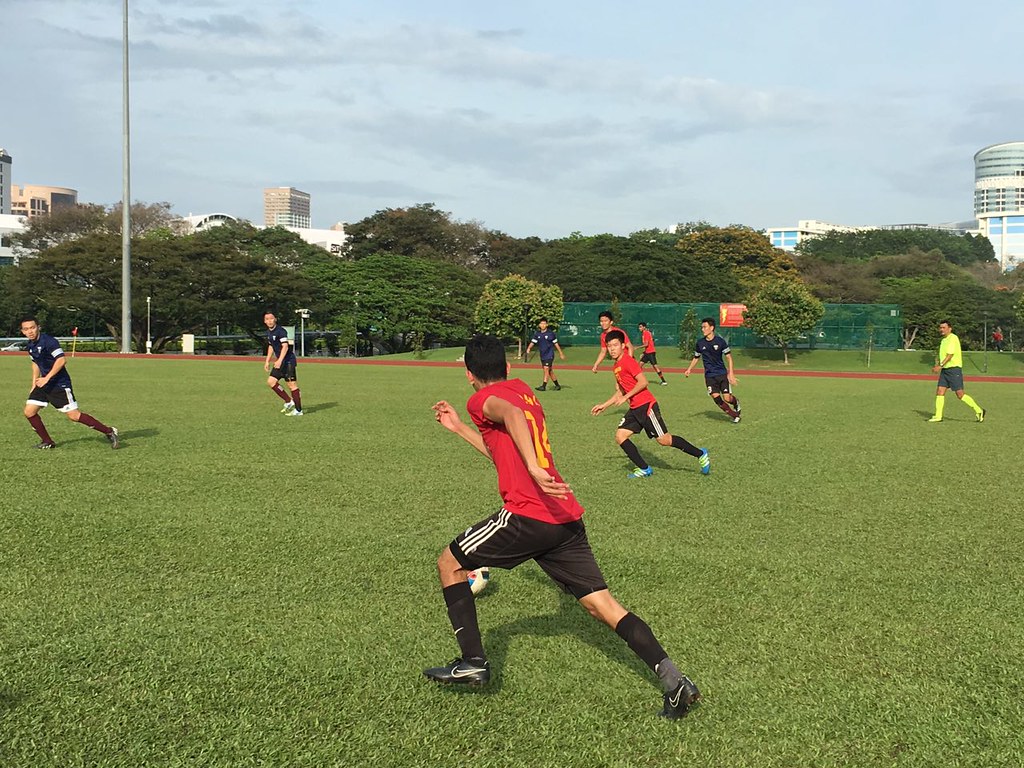 Prasith driving the ball forward on a counter-attack. 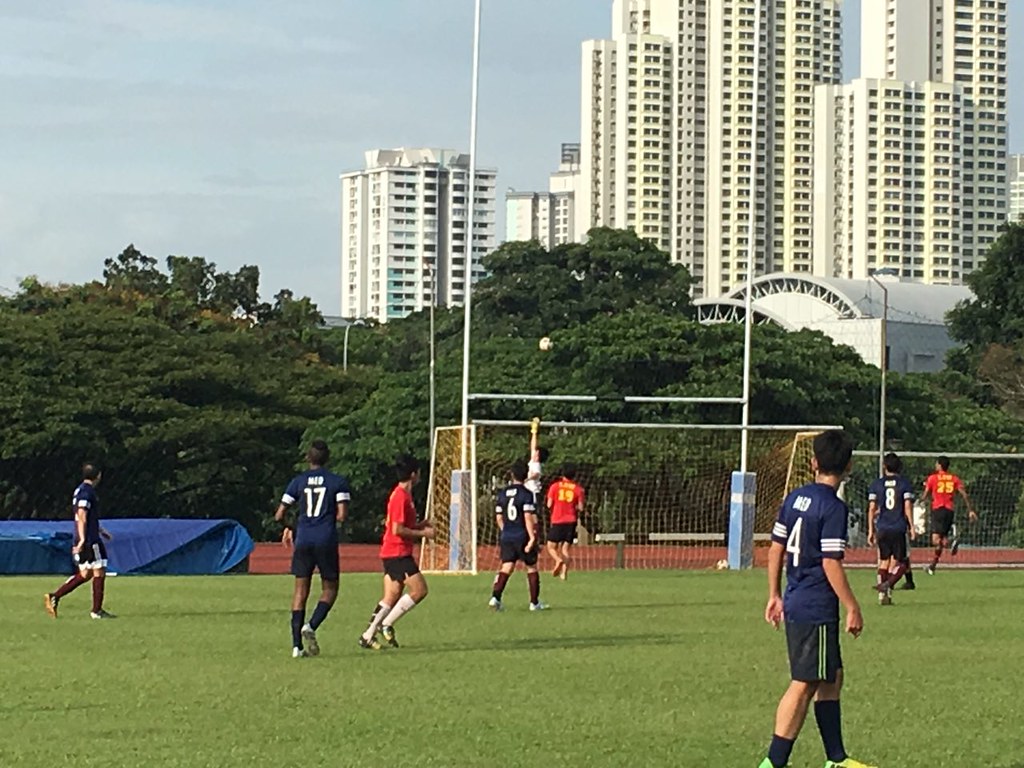 The ball bounces off the crossbar after a good hit from Ben.

Our unsuccessful attempts to score another goal provided for a nervy final few minutes of the game. In what must have been caused by fatigue from his exhausting daily activities in school, Year 2 defender Marcus Lee rolled around in our own penalty area for approximately an entire minute due to a cramp while our opponents were taking shots at our goal. Thankfully, he managed to get up and on with the game, and Medicine exhibited great sportsmanship in returning the ball back into our possession after the incident.

We eventually managed to see the game through after scoring an early goal, and this writer is proud to announce that the medals for LawMed Soccer (M) 2017 will be coming to BTC! Captain Josiah was also visibly happier after the final whistle, and his post-match team talk consisted of much more praise and encouragement at a much lower volume. Congratulations to the team for emerging victorious in a closely-fought contest. 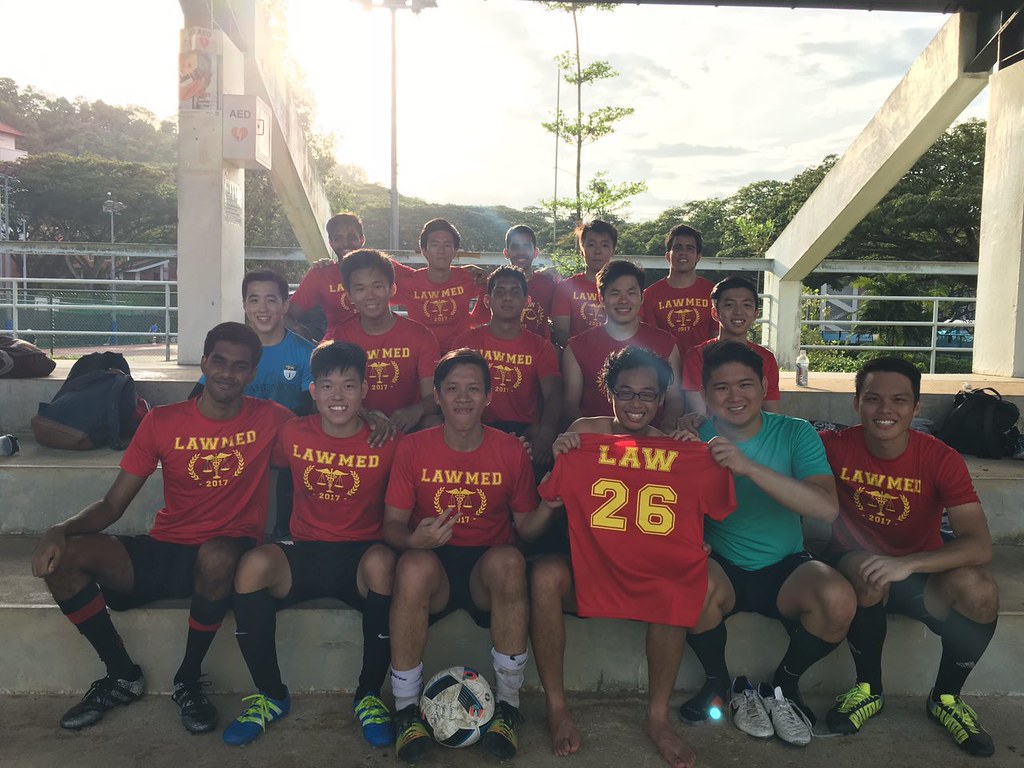 All smiles after a hard-earned victory. 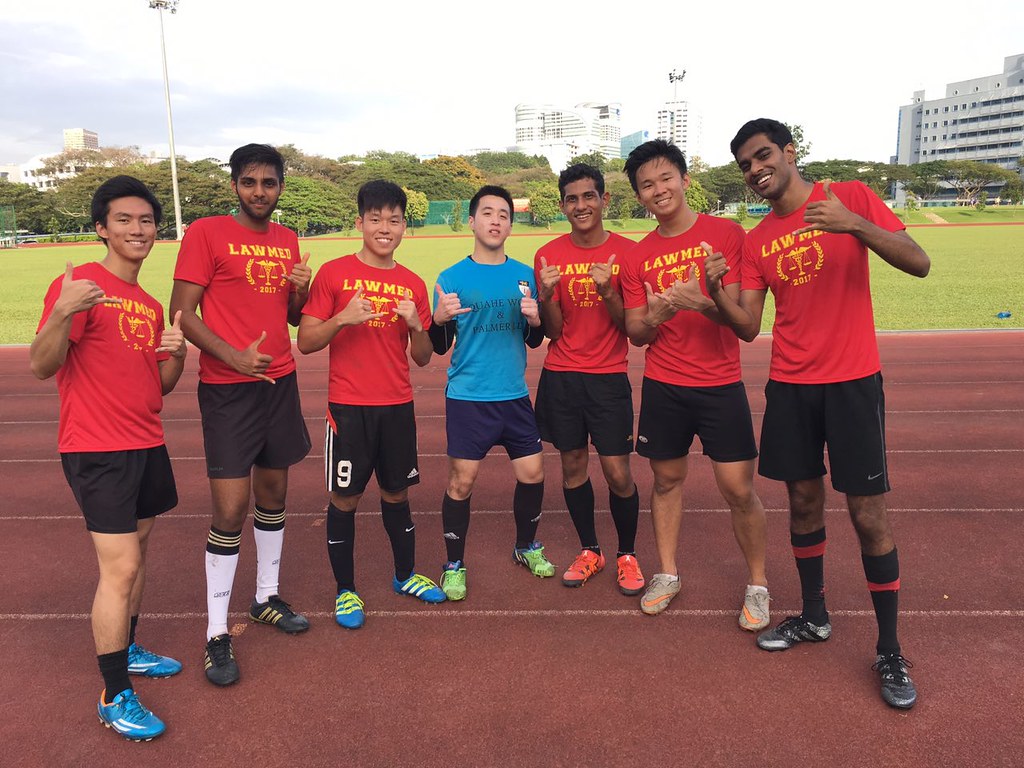