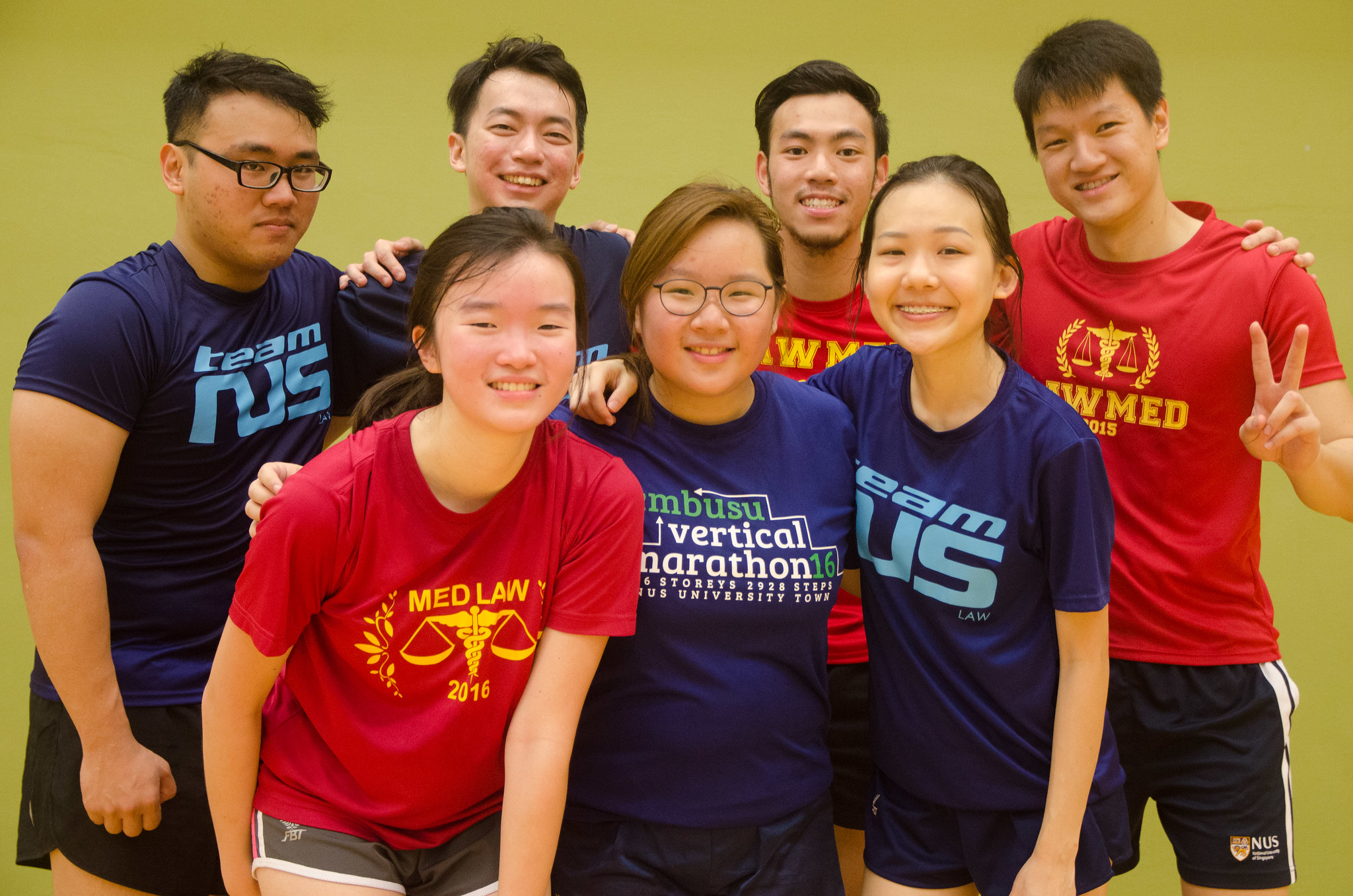 Here’s how Badminton at LawMed 2016 went down:

The first thing Kyle (Y3), the team captain, told me was that about half the proper Law badminton team was gone, and amongst them were our best players. Could team Law overcome this disastrous setback to pull an upset victory?

After a series of warmups, team Law did not seem confident in a strong showing. One member of Law said “I think it will be all over by 10 o’clock”. Team Medicine on the other hand seemed overprepared, going to the expense of remembering to bring shuttles to play with, a luxury which team Law did not think was necessary. Another luxury team Law decided wasn’t necessary to achieve swift victory was fielding enough girls to compete in the Women’s singles events.

The first actual match pitted Elvis (Y3) in the Men’s singles event. It was nothing short of a slugfest. With both sides fielding what seemed to be their best players, the long rallies soon attracted a crowd gathered to spectate the match.

Medicine’s player took an early lead in the first set and pushed his early advantage. Elvis’s impressive ability to travel quickly from the baseline to the net and back made for a thrilling match. Alas, a few of Elvis’s shuttlecocks landed a few inches too deep, and the unmatched agility of the Medicine player allowed Medicine to take the first set. 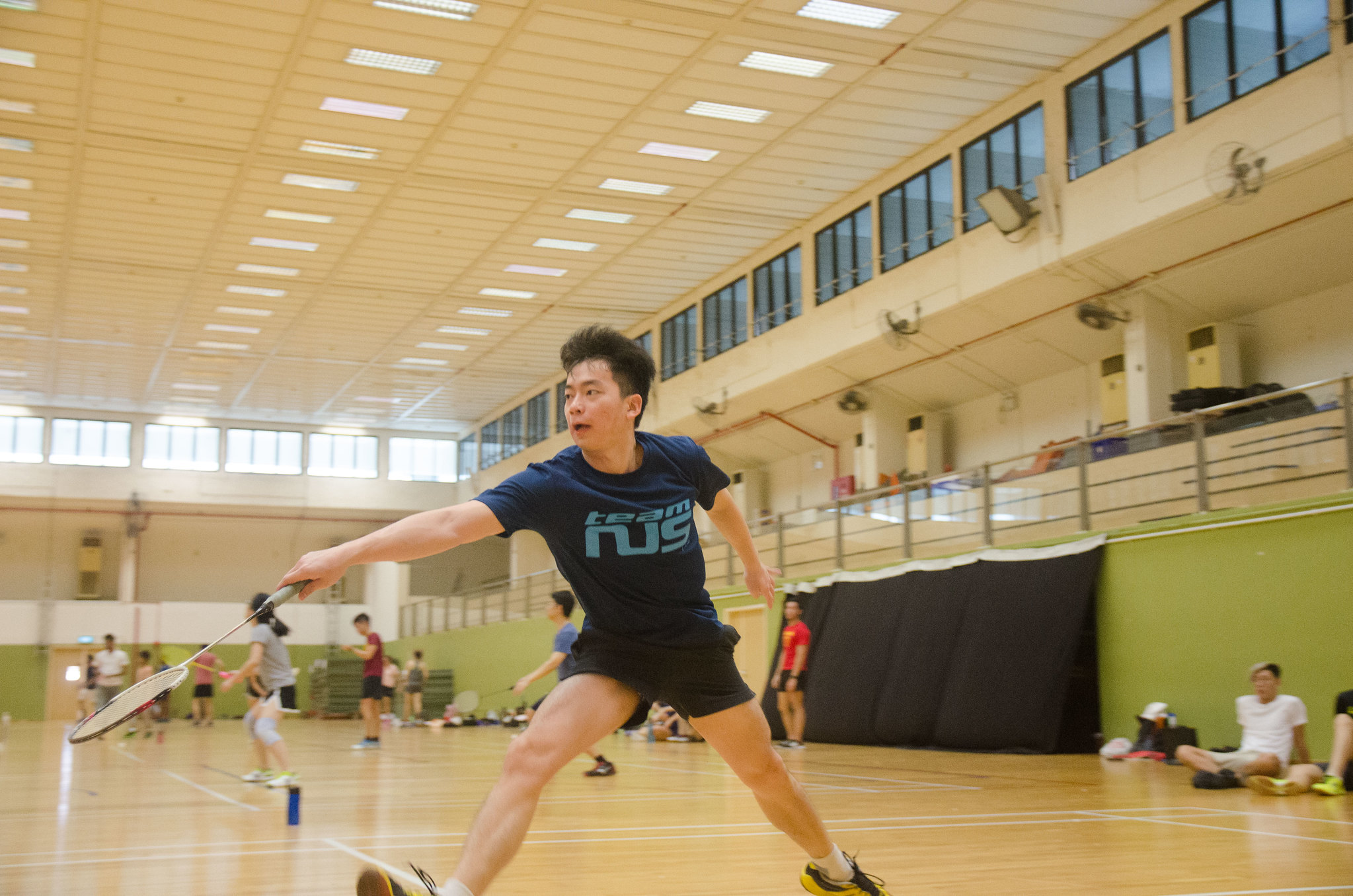 The second set also had Medicine taking a small lead. With Medicine at about 7 points short of match point, Elvis ran off the court, leaving the Medicine crowd confused and asking “What’s the score?”. The crowd of Law supporters were not confused at all, since there had not been a crowd of Law supporters. Elvis returned with a new racket and play resumed. With new racket in hand, hopes were high that the momentum would shift in Elvis’s favour. Unfortunately, Medicine was too tough to beat even for Elvis, so they won the second set and the first real match.

Sometime during the game, I assured Elvis that I had captured a few decent pictures of him, particularly of him jumping. He went on to say “ok I’ll jump more!” 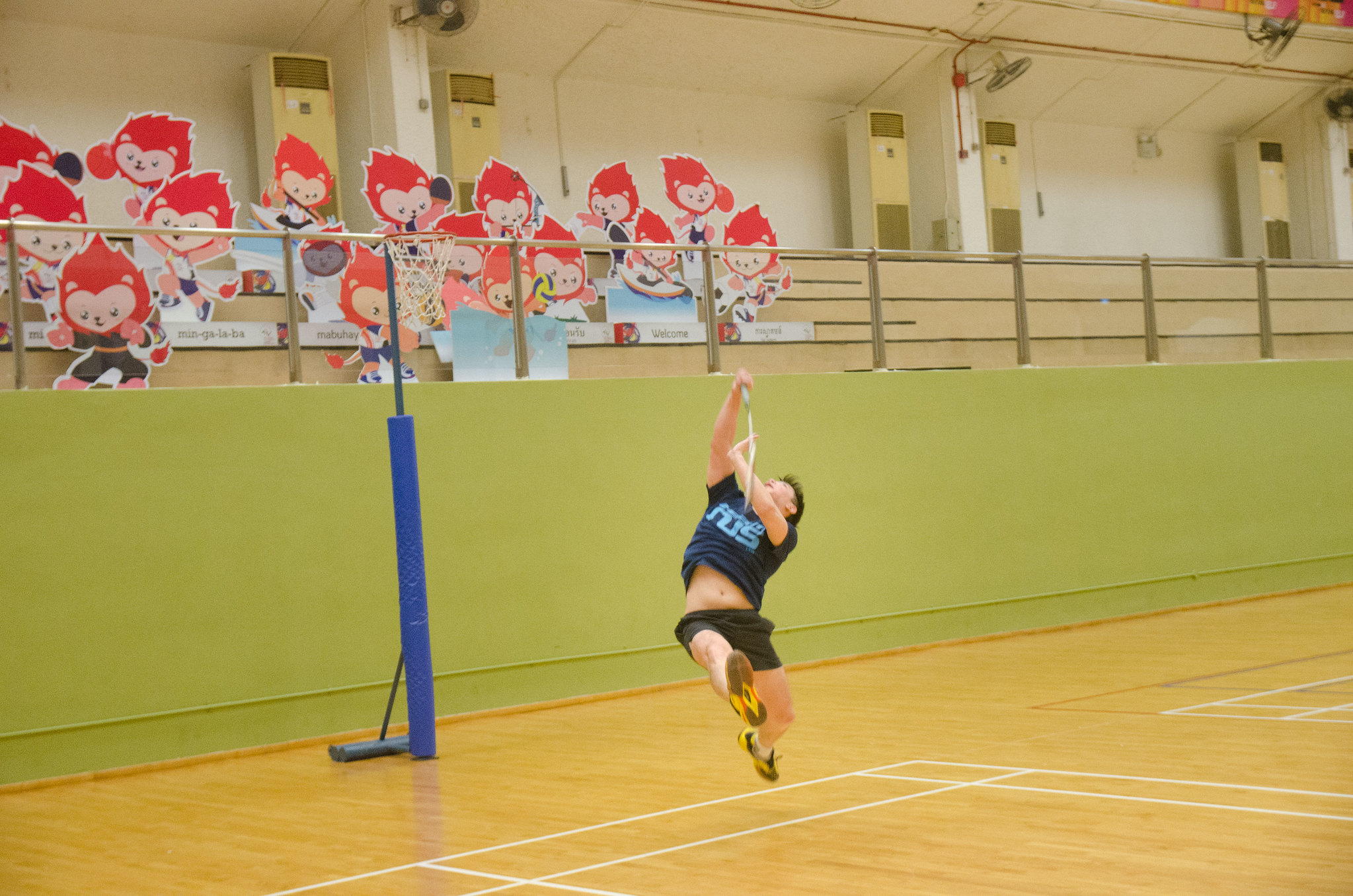 He proceeded to jump more. 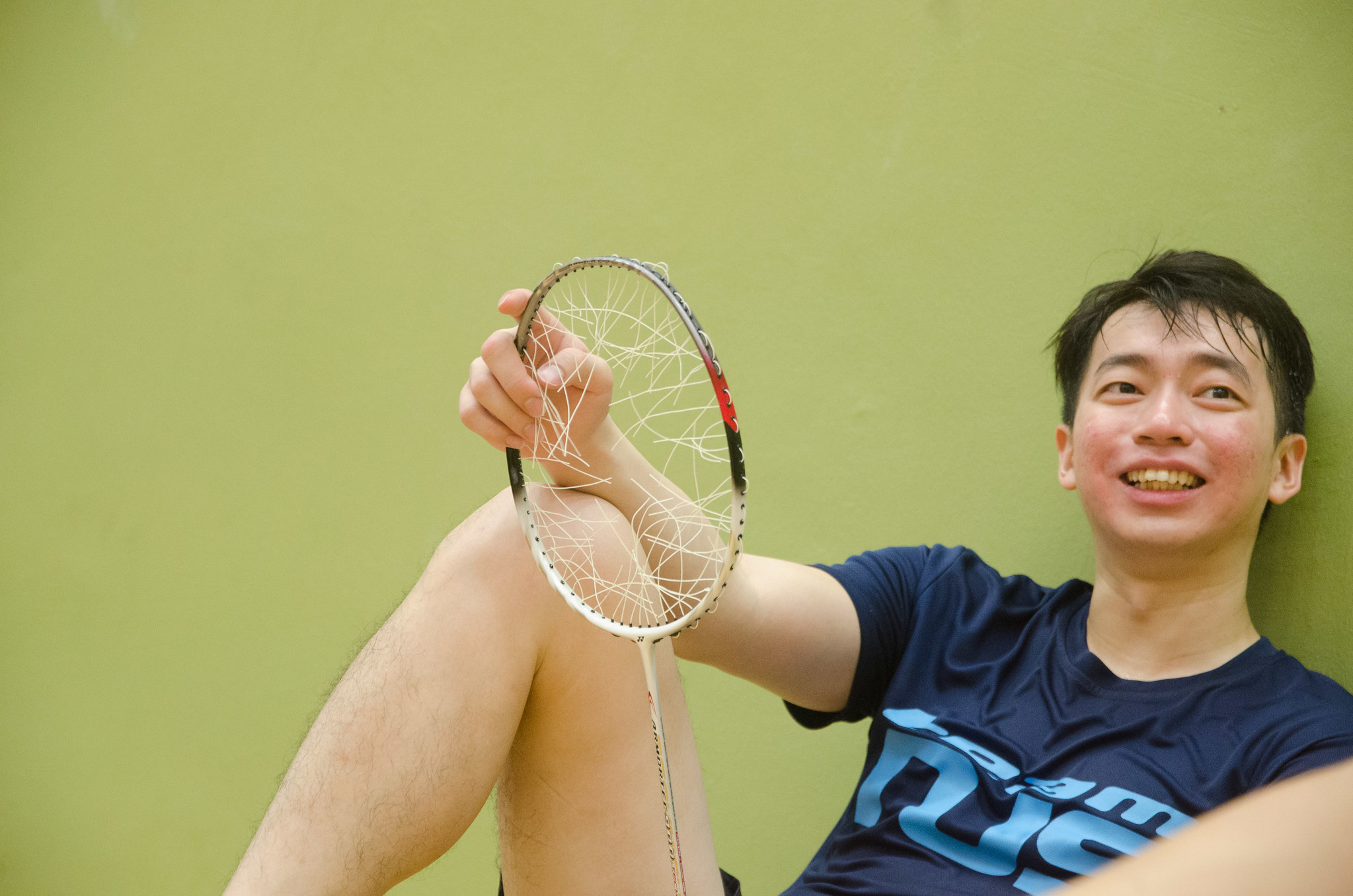 The euphoria of destroying your enemies.

Over at the Mixed Doubles with players Erica (Y2) and Ivan (Y3), team Law was determined to show their stuff. Erica, showing a masterful knowledge of the rules of doubles play she had learnt only half an hour earlier, never forgot where she was supposed to stand. Despite losing an early lead, team Law fought hard, and managed to pick up a few points by mixing in several drop shots to confuse team Medicine. Ivan took charge of the game early, responding well to many of team Medicine’s challenges and going on the offensive. 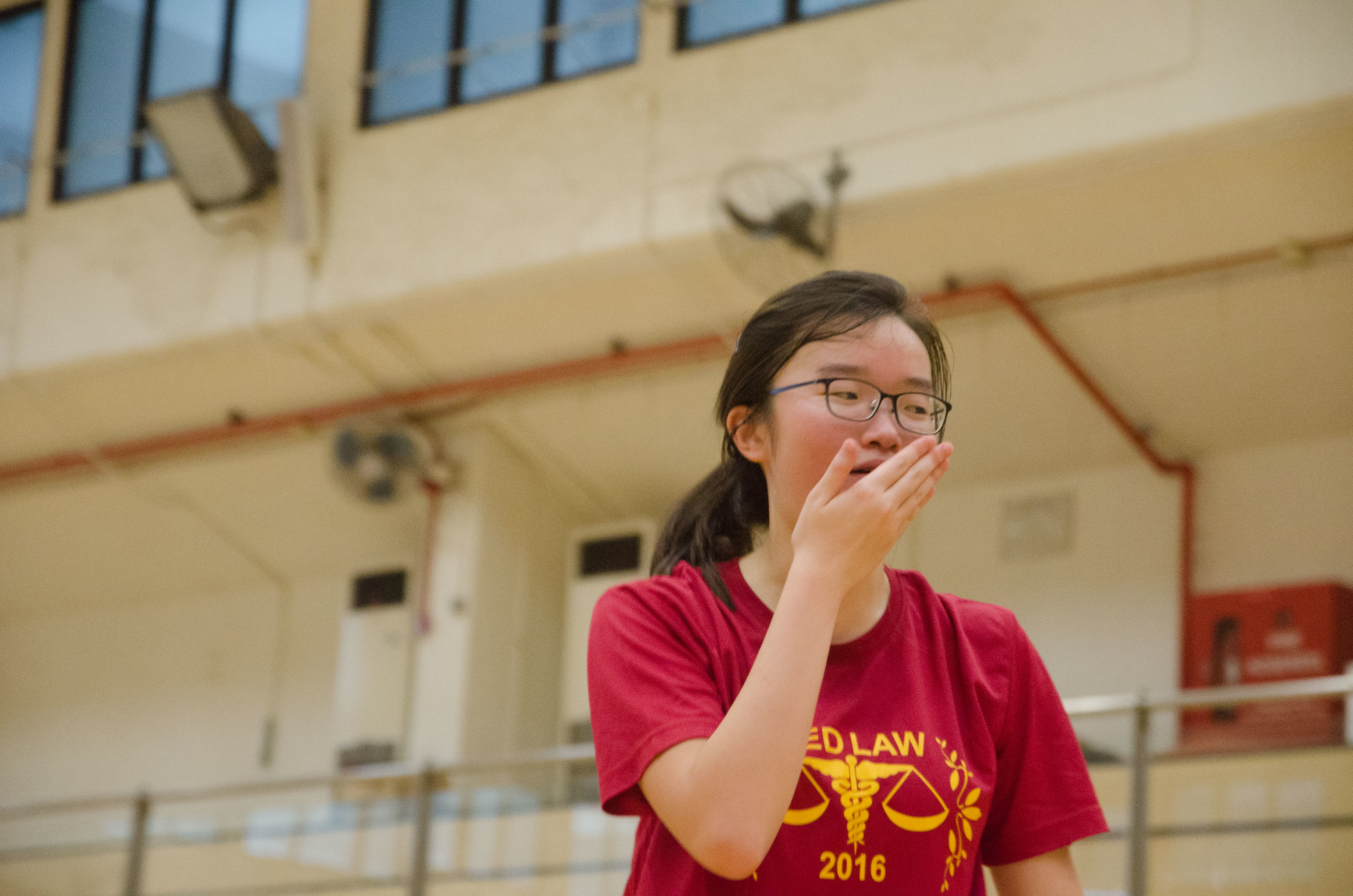 “Ez game ez lyfe” — Erica (she did not actually say that) 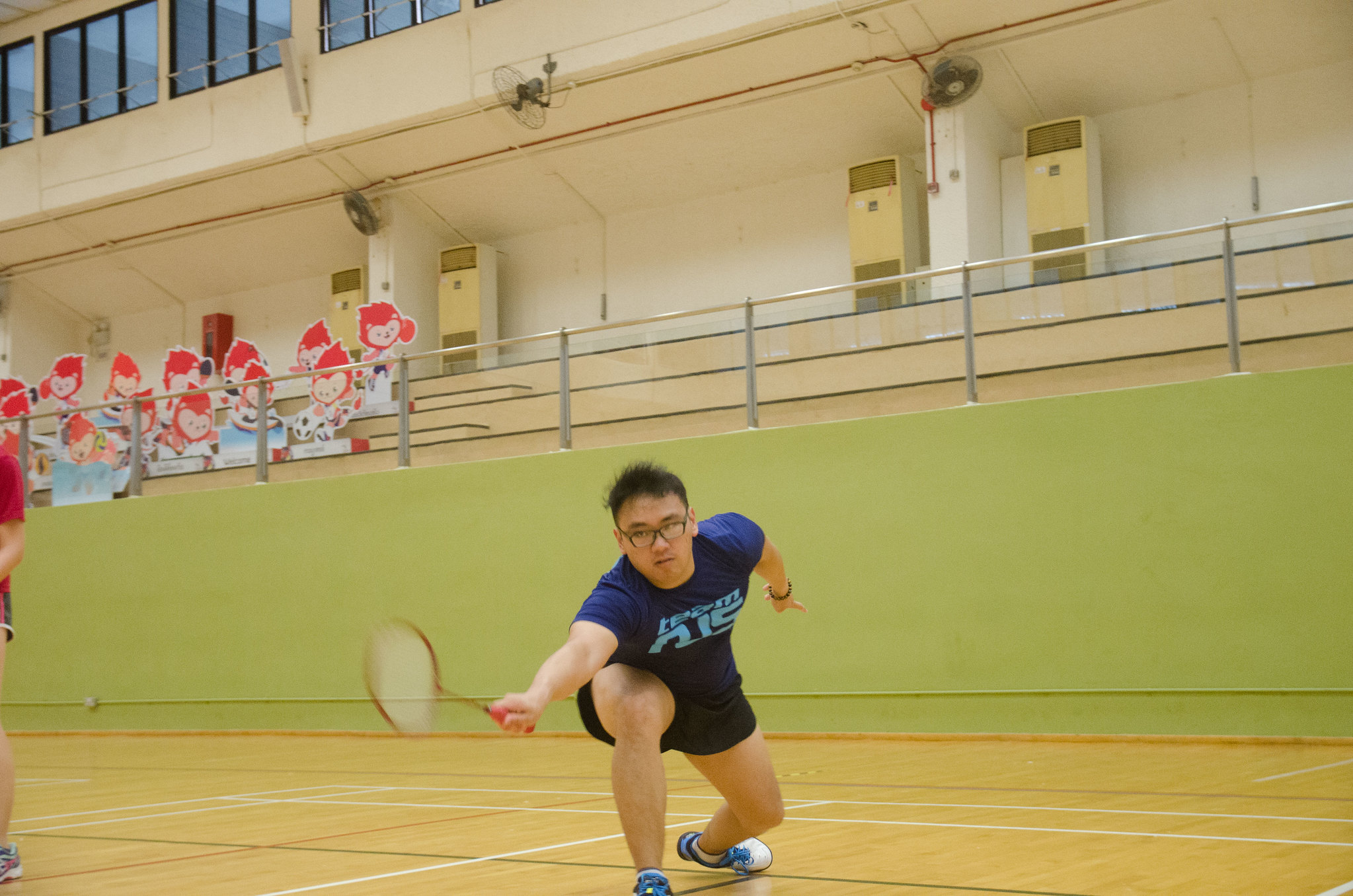 Despite many forceful smashes from Ivan, the precision and speed of team Medicine was too hard to beat. In an upset, the dream team of Ivan and former school badminton player Erica lost one set followed by another. It was a close fight but Medicine’s surgical play could not be stopped.

Law goes down in the third match.

Kyle and Wei Rong played a solid game, earning points with a variety of shots in their arsenal. Kyle also showed remarkable sportsmanship, acknowledging that a point he had scored by nudging the shuttle just over the net was more luck than skill. Despite their height and fashion advantage, the Law men could not bring home a victory for team Law and the fourth match was lost 21-6, 21-7.

At this point, I think Wei Rong was most learned when he said “Scores don’t matter, we lost graciously, and we put up a good fight”. 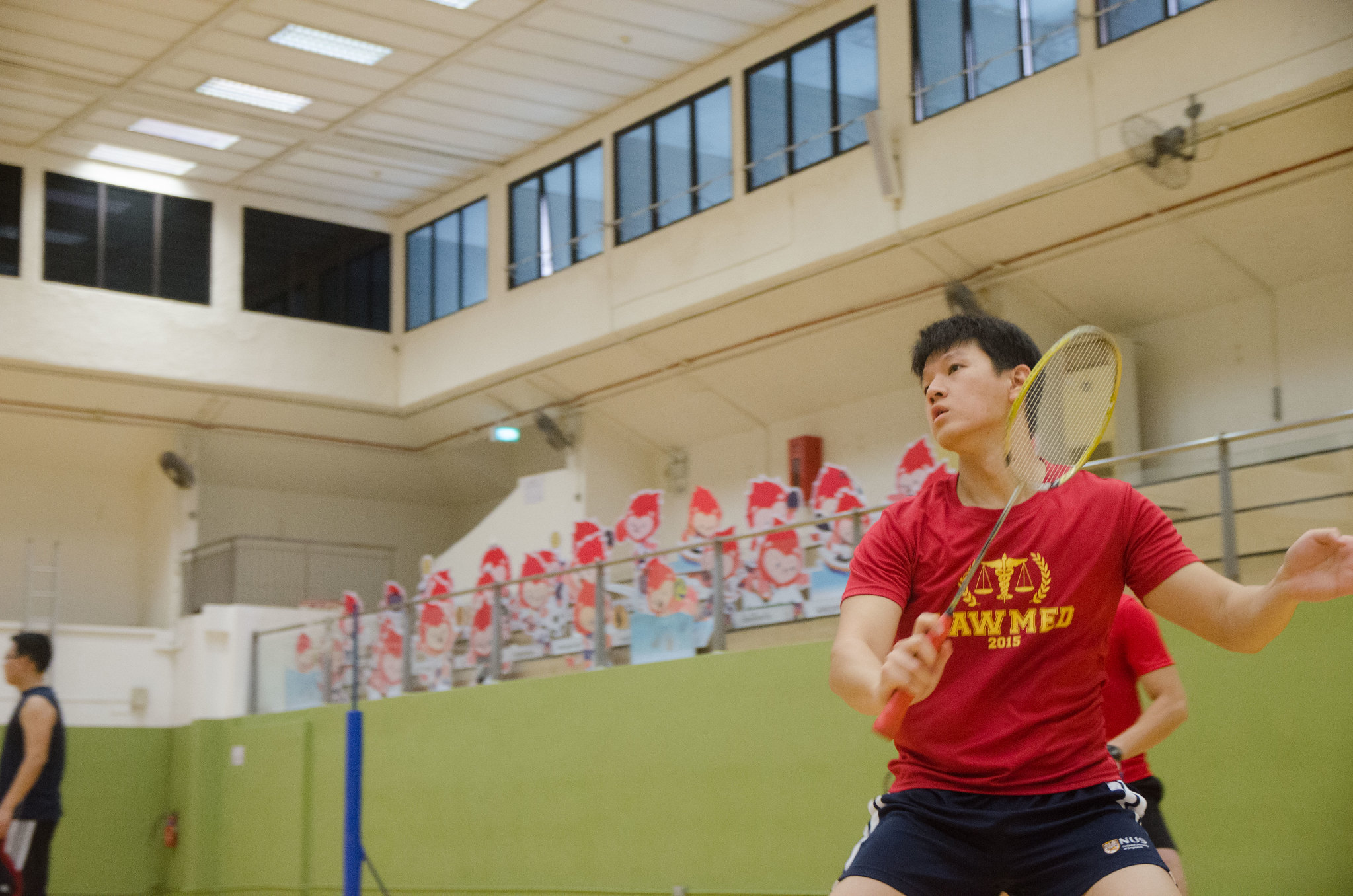 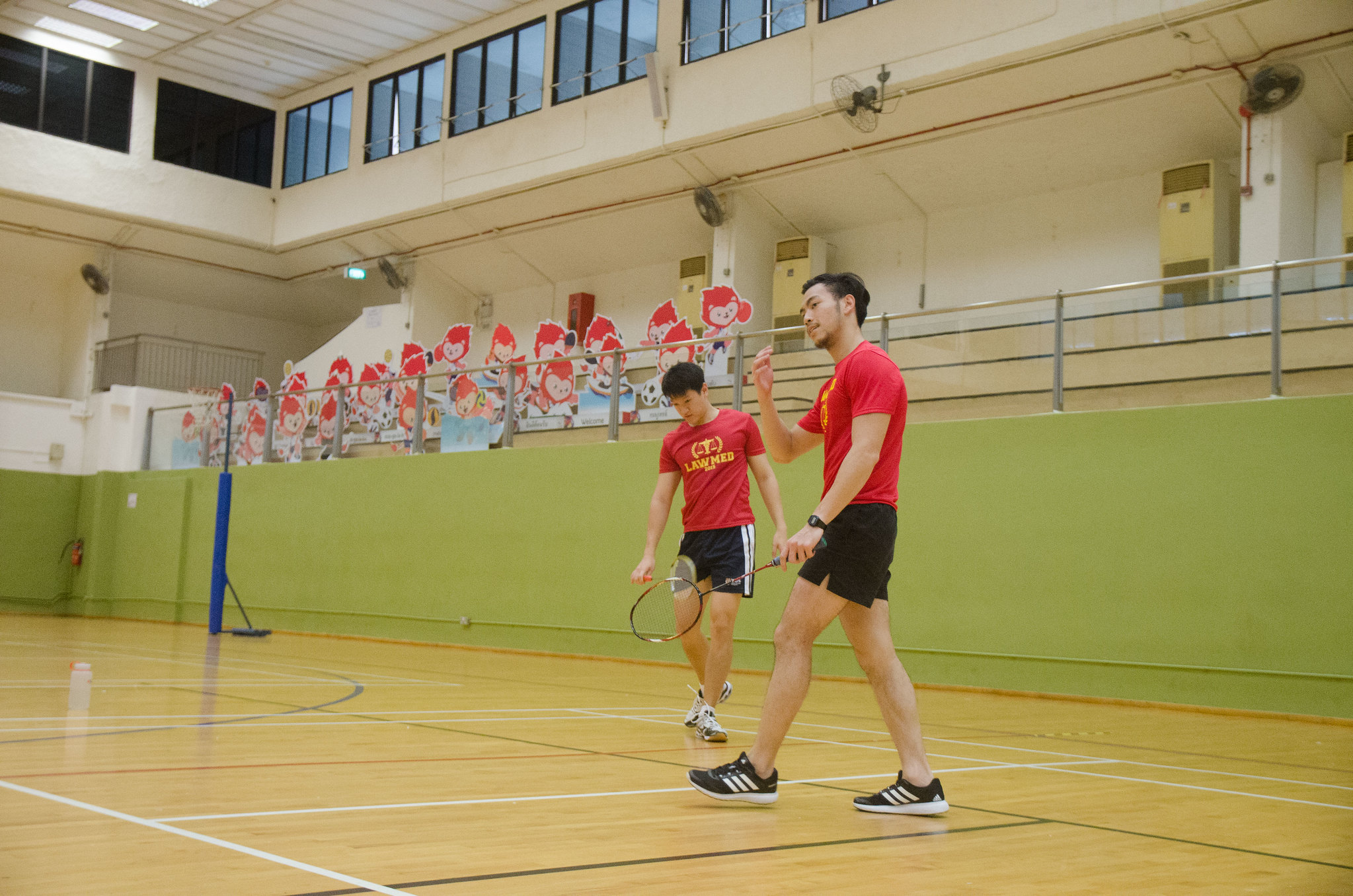 At the women’s doubles, team Law seemed to have been imbued with new life. Trailing just 3 points behind for much of the first set, the freshmen team of Rae Ann and Joelle displayed remarkable teamwork and a robust baseline defence. Looking to claim Law’s first set of the day, the Law women showed impressive teamwork and poise. Unfortunately, momentum shifts quickly in badminton, and eventually Medicine broke ahead and took the first set 21-11. 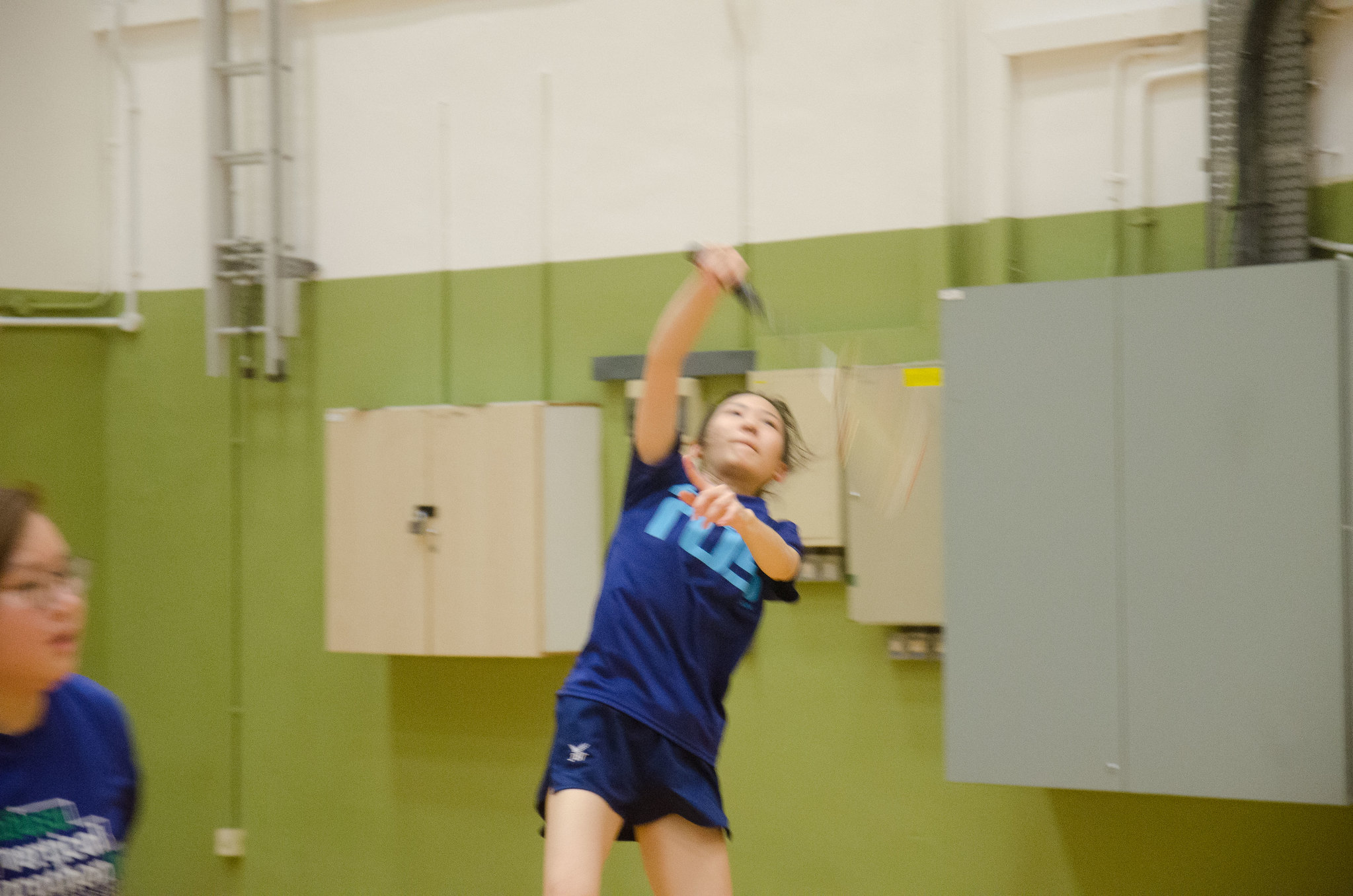 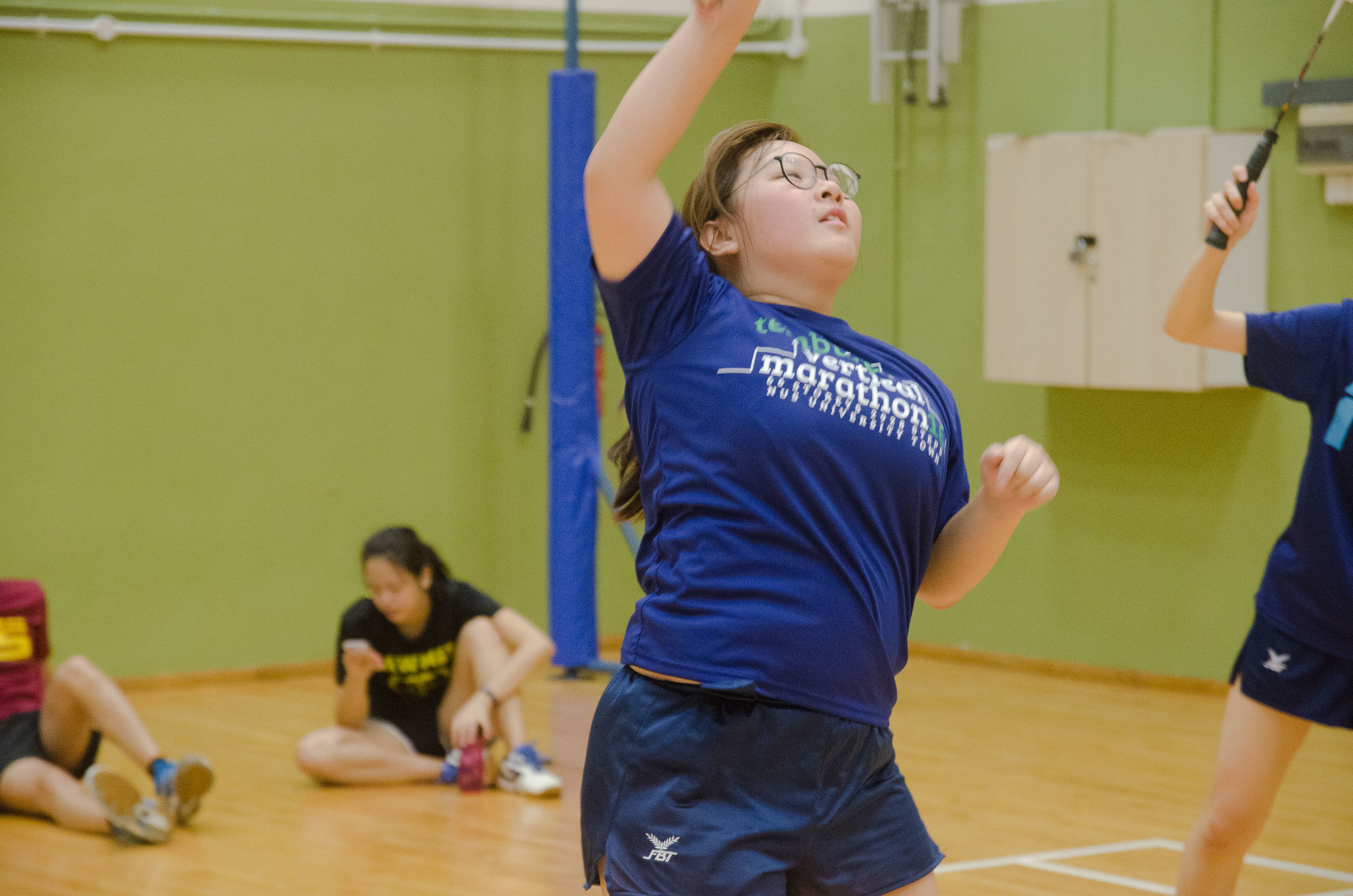 Law and Medicine took a break before commencing on the second set. After an optimistic start with Law and Medicine at 1 point each, Medicine surged ahead by winning 6 or 7 points in a row. Law gained back momentum, narrowing Medicine’s lead in the second set to roughly 5 points. Medicine although being close to victory, faced some difficulty again with Law’s solid play at the baseline. But a series of errors eventually allowed Medicine to taste their fourth and final victory of the day when they won the second set 21-15. It was an impressive showing by the freshmen pair for law, and a great show of sportsmanship all around. 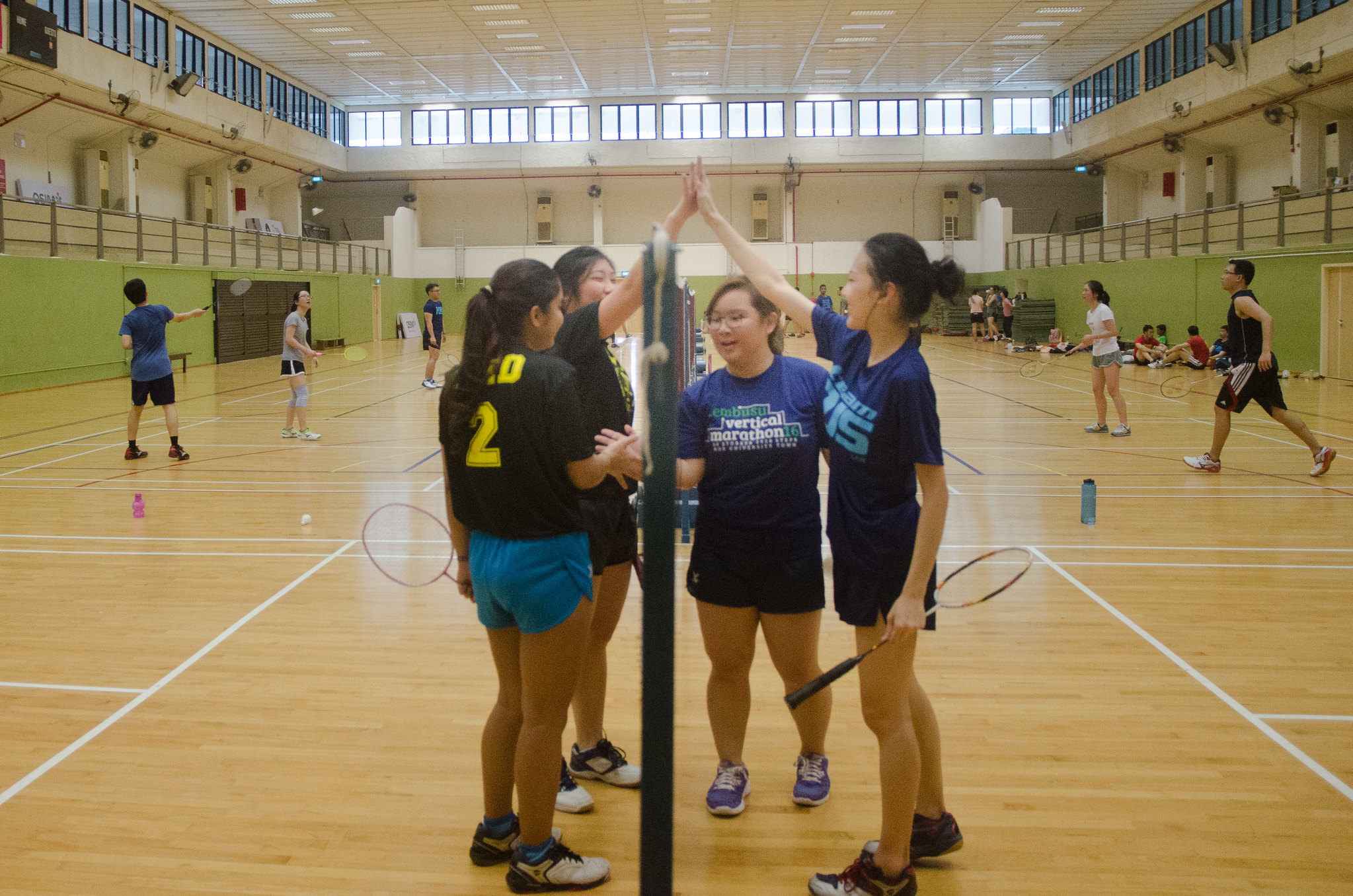 Unfortunately, some of Law’s IVP players could not make it for LawMed due to school duties and medical conditions. They are Andre (Y2), Jen Whee (Y2), Boon Xin (Y3), Boon Tiong (Y4) and Jayden (Y4).