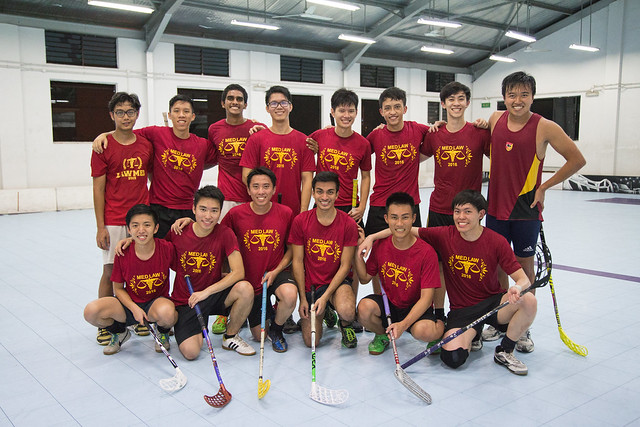 At the unlikely time of 10pm on a Tuesday night, Law school’s Floorball boys were out at Valhall whacking some balls in preparation for their biggest match yet. The hall echoed with the yells of determined players, the sound of running feet and the satisfying plastic clak of sticks to ball as both teams warmed up concurrently. Spectators already knew the game was going to get intense even before it started. 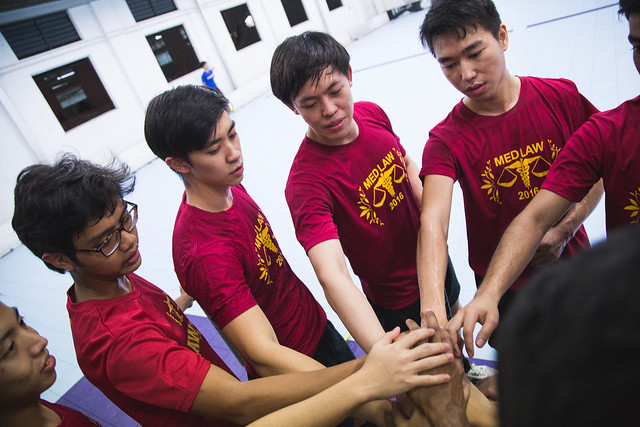 Go Law! Team with their game faces on

With a bunch of “superstar Year 4s” (I quote Team Captain Zaki) in their midst, however, the Law team was anything but intimidated. As the whistle blew, the court turned into a flurry of (violent) motion. 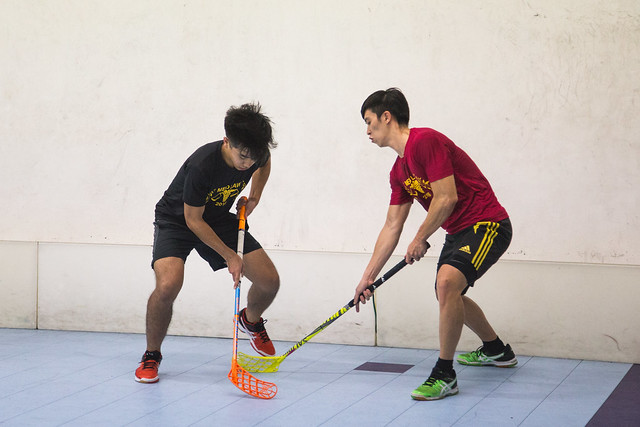 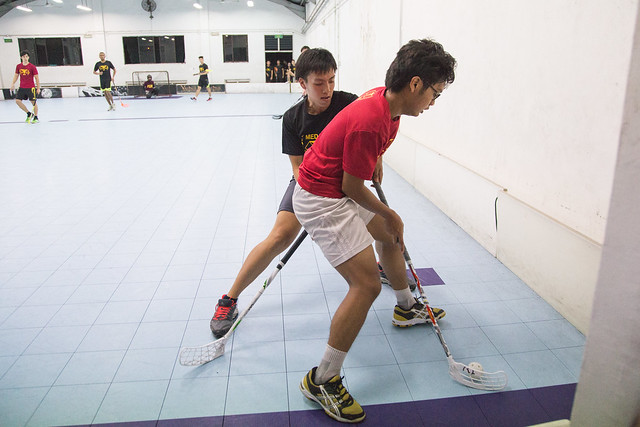 In their fight for possession of the ball, both teams’ players took their fair share of tumbles and sticks to their shins. Our boys got off to a strong start and scored the first goal of the match. Soon after, though, Medicine took the opportunity to even out the score to 1-1. Our boys were undeterred and pulled ahead once again with two consecutive goals, bringing the score to 3-1. 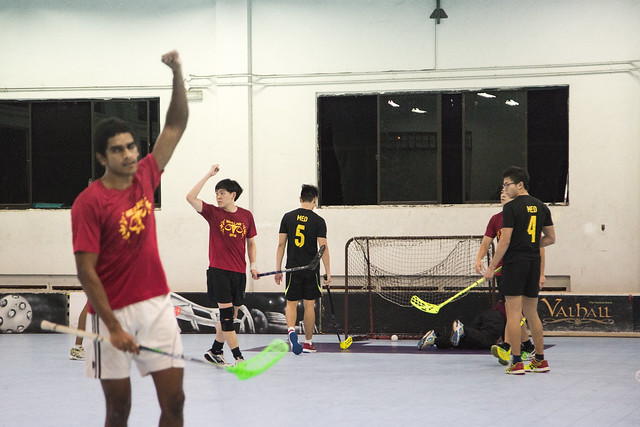 After a short break, our team began with renewed energy. The lead seemed to invigorate the team and within minutes, they had scored another goal, much to the dismay of the Medicine boys. 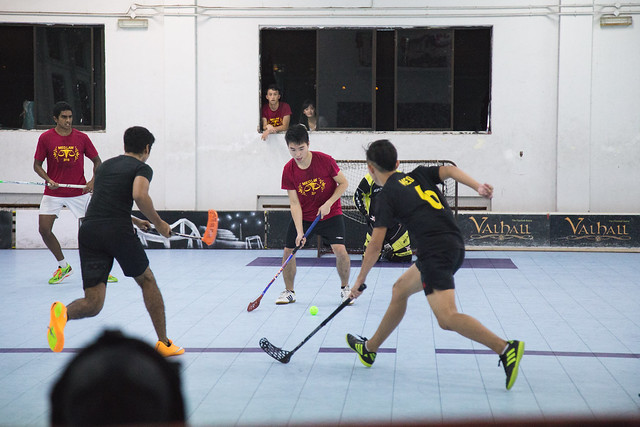 Our boys performed better and better — until with a lead of 5 points, tragedy happened. An accidental upward flick by one of our players sent the ball in an arc towards our own goal. The ball hit goalie See Tow’s shoulder and fell narrowly into the goal, giving an unintended point to our Medicine opponents. NOOOO.

Our Law boys scored two more goals in the third round, bringing the score up to a whopping 9-2. The resting team members started cheering with five seconds to go as the reality that they had won set in.

Law team scoring yet another goal 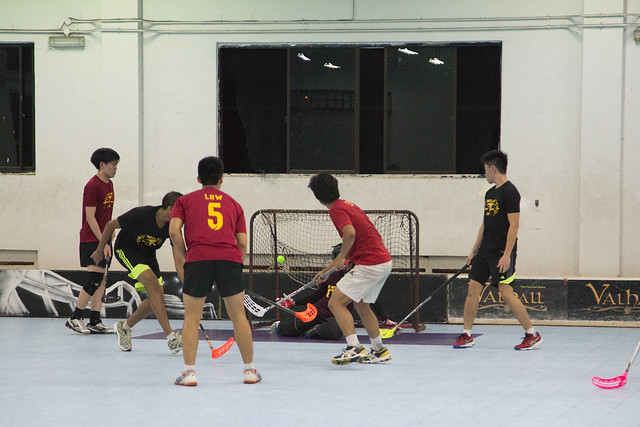 With two seconds left on the clock, Medicine was desparate and still playing hard. A well-aimed flick by one of their players finally sent the ball squarely into our goal, but it was too late. Even the last-minute goal was not enough to save Medicine and the game ended with a deserving victory of 9-3 to Law. 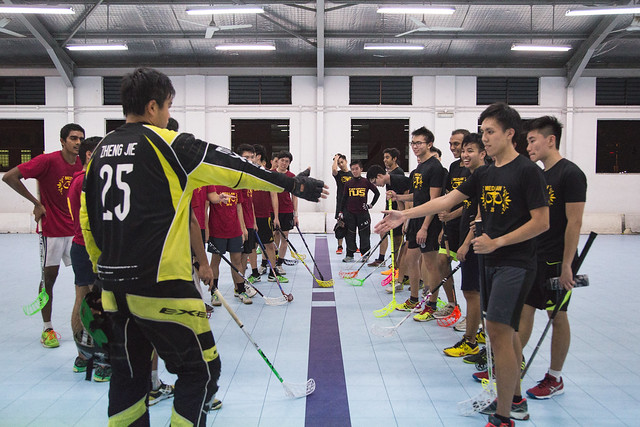 Since our men’s Floorball team has not won LawMed in the past three years, this was a particularly sweet final victory for Year 4s who had been playing every year and finally emerged victorious by a huge margin. We’re very proud of our Floorball boys for their sensational win! 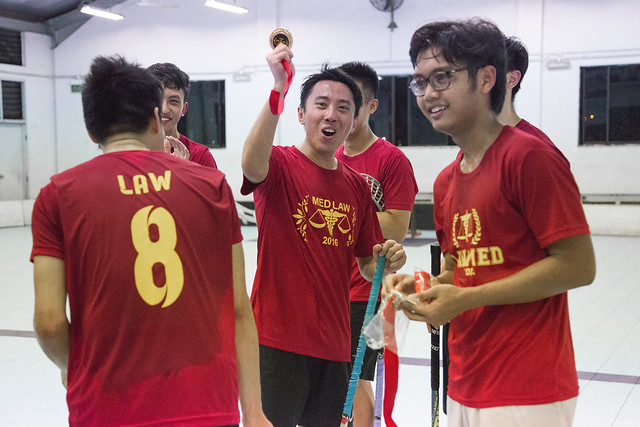 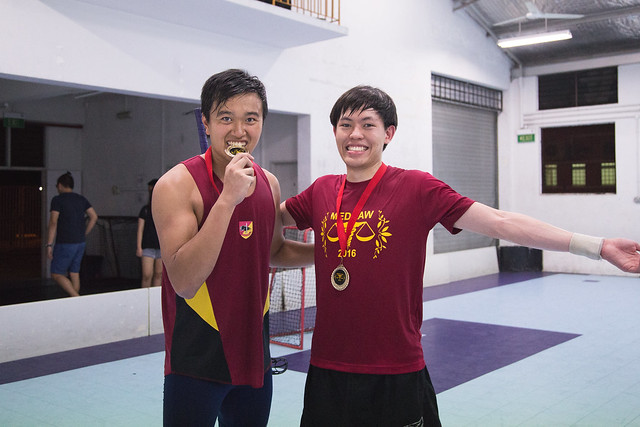 Excited Year 4s who finally got their hands on the LawMed medal. Congrats Law!