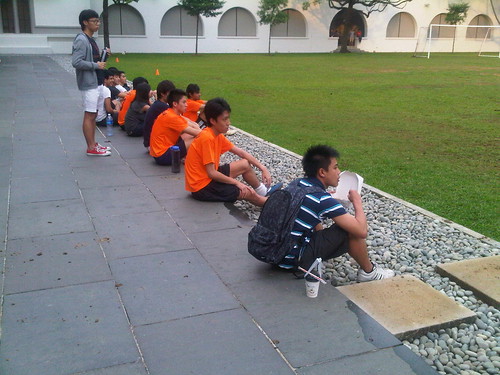 The Year 1 players and supporters engaged by the football

The first game of the justice league brought with it much excitement, especially for the Year 1s as it was our first time playing together as a team. Although there was a hint of rain in the morning, at kick off the weather was perfect. The opening few minutes clearly showed a dire lack of experience on our part as compared to the year 4s, who dominated possession, were much quicker and were generally more accustomed to the flow of the game. Predictably, they went ahead after about 15 minutes due to a defensive mix up in our penalty area. As we attempted to raise our intensity, we came close to conceding more goals as we had to put up with continuous waves of attacks. Just before the half time whistle, our spirits received a much needed boost when I scored an equalizer, making it one all at the break.

The Year 4s, however, were never going to settle for a point and came out much stronger in the second half, putting in four goals to make the score 5-1, a humbling result for us freshman. For the graduating batch it’s an emphatic start to the justice league season and I wouldn’t be surprised if they pulverize other teams in the same manner. As for us it’s back to the drawing board but we can’t wait for our next game as we look to chalk up some points.


Exam Tips For The Win