The Law-Med games culminated in the Law-Med Debate — an explosive showdown of wit, acrimonious jibes and barbed retorts.  Because this is a Law Annual article, the Law-Med games will henceforth be referred to as the Law-Med games instead of the Med-Law games as they would like it to be. This writer hereby declares his unabashed bias for Team Law. Furthermore, while this writer endeavours to be as objective as possible in representing what each speaker said he assumes no responsibility for any reliance whatsoever. The rest of this article reproduces some of the jokes in full and may be inappropriate to some of our readers with more delicate sensibilities.

Things got off to a serious start when Team Med’s first speaker started with a “joke”: “How many years will it take for Law school to win the Law-Med games?” Nobody laughed, or dared to, of course. He then went on to argue that doctors look good (because they can get a complete stranger to disrobe in 5 minutes) and are fitter (because they move around the hospital all day) while lawyers have to “wear loose fitting robes to cover their man boobs”. He asserted that doctors also sound good, have down-to-earth conversations with their patients and are so affable that you would be inclined to share your entire sexual history with him. In closing, he said, “if you have an 80 year old woman thanking you for sticking your finger up her ass, you must be really good!” This octogenarian went on to be a recurring figure throughout the debate and this writer wonders if she is the medical equivalent of the Law’s reasonable man on the clapham omnibus.

Joshua was up next and as he mounted the rostrum, he remarked how things in Med school seem to go limp (the mic stand failed to stay erect) and how doctors fail to clean up after they’re done (writing was left on the white board from the previous lecture). Joshua began by reminding Team Med that the burden of proof of the motion required Team Med to show that doctors are better spouses than lawyers and Team Law just has to prove that doctors are not better spouses. But in preparing, Team Law realized that they could not just do that because they were so much better spouses than doctors! Josh then rebutted Team Med’s point by arguing that doctors put their fingers in all sorts of nasty places and lawyers are compelled to look good while doctors just wear scrubs and crocs.

Joshua’s first argument was that lawyers make better spouses because they are better at sex, likening the Pre-Trial Process to foreplay: first there is discovery, you try out different positions, massage the briefs, and find the most penetrative angle before you reach an explosive climax in court. Doctors, on the other hand, simply wash and scrub before getting dirty. Joshua then argued that a lawyer’s best tool is his mouth and tongue while doctors’ tools seem to be getting smaller and smaller these days.

Gerald came back at him arguing that lawyers make better companions because they are better at intercourse – written and oral; are more accommodating (we even play with friends from overseas) and are generally more fun (medical students become housemen while law students get called to the Bar). His closing statement: “Marry a doctor if you want a prick but marry a lawyer if you want the supreme cock”.

Med 3 then came up to reiterate her team’s points (OK, this writer concedes that he did not take any notes here because, frankly, there wasn’t much to at this point anyway).

In her closing speech, Heidi sought to rebut the misconception that lawyers are a litigious bunch as Team Med sought to put it to us. She introduced the concept of Alternative Dispute Resolution explaining how in International Arbitration, lawyers cannot choose not to deal with a case just because the law is foreign to them. Just like how the bak chor mee stall uses Swedish meatballs instead of normal Chinese ones, lawyers will accommodate because Swedish meatballs are meatballs too! And in fact, the lawyers might even appreciate it better because Swedish meatballs are bigger and tastier.

Furthermore, lawyers do pro bono work and in NUS Law, our pro bono society is filled with “pro boners raging hard in their convictions until they reach the climax of justice”. And because pro bono work is time taken out of a lawyer’s billable hours, the loss is greater to a lawyer because lawyers are paid more!

Throughout the debate, rapturous laughter and applause oscillated between each half of the LT (which was split down the center between law and med) while the other side glowered in awkward silence as the Law/Med jokes fell flat on them. As the debate drew to a close, a Year 1 remarked that coming for the debate was worth his while despite the fact that there was a LAWR assignment due the next day.

Even though we lost the debate, much to the consternation of Team Law, our indomitable sense of pride and camaraderie never wavered. The experience of uniting together as a faculty, supporting our fellow friends and laughing at their lame law jokes as they exchange verbal riposte and parries to humiliate Team Med was unparalleled — LAWR could certainly wait. This year’s debaters put up a superlative effort that next year’s team will be hard pressed to match. 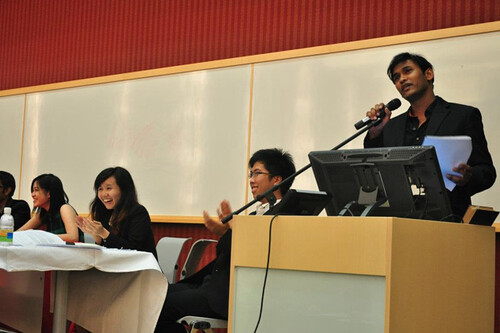 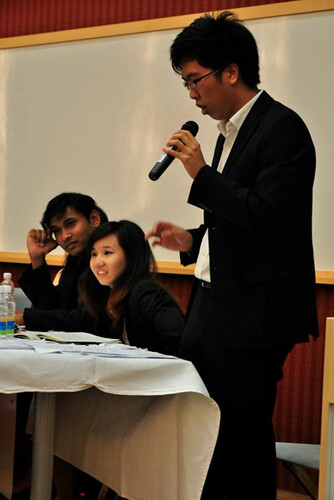 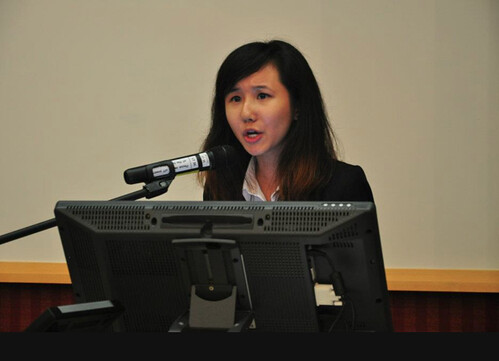 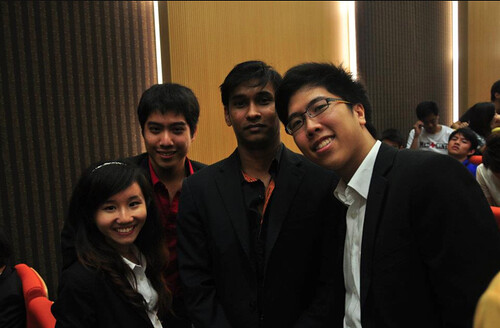 LawMed debate always exists on its own fragile equilibrium. At the forefront of things there is a case to pursue and on the other side, who could possibly give up this grand opportunity to make fun of Medicine? Prep was definitely hard — be serious and bore everyone to death? Poke at Medicine and face the ramifications? What if our jokes were flaccid? We knew we wanted to have a good time but it was A LOT harder to make an entire room laugh for three consecutive 8 minute speeches than it sounds.

Good thing I had a fantastic team. Once the boys overcame their fears of not lasting 8 minutes, we were on a roll. All someone had to do was whisper “oral submissions” and we would practically fall out of our chairs.

Just before the debate, we were all called to The Bar. And then we got lost around Kent Ridge and strolled in late, and Medicine must have been upset because they clearly had the nerve to show it.

Once the oral action started, we were unstoppable. After all, we firmly believed we had already won the first argument on attractiveness just by turning up.

We didn’t win in the end, which is a complete bummer, but that’s not important. We had a point to prove and we did, and most importantly the audience had fun (we hope!).

If I had a chance to do it all over again, I wouldn’t trade this team for the world — all my love to the boys: Josh and Gerald, and everyone who prepped with us: David, Matthew Reuben (just decide on one, damnit), Adriel, and The Great Sadhana Rai.

And much thanks too, Law Club (especially Jiazheng), for dealing with all the administrative matters! And everyone who came down, shooed Medicine off their seats, crowded the steps, and laughed at all our lame jokes — THANK YOU for your support. It has been an honour and pleasure to debate for Law School, you guys are truly a wonderful friends to have and to hold.