He was a boy who dreamed for himself a life of the movies. He spent the best moments of his childhood in front of the silver screen, and he wanted so badly for that same movie magic in his life.

And Guy got what he wished for.

His life became a cross between Horrible Bosses (without a very excitable Jennifer Aniston), Devil Wears Prada (without the happy ending) and even some Casino Royale thrown in for good measure (with as much gore as the stage would allow). Things took a change for the movies when Guy (George Young) won a coveted job as the personal assistant to a much revered (but deeply hated) movie mogul, Buddy Ackerman (Adrian Pang). Buddy is the mean, swearing, two-faced, lying, claims-credit-for-your-work-then-spits-coffee-in-your-face kind of horrible boss — wait, aren’t all bosses … 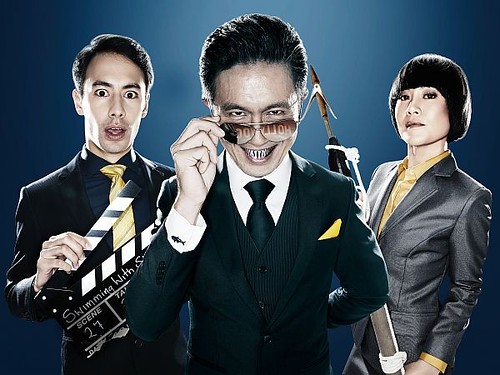 The play begins with a quirky video of Adrian Pang speaking from backstage, introducing the play, telling the audience to switch their phones off or the actors will single them out halfway through the play, and also highlighting that there will be “approximately 10 sh*ts and 37 f***s in the first 20 minutes alone”. The show certainly lived up to this promise and the “f-bombs” were littered across the stage — it was nice that they meant so much more by the second half, when things really started get serious (and intense). 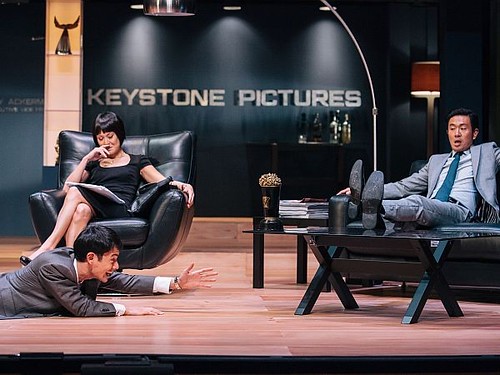 George Young puts on a decent performance in his stage debut as the fumbling, wide-eyed newbie who is ever so eager to please his new boss. While some may quip about his slouchiness (admittedly, he had drooping shoulders for a good part of the time before the intermission), this added to the power dynamic where he was the smallest fish in the tank (or perhaps he was simply just too tall and needed to get some eye contact with the other actors). One can easily appreciate a transformation in his posture and attitude, albeit a little abruptly, as Guy begins to earn some credit from his boss and brownie points with his love interest — strong-willed, indie producer, Dawn Lockhart (Janice Koh). Or so he thought. 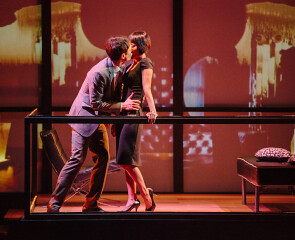 Adrian Pang and Janice Koh delivered strong performances and carried the tensions and emotions of the characters well. However, it was a little strange to see George Young and Janice Koh locking lips on stage (even though we’ve seen them in a little television romance on The Pupil). It is not so much the age gap (Janice was looking good in her pyjamas, by the way), but some lack of chemistry that becomes more apparent on stage.

Credit must be given to Janice for making the most out of the emotional scenes, leaving George with the difficult task of matching up. However, Dawn’s supposed sex-for-getting-ahead-in-the-movie-business did not quite seem believable — perhaps it was the script, perhaps it was Janice playing her character too positively, or perhaps it was just me. Having coolly rejected the advances of one of the most powerful men in show business, Dawn instead fell in love with the idealistic new kid on the block with some actual writing talent. She seemed to have had too much integrity as an indie producer to be guilty of maliciously getting ahead with her charms. The result is that instead of a three way power struggle, as promised in the production posters and programme booklet, the tension was most evident between the personal assistant and his mean boss. Without giving too much away, this also made the ending rather peculiar. 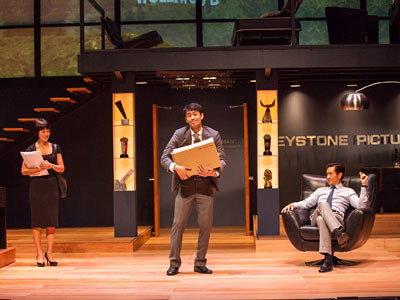 The swanky set designed by Ian Bailie was a sleek, modern duplex office set against the splendour of the Hollywood hills. It was, however, disappointing that, sitting fourth row from the stage, the railing to the second storey blocked from view some of the action and most of the facial expressions when the actors were up on the loft that was Buddy Ackerman’s office. And let’s just say there was quite a lot of action up there, courtesy of Buddy’s persistent escort, Mitzy.

The projections between set changes were a nice touch, featuring clips from “The Graduate” and “The Fight Club”, among others, that either echoed elements from the previous scene or set the stage for the next scene.

Once again, Pangdemonium brings a relevant, accessible production to the Drama Centre stage. Swimming with Sharks is a play that anyone who has worked or interned in an office can relate, never mind that it was set amidst the glamour and gore of Hollywood. George Young mentions to insing.com that his experience as a lawyer (he’s a qualified lawyer in England and Wales) made Guy’s character one that he could easily relate to. Let’s hope things are different around here.

I leave you with a line from the play that seems to be particularly apt for those of us (me included) who spend too much time at the library – “In the constant rat-race of life, don’t ever forget to unwind”.

Swimming with Sharks runs from 20th September to 7th October 2012 at the Drama Centre Theatre. Tickets on sale at SISTIC.

The Arts & Culture Column is made possible with the help of Samuel Seow Law Corporation.
Share this post
The link has been copied! 
JUSTONEPARTY - Celebrating One Year of Justified