The night ended on a high (albeit an alcohol-induced one), with titillating musical performances by our very own law school students, a free-flow of beer, and wonderful company! In contrast, the events leading up to the opening ceremony were much less enjoyable, and that is where my experience begins.

Owing to a wedding that took place the previous weekend, the field had not felt the gentle graze of studded-boots against her grassy bosom for close to three weeks. Rather, yellow rubber PCK boots trampled on her modesty, and oppressed her with metal platforms and air-con generations. Now, it was left in an absolutely horrendous condition and work needed to be to done before the soccer match — the field had to be painted, debris removed, holes patched up etc.

With an hour till match kick-off, it was make or break, and it was a pretty comical sight — seeing a group of law students brainstorming on how to paint straight lines, laying out raffia string to demarcate the borders, and ending up painting the lines crooked anyhow. Additionally, an intense debate took place over whether pebbles should be used to fill the drill-holes left in the ground.

I am usually a bundle of nerves before soccer matches but there wasn’t any time for nerves today. Soon as we were done painting the field, it was right about time for kick-off and supporters began streaming in from all directions (at least in my mind they did). Personally speaking, it is always (emphasis added) a joy to have friends and schoolmates rooting for you, cheering you on and providing you with the motivation to keep on running regardless of how fatigued you may be. And with the backing of the audience, the NUS law soccer team out-played our rivals from SMU law, despite them putting up a tough fight, and took home the Lawrence Quahe & Woo cup!

All in all the opening ceremony for the Lawrence Quahe & Woo cup was an evening filled with friendship and laughter, music and soccer. What better way to kick-start your recess week than with friends, united for a common purpose — to drink beer and eat free food. Just ask your friends who were there!

Lured by the prospect of an afternoon of good football, over a hundred NUS and SMU faculty staff and students descended upon the Upper Quad on Friday afternoon for the Opening Ceremony of the Lawrence Quahe & Woo (LQW) Law League showcasing an All-Star match between NUS Law and SMU Law.

The conditions of the pitch were somewhat abysmal, having visibly taken a toll from the 3 weeks of preparations for a wedding ceremony held just 2 days before the Opening Ceremony. But no matter: the sun was out and the weather was great for an afternoon of football and the prospect of free flow Brewerkz beer more than made up for the poor pitch conditions. Also, being the official curtain-raiser for the inaugural LQW league and featuring the All-Star teams from the two rival Law schools in Singapore, excitement levels were naturally high and players and supporters alike were rearing for a good match.

They were not to be disappointed; from the kick-off, our NUS team attacked ferociously, pinning the less-experienced SMU side to their penalty box for extended periods of time throughout the match. Tackles, near-misses and goals were all loudly cheered by the boisterous crowd, with a group of guys from NUS being particularly animated and loud. Through the course of the match, the quality of the NUS side had shown through, and despite a tough fight put up by the SMU team, by the end of the afternoon the score-line read 8-0 to NUS.

As soon as the final whistle went off, what little animosity and rivalry on and off the pitch quickly turned into friendly banter between the players and supporters present as the buffet dinner and beer stations were declared open by our gracious sponsors from LQW. To top off an awesome evening, performers from SMU and NUS took turns to perform soulful tunes for those present as beer and music flowed till late on the Upper Quad.

Those of us present enjoyed ourselves greatly through the LQW Law League Opening Ceremony and I hope that in time to come, even more students and faculty staff can take time off their busy schedules to have a great time at future events!

I walked down the corridor towards the doors that led to the Upper Quad. All day long, I had been preparing myself for this. For this one moment, a moment I knew, I would never forget.  Walking past SR 2-2, I could hear the roar of the crowd. This was it. My moment, my time to… support our soccer boys!!!

Friday was the opening ceremony for the Law football league and boy did we open with a bang! An 8-0 thrashing of SMU!!! Goals came from all over the pitch. The soccer boys were truly artists with the field, their canvas. With each masterful stroke of the ball, they split the SMU defence open. Their passes weaved together, forming a patchwork so beautiful, it would serve as a grave injustice for me to begin to describe it. The goals took your breath away. Strength, finesse, accuracy and skill were truly on display.

At the end of the 3rd half (yes!! you read it right! Their play was so awesome that we asked for an additional half), our boys gathered around to thank the crowd for their support. We in turn thanked the brave warriors for their heroic efforts.

With so much action already, the faint hearted might have resigned themselves to their books, but not us! Not us Law students. We wanted more and more was given!!

With the end of the soccer match, food, music and fun awaited us. I’ve always considered myself a food critic and yet I was bowled over by the sheer splendor of the food. Truly, one could not have asked for more. And yet, more was to come.

The live music that night was truly spectacular. Under the stars (satellites?), our muses serenaded us with songs about love, hope and faith. As they sang, we too did our part by singing along (although some of us should have just listened). It was truly a sight to behold. 2 law schools, singing as one, united by friendship!

May such events continue to provide joy and happiness for all of us!!

PS: For all those of you who are cursing the decision to stay in the library, fear not! There will be lots of other events that you guys can come down and have fun at!! 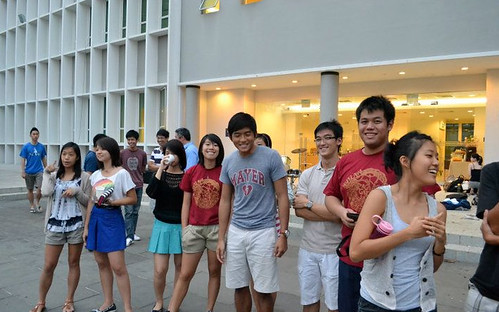 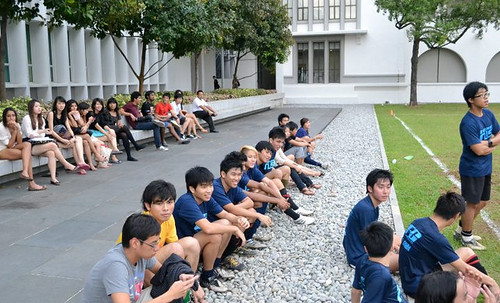 Lined up and ready to cheer! 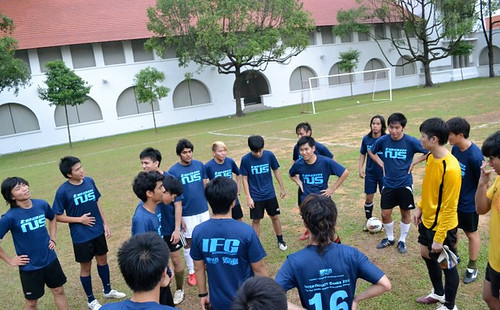 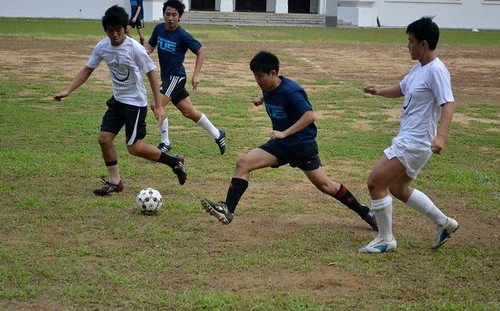 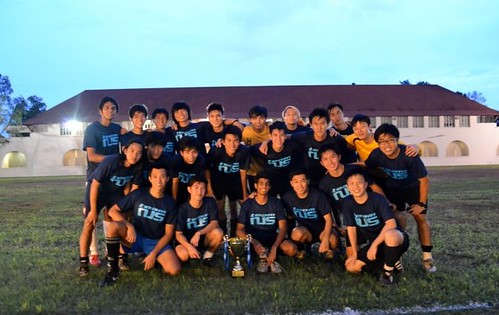