In the first of Justified’s feature on sub-clubs, we have a chat with LSIRC, one of the most popular sub-clubs in school, and get to know a little more about it and the people behind it.

Starting off with the basics, what exactly is LSIRC?

It stands for the Law Students’ International Relations Committee, and was set up primarily to facilitate international relations amongst law schools and its students from different countries. It is a sub-club under law club and it currently has 148 members. Basically the structure consists of ad-hoc, internal and external events.

The internal events include the Semester 1 Mid-Autumn Festival collaboration with Law Club, the Childrens’ Day fundraising for the Childrens’ Cancer Foundation and events for exchange/LLM students, etc. These events are not just tradition, but aim to achieve LSIRC’s secondary goal of facilitating and encouraging cohesion within members and batch mates, making usually mundane school life more vibrant.

LSIRC is also behind  the exchange buddy program, where an exchange buddy fetches an incoming exchange student from the airport the moment they arrive in Singapore. Beyond that basic duty, it really varies and depends on the personalities of each caretaker.

What is the structure of the club?

Instead of separate committees, this year, the Exco decided to adopt an approach in which they let every member have a chance to be a part of all the events. The EXCO will inform the members about the different upcoming events which they can sign up for accordingly, and each event has a few committees. For example, the Children’s Day committee included the sub-committees of publicity, food, sales, games, photo booth doubled with decorations, and busking.

How you do you qualify for admission?

According to the EXCO, the qualities their committee generally looks for include an amicable personality, willingness to commit, and decent character. These are not conclusive and are only general benchmarks. The committee had a rough idea of the number of new members they wanted to take in to ensure that every member who entered LSIRC would have ample opportunities to be involved in the few major events. This gauge varies every year depending on the committee itself. Freshies consist of more than half of the sub-club, but the committee still welcomes applications from upper year students who are interested and intrigued by the operations of LSIRC.

This year, the committee worked in pairs and conducted group interviews. However, the interview process is mainly dependent on the each year’s committee and varies annually.

What do members get to do?

LSIRC’s members are privileged with opportunities to go for study trips, as well as to get involved in the planning and publicity of the club’s numerous events. These responsibilities however, are generally self-initiated, as a member can volunteer for as many events as he/she pleases. In order to experience the full benefit of being an LSIRC member, the minimum requirement for every member is to participate in one internal and one external event, subject to special circumstances members may encounter (i.e. going abroad for exchange programmes)

The committee also aims to give its members autonomy to organize and take ownership of their events, and urges any brave soul to speak up should he/she have any new and innovative ideas. 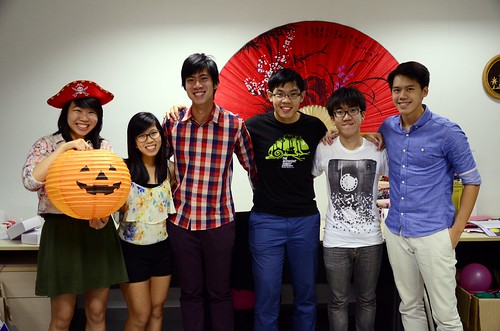 Liqi is an inspirational leader and doubles as a mascot for the LSIRC. As the troubleshooter of the EXCO, she adopts more of a macro-management role. She will deal with any issues that crop up, makes sure that every event is going smoothly, and chases the other members to make sure they are doing their jobs.

She has also been trying to find a more efficient way of commute to classes by constantly walking into walls, hoping that the walls will one day bear semblance to the walls at the 9¾ platform in Harry Potter.

Eunice generally assists the President and helps out with the secretary’s work of collating information and recruitment. She also handles any ad-hoc activities and things such as tracking the EXCO members’ birthdays.

As petite and demure as Eunice seems, she is also the fit and agile Frisbee Captain.

Basil, otherwise known as Studsil (get it? Stud+Basil = Studsil?) is a chick magnet/most popular guy in school/etc.  He is also known as Stripe-sil as he is usually seen making fashion statements with his bold choices of striped clothing. They appear to appeal to many students of the opposite gender.

Yunheng is his more culturally focused counterpart, known as the cultural junkie.  He is highly talented in facejacking, as testified by his amazed friends.

They each take charge of separate events: Basil does Valentine’s Day and Childrens’ Day while Yunheng handles Chinese New Year and Mid-Autumn Festival. They recruit members for their respective event committees and tend to give the committees a generous amount of discretion regarding what they want to do. Besides events management, they take charge of the exchange buddy program as well.

Dillon is the amazing finance guy who lives by the mantra of “a good treasurer should not be noticed because you only notice him if things screw up”. His job basically entails making sure they don’t overshoot the budget, and he likens this to being a goalkeeper in soccer. He also tries to liaise with firms for sponsorship and tries to find “lobangs” to make the events more affordable. An interesting fact is that he used to be a GEPer and he is (and will continue to be) on the Dean’s List as he is the resident genius and his CAP is comparable to the number of levels Block B has. Dillon is also the hero who brought Krispy Kreme to school during Childrens’ Day.

Erwin is known as the overworked one, and is a clean freak to thank for a clean (not really) LSIRC/MDC room. His long list of duties includes coordinates interviews and the elections, taking minutes, maintaining the Facebook page (which is the main source of communication with members), maintaining the mailbox, corresponding with the school, tracking what each member is doing, maintaining and updating the manpower list and complaining about things that don’t look right.

As a note to you ambitious LSIRC members, except for the Presidents, who are voted in, admission into the EXCO this year is interview-based. This is subject to change for subsequent years as it depends on each EXCO.

Since it isn’t often that we get an inside look at LSIRC, Justified took this opportunity to question the EXCO a little more on their club and debunk a few myths.

Myth #1: LSIRC is a club for clubbers

Clubbing on the job only occurs when hosting study trips or during the exchange buddy programme, where the international delegates or foreign buddies may request to get a taste of the Singapore nightlife. (Disclaimer: LSIRC members should not feel obliged to bring the international delegates of their buddies to a club) Should they decide to go with them, the role of the caretakers would be to bring them to popular nightspots and look after them. Caretakers should not be overly immersed in the ambience and festivities of the club in order to maintain decorum.

The concerned President was also quick to point out that LSIRC also brings the international delegates/foreign buddies on many other less-controversial activities, such as going for dim sum supper at Swee Choon, but she is bewildered as to why no one has since labeled them as a “Supper Club” instead.

Myth proven, although it ultimately depends on one’s definition of fun.

After all, if the members genuinely enjoy event-planning activities (as declared by some in their interviews), the responsibilities of LSIRC should not be too much to handle. When the committee was asked for tips for surviving in LSIRC, they had none, for they all thought that LSIRC was such a joy to be in that the word “surviving” and the sub-club’s name should never appear in the same sentence.

What were your most memorable experiences from the study trips?

The members’ experiences were mostly positive. They formed lasting friendships, were introduced to the authentic food and culture of the host country, and had the opportunity to learn about foreign legal culture from the students there. Members like Eunice and Liqi are still in contact with the friends they made in their study trips, and they highly recommend other members to give it a go as well.

What do you not like about LSIRC? How do you think this can be improved?

All the committee members were silent on this point. Their express omission to say anything was a testament as to how highly they thought of their sub club.

What can we look forward to in the coming year from LSIRC and its committee? 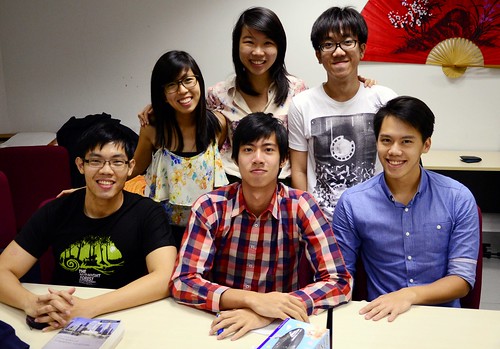 The writers hope that you have benefitted some way or another from this article, from getting to know more about the sub-club to understanding the personalities of the EXCO members. LSIRC’s EXCO would like to encourage members to continue with the good work, and urges everyone to brace themselves for yet another exciting term filled with more events.


Hot Chicks: An Afternoon at Jerry's with Spicy-Hot Buffalo Wings


[Dialawgues]: A Chat with a School Custodian