Hot Chicks: An Afternoon at Jerry's with Spicy-Hot Buffalo Wings

Some of you may have heard of the Yoshimaru ramen challenge at Holland Village. In fact, we know that a few of you brave souls have, indeed, attempted this gargantuan feat and succeeded (well, almost). Finish a bowl of ramen three times the usual portion within 15 minutes, and that gigantic bowl of 3 x wholesome broth, chewy noodles and succulent pork belly will cost you nothing at all (except, maybe, your appetite for ramen for the next five years).

However, being physically incapable of surmounting this great challenge even within 15 hours (and also because the Yoshimaru challenge is over for the year), these two writers nevertheless decided to challenge themselves in quite another way. As self-professed chili-lovers, we decided to check out Jerry’s BBQ & Grill to see if their hot buffalo wings are really as impressive (or as spicy) as they claim to be.

We headed down to Jerry’s downtown outlet at 92 Club Street, which is within 5 minutes’ walking distance of Chinatown MRT (but for those interested, they have a flagship outlet over at 277 Jalan Kayu, which has a weekday 10%-discount set lunch promotion from 12-2.30pm). The first adjective that comes to mind upon seeing the little shop situated along Club Street is “old-American rustic”. The diner is situated in one among the row of picturesque shophouses along the street, and its coat of fresh paint forms an interesting contrast with its vintage exterior. 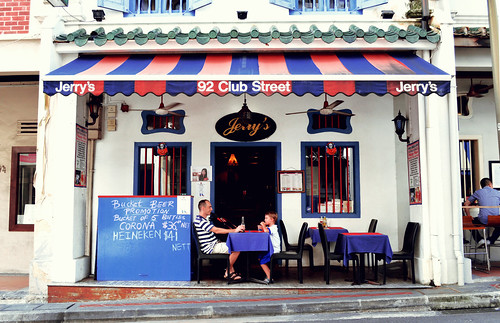 The outlet at 92 Club Street: you just gotta love the quaint quasi-modern shophouse exterior, and observe the adorable dad and son pair!

Aside from its signature red-and-blue style, the quaint little place is plastered with 90’s relics, such as vintage car plates from every American state, old postcards of American propeller planes and black-and-white posters of 1960s Singapore. It felt like we had stepped straight into the set of an old American movie (think: Top Gun). At the back of the ground floor is a bar top counter, and the rustic setting is likely to turn into a pub at night, with its well-stocked arsenal of drinks. The ground floor of the diner has a seating capacity of about 25, with two or three al fresco tables perched precariously at the edge of the narrow corridor outside. There is more space upstairs on the second floor, but this space is only open at night when the bulk of the night crowd descends upon this very hip eating street (one of us was fiercely chided by the not-too-friendly waitress upon venturing up the wooden staircase). 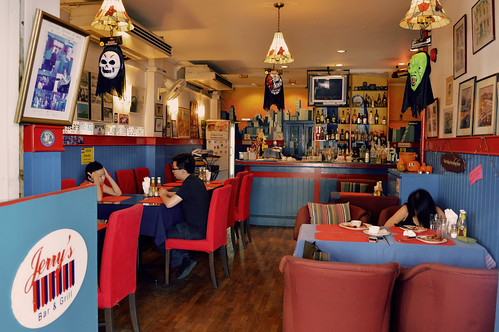 We decided to get straight to the point of our visit, and zeroed in on the buffalo wings section of the menu. Jerry’s buffalo wings come in five different levels of spiciness, and portions range from four wings ($10.95-$13.95, the spicier the costlier) to a dozen wings. We decided to start from the very beginning, a very good place to start. We ordered the first two levels (Level 1: Smokin’ and Level 2: Intensifire), requesting that they allow us to mix both levels in an order for four wings. Of course, you will have to pay more for the spicier level if you so wish to order a mix like we did.

We also went for one of their signature side dishes – deep fried mushrooms ($7.95 for a small serving for two). These will have you hooked at the very first bite; piping hot, juicy (chew with your mouth closed, please), and full of flavour, these morsels are paired with a tangy tartar sauce filled with pickle bits. The golden batter coating these mushrooms is slightly savoury, and is reminiscent of KFC’s Original batter, only more flavourful. 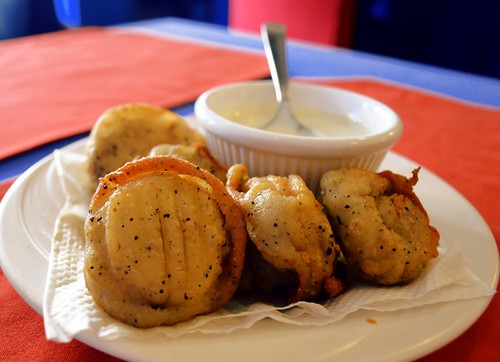 The piping hot and juicy deep fried mushrooms! You really shouldn’t miss out on these bite-sized morsels of heaven

For those who are heading to Jerry’s for a full meal, do try their barbecued pulled-pork which is “fall-off-the-bone” tender and full of smoky flavour. This is as close as you will get to an all-American meal in Southern USA. Jerry’s also stocks a range of hickory smoked barbecue items (beef, chicken and pork), a hearty oxtail stew, pasta, as well as various other items off the grill (think seafood, sausages and lamb chops).

Fortunately, we did not have to wait long before a plate of piping hot wings drenched in hot sauce was set before us. We exchanged nervous looks – just exactly how spicy were these going to be? We each picked up a Level 1 drumlet and (after muttering a quick prayer) bit right in, then held our breaths and waited for the stinging sensation to set in. But, set in it did not; in fact there was little spiciness to speak off, but just a really well-seasoned wing packed with flavour. Excited to get started on some actual spice, we set aside the Level 1’s for the time being and each picked up a Level 2. This time, there was undoubtedly a stronger hint of spice that left a tingly sensation on the tongue. But our mouths still weren’t burning. 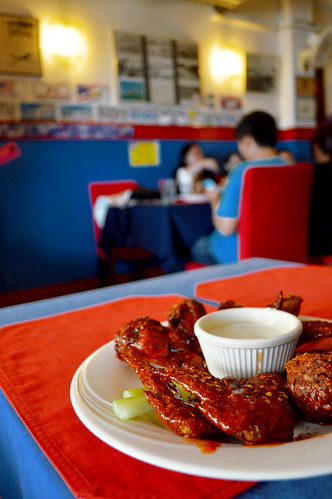 The Level 1 “Smokin’” and Level 2 “Intensifire”! Mouthwateringly good with the generous serving of hotsauce, as well as vegetable sticks and blue cheese dip!

As both Levels 1 and 2 had failed to leave us gasping for some spiciness-quenching beverage (try milk, if you think it necessary), we took the plunge, and ordered yet another plateful of four wings, all set to take on Levels 3 and 4: Fireplus and Chef’s Challenge. This time, the wings did not disappoint. Level 3 wings were sprinkled with unground black pepper-corns and chilli flakes, while Level 4 wings were drizzled with some very very spicy hot sauce; these immediately delivered the mouthwatering heat that any chilli-lover would crave. We would say that while Level 4 promises to set your mouth on fire, the Level 3 wings are more flavourful. They were fried to perfection (hotter and more succulent than the previous plate), with crisp skin that was not too oily and with meat still juicy and tender.

If you feel that these deep-fried wings and so much spiciness are a tad too unhealthy, you might be relieved to know that all servings of buffalo wings are accompanied with sticks of sweet raw carrot and celery. Dunk these morsels into the dish of blue cheese creamy dip, and there you have it: fiery flavour balanced out by not-too-overbearing cheesiness. It is our humble opinion, however, that Jerry’s could have been more generous with the vegetable sticks.

We have one word to describe the entire experience: shiok. Looking back, we wondered if we should have gone straight to Levels 3 and 4, and maybe even hit 5. By extrapolation, we could have conquered Level 5: Jerry’s Insanity. So for all you chilli fanatics out there, do give it a go! We would have loved to order a third plate of wings, but there’s a reason why we opted out of the ramen challenge; we just couldn’t eat anymore. It you are more timid and chilli-intolerant, like us at the start, or if you’re planning to bring your younger sibling along, then start with Level 1, because the flavour won’t disappoint. If you don’t mind the calories, and want to challenge yourself with Jerry’s 5 Levels of Spiciness challenge, make a trip down with a group of friends (this is recommended, because some of the portions can be rather large, and it would be great to order a few different dishes and try a bit of everything) and get ready for a lip-swelling good time!

View their online menu over at http://www.jerrybbq.com/menu1.htm