What better way to begin the New Year than a contracts tutorial? Why, Encore of course!

After an afternoon of having your mind boggled by the ramblings of H.L.A Hart, the cool evening breeze that greets you as you step out of the library was enough to get you all pumped up for last night’s gig.

It was going to be a battle of the bands as 5 of the best bands in Law School stand in line to find out who’s the mother of all bands – at least until next year.

As you enter the moot court, you could smell the Sarpino’s wafting through the air, leading you towards the busy corner where everyone was trying to get their hands on a slice. Though I must say, from the precarious “leaning tower of pizza” boxes (pun credit: Jermaine Ng), there was surely enough for everyone. With a bottle of Corona in hand (that is, if you were early enough), the crowed warmed up for an epic night. 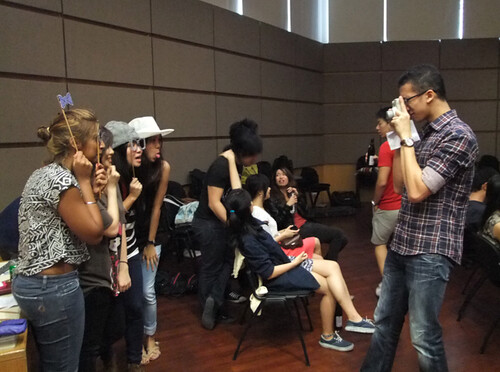 Soon, the Michelle Tham and Nigel Yeo took to the Christmas-lighted stage with light banter and apparent comedic chemistry as they introduced the judges. 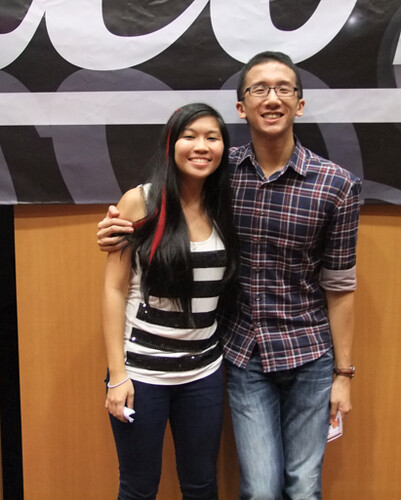 While we are all acutely aware of Prof Goh Yihan’s legal genius, we found out that he also professes to be familiar with the musical works of Andrew Lloyd Webber. Prof David Tan has an impressive portfolio of fine art fashion photography that has graced the pages of magazines such as Elle, Harper’s Bazaar, Marie Claire, Men’s Folio, Singapore Tatler and Men’s Uno. But his creative talent is certainly not limited to photography, as we learnt about his particular taste in music. Prof Eleanor Wong is no stranger to the theatre scene. She is a playwright with plays both published and performed. 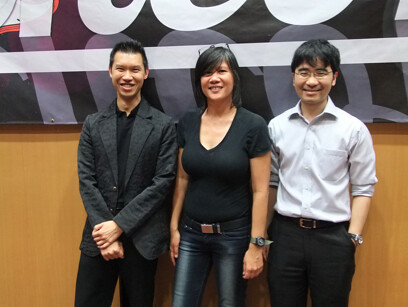 Clearly, we had a distinguished panel of judges. And we needed no reminders. The judges took their jobs seriously, not only handing out compliments but also dishing out constructive criticisms — yes, even when it hurt. The oohs and aahs from the audiences were a common refrain as the judges stuck with character and spoke their minds. Even the eventual winner was not spared. While the judges sang their praises, Prof Eleanor pointed out that the microphone was a little overworked. Overhead on the floor: “The judges are like a sarcastic pitchfork.”

By now, you must have heard who won. Overheard was abuzz with activity late into the night with pictures and comments of the winning band — One Night In Wesley. 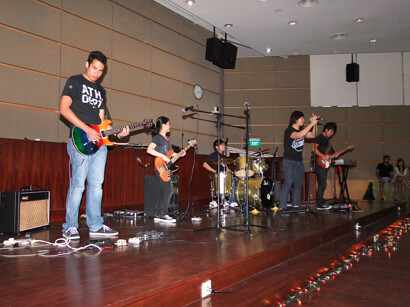 My my, Mr Pelican Fly. When this band started Nicki Minaj’s Superbass, complete with the rapping, it was clear that they we’re a crowd favourite. They even had Prof Eleanor with her hands up in the air. Andrew Wang, vocalist, brought effort and energy that was visible. The band managed to rework this pop chart hit, injecting elements of rock, a hint of punk and lots of attitude — more attitude than Minaj’s bass. 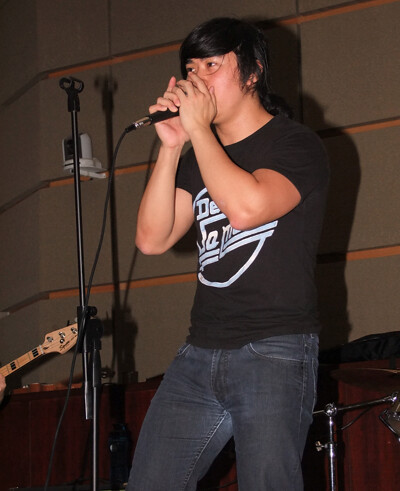 Evidently a band comfortable with reinterpreting the songs they cover, One Night In Wesley then launched into the oft-played Slow Dancing In A Burning Room by John Mayer. They breathed a certain soul, depth and maturity into the song. Not to mention Teren Perera’s delicate guitar work. Don’t get me wrong, it’s hard to find fault with John Mayer and his work, but as Prof Eleanor put it, the band made the song a little less “effeminate”. (I know, I know. A Mayer fan here as well, but she had a point.)

They ended the set with a Stereophonics number — Dakota. The band filled out this song with Andrew working the small stage with his rockstar antics and intense gaze. The rest of the band held their weight with David Ang on drums and Yong Shaowen on bass. Wesley Chan put out a strong challenge to Teren’s rainbow-coloured guitar with sick solos and rifts. 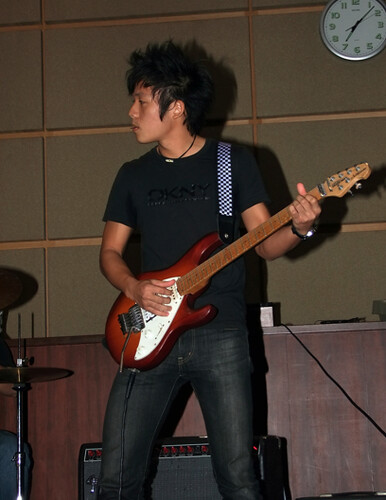 The judges loved the performance. Their main quip seemed to be of the band’s name. They suggested that a name change was in order since all the members were equally great. But if they decide to stick with this one, Prof David mentioned that he’d much prefer “One Night WITH Wesley”. For purely grammatical reasons of course. 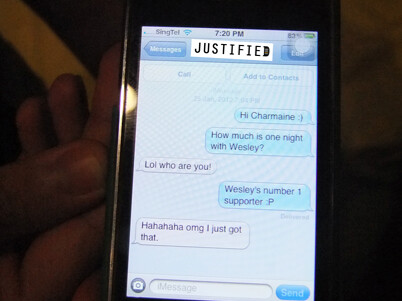 So did the judges think the class made the right vote in One Night In Welsey? We asked them and they were only willing to say that the decision was “unanimous”. The judges vote counted only for 25% while public (or at least the part of the public that was there) voting made up for the rest.

However, the other bands put up a quite a show as well. 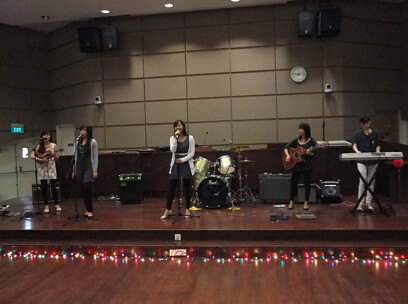 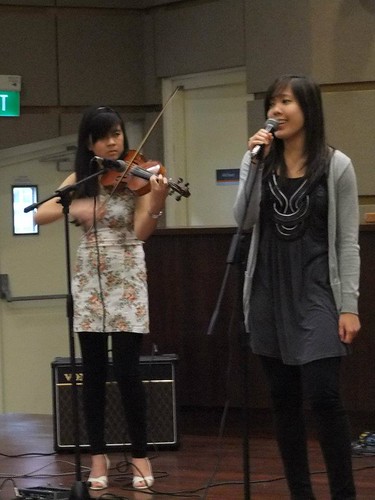 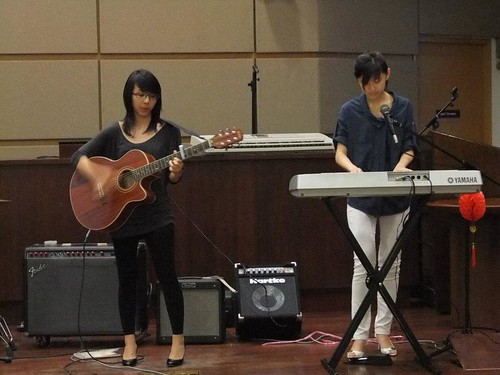 Burnt Banana brought with them an acoustic set that boasted a classical violinist. The feel good vibe that came from songs like Jar of Hearts (Christina Perri) and In Your Arms (Kina Grannis) emanated from the vocal harmonies and the soothing pull of the violin. (By the way, the music video for In You Arms was made entirely out of jellybean art and is definitely worth a check out.) The band then showed a little attitude with Snow (Hey Oh) by Red Hot Chili Peppers, although for some reason it somehow sounded Irish at some parts.

Being the first band of the night, we did not quite know what to expect from the judges but boy, did they bring it. They were somewhat harsh, but largely honest, in saying that the band did not quite warmed up to the set. But we all know it’s tough being the first act. At least the judges knew how to live a little; Prof Eleanor ended her critique with an unexpected “Good Tights”.

But admittedly, in retrospect, this all-girls group definitely stood out from all the other bands in terms of their genre of less noisy-rock songs and the (since time immemorial) unfair advantage of being just plain loving, sweet and beautiful ladies! 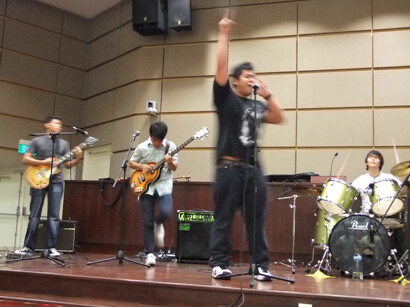 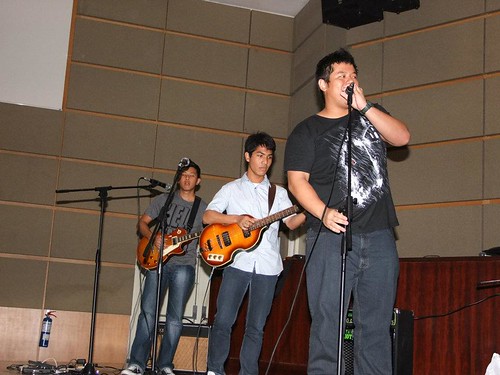 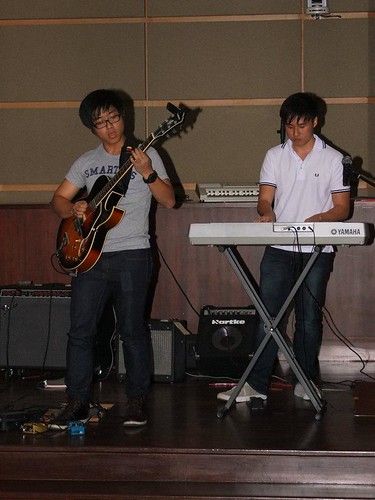 Headnotes had a tough act to follow, coming on after One Night In Wesley. But they had a strategy — Isaac Chua. It was evident that the band members had a certain admiration for Isaac and by the end of the set, everyone in the room shared that same admiration. Michelle Tham quipped that he was “sturdy, solid and immovable”. His sense of humour carried the band through a series of false starts that brought us back to the time of Power Rangers and then back to the present Chinese New Year Festivities with Cai Shen Dao — complete with throwing gold (chocolate) coins into the audience. Prof Goh Yihan would agree that they certainly brought on their performance interest.

The set consisted of Long Way To The Top by ACDC (Isaac: We are a rock band, we only do rock songs.), Korean song I’m A Loner by CN Blue and the singalong classic Don’t Look Back In Anger by Oasis. We have to give props to Haziq’s believable scream at the end of the ACDC number and that the band got the crowd waving their iphone flashlights. One has to give it up for Shaun with his quick and precise drum moves, Jon with his nimble fingers on the keys, Justin with his great rhythm on his guitar, Haziq on the bass guitar and his perfect vocal accompaniments, as well as Isaac with his sexy vocals and memorized-Korean lyrics.

The judges complimented the good song choice (although Prof Goh Yihan did get a bit technical, suggesting that the band did 5 songs instead of 3) and the rapport with the audience. However, they felt that the volume mix between the instruments and vocals could have been better managed. 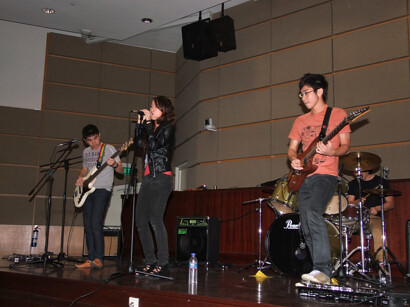 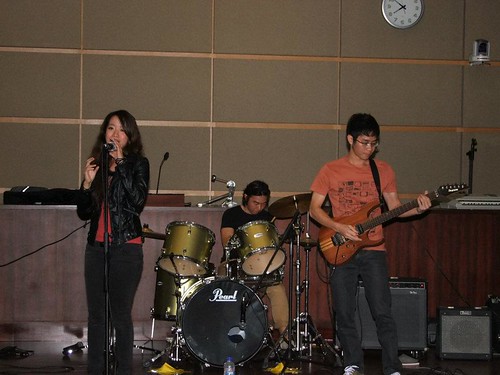 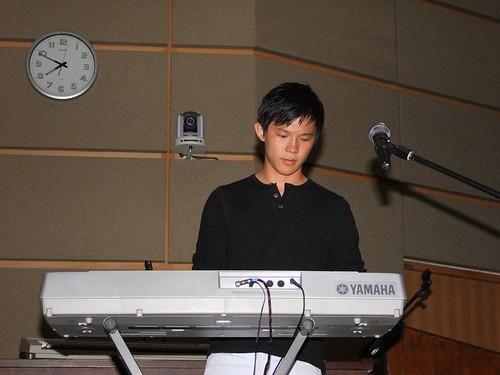 Blackbird was the only other Year 1 band and they were out to represent. With rocker chic Delise Yang, Darrell Tan (lead guitarist and professional Goh Yihan doppelganger) and a special guest from FASS behind the drums, they delivered a couple of interesting mash ups. First was a Motown mix of Cee Lo Green’s Forget You and Sara Bareilles’ Gonna Get Over You. While the motown sound of the 60’s was an interesting touch, it was the second mash up that got the audience sitting up. The medley of Katy Perry’s The One That Got Away and Adele’s Someone Like You showcased the earnest quality of Delise’s vocals and even featured a short musical love affair between Lim Chuan and Darrell somewhere in the middle.

You know you’ve done your work as a musician when your audience feel the song and start to think about their own lives. Blackbird did just that, with Prof Goh Yihan musing if he would score better in the love department if he had picked up the guitar in an alternate universe, much like his doppelganger. (Take the hint, single ladies.) Prof David was unsure about the Cee Lo Green number but adored the Adele one. 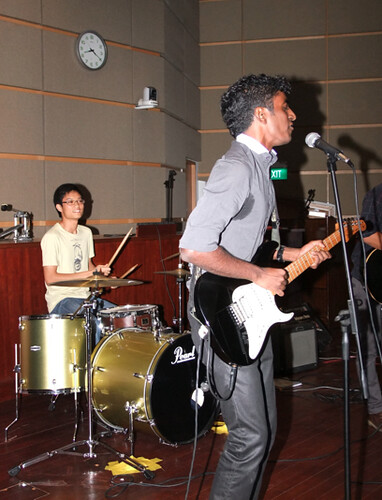 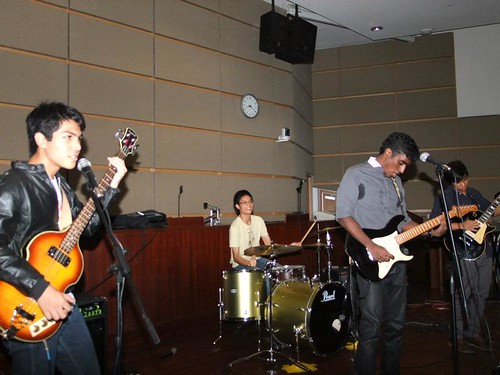 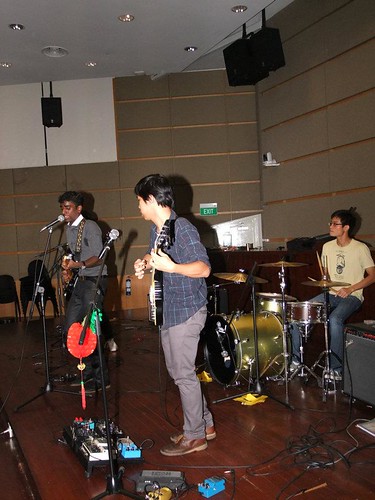 Elephant Bird got the crowd (and even the judges) up on their feet by asking politely. The mostly indie set that would appeal to the hipster crowd included I Bet You Look Good On The Dance Floor (Arctic Monkeys), Learn To Fly (Foo Fighters) and Take It Or Leave It (The Strokes). From the cool Brit influence of Arctic Monkeys, to the jumpy Foo Fighters number, the band worked the crowd hard. The crowd, perhaps shy from the lack of alcohol, initially nodded politely where they stood. However, unsurprisingly, the crowd soon got into the beat and rocked on like there’s no tomorrow.

Prof Goh Yihan confessed that this was not his genre of music, but let in that he felt it interesting, albeit a little uniform. Prof Eleanor agreed, preferring to have a little more variation in the “love making”.

Rounding up the night, the judges decided to join in the fray and gamely belted out a few lines from Yue Liang Dai Biao Wo De Xin and Memory.

Speaking with them later, they raved about the “amazing talent” they saw tonight. They felt that more of such events should be held, outdoors even, and that we should invite the faculty more often. Their favourite song of the evening? Prof David and Prof Goh Yihan shared the same admiration for Blackbird’s Someone Like You, while Prof Eleanor liked One Night In Wesley’s Slow Dancing best, saying again that they did it with much more gumption and masculinity than Mayer himself. (I know, I know.) 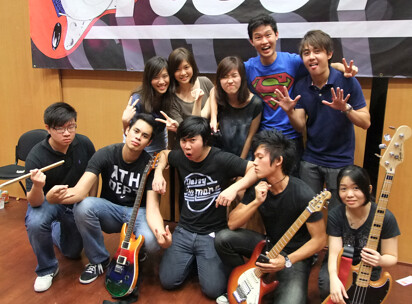 We’ve got these people to thank for the evening — The Year 1 Class Committee.

The night ended with One Night In Wesley giving an encore performance of Superbass and Dakota. The polite audience finally let loose a little and did more than just sway to the beat, although not with as much enthusiasm as Chuan’s (Blackbird) one man mosh. We even caught the judges dancing to Dakota. 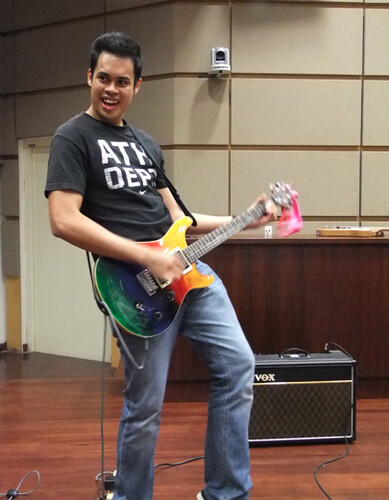 Word has it that the pink thong hanging from Teren’s rainbow guitar belongs to Chuan – no wonder Chuan was moshing alone.

Now, what’s a competition without scandal?