2017’s edition of the annual Advocacy Cup, sponsored once again by Drew & Napier, was the stuff out of thrillers. It involved drugs, betrayal, two forms of piracy (criminal conspiracy and pirate piracy), luxurious sailboats and copious usage of the word ‘Sayang’. And this year’s finalists duked it out like duelling captains from the days of Francis Drake, really exemplifying the adage that the tongue is mightier than the blade. 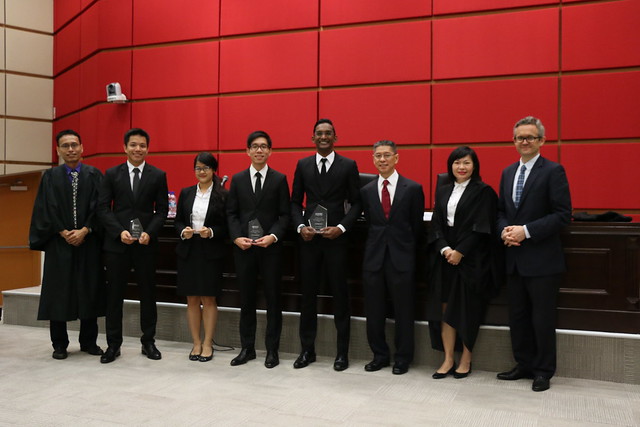 The trial problem for 2017 was a case involving piracy under Section 130c of the Penal Code for conspiracy to commit Piracy. The accused, the aptly-named Aruj Merah Janggut (Red Beard) had allegedly conspired with a ‘Hizir’ to steal the Golden Hind from his employer, the yet-again punny Mr. Lee Tai Koon. Counsels were required to deliver their opening statements, conduct examination-in-chiefs, cross examinations, and re-examinations of the respective witnesses, and finally deliver their closing statements. And despite all the pressure from opposing counsels as well as from the esteemed panel of judges, the finalists managed to duke it out, with Honourable Justice Choo Han Teck calling the final decision ‘too close to call’.

One of the great differences between the Advocacy Cup and regular moots, aside from format, is the inclusion of the witness. The finalists have great freedom in advancing their own alternative case theories through priming their witness to answer in a certain way. And indeed, both sets of finalists had wildly differing and truly compelling case theories that made it difficult to decide who was really telling the truth.

In the first round of the evening, Law May Ning, acting on behalf of the prosecution, faced off against Daniel Fong, who was acting as defence counsel. 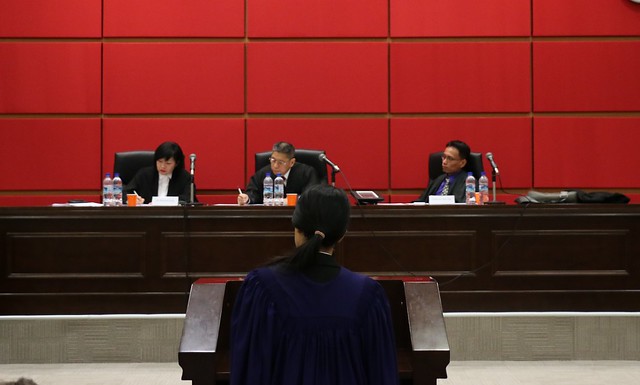 Prosecution started off by attacking the credibility of the accused’s testimony, arguing that he did have the dishonest intention to deprive Mr. Lee of his prized Golden Hind, citing actions he did such as turning off the GPS of the boat at 9PM as well as drugging Mr. Lee. Mr. Lee testified before the court that Aruj was an impatient man who lusted after the vessel.

Defence was quick to fire back in cross-examination. Aside from attacking whether Mr. Lee could really tell the mysterious pirate to be Aruj under the influence of alcohol and sleeping drugs (Mr. Lee had said he recognised him from a lisp), Defence also advanced the contention that the accused was a person of good character and that to steal the vessel, yet return to report to the police was clearly illogical. However, Prosecution succinctly countered his case theory in re-examination, emphasising that only Aruj had access to the sleeping pills. 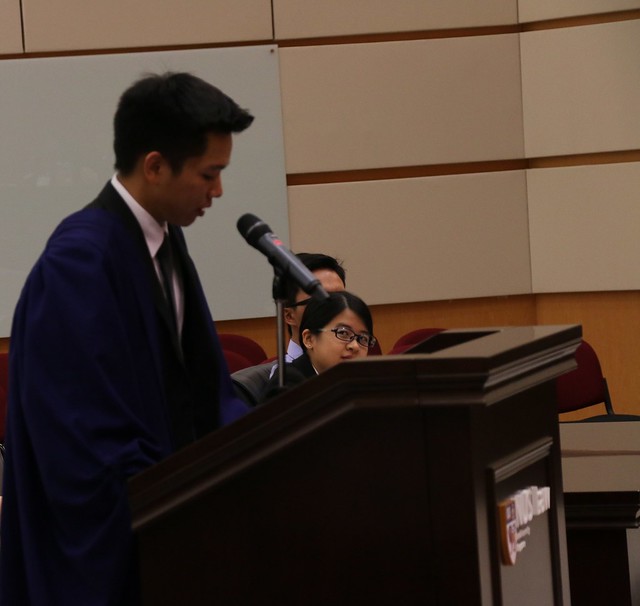 Undeterred, Defence continued his case theory in his opening statements that Mr. Lee was one who easily jumped to conclusions and that Prosecution could not prove the offence beyond reasonable doubt. However, Defence delivered a zinger — that one of the statements which was indicative of his guilt was adduced under inducement, from being denied food, water, and medical attention. The Year 1s in the audience immediately thought to their LARC assignments in Semester 1.

Prosecution continued on the warpath in cross-examination, attacking the accused’s peculiar choice of nickname, as well as inconsistencies in his testimony. Prosecution even went to the lengths of researching how long it would take the accused, a seasoned sailor, to sail back to Singapore on a rowboat, and about the alleged mistreatment from the police, emphasising that it would be a great offence to falsely accuse an officer of a crime he did not commit. Defence responded in cross-examination, getting the accused to talk about his love for all boats in general as well as his massive nomadic family.

In closing, the clash between the finalists suddenly increased in intensity, with Defence firing off a great number of objections, Hong-Kong-TV-Drama-Style, during Prosecution’s closing statement, over speculation, the late introduction of new evidence and over the proceedings of the trial. 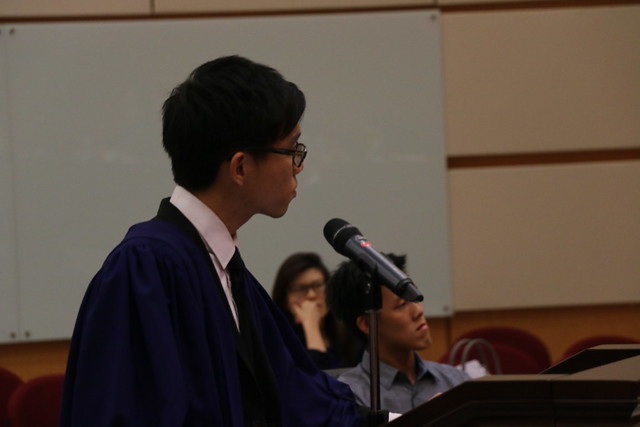 In contrast to the intense proceedings between the first set of finalists, Timothy, acting for the prosecution, started off with a more methodological approach, addressing the need to prove actus reus and mens rea and citing cases such as Sunny Ang v Public Prosecutor. However, the same cannot be said for the defence counsel, V Santosh, who was arguably the most aggressive finalist that night, masterfully reining in the witness into submission. 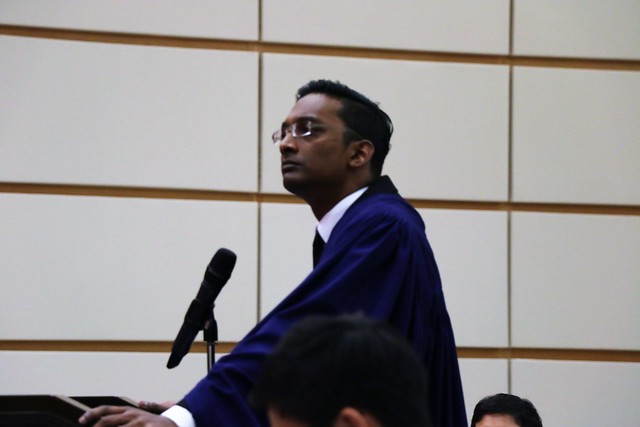 Defence attacked the witness on several points — including whether he truly knew that Aruj had committed the act or whether he merely assumed; to the details of the incident itself and the fact that he did not mention the lisp at all to police, to paint him not only as an evasive witness, but also as someone who did not actually hear the lisp he claimed he did, but rather citing the lisp only to bolster his claim due to his premature conclusion that Aruj had committed the crime. Surprisingly, Prosecution chose not to re-examine the witness.

Once again in great contrast with the first set, the accused was decidedly wittier and snarkier in the second round of proceedings, with the judges and the courts laughing at several points of the trial. When Prosecution started his cross-examination with stating that the accused was “taken in by the Golden Hind”, the accused fired back, saying that ‘that’s not a question’, much to the chagrin of Prof Alan and the amusement of the audience. Nonetheless, Prosecution persevered on, attacking the credibility of the accused on over 11 different contentions, including discrepancies in the police statement, the character of Mr. Lee, and to the existence and relationship with the mysterious Hizir. 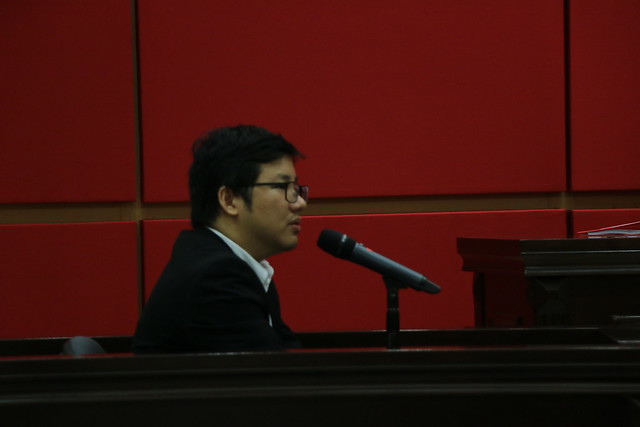 “A Sailor loves his boat, but his first love is the sea”

The case theories varied wildly between both sets of finalists as well. One key point of contention was that the accused had alleged that his hands were bound, but the rope found had no traces of DNA. While the first accused argued that the rope was tied loosely since Hizir was his brother, the second accused alleged that the rope was made of nylon, a synthetic fiber which was slippery when wet, allowing him to work the knots loose. Likewise, while the first accused argued that he only confessed to drugging Mr. Lee given the circumstances, the second case theory was arguably more devilish, with Aruj confessing to drugging Mr. Lee, but only to shut him up, and that he had been doing it every time they sailed. The judges themselves looked to be taken aback by this unexpected answer.

In closing, Defence argued over the consequence of the denial of medical attention after the police statement was made. Defence also contended that there was no DNA evidence or handwriting analysis conducted, and that the burden of finding the mysterious Hizir was on the police, since Aruj had been incarcerated for 13 months. Defence also went on to cite the standard dosage of the sleeping drug used, as well as referring back to the case of Sunny Ang and arguing that an irresistible conclusion had not been met.  Prosecution stuck to his guns, continuing to attack the inconsistencies in Aruj’s statement, calling it a web of lies, and that Mr. Lee was a witness who was forthright and corroborated by extraneous evidence. 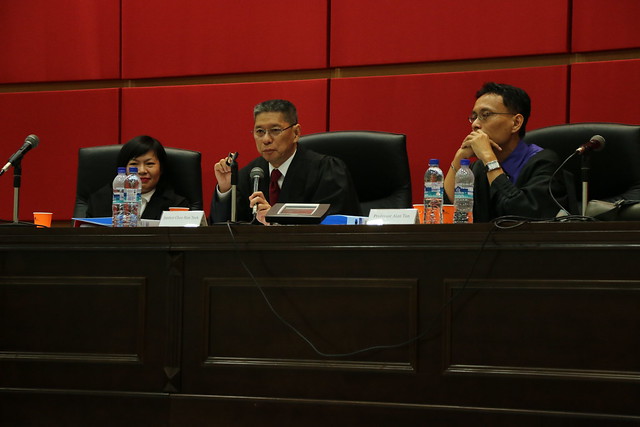 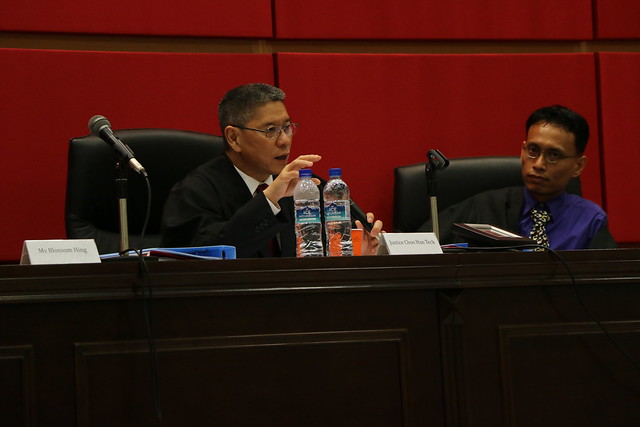 In delivering the closing speech for the competition, Honourable Justice Choo Han Teck said the following:

“I would like to remind everyone what the competition is about. It’s about advocacy — when you become lawyers, you participate in the art of persuasion. There are only 2 ways to do this — either through writing a long submission to the court, or the other: to stand, talk to the witness, to the judge, and with that, you hope to convince the judge of your point of view. It is important that you understand psychology in order to perfect your technique . . . what human beings do determine how you must act.”

Espousing more on the ancient art of oratory being the ability to stand and tell a story which keeps the audience spellbound, Honourable Justice Choo Han Teck went on to give his own examples from his days as an advocate as well as examples of the ways he would have done the defence and prosecution. Before announcing the results, he once again emphasised the importance of good technique, the need to understand human psychology, and to master the craft of telling a story.

After much deliberation, the 1st and 2nd place finalists were decidedly quite close, as were the 3rd and 4th.  It was an ‘unanimous decision’ that joint 3rd would go to Daniel Fong and Law May Ning, while, as Honourable Justice Choo Han Teck mused, the prosecution once again suffered under the burden of the doubt. Timothy Ng won 2nd place and 1st place went to V Santhosh, for what the judges agreed was the best technique in the whole competition.

Congratulations to all finalists!

And with that, Advocacy Cup 2017 came to a close. Throughout the course of the competition, the participants gave it their all in preparation. Year 1s would collaborate on case theories until late in the night. You could find people priming their witnesses all over law school, even in the bathrooms. After such a gruelling 3 weeks, I am sure that the finalists would agree that their effort has been worth it.  Many thanks to the NUS Mooting and Debating Club as well as the organising committee for this year’s Advocacy Cup for their efforts in making this year’s cup a rousing success.