This year’s Attorney General’s Cup Finals was a thrilling one like its predecessors. Into its 4th edition, it was a great honour to have three of Singapore’s heavyweights in the legal fraternity– Attorney-General V.K. Rajah S.C., Judge of Appeal, Justice Andrew Phang and Justice Quentin Loh– presiding over the day’s proceedings. 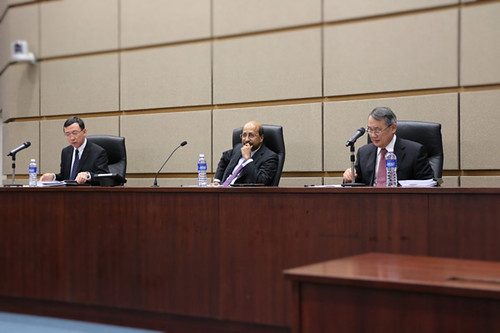 The fight for first place was an internal one as both finalists hailed from Singapore Management University (SMU). Nonetheless, the audience were treated to an hour of intense intellectual debate as both mooters displayed immense finesse, clarity and confidence during their moot.

This year’s issue was in relation to section 17(2) of the Official Secrets Act (OSA). The accused was charged under the OSA for communicating a ‘Confidential’ document to an unauthorised person, having been entrusted with this document by a person holding office under the government.

The first speaker, Miss Wong Yan Yee, acting for the Prosecution, was extremely composed and calm throughout her fifteen minute submission, and answered questions fired at her with great intellectual courage and firmness. Nonetheless, Attorney-General V.K. Rajah S.C. still managed to stump her with the question of how a defence in the Penal Code could actually extend to an offence under the OSA. While the judges did not seem incredibly satisfied with her answer, her composure definitely gave her plus points. As she continued with her second submission, she demonstrated what a powerhouse mooter is like with consistent clarity and confidence throughout her moot. 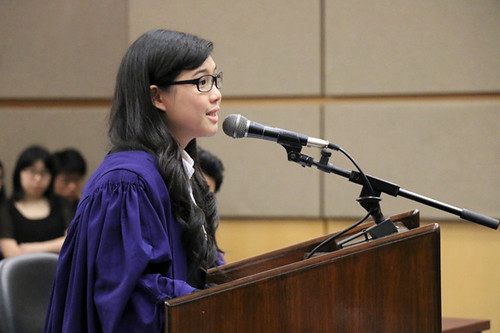 Next up was Mr Sean Sim representing the Defendant. It was a gruelling moot for Mr Sim as he was interrupted by the judges seconds into his first submission, and was asked to consider the same question posed to Miss Wong. He answered the question with great confidence, backing up his arguments with local authority, and engaged both the judges and audience with his skilful navigation through the law. The banter between Mr Sim and the judges evoked much laughter from the courtroom as the audience witnessed the light-hearted side of the judges. Despite the relentless grilling from the judges, Mr Sim spoke with utmost conviction and indeed proved himself to be a strong contender for the title. 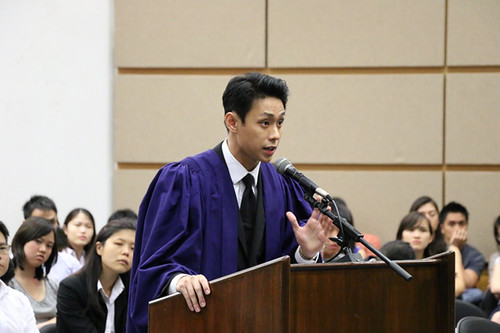 The second speaker, Mr Sean Sim, up on the stand

As the judges took their leave to decide on the eventual winner, the courtroom buzzed with excitement after witnessing such a high level of mooting. When the judges returned, the audience peered with anticipation, excited to know who was crowned the Champion of the Attorney-General Cup 2014.

Delivering the results, Attorney-General V.K. Rajah S.C. said, “It was a good effort from Sean, and we have been very impressed with his arguments. But in every competition there has to be one winner, and that has to be Miss Wong.” 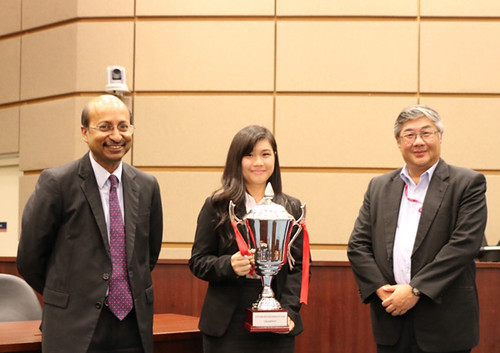 It was a joyous occasion for SMU as they also took home the Cup as overall team champion. Special mention, though, must be given to Douglas Wong from NUS who made it to the semi-finals and clinched the award for Best Memorandum.

As the competition drew to a close, the judges, competitors and audience were treated to a sumptuous buffet spread, leaving everyone present fully satisfied in both mind and body. 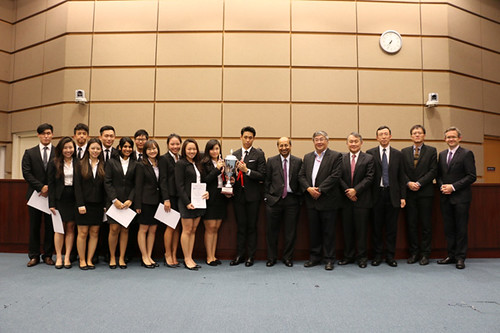 The round of 16 participants with the judges and deanery