Sugar (bananas, Twiggies, assorted loaves of bread), spice (the girls) and everything nice (i.e. didn’t come here expecting to decimate the competition). These were the ingredients chosen to make the perfect netball team! But Yufei (Y2) accidentally added an extra ingredient to the concoction — Team Managers Louis (Y3) and Wang Ye (Y3). Thus, the Law IFG 2014 netball team was born! Using their above average netball skills, the team have dedicated their lives to fighting crime and the forces of Medicine!!!

It was a sunny Saturday morning when the netball team arrived at the SRC netball courts. Armed with nothing but food, sunblock and the (free) shirts on our backs, we arrived looking to have fun and (hopefully) do Law proud.

The first of four games was against Dentistry. The first quarter saw Law take a narrow lead thanks to a sublime goal by Swathi (Y2), but all was even in the second quarter when Dentistry managed to equalise. Both teams were neck-at-neck and the game went down to the wire, with (the barely recovered dengue victim) Yi Zhen (Y3) scoring the winning goal, securing a hard-fought 2-1 victory for Law.

Our next opponent was the Faculty of Science. Lightning quick and tenacious, the team found it difficult to cope with the onslaught, despite our best efforts. Regardless, the team was gracious in defeat, congratulating our opponents at the end of the game. 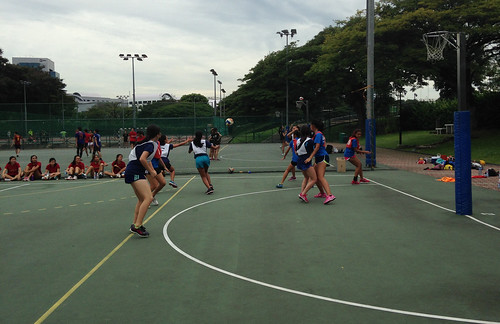 The girls in action against Science. The Med girls look on in awe at the sidelines

After an energizing lunch of bananas, bread, cereal bars and isotonic drinks, the team felt invigorated and ready to tackle the second half of our fixtures. Our post-lunch opponents were the School of Design and Environment (SDE), decked out in their luminous orange shirts. Fast, aggressive, and way too tall to be oompa-loompas, SDE proved to be tough opponents, their stellar defence preventing us from converting several good chances. Assessing the situation, our Team Managers and teammates who were not playing that game decided to resort to desperate measures and started shouting ‘spells’ at them from the sidelines: Non est factum! Actus reus! Inter alia! Novus actus interveniens! (if you can’t beat them, at least confound them with Latin maxims right?) For some extra luck, we tried shouting our Professors’ names at them as well (some names worked better than others; don’t ask us why).

A highlight in between games was our growing sisterhood with the School of Computing, which started when we shared the bench to put our belongings. 30 bananas, 38 cereal bars and 3 loaves of bread were enough to spark off a friendship with a faculty whose fates were similar (or perhaps even worse) than ours. The camaraderie developed during our breaks made the sweltering heat bearable and the time pass faster.

As we approached our final fixture for the afternoon, inclement weather was beginning to set in. The disappearance of the sun and the gathering of dark clouds was perhaps a fitting atmosphere against which we would face our long-standing rivals — the Faculty of Medicine (perhaps also foreshadowing, but you didn’t hear this from this writer). The team put up an incredible effort, giving our all for the last game of the IFG season, but we were ultimately overcome by Medicine’s incredibly strong and talented players (and their incredibly long arms and legs).

Exhausted and sweaty after hours of netball, the team concurred that we had a great time that afternoon. The bonds we forged and the laughter we shared during trainings and on the day itself are infinitely sweeter than any victory we could have achieved. We hope to improve on our current efforts and come together again to do Law proud in the future (*cough*Law-Med*cough*)! 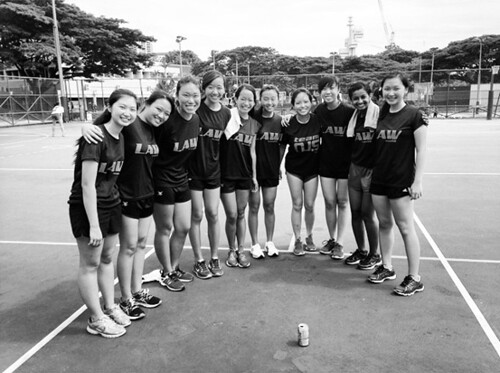