31 August 2014 — It was a regular Sunday except that in one of the multi-purpose sports halls at Kent Ridge, an exciting line-up for IFG Women’s Floorball was about to begin.

Team Law kicked off the first match of the day against Science with our own team players who possess a variety of floorball experience that range from three years to three weeks. Although it was expected that Science would send in a strong team with their talent-scouting from their humongous faculty, we were taken aback when they swiftly scored two goals within the first three minutes. After several minutes, the seniors and more experienced players converged to form a line of their own in an attempt to recover goals before substituting around. Despite fighting gallantly, the gap between Law and Science stretched further as the score finalised with a 0-5.

Not to be deterred by this, the team reflected and discussed a variety of scare tactics and reformation of strategies on how to attack our next opponent, the powerhouse that is Engineering.

The team concurred that this match was played a lot more aggressively than the previous one guided by our burning desire to snatch the ball. The highlight of the match was when Jean (Year 2), in an attempt to break Engineering’s score into the goal, accidentally fell onto the ground with both knees on the floor, thereby effectively stopping the goal. However, she was (rather unfairly) fouled for “lying on the ground”. She sat out for what was supposed to be two minutes but was instead reduced to ten seconds when the Engineering team scored soon after.

Eventually we lost to Engineering 0-2  despite the tight defence on our part, which was somewhat of an improvement from the first match.  Delise Yang (Year 4), a seasoned Floorball player, commended Xuekun (Year 3) for her strong blocking and Samy (Year 1) for her scare tactics, such as hitting the stick on the floor really loudly which legit scared our opponents.

During the post-match talk, Jean, Team Captain and Maria (Year 2) vice-captain affirmed the common perception that Law is usually quite chill about IFG, and that “it’s not about winning or losing but about having a little fun”. That became our motivation for the next match.

“Warm up” before the second half of the match

Law vs SDE (School of Design and Environment)

After a yummy lunch and chill session (while other teams were busily practicing their passes and warming up), we re-entered the court after doing our own warm ups — 10 high jumps and our rather failed attempts at doing pull-ups.

Within the first few minutes, with Xuekun’s assistance, Maria struck in a ball — our first goal for the day and match. Huge cheers erupted from our side and for the first time in the day, we were leading 1-0. SDE, not sweating it, scored the equaliser soon after. Our streak continued when Clara (Year 2) swiftly shot in our second goal but with SDE’s next goal, the score remained at 2-2. It was a truly heart gripping match when the ball rolled from the half-court and threatened to enter SDE’s open goal. We only heaved a sigh of relief when Jean sprinted back to fish the ball out before it entered the net.

Within the last few minutes, Samy skilfully scored our third goal as she sent the ball flying into our goalpost. If possible more tensions rose as the ball travelled from one side of the court to the next, and out of nowhere SDE’s attempt to score nearly succeeded when Jean stopped the ball between her ankles. Unfortunately, the referee awarded a penalty shot for SDE — an open goal with no defender, a sure guaranteed goal thus bringing the final score to 3-3. While Jean tried to reason that this penalty shot was not stated in the rules of the game, as good law students with terms and conditions; the rules had mentioned that a board was to be used for penalty shots, the referee replied that it was only applicable for the men’s match, and even stated that if the board was included it would be “harder to score” for the team taking the penalty shot. They did however say that they would make the rules clearer in the future. Though it was a draw, there was commendable effort from the whole team to put on a strong fight.

The game started strong for the Law team when we scored the first goal; Clara assisted the goal and Samy tapped it in amidst the confusion with massive crowding near Law’s goalpost. There was increased team spirit and better formation as USP equalised the second goal. A surprise breakthrough was led by Jean who bolted from her defence position, and from the back, held the ball through the half-court and shot it in.

The score remained at 2-2 as USP too, scored another goal, and as our fighting spirit reached its zenith, there were three near scores but they were all narrowly missed. As the game proceeded, the Law team was awarded one free hit, and for some reason was given a re-attempt. But it was to no avail. The second free hit by the Law team was cancelled by the frustrated referees as they blew their shrieking whistles because the team exceeded the time limit before hitting it off.  Each time when the Law team nearly scored or attempted to, there was loud cheering but not from our side. We were momentarily baffled when we realised that the Science team was cheering for us in hope that we would win USP and thus eliminate them from reaching the semi-finals. Our players admitted that they “felt like superstars” each time they heard those screams.

Finally as the whistle was blown to signify the end of the match and the day, we shook hands with our opponents for the last time today, and hopefully, we will come back stronger. 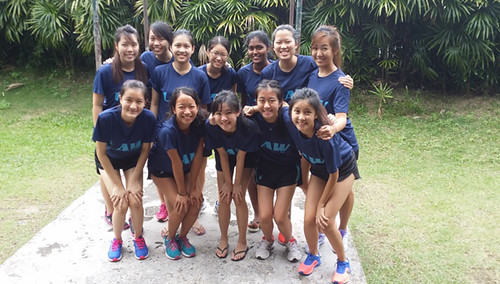 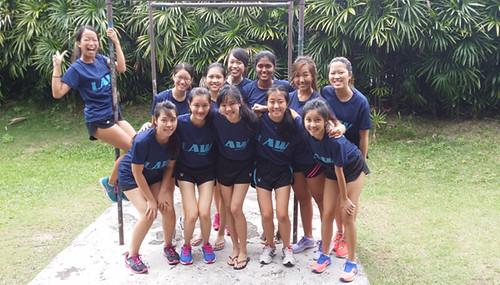 Mandatory fun/cutesy shot after playing their hearts out