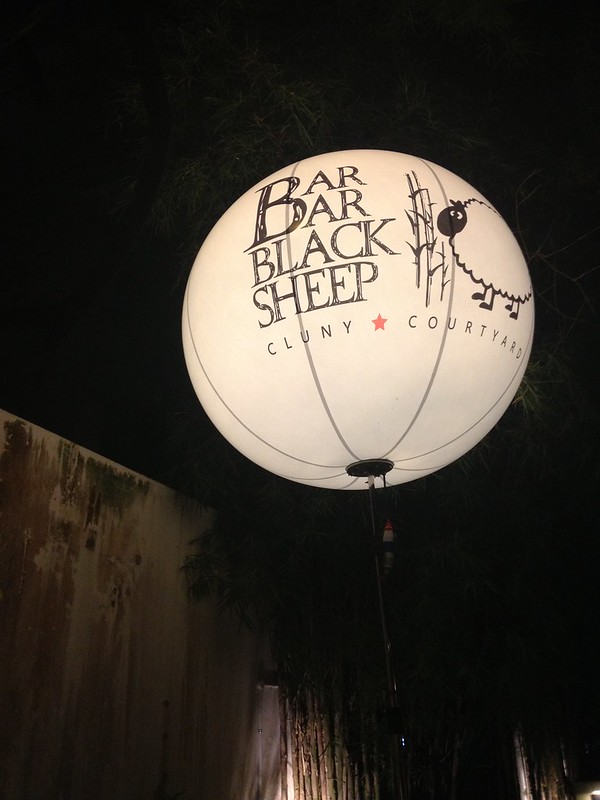 Bar Bar Black Sheep is a new bar/restaurant that recently opened at Cluny Court. I was instantly attracted to the cute and rather quaint signboard that was put up next to the temporary bus stop at Cluny Court. It had a particularly attractive promotion too, at least in this author’s eyes–just $5 for a glass of beer, with no GST or service charge, until the end of October! Bar Bar Black Sheep became a must-go.

It just so happened that 10th October 2012 was the 22nd birthday of our beloved Chief Editor and so we decided to treat the Chief Editor to dinner at Bar Bar Black Sheep. (Chief Editor’s note: Thanks guys!)

The first thing we noticed about Bar Bar Black Sheep was a big screen hanging above the bar with the small “Singtel Mio” sign at the top-right corner of the screen. And they were showing the replay of Arsenal v West Ham match. Football fans of Bukit Timah Campus, we have a base camp. Bar Bar Black Sheep has another big screen in an outdoor dining area with couches. It doesn’t get much better than this.

The menu was interesting because Bar Bar Black Sheep serves Indian, Western and Thai cuisine. Our Chief Editor ordered the Sautéed Mushroom Bacon Cheeseburger ($16.90), I ordered Chargrilled Chicken with Mushroom Cream Sauce ($19.90), and our friend ordered Beer-battered Fish n’ Chips ($16.90). We asked for ice water but Bar Bar Black Sheep only sells Dasani for $1.00 – but that’s quite reasonable (given that the Summit sells the same for $0.90) and they even put a fancy slice of lemon in your glass. 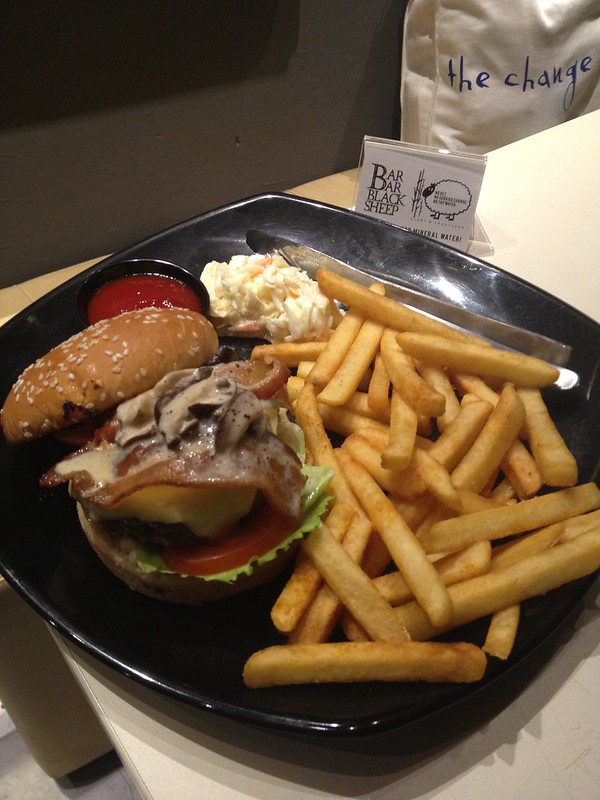 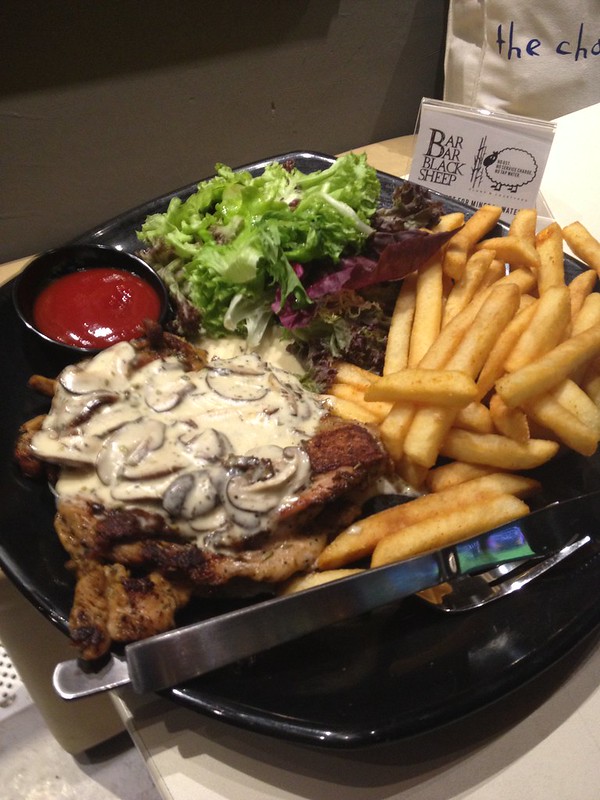 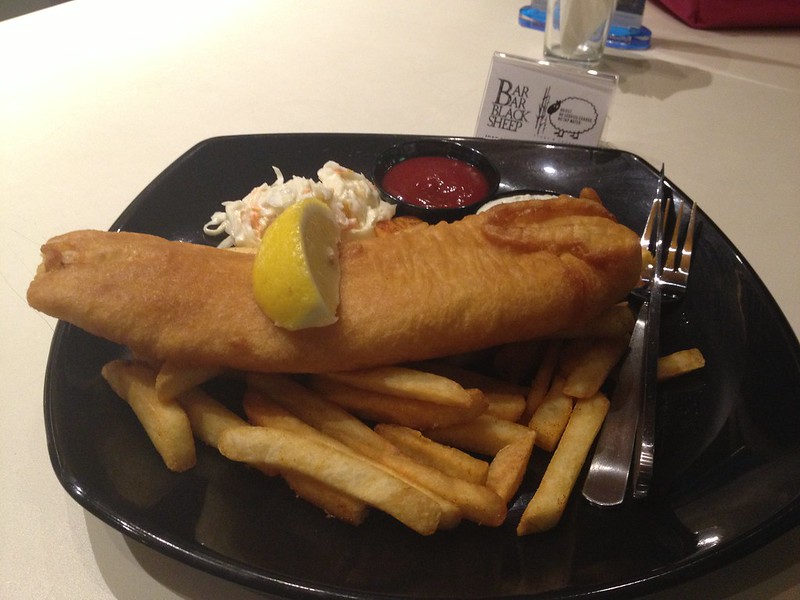 The food came after 10 minutes. All of us enjoyed our food. The Cheeseburger was juicy enough for the Chief Editor (it seems our Chief Editor loves juicy bits). The Fish was fresh and the crust was thin and not too oily, although our friend remarked that the fish was slightly bland. The Chicken was seasoned and grilled very well, and the mushroom cream sauce was a unanimous favourite.

After dinner, we moved on to the main course. Our Chief Editor ordered a Kronenbourg 1664, our friend a Kronenbourg Blanc and the author ordered a Tetley’s Bitter. Each glass, if you remember, was only $5.00. We also ordered nachos just to go along with the beers. 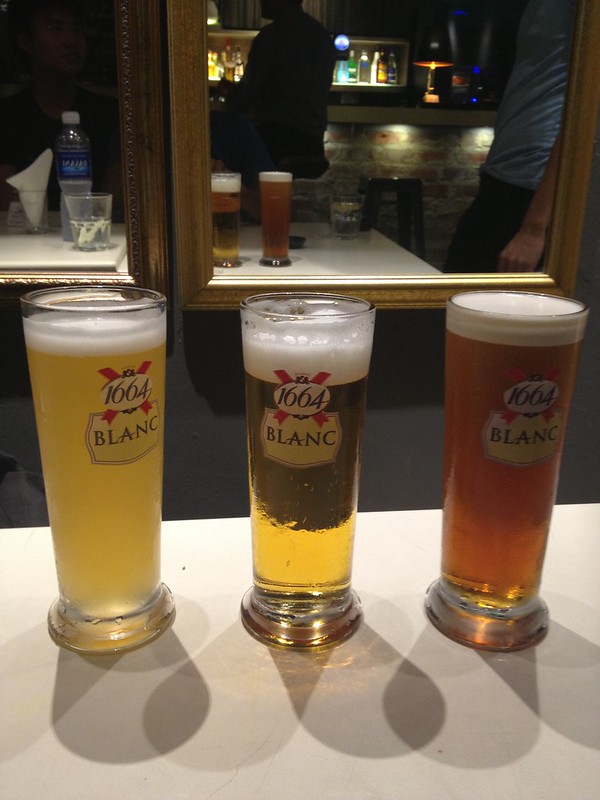 To have some structure, the author will now discuss the beers according to its “manliness” – a scale our Chief Editor used that night. The self-declared most manly drink was the Kronenbourg 1664. It was light and quite bubbly, and tasted similar to some of the Japanese ales I’ve tasted. The Tetley’s Bitter came next on the scale. The author personally thought that this was the best beer that night. It was creamy and only slightly bubbly, and went down very smoothly. The Blanc was a “girl’s drink”, according to our Chief Editor. Perhaps this was because it had citrus hints and tasted sweet. It was also only very slightly bubbly, and its texture was nearing that of sparkling wine. The author would recommend this as a drink to introduce the uninitiated to beer. 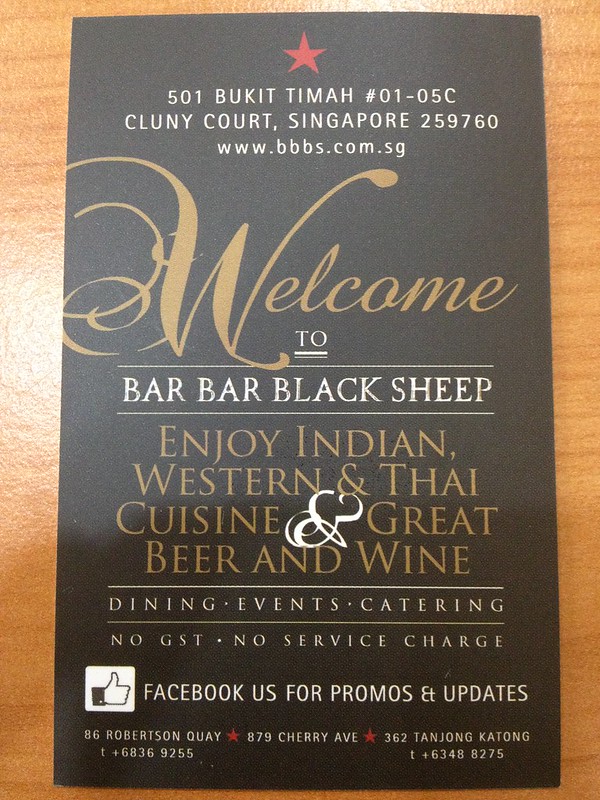 Yes. No GST, No Service Charge!

The total bill was $80 and a few cents, but the Chief Editor’s Citibank card gave us another 10% off food items.

The author would definitely recommend Bar Bar Black Sheep as a place to wind down after lengthy LAWR assignments, discussing directors’ duties or just to escape evidence. 
Just One Party: Celebrating One Year of Justified!