Remember when you used to think JC/Poly was tough?? You know before you descended into the endless despair of legal research, struggling to make sense of all kinds gibberish and madness only to discover hours later that “eh actually this case doesn’t help me at all”

Well LSIRC tried to make your day a little better, hauled you out of the clapham omnibus and brought you to a land filled with donuts, cookies and chin chow. Yes, I’m talking about Children’s Day!!

LSIRC members started out strong, preying on unsuspecting law students who ventured near in the hopes of securing free food. However, law students, though disappointed that they had to pay for the donuts were leaping with joy as they learnt half of the proceeds would go to charity (not really though, they were very unhappy about the lack of free food). 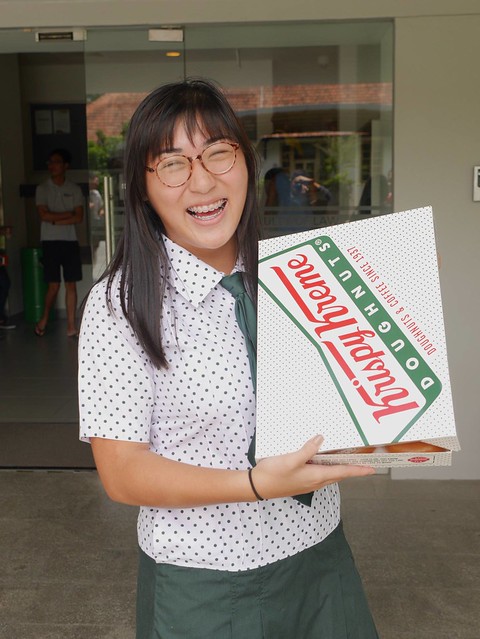 I was told that this is not a Krispy Kreme uniform

The freshies introduced a lovely PG version of Beer Pong, called “Donoghue Pong”. Yes, PG, cause bruh it’s children’s day. Unfortunately, they were informed by school management that they could not use actual snails for the game. This dampened spirits, but they soldiered on with the game, creating a rather sticky mess on the floor (which they later cleaned, don’t kaopeh them please) 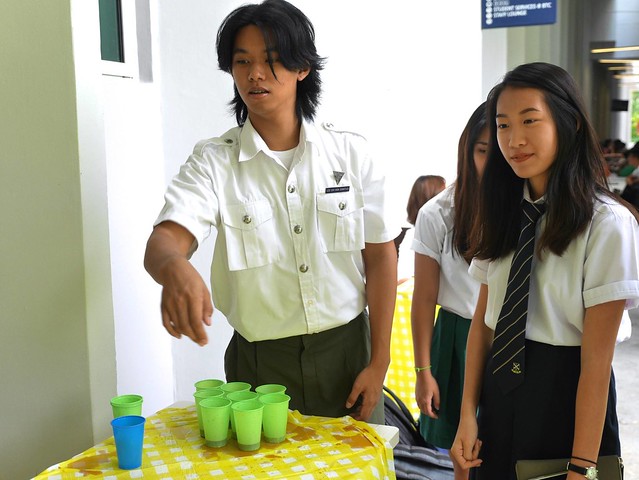 The Torts department will be jealous of that intense look of concentration on his face, which was probably absent when he was learning about the actual case.

However, the freshies efforts were in vain, as resident Law Sku hunk See Tow dominated the Donoghue Pong competition, sending the freshies straight back to the LARC assignment they were trying to escape from. Of course, See Tow has spent years honing his beer pong skills, aided by the years of free beer that law sku has provided (and will provide, stay tuned for Block B party ahem ahem). 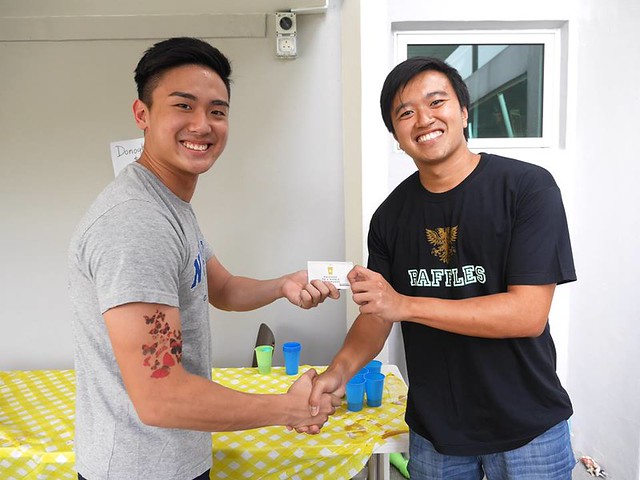 LSIRC President Andre Ong (who is single btw ladies) presenting the $50 dollar Starbucks voucher to See Tow. So ladies, feel free to find See Tow to get your coffee fix. Guys I’m sorry but the offer doesn’t extend to you.

Of course, every event is incomplete without a photo booth, and the crowds gathered to get that perfect polaroid shot, which will no doubt be securely deposited into the crevices of their wallets or behind the covers of their phones. 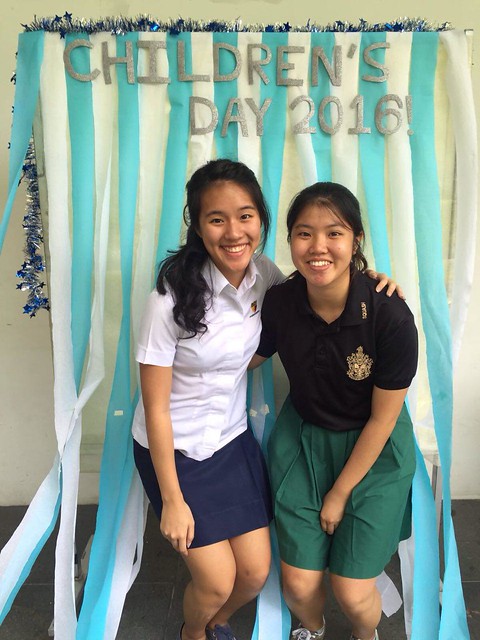 All smiles from the photobooth committee

Of course, every event is also incomplete without people ignoring the photo booth and taking their own pictures, but hey, our campus has some pretty amazing backdrops, so I can’t really blame them. 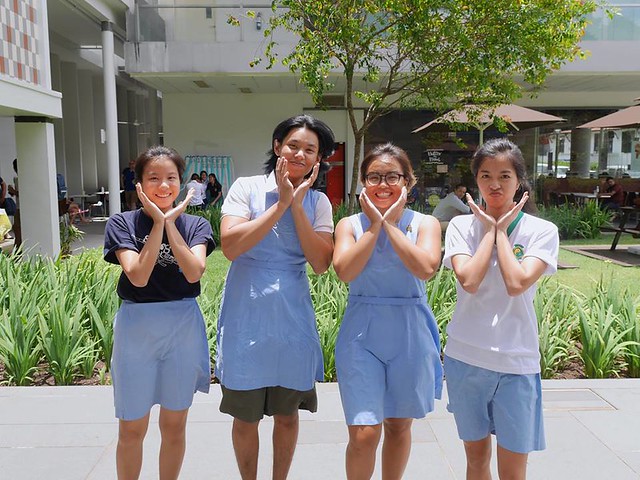 A brave young freshie, testing out the theory that pinafores are more comfortable than shorts. He looks quite happy though, so the theory might be accurate. Or it might be due to the fact that he’s taking a picture with 3 girls, either way, he looks pleased. 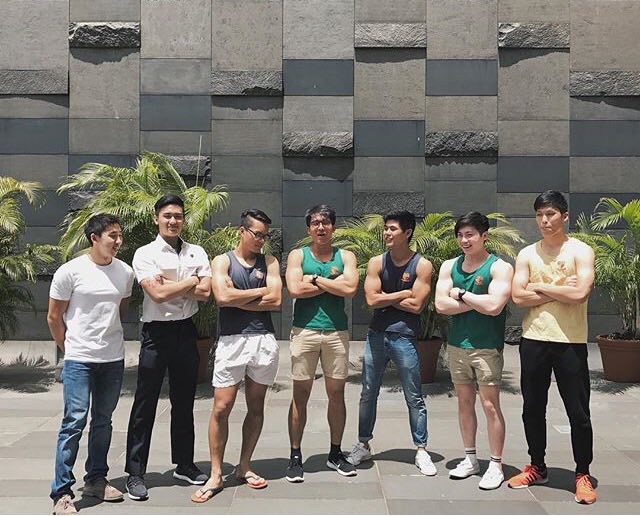 The year 2 AC squad was slightly diminished this year, but they still came out with guns blazing, literally. I was told that the ladies were disappointed that Jevon’s shirt was left on.

All in all, the LSIRC freshies did a fantastic job in raising money for Club Rainbow, which is a children’s charity, and by trending the hashtag #IncomeOrangeAid : “ #IncomeOrangeAid champions empowerment through education for youth in need. I support the cause by standing in my school uniform.
Join me by posting an old school photo of yourself in uniform and tag 3 friends to do the same. For every photo post, Income will donate $1 to the cause. Find out more at http://www.income.com.sg/orangeaid
Post your photo with this caption in full and remember to set your post to public!” 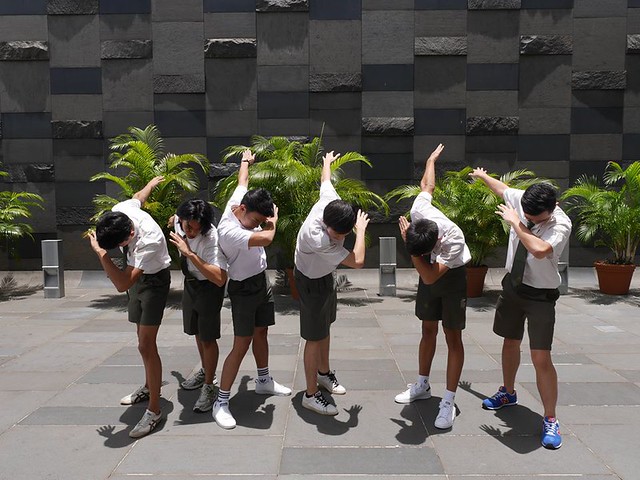