For those who are new to the world of gaming (shame on you), DOTA 2 is a team game, where each team of five players start alongside their throne at opposing ends of the map. The main objective is to take down the enemy throne with superb teamwork and objective aggression.
Law team (Team SEEDZ) fielded the returning champions of last year, all ready and hyped to hit yet another home run this time around. Throughout the whole IFG, LAW constantly surprised the enemy with challenging drafts and superior mechanics. However, in what might be a minor disappointment, Underlord was not picked at all in this IFG. (maybe law-med? Hint hint)

Day 1-Best of One
Law team’s participation in day 1 was more a formality than anything else. Team SEEDZ “Shock and Awe” operation left ruins in its wake. The judgement was delivered, the message clear and simple: One does not simply win against Law.
LAW v USP (1-0)
LAW ate USP for breakfast. Faceless void played by Cleon topped the position in net worth throughout the game, becoming a walking disaster for USP throughout the whole match. A series of perfect initiations by Void’s chronosphere into Sand King’s Epicentre ended LAW’s warm-up. 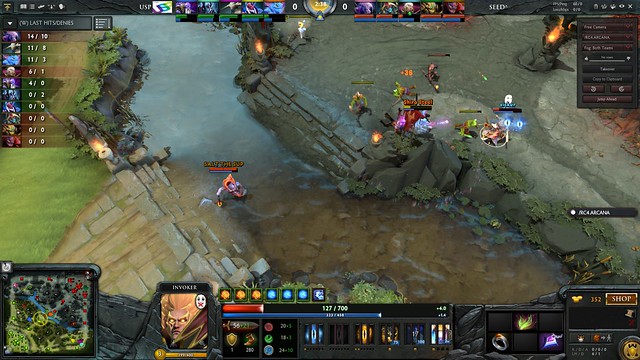 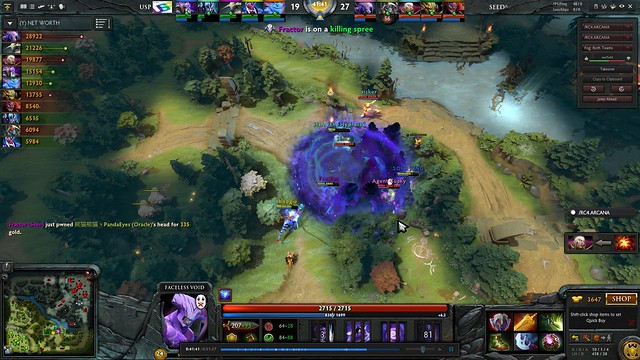 This is the stuff nightmares are made of.

LAW v MEDICINE (1-0)
LAW rained judgement upon MED’s battered bodies until it became sufficiently clear that MED just did not have the skills to save themselves from the dire situation. Cleon’s Sven dominated the early game with a quick echo-sabre pickup, creating space for Marcus’s Meepo to flash farm globally. As soon as the cancerous Meepo came online, MED realised the match was at the terminal stage and called it quits for an unprecedented 18mins GG.
LAW v COMPUTING (1-0)
As expected, the arm of tyranny stretches across many faculty. Computing was not spared from the early pick off as the notorious space cow went down against the barrage of disables. Early game kills were netted with skilful body blocking by Panda Eyes’ Vengeful and long range sniping by Mark’s Elder Titan Astral Spirit. As Law unleashed the Juggernaut-Clockwork Combo, SDE was completely obliterated beyond recognition. Realising the devastation, Computing acknowledged the prowess of Law-senpai and withdrew at the 26mins mark. 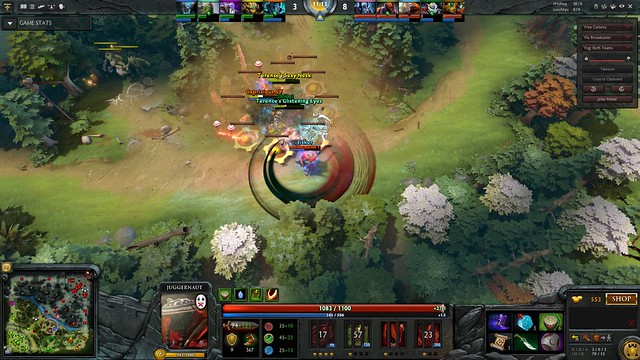 Picture 3: Dead beyond a reasonable doubt.

LAW v SDE (1-0)
SDE made the similar mistake of giving LAW their much prized Meepo, played by Marcus. Little did they know about the horror facing them until the Meepo army came knocking on the door. The strong crowd control by LAW and silence gave SDE no room to manoeuvre. Nothing much can be said as, in an almost identical fashion as with MED, fat Sven and cancerous Meepo marched down mid to an easy win. 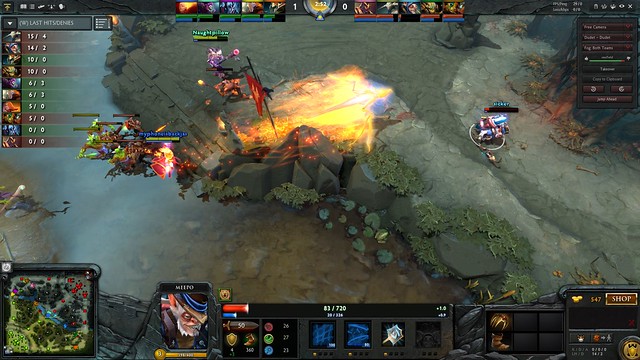 Sick dodge by an even sicker 6.5k MMR Meepo player

With a glorious perfect score on Day 1, the guys returned home to rest for the greater challenge the next day.

Day 2-Best Of Three
LAW v ENGINEERING (1-2)
Shikai’s Lone Druid played remarkably well early on, escaping ganks, netting kills and creating space for the farming Naga Siren. With the standard Radiance build on Marcus’s Naga Siren at the 15mins mark (Yes, take some time to digest that fact), Law was ready for the winning Pushing-Strat. Nobody could escape the siren’s song as it came crashing down upon the dire, sealing the deal for an early victory. 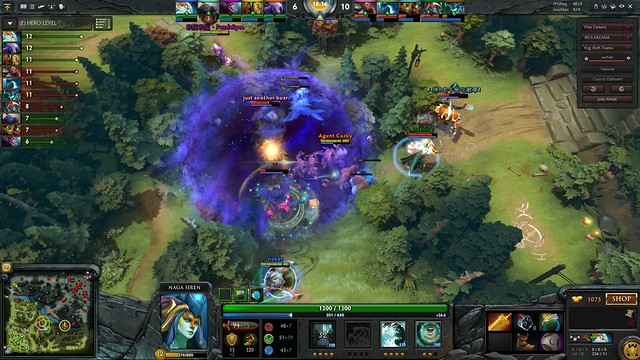 Feel the burn. Here, Elder Titan and Oracle are faced with the difficult choice of dying now or dying later.

Things took an unexpected turn as LAW struggled from the start of the next match, making a series of unfavourable trades that resulted in an unstoppable death ball by Engineering. As Engineering rolled down the top lane, the early pressure on the objectives were too much to handle and LAW defences slowly chipped away. Cleon’s Phantom Lancer attempted to split-push with limited success, ultimately having to return back for the defence against the throne rush. Despite LAW’s valiant efforts, Engineering’s Morphling and Juggernaut were too fed by then and they stomped high ground 30mins into the game. 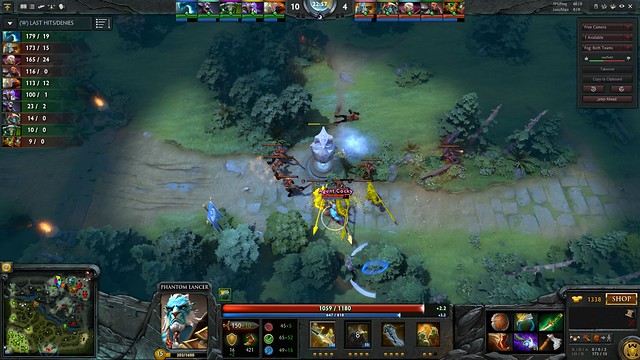 RAT DOTA at its finest.

LAW v USP (2-0)
LAW was so confident against USP that they not only decided to allow the dazzle-Huskar pick to go through drafting but also trolled their way into a few deaths to kick things off. Despite the apparent slow start, Mark’s Legion Commander still manage to farm an 8-minute blink against overwhelming odds, opening up the map for her successful early ganks. Coupled with the roaming Riki and Broodmother, USP was forced to play defensively and slow their item progression by purchasing wards. Meanwhile the five-men geomancer was flash farming the entire map. Finally, a 6-slotted Meepo emerged from the jungle and decided it was time to make the USP cry. 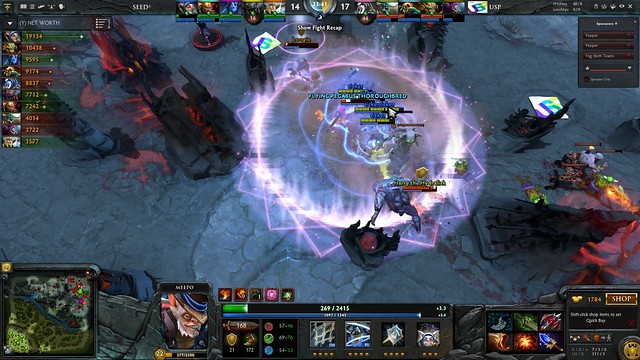 1 v 3? No problem. Meepo deciding it was time to turn up the heat.

LAW blitzkrieg strategy punished USP so hard that USP’s throne decided enough was enough and self-destructed 16mins into the game. The game was a massacre, with LAW forcing the initiations and building the momentum right from the outset. The high tempo was too much for USP to handle, as Chaos Knight and Zeus dished out tons of damage in the teamfights teamwipes. 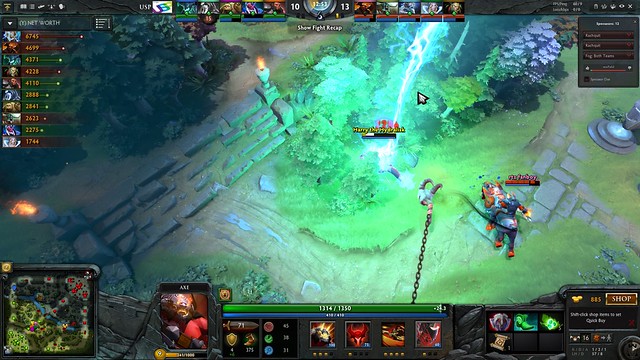 Unfortunately, we could not take a complete team picture but since it was the same players fielded as last year, this would have to do. 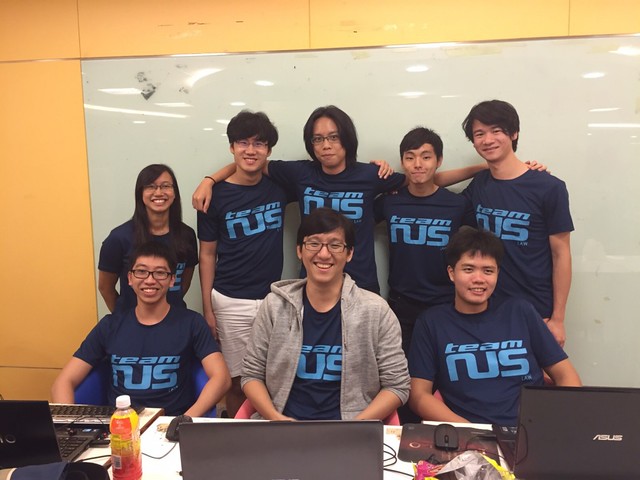 LAW finished third overall after their two days of hard work and general trashing. It is clear that LAW Dota 2 is still a force to be reckon with, and the guys are ready to wreck yet another round of havoc at the upcoming LAW-MED DOTA 2 arena.
For those who think they have a shot at joining the heavyweights and continue our legacy, here is your chance. Special thanks to Rachel Koh for her assistance in the production of this article.
As a side note, DOTA nerf Meepo please.