Last Saturday, members of the Law Students International Relations Club (LSIRC) as well as students from all over NUS Law came together to welcome this semester’s batch of foreign exchange students. All in all, it was a fruitful evening, both fulfilling (from all the food perhaps!) and culturally enriching. Click on through to read on about what we did that night!

First of all, what is the Exchange Exposure?

The Exchange Exposure event is a relatively new initiative, having only been started last year in 2016. It aims to let students interact with our foreign friends and learn more about each other’s cultures, beliefs and worlds. As an event at the start of the school year, as well as requiring no sub-club memberships, it serves as a free and easy way for students to network internationally and also as a precursor to the Exchange Buddy Programme (EBP).  Since one of the goals of LSIRC was to, after all, foster international relations (it’s in the name), the EBP serves as a great and meaningful way to do so while still getting to know other fellow NUS Law students better. When I joined the programme last year, I got to know various exchangers, some of whom I still keep in touch with (law school is busy, for all of us) but also my seniors and even professors. In a way, perhaps the name is right on the money. A mysterious hand points excitedly at the event location. I couldn’t animate this so imagine it shaking.

Introductory segue aside, for that night, we had a simple plan – where else to bring a fresh batch of Law students from all over the world but to experience some of the food Singapore is so well known for? And where else can we possibly fit that many people but Lau Pa Sat, one of the most historical places to dine?

Just in case that didn’t work out, we also had plans to go explore the nearby area afterwards. Aside from trying some of the local drinks, various other activities were happening in the area, such as the Singapore Night Festival. Nonetheless, there were at least 20 drinking places listed out in the group chat, but you know how law students are. In either case, after we all went to Lau Pa Sat (and occupied an entire wing of the place), we broke into small groups and had some interesting dinner conversation. Being Law students from all over the world, it was quite enriching to learn more about other jurisdictions and how they operate, or even just how their universities run on a daily basis. Each university and each country seemed to have their own method of teaching which differed vastly from our own classes. Beyond that, just the study of civil law versus common law, or the study of law in mixed jurisdictions was really fascinating. Even the place itself was interesting to many of the exchangers, with its bells going off every 15 minutes and occasionally interrupting our conversations, a remnant of days long past.

The exchange students also got to try out some of the local food. With so many attendees, I’d bet every stall was represented. The exchangers were especially interested in Louis’s giant naan (which was nearly the size of the whole plate) and everyone got to try out the satay and seafood from the stalls outside.  And of course, for many students, it was their first contact with Tiger beer. Reception was mixed, but surprisingly, generally positive. After dinner, we opted to skip drinks and head down to Bugis, where we managed to catch some acts in the Aliwal Arts Night Crawl. The Aliwal Arts Night Crawl was a great introduction to the local arts scene, with various disciplines of art, music and dance being represented. Held in the ever-so-hip Kampong Glam, the area was bustling with fellow art-lovers alike. While some of the exchangers left to find their friends from other faculties (yes, there are medicine Exchange Students), the rest of us waited stage-side, Tiger in hand to wait for the next performance.

And what an interesting performance it was! We managed to catch NADA x Bani Haykal, a debut collaboration between local music  NADA, named after a group formed way back in the 1980s and Bani Haykal, an experimental, multidisciplinary artist. As Rizman writhed about on stage to the visceral and surreal tunes of the performance, dressed completely in white and decked out in fairy lights, it was almost like he was in a trance. Also in a trance was Philipp, who described the performance as intriguing and mesmerising. Thanks to his costume, the way the coloured light strobes reflect off him really helped add a layer of mysticism to the whole show. And to be quite frank, I didn’t really understand what was going on half the time, but hey, it was cool to watch. While some students opted to go explore the local nightlife (we had a guestlist for Altimate, after all) we brought the rest to have local desserts at Ah Chew Desserts in Liang Seah Street. The queue for seats snaked out all the way onto the road so we were lucky to have been able to find seats for all of us. Aside from local chinese desserts, the place also served various desserts from Hong Kong as well, such as steamed milk pudding. The restaurant was also filled with various antiques, scrolls and plaques, which really made us feel like we were actually in Hong Kong.

While I didn’t get anything (I’m just a poor boy, I need no sympathy), I asked the others what they thought of the desserts they got. Since it was 11pm, everyone opted for some type of cold dessert. Some of the exchangers also got to try Durian for the first time that night! Xiaoyu ordered the Durian Mango Sago with Pomelo, which is every bit as heavenly as it sounds like. Perhaps we’ll bring them all to eat Durian on the next outing?

All in all, it was a great night (I know I’ve used ‘great’ a lot this article, curse my vocabulary, but it was!!) and personally, I’m really looking forward to the next one. Hopefully by then, some new blood – yes, Year 1s, I’m referring to you – will be ready to join us and come along on the next trip. Until then, company law awaits me. Or I need to pay my notes some company, whichever closer is more terrible. 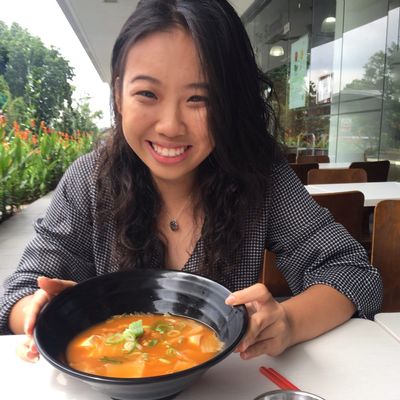