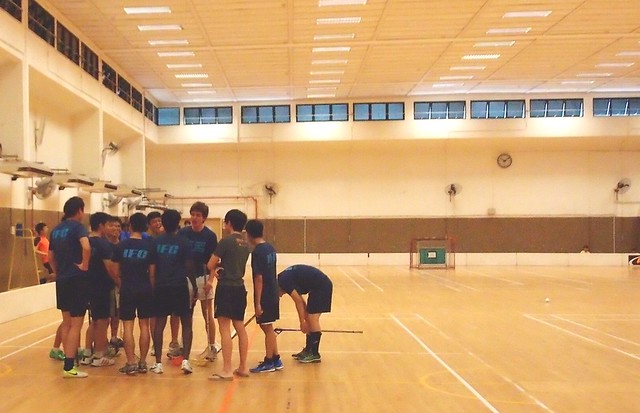 Sunday (15th Sept 2013), our athletes from the floorball team marched on to Kent Ridge to vie for the highest honours in the IFG semi-finals. Both the men’s and women’s teams fought valiantly, their courage and skill unparalleled within the four hallowed walls of the sports hall. Despite the overwhelming odds — for the other faculties had the home-ground advantage, and the winds were simply not blowing in our favour, our teams managed to clinch a bronze medal in the women’s category, proving once and for all that when it comes to balls, sticks and nets, we know what we’re doing.

The guys battled Science in the semis and won at losing with a scoreline of 4-0. They then faced off Engineering in a match which lasted till overtime where the ball somehow materialised within our goal, losing 1-0.

The girls team were off to a rough start against Engineering having conceded 2 early goals, but fought back to end the first half at 2 all. The match eventually concluded 2-4 to Engine after a highly contested second half. In the bronze medal match, a determined offense sailed through the firewalls of computing to clinch the medal 4-1.

A quick guide to floorball:

For uninitiated, IFG floorball is played in two halves of 10 minutes each. The clock starts at 10:00 and winds down to 0:00. The aim is simple: To get the ball into the opponent’s goal using only the sticks you have. For the guys’ matches, a barrier is placed in the centre of the goal to make it more difficult to score, presumably since guys are usually better with sticks. 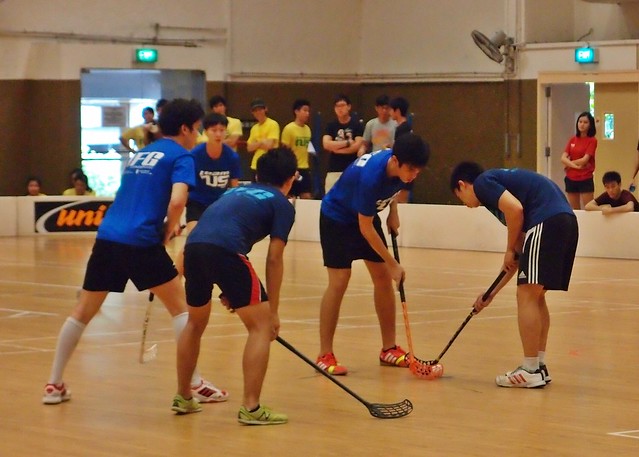 Any conflict where the rational meets the empirical is bound to produce explosive results, and this match was no exception. Law was quickly put on the receiving end of Science’s evidential onslaughts. Within a minute, it appeared that Science had scored, but the referee was quickly convinced by our coherent arguments that it did not count.

Having fought off an earlier offence, Law then turned the guns back onto their opponents. A demanding tackle made by centre John Cheah marked the start of a solid salvo of shots taken by Law at the weaknesses of our opponent’s arguments. Though cracks began to show in Science’s defensive structures, most of Law’s claims on goal were sadly unsuccessful.  At 2:01, a beautiful lob shot by John from the midfield soared through the air before landing squarely on the crossbar. 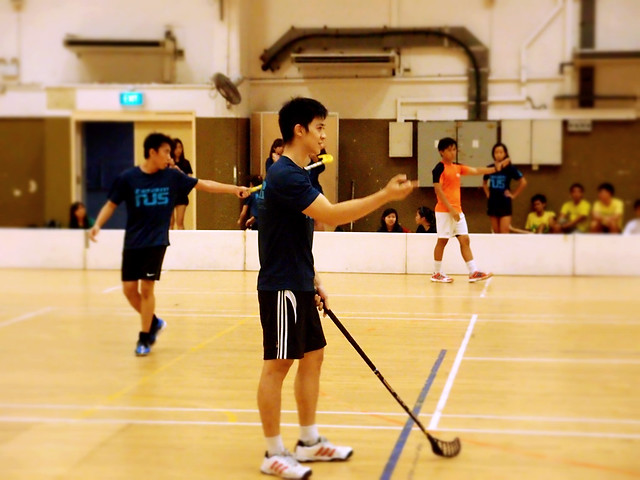 It was unclear if Science did capitalise on the experimental results from Law’s repeated attempts, but moments later at 1:19 they somehow managed to guide the ball into our goal, presumably having finally worked out the specific trajectory and parabolic formulas for the perfect shot. 0-1.

And as you know, once you know the formula, you need only to apply it repeatedly. With the match resuming in the second half, Science was aggressively trying to reproduce their previous results. Despite the fierce defence put up by Law, Science was able to score 2 more goals at the 7:00 and 6:49 mark. 0-3. 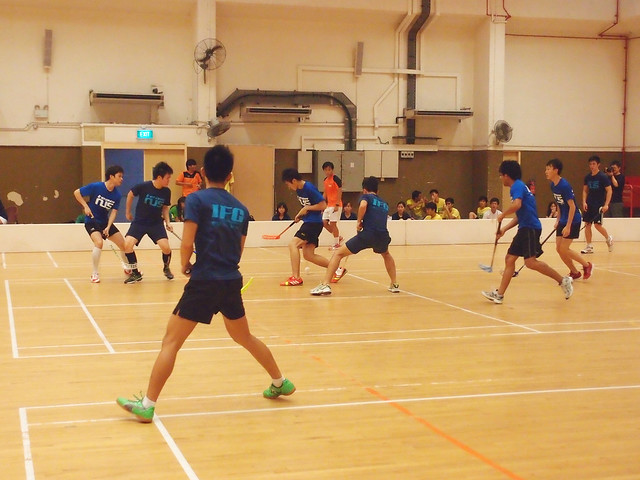 If you think a group of guys chasing a small white ball seems weird, then you miss the point of the game. It’s not just about the balls, but the sticks too.

Not one for that obscure notion sometimes known as ‘giving up’, team Law persisted in their line of argument, and defined what tenacity was by mounting an aggressive counterattack. For the last 5 minutes of the game, Science found itself on the receiving end of attack after attack. If there ever was a team that seemed discouraged, it was not team Law.

With 1:08 remaining on the clock, however, Science again managed to decant our defence and score another goal. Not that it mattered with such little time remaining, but, then again, not everyone is as sensitive as Law to immaterial facts.

The second match of the day saw our Girls’ Team against what could’ve been the only 10 girls in the Engineering faculty, and took on a substantially different slant. Following the landmark decision of the Court of Appeal in Spandeck Engineering v DSTA…suffice to say most of us are more comfortable dealing with Engineers thanks to Spandeck. But then again…alright you get the point.

The match started off to a lightning offence by Team Law which resulted in a near miss barely 20 seconds into the match. The team then put up an impressive show of floorballery for the next 3 minutes, with a brilliant saved made by goalkeeper Hannah at 6:39 which almost led to a goal 10 seconds later on the other end. 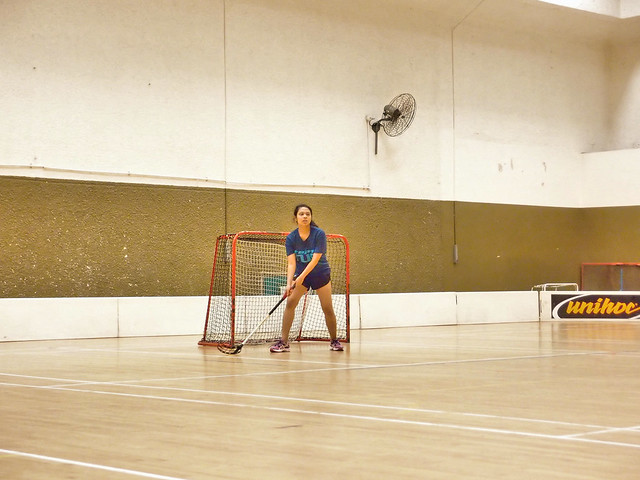 Goalkeeper Hannah in a defensive stance

But Engineering was not one to be trifled with. With our team showing that a goal in this match was indeed factually foreseeable, the rival team brought the game to the next stage scoring by two successive times at 5:45, and at 4:51 off an earlier shot deflected by our relentless goalkeeper. 0-2.

Capitalising on her momentum, the forward then mandatorily managed to steal the ball with a demanding tackle in the midfield, and scored a magnificent goal from the right wing to equalise.

So it was that the second half began at 2 apiece. Engineering was off to a good start, presumably having been able to use the half-time break to re-look their schematics, and quickly managed to score twice within the first two minutes. 2-4.

The burden then fell on Law to deliver convincing reasons to negate this lead. Led by the energetic defender Jean, the team placed constant pressure on the foundations of Engineering’s defence. From 8:00 to 4:22, however, the opponents oscillated between time-wasting, and even more time-wasting, passing the ball back and forth within their own areas to deny Law any means of intermediary inspection. 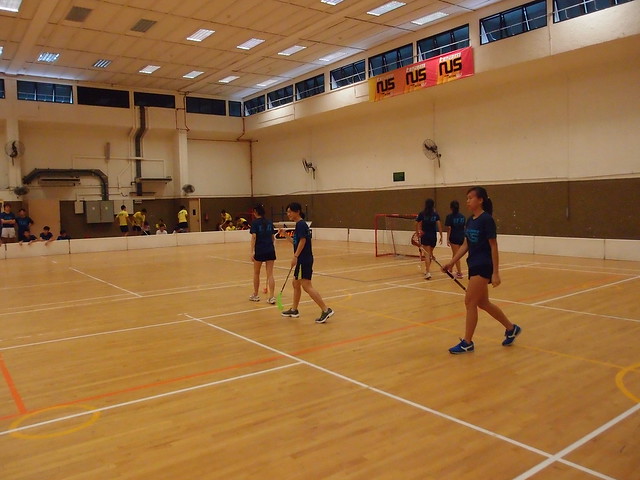 The team takes a breather in the meantime

With 2:00 left on the clock, a beautiful shot from the midfield by team Law was, sadly, saved by the opposing keeper. What transpired next, however, boggled the mind and stretched the realms of reality (to borrow a phrase from our learned courts).

The opponent keeper reached out her hand to pick up the ball. It was clearly an intentional foul, and as we know intentioned actions are far more culpable. In a similar foul that occurred within the penalty area in a previous match between Arts and Computing, Arts was awarded a penalty. Here, however, the referee saw fit to call, instead, for this: 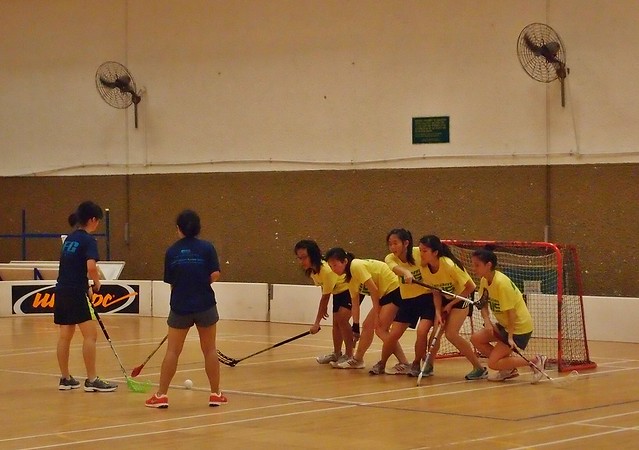 Floorball or Mount Rushmore? You decide.

It was unclear what policy reasons influenced this decision. Suffice to say, it was difficult for even our best players to sneak a shot past this carefully Engineered defence.

Baffled, the team pressed on for the final two minutes in search for another chance to score, but it was not meant to be, and the Girls team was headed for the 3rd place playoffs. Final scoreline: 2-4. 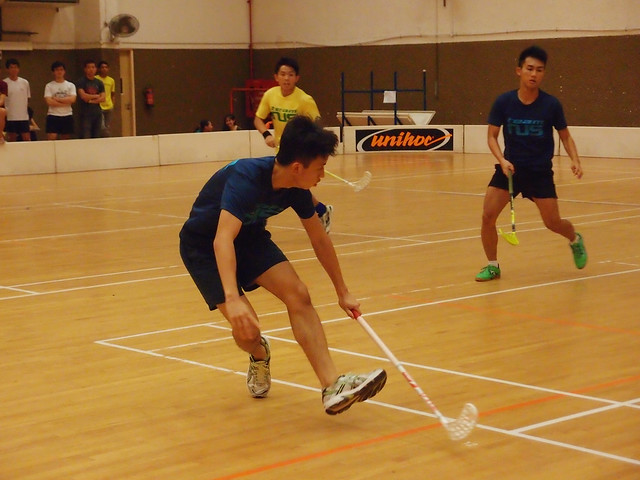 The guys’ team was, not surprisingly, eager to avenge the girls’ team’s defeat at the hands of the Engineers. This match took off in full force and proved to be the most exciting thus far. At 9:30, Team Law’s pass was intercepted in deep by an opponent forward, who promptly redirected it back into the goal.

The next few minutes were filled with action. At 8:45 a shot by midfielder John nearly sneaked into the post, and opponents quickly counterattacked and forced a save by defender Desmond. Barely a minute later at 8:00, a shot by Law forward Haziq was but slightly off the mark. 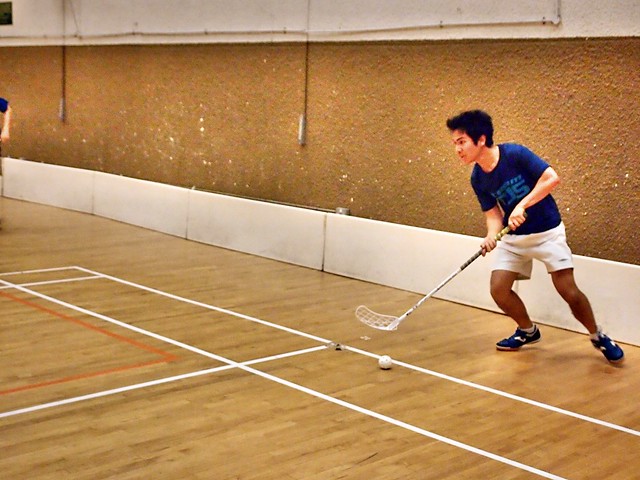 Haziq sizes up his shot

Team Law was then put on the defensive by the mechanics of the Engineering’s chemically electrified attacks. Defenders Harold and Asri rose up to the challenge and repeatedly produced astonishing saves at the 6:30, 5:00 and 3:00 marks, setting the stage up, finally, for a long shot from John at 2:45 which snuggled itself into the left corner. 1all.

With the momentum now on our side, the team pressed the attack with midfielder Ervin taking a crack at the goal from centre court, and winger Will trying a clever lob shot from a distance. These attempts, sadly, missed by a tangent. 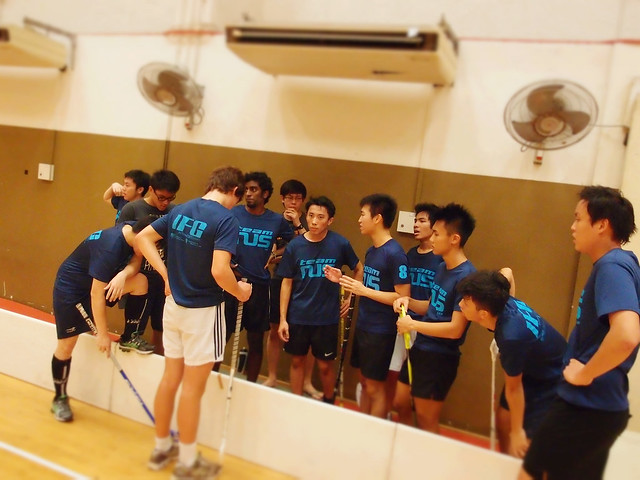 The team discusses their strategy during the intermission

The second half proved as exciting as the first, with both sides trying fiercely to gain the advantage. Team Law played beautifully, dominating the half through their tight defence and pinpoint passing, but were unable to convert the many chances they created. As it were, the Engineers had done their calculations well.

The match ended 1-1, which, in some circumstances, would have led to both sides winning the medal. Unfortunately the IFG was not such a circumstance, and with the limited budget allocated only one set of medals could be made. There was to be one winner, to be decided thus: extra-time, 3 minutes, sudden death. 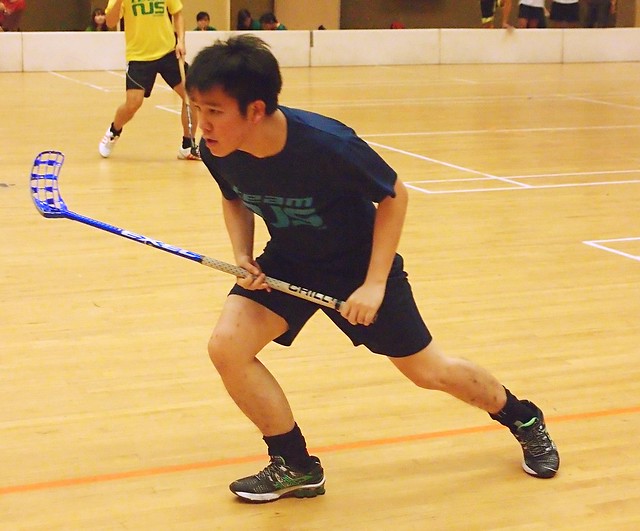 The atmosphere could not have been more tense. Knowing that a single goal would end it all, both teams continuously tried to land the golden goal with a variety of different shots at varying range. One Engineer’s shot at 2:42 bounced right off the top left corner of the post, probably because he forgot to account for the uncertainty in that equation. At 1:14, another more determined effort produced a critical save by Law defender Harold.

With but seconds on the clock, the ball somehow appeared within team Law’s goal. It was not exactly clear if the shot was made in time, but it was not contested, and the referee gave the match to Engineering. 4th place for the law faculty. 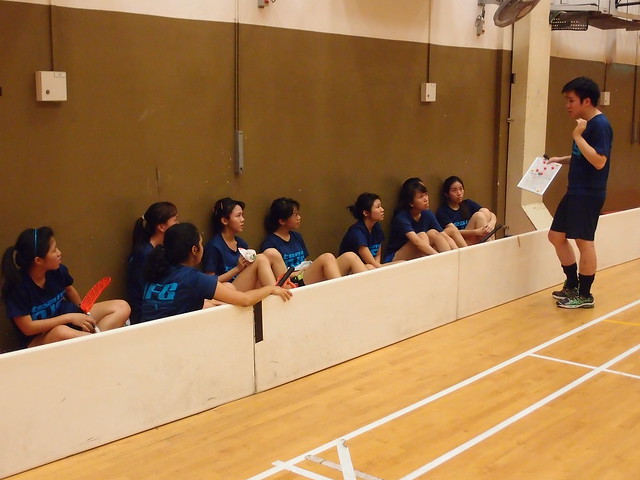 The final match of the day saw Law up against Computing for the bronze medal. As you know, bronze medals won by girls’ teams are a big deal in Singapore. This clearly meant a lot to us.

And the match proved no disappointment. Law went off to a verbose start, creating multiple opportunities which almost led to goals at 8:49 and 8:40. Pressing the offence was, again, Forward Xue Kun, who at 5:35 took the ball around the opponent’s goal before her shot was marginally denied by the crossbar.

The breakthrough finally came at 2:35, where Jean’s mid-range shot from the left side found the back of the net, proving that it was time for Computing to debug their firewall.

The second half saw even more action. With 8 minutes left in the game, a tussle erupted in the face of Computing’s goal. Law was able to capitalise on the confusion there to score from very close range. 2-0, and a comfortable lead into half-time.

The second half saw Team Law continuing to dominate the game. At 6:30, a shot by Delise expertly navigated through the legs of one defender but was saved in a last ditch effort by Computing’s goalkeeper. Nevertheless, Delise recovered the ball and scored barely a few seconds later. 3-0. 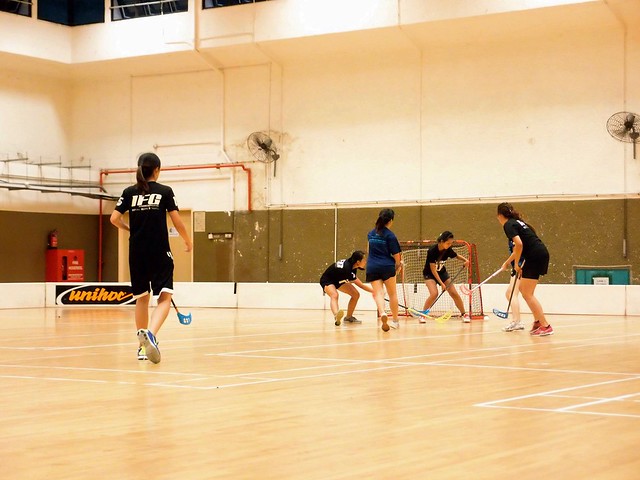 Putting the pressure on our black jerseyed opponents

Computing continued to put up a determined fight. At 4:09, one of their Forwards coded up a coordinated attack from the midfield which put her 1 on 1 against Law’s goalkeeper. Despite the latter’s efforts, the former managed to score. It was unclear if a backdoor Trojan was used in this process.

Computing’s goal seemed to provide them with excess RAM capacity. Reinvigorated, they continued to hack at Law’s defense. But team Law was more than ready. Our choice of jersey colour seemed especially apt, for Computing was unable to get past the Blue Screen of our defense.

The game eventually ended 4-1, after Jean scored again from a ‘free-hit’ awarded by the referee. Considering how no such penalty was award in the previous Girls’ match, it seems here that the referee was more predisposed to mechanics than C++.

So it was that the floorball team brings glory to the Law faculty by clinching the Girls’ team Bronze in the IFG. Congrats and kudos to all our athletes!